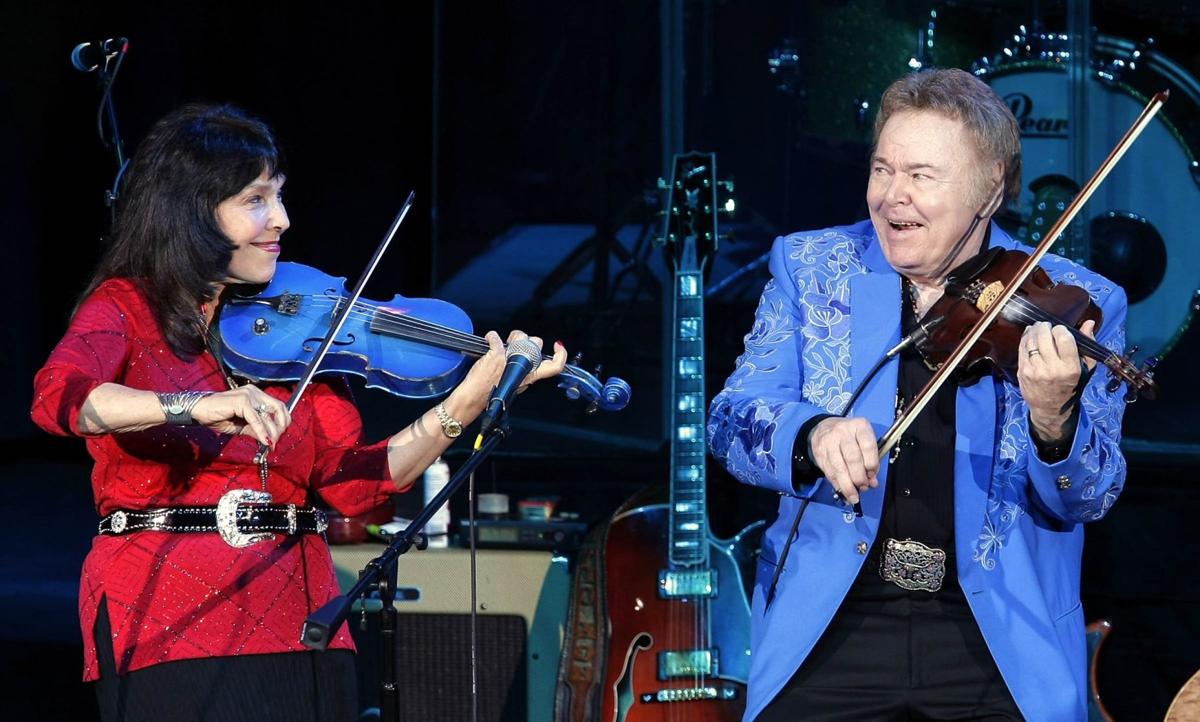 Jana Jae and Roy Clark are among people with Oklahoma ties who shared their life stories during Voices of Oklahoma interviews with John Erling. Tulsa World file 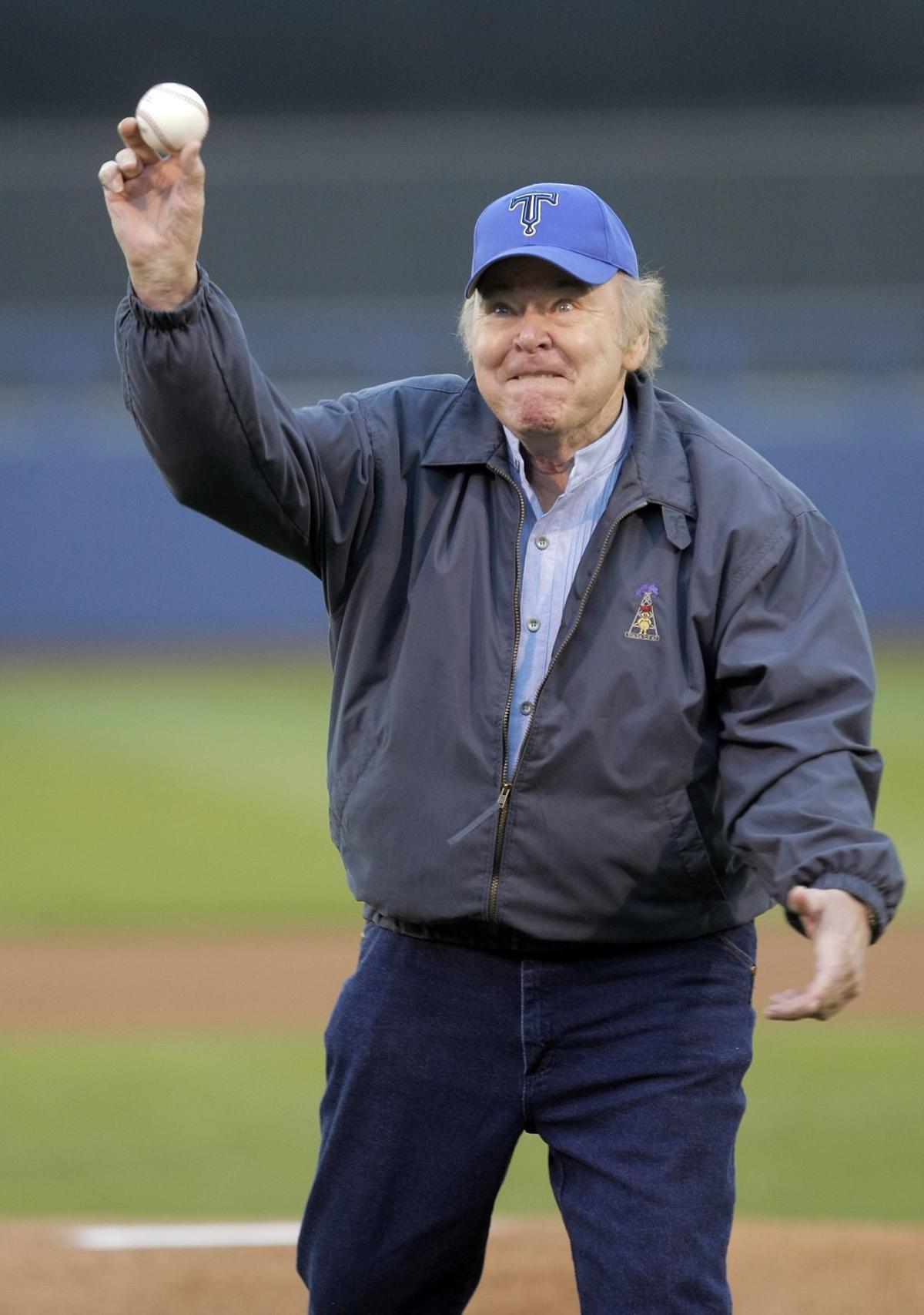 Roy Clar, who threw out the ceremonial first pitch before a 2012 Tulsa Drillers opening day game, is a lover of baseball. MIKE SIMONS/Tulsa World 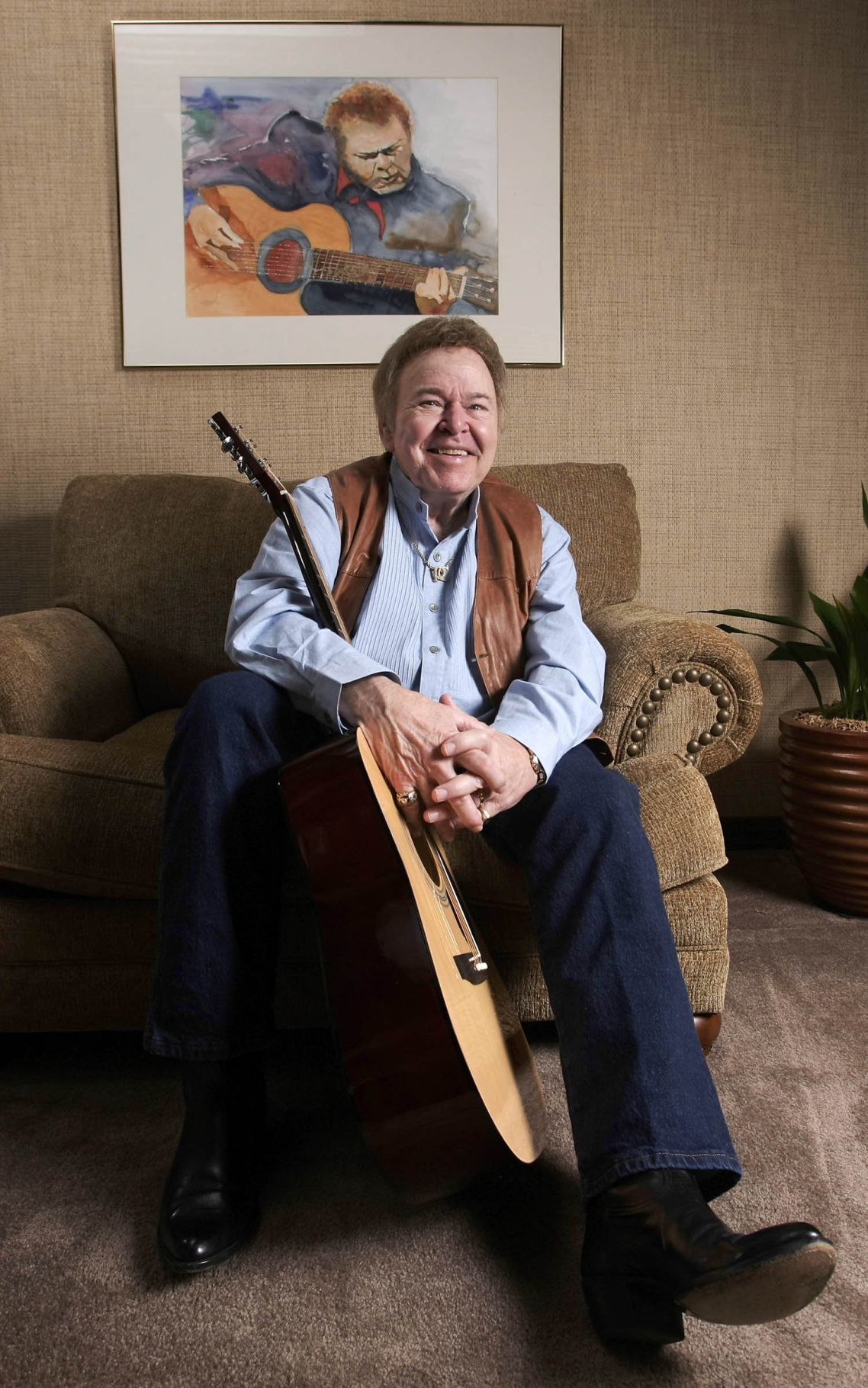 You can still experience what it’s like to chat with country music legend Roy Clark by accessing an audio version of his Voices of Oklahoma interview. Tulsa World file 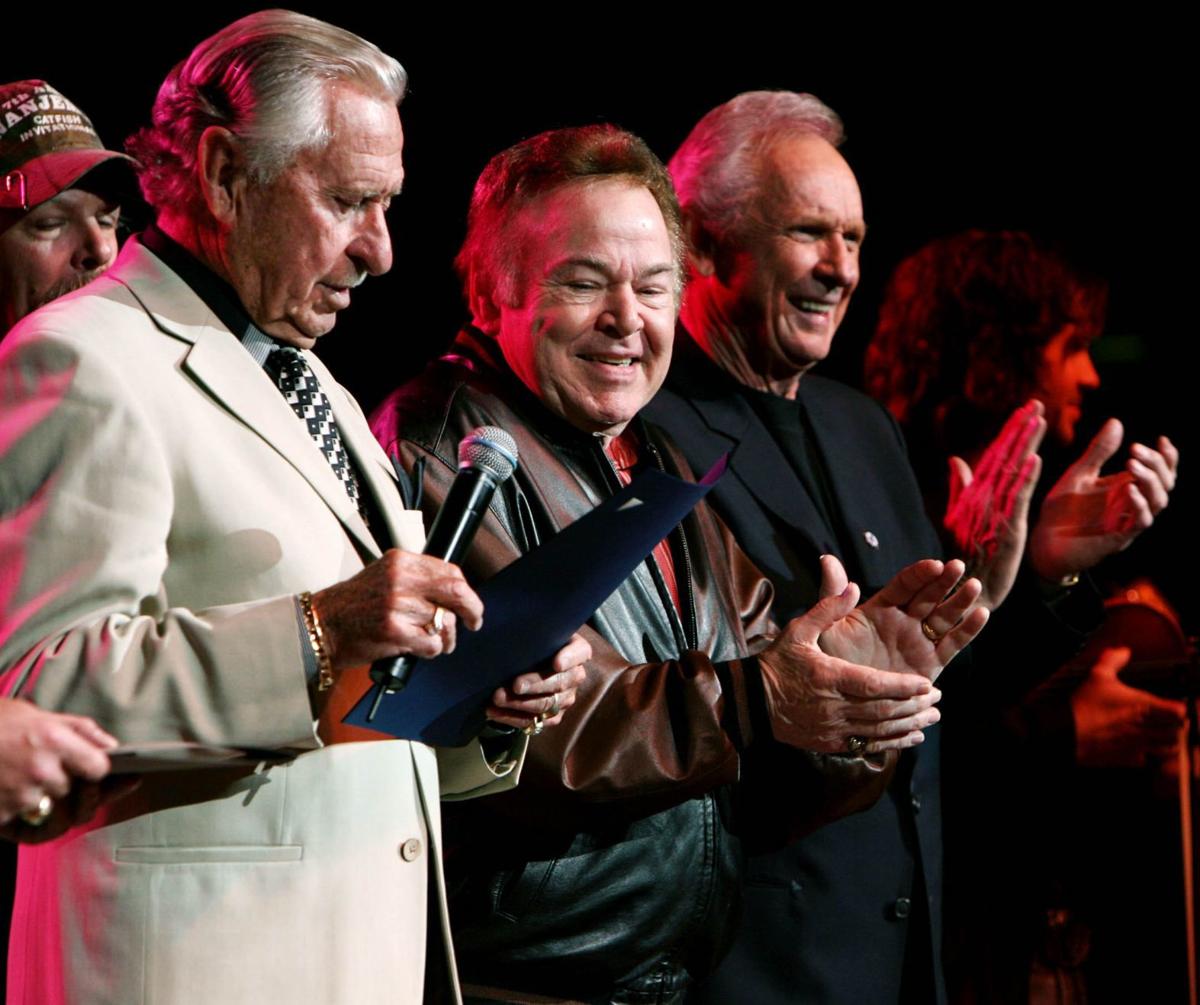 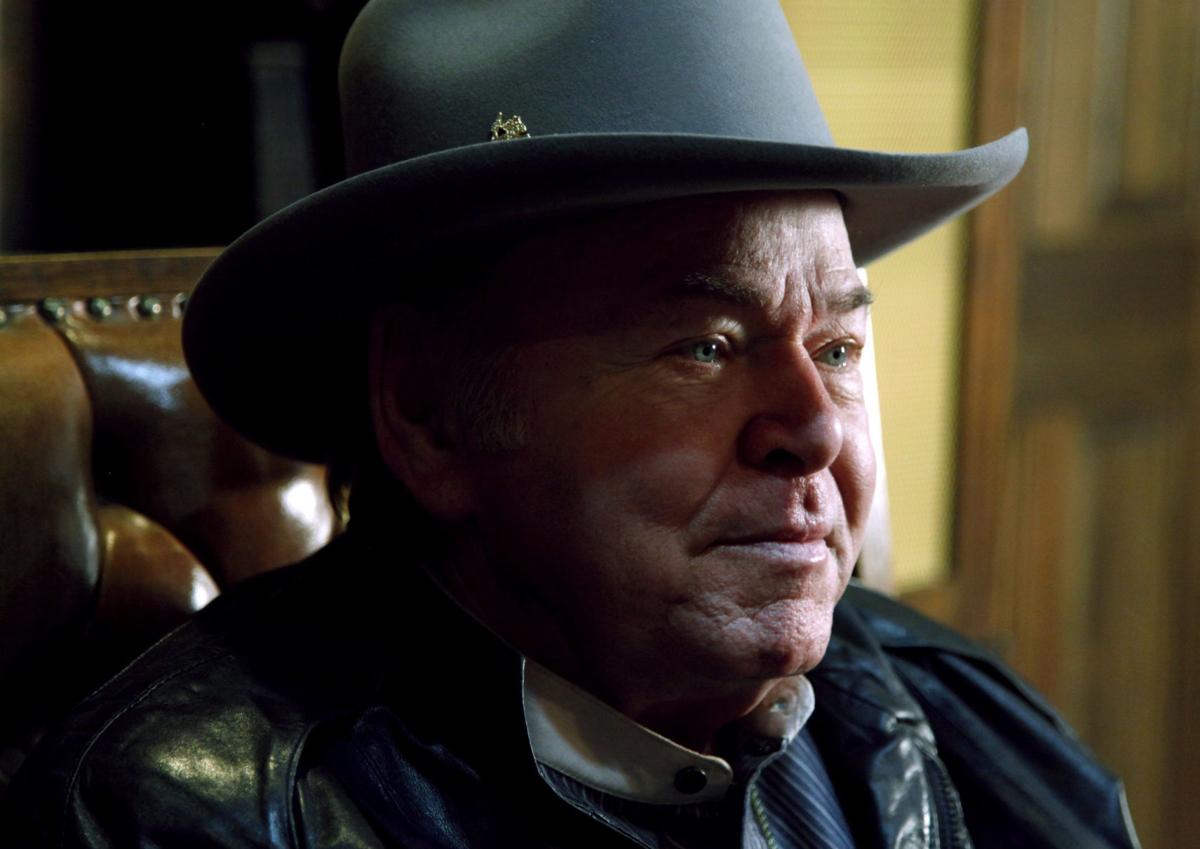 In this March 27, 2013, photo, Roy Clark smiles during an interview at his Tulsa office. The “superpicker” died in 2018. John Clanton/Tulsa World

If you’re weary of the same old, same old entertainment options while sheltering in place, here’s one you probably haven’t considered:

You can hear some of the most significant and/or interesting people in Oklahoma history telling you their life stories, just like they were sitting in your living room.

Who do you want to invite into the living room? Take your pick from 191 interviews (conducted by former KRMG radio host John Erling) that so far have been posted to voicesofoklahoma.com.

Access is free. You can go to the site to seek out interviews by name or topic. Among storytellers: Eddie Sutton. Wanda Jackson. Wilma Mankiller. Boone Pickens. Barry Switzer.

Go exploring and see what grabs your attention. There are interview transcripts on the site if you prefer reading, but listen to the audio to get the complete experience.

This is not the first time the Tulsa World has written about Voices of Oklahoma, but some of you out there may be reading about it for the first time and others may appreciate a reminder, especially in these homebound times, that it’s out there as an educational/informational resource.

Erling said 233 interviews have been conducted for Voices of Oklahoma, but not all are posted because it takes longer to produce them than record them. Thirty were posted last year and the plan is to post 30 more this year.

Here are a few of the many subjects you can hear the “superpicker” discuss on the site:

“He came to a show in Baltimore, Maryland, at The Hippodrome Theatre, which was one of those beautiful, old ornate theaters with velvet ropes. It would take your breath away to see the beauty of these old theaters. This was back when they used to do a live show in the theater and then also show movies. They showed movies about three times a day, and then in between movies they did a live stage show. Hank Williams was the star of the stage show. We opened the show with a square dance. Then I would go sit in one of those beautiful boxes in the theater and I would watch every show. ...

“I was just in awe of Hank Williams. He was amazing. Elvis Presley had the same thing — it goes beyond talent. It’s something that comes from inside. That’s always amazed me when I think about Hank Williams. All he did was stand there and sing, but what came from within was evident in every show.”

“I thought I was a pitcher one time, but they proved that I wasn’t a very good one, so they moved me to the outfield. A baseball scout had come to watch a pitcher named Boots Panella and saw me play just by chance.

“I had a very good day that day. I had a couple of home runs. He wrote down his name on a piece of paper and how to get in touch with him. He said that if I could go down to Florida they would give me a look. If I made it, they would pick up the expenses of my trip — if I didn’t make it, I was on my own. I couldn’t take the chance, so I never went down to Florida and I never pursued it. But because of money I just got aced out.”

Erling asked Clark if he ever wondered about the decision.

“Yes, I’ve wondered about that many times and still do to a degree. I’m one of those people that’s so consumed with baseball that if I see a bunch of young kids playing sandlot ball ... I will pull off the side of the road and sit and watch them play. That’s how much it means to me. But I outgrew it. There was no place for me to play.”

Subbing for Johnny Carson on ‘The Tonight Show’

“They asked me to be a guest host. I realized for the first time just how hot that seat is hosting ‘The Tonight Show.’ My first guest was Bob Hope. What am I going to ask Bob Hope? ‘How long have you been in the business, Mr. Hope?’ He evidently saw that and really helped save me. He started taking the answer and stretching it out a little bit for me, just so I could sort of get my feet wet.”

Erling suggested to Clark that Carson did not have the kind of personality to bring everyone “into the fold.” Only a few people were accepted as friends. But Clark and Carson bonded?

“I always felt like no one talked to Johnny before the show. A lot of times, you could feel it when Mr. Carson was approaching his makeup room. He would just come in and go over and sit down in the chair. He would look over and see me. He would say, ‘Hey Roy, how are you doing?’ I would say, ‘I’m doing great.’

“Then he would start talking to the makeup guy. We didn’t sit and have any really long conversations, but again, they would say things to me like, ‘He must like you because he doesn’t speak to guests before the show.’ I think one reason he did that is that he didn’t want to spoil anything that may be used on the show. He wanted you to talk about where you had been on the actual show.”

“I was a guest on ‘The Jonathan Winters Show.’ The producers of that show were two gentlemen from Canada, John Aylesworth and Frank Peppiatt. They had an idea for a show that was like ‘Laugh In.’ They said it would be slapstick comedy, but then also some good country music.

“They had talked to Buck Owens about doing it. The idea was to have two hosts on the show, and they asked me if I was interested in doing it. In this business, you say ‘yes’ to everything. I said, ‘Of course!’

“(That) was about September 1968. In January 1969, Jim Halsey, my manager, called me and said, ‘They are getting ready to do that show.’ I said, ‘They are getting ready to do what show?’ He said, ‘Well, they are calling it Hee Haw.’ I said, ‘They are calling what Hee Haw?’ He said, ‘It’s obvious they will come up with a better title in time to do the show.’ Thinking back on it, what better title could you come up with than ‘Hee Haw’? So the show went on the air in June 1969, and the rest is history.”

Among new inductees is Scott Joss, who was taught by Oklahoman Jana Jae and now is in Kristofferson's band.

The Red Dirt Relief Fund will stream a free encore of its Skinnerfest 2020 virtual music festival Dec. 1, as a way of thanking fans and donors for their support in this especially difficult year.

Natalia Lafourcade competed against the men and won. Here's a look at all of Thursday night's winners and photos from the event.

Jana Jae and Roy Clark are among people with Oklahoma ties who shared their life stories during Voices of Oklahoma interviews with John Erling. Tulsa World file

Roy Clar, who threw out the ceremonial first pitch before a 2012 Tulsa Drillers opening day game, is a lover of baseball. MIKE SIMONS/Tulsa World

You can still experience what it’s like to chat with country music legend Roy Clark by accessing an audio version of his Voices of Oklahoma interview. Tulsa World file

In this March 27, 2013, photo, Roy Clark smiles during an interview at his Tulsa office. The “superpicker” died in 2018. John Clanton/Tulsa World