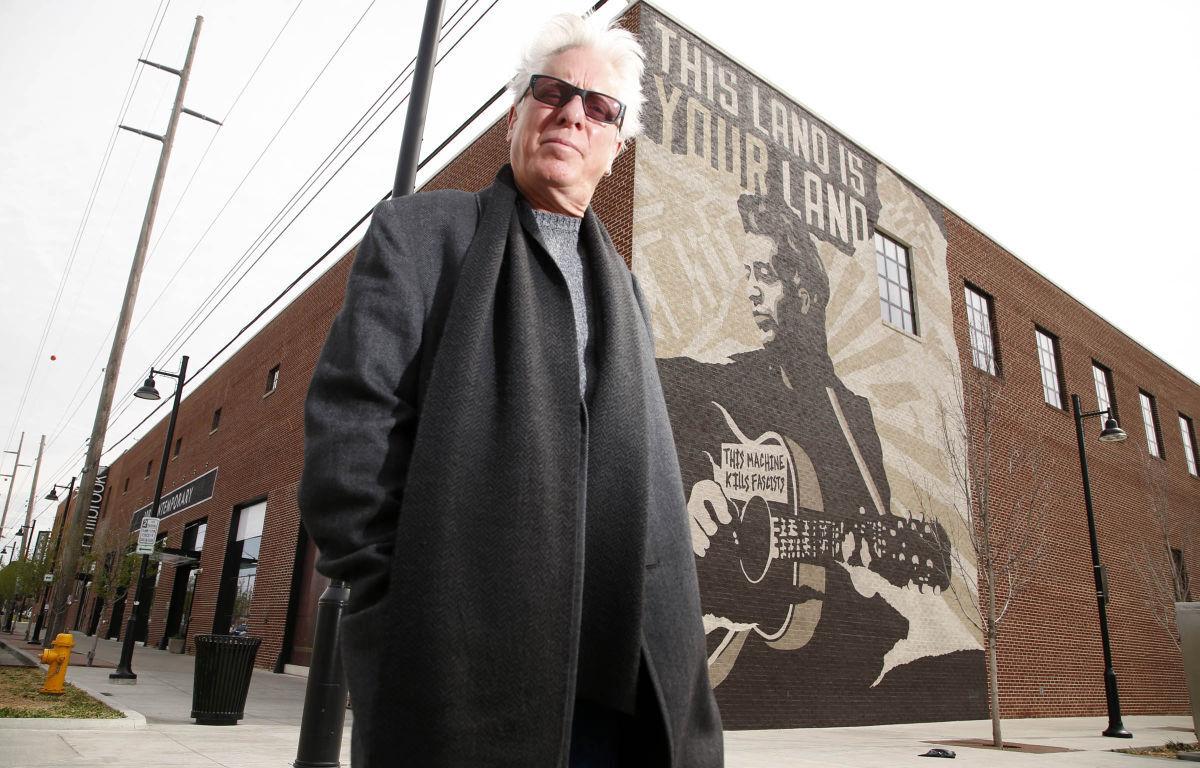 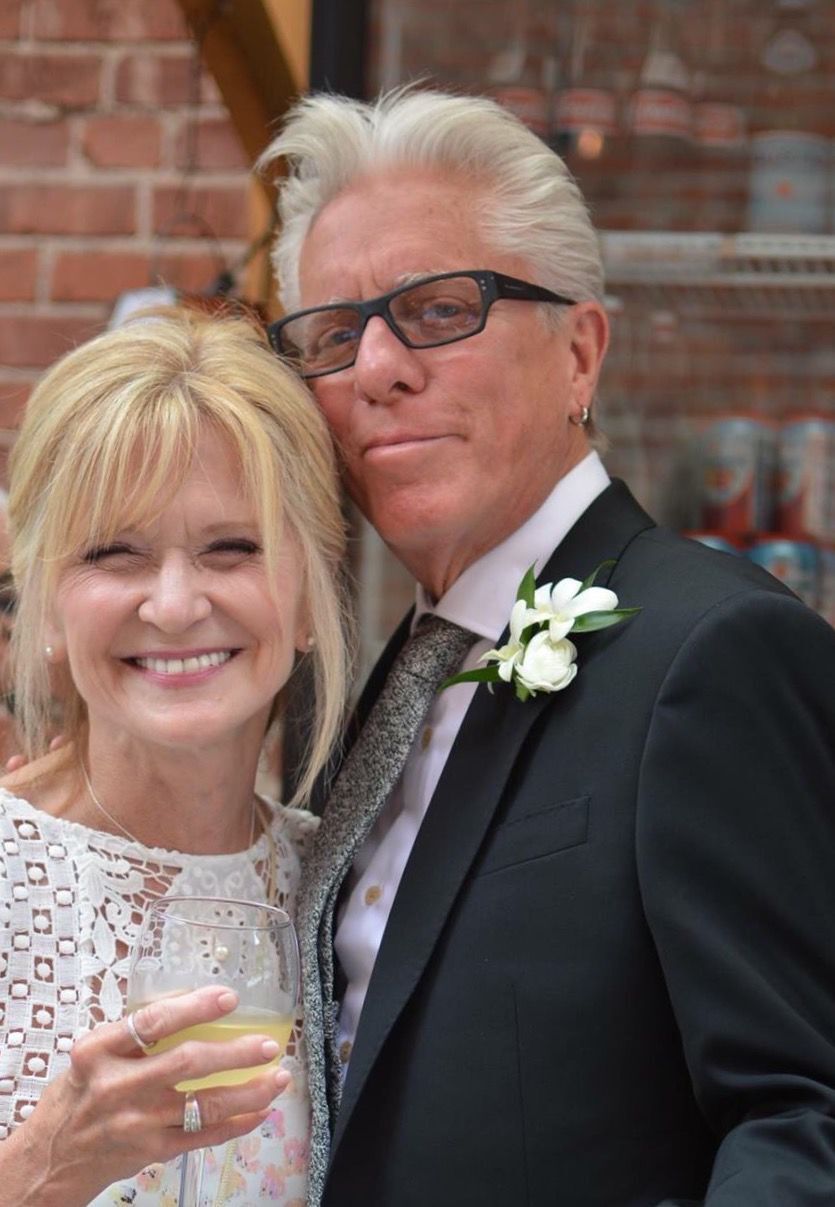 Mary and Jamie Oldaker were married in 2016, sparking the creation of Mojo Fest. Courtesy/Mary Oldaker 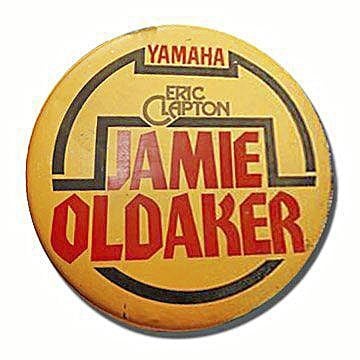 This drumhead from Jamie Oldaker (he was playing for Eric Clapton at the time he was using the drumhead) is among items bound for the Oklahoma Museum of Popular Culture. 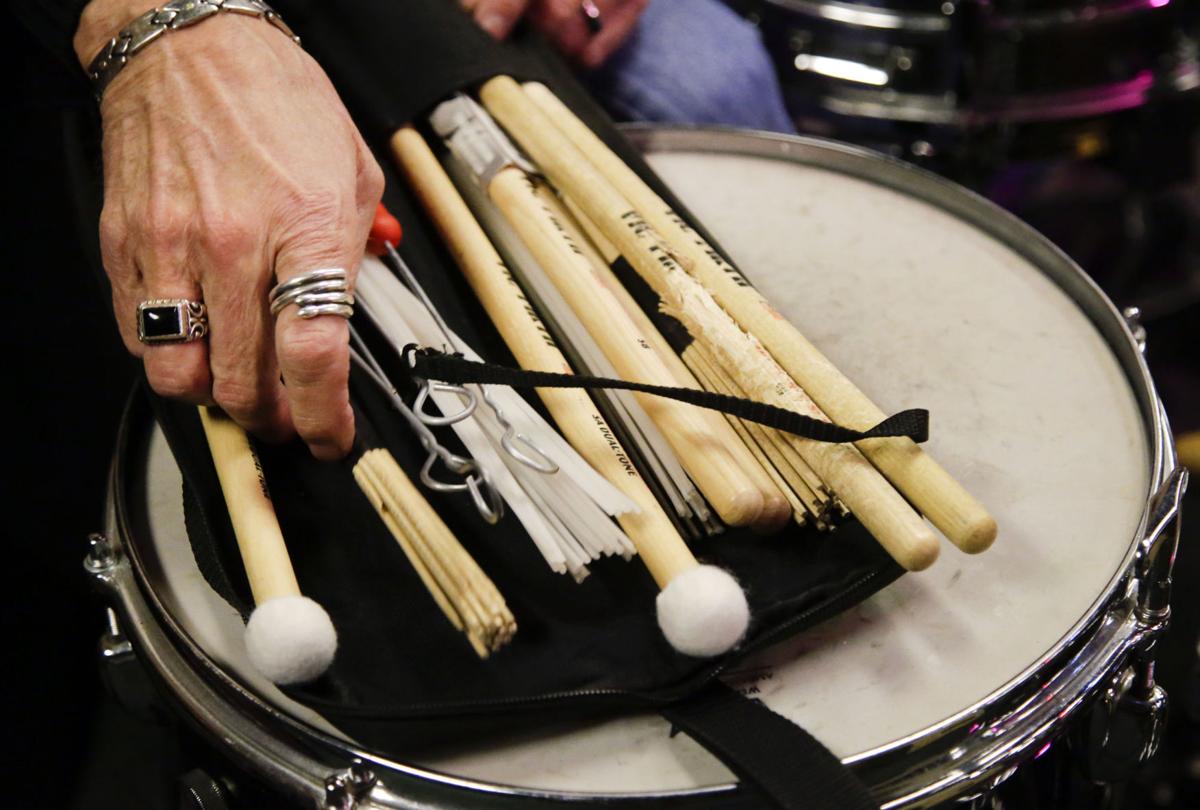 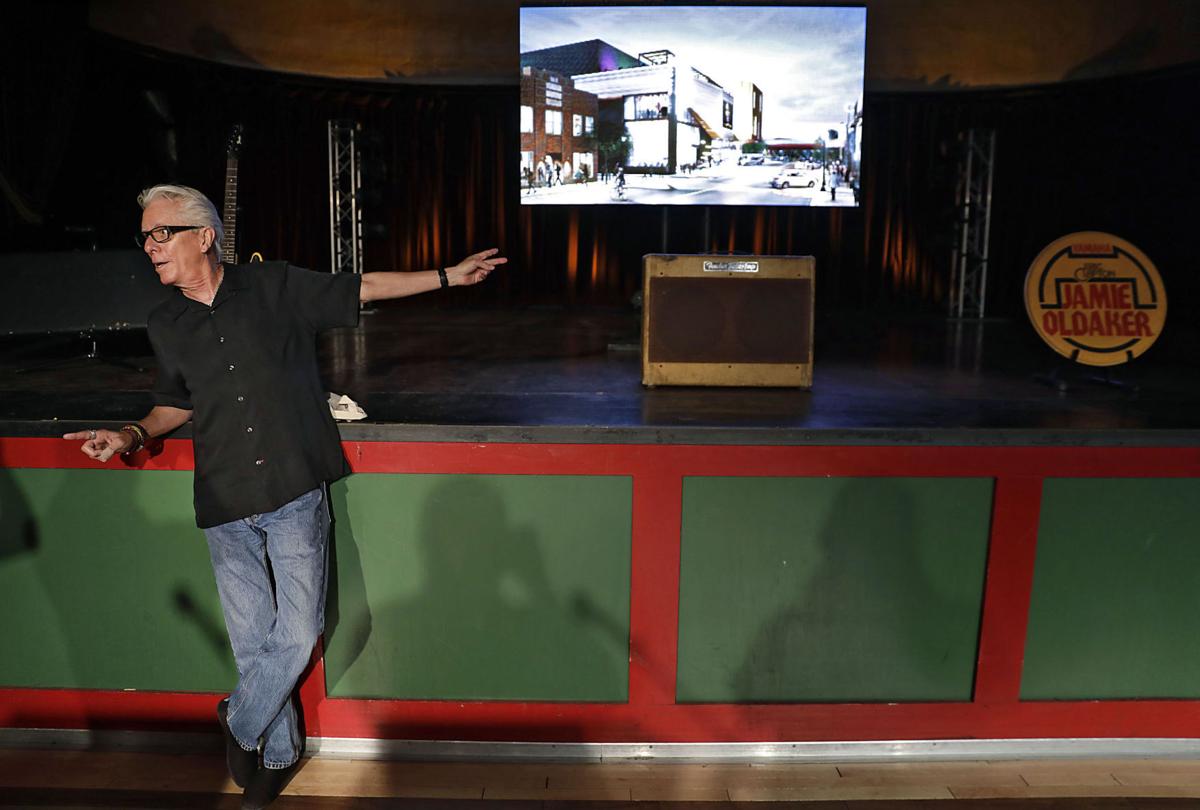 Drummer Jamie Oldaker, an ally of the Oklahoma Museum of Popular Culture, talked with attendees following an unveiling of museum plans in 2018. MIKE SIMONS/Tulsa World

Mary and Jamie Oldaker were married in 2016, sparking the creation of Mojo Fest. Courtesy/Mary Oldaker

This drumhead from Jamie Oldaker (he was playing for Eric Clapton at the time he was using the drumhead) is among items bound for the Oklahoma Museum of Popular Culture.

Drummer Jamie Oldaker, an ally of the Oklahoma Museum of Popular Culture, talked with attendees following an unveiling of museum plans in 2018. MIKE SIMONS/Tulsa World

If you want to know how talented Jamie Oldaker was as a drummer, lay eyes on the list of people who hired his sticks: Eric Clapton, Leon Russell, Peter Frampton, Ace Frehley, Bob Seger, Stephen Stills, the Bee Gees.

If you want to know about the human side of Oldaker, check out what bluegrass legend Peter Rowan said about him.

Oldaker, who was inducted into the Oklahoma Music Hall of Fame in 2010, died Thursday at his Tulsa home. Oldaker, who had battled cancer, was 68. Rowan was among music artists who provided recollections about the Tulsa Sound figure.

“Jamie Oldaker was one of the funniest people I’ve ever had the pleasure to work with,” Rowan said in a statement provided to the Tulsa World.

“From Texas to Telluride he kept us laughing at the foibles and fortunes of the touring musician’s life. Every truck stop and convenience store was another opportunity for a three-ring circus. Jamie brought out the Marx brothers in all of us.”

Rowan said Oldaker shared stories about growing up in Tulsa with Russell and JJ Cale and tales from his years as a member of Clapton’s band.

For instance: The first night Oldaker spent at Clapton’s house, the jet-lagged Tulsan was just dozing off when George Harrison climbed through the bedroom window playing a ukelele and singing, “I’m a jolly lumberjack, a jolly, jolly woodsman!” Welcome to England.

Rowan said Oldaker talked about how, during teen years, he and other young musicians would play local gigs then head to north Tulsa to listen to (and play with) blues and jazz performers late into the night. Rowan said Oldaker picked up on the groove in Black clubs and was made to feel at home.

Oldaker received this advice when sharing late-night barbecue with a performer at one of those clubs: “Son, you got to ease off on the potato salad and bear down on the meat!”

And that’s a segue back to music.

“Indeed, there was no fluff in Jamie’s musicianship, and, after years of searching, I found the drummer who understood the deep music roots to be able to play percussion in the heart of the integral ensemble of bluegrass music,” Rowan said. “He was loved by all. He was the groove. Bear down on the meat!”

Born Sept. 5, 1951, and raised in Tulsa, Oldaker was, like Cale and Russell, among Tulsans responsible for exporting the Tulsa Sound to ears all over the globe.

Oldaker reached about 4 billion ears in 1985, when he was among participants at the historic Live Aid benefit concert. In addition to live audiences at stadiums in London and Philadelphia, Live Aid was watched by nearly 2 billion people worldwide. Phil Collins performed in London, then hopped on a Concorde and arrived in Philadelphia in time to perform onstage with Oldaker. The connection? Collins produced Clapton’s “Behind the Sun” album that year. Oldaker played drums on 11 Clapton albums.

The Clapton-Oldaker collaborations were launched with a simple message from Tulsa bassist Carl Radle: “Eric wants to make a record. Bring Jamie and the other kids from Tulsa with you.”

Clapton and Radle had been bandmates in the short-lived group Derek and the Dominos. Clapton was going through a dark period in his life. Radle, trying to light a fire under him, sent Clapton live recordings of Oldaker and others. A year passed before Clapton summoned “Jamie and the other kids from Tulsa.” Oldaker was preparing to go on the road with Russell and the Gap Band before getting the call to record “461 Ocean Boulevard,” an album that spawned the single “I Shot the Sheriff.”

After Oldaker’s death, Clapton provided a statement for publication. Here’s an excerpt:

“My life had been in serious decline when I was introduced to Jamie. The hard drug (heroin) had taken its toll, and I had lost interest in pretty much everything.

“Carl Radle, the wonderful man who played with me in the Dominos and knew about my predicament, sent me a message along with a cassette, saying ‘you have to hear these kids.’ I listened and something woke up in me. I wanted to play again.

“ ‘The kids’ of course were Jamie Oldaker and Dickie Sims, who, along with Carl, were in Tulsa making incredible, sophisticated music. It had everything.

“I jumped at the proposition, and we began our momentous journey. We went as far as we could go (with me as the annoying burden most of the time), but on the way we made incredible music — sometimes cool, sometimes crazy, but always with a supreme pocket thanks to those guys. All I had to do was float along on top and sometimes just try to stay conscious.

“Then (there was) another crisis, which separated us all for a while, and I was finding it hard to get back in the saddle. I called Jamie, and, for the second time, he saved my bacon.”

Oldaker became a drummer because his father had been a drummer. His parents were supportive and tolerant of the never-ending line of musicians jamming in the family’s household.

In 1964, Oldaker was watching television when the Beatles performed on “The Ed Sullivan Show.” He turned to his parents and said, “I want to do that. I want to be on that show.” Seven years later, Oldaker performed on the show with Phil Driscoll.

Oldaker’s early local bands included the Rogues Five and Tulsa County. Rogues Five once opened for the Doors. He was backstage at the Assembly Center when someone tapped on his cymbals. Oldaker’s immediate thought was, “Don’t touch my stuff!” Jim Morrison said, “Nice cymbals, man,” and walked away.

Oldaker used to drive by the Church Studio during the Shelter Records era and ache to get inside. He gained entrance because he was hired by Russell as a session musician. He recalled details during a 2016 interview to discuss Tulsa’s credentials as a music town. A proponent of Oklahoma music, he was a proud ally of the Oklahoma Museum of Popular Culture. He launched a Tulsa music festival, Mojo Fest, in conjunction with his 2016 marriage to the former Mary Billings. The festival raised funds for the Tulsa Day Center for the Homeless.

During the 2016 interview, Oldaker talked about his early-in-life goals. He said he wanted to travel and stay in nice hotels and play in front of millions of people. Mission accomplished. In addition to being in bands with all the performers listed above, he was a founding member of the Tractors.

“The only thing I did not put into my equation when I was a kid was I didn’t ever say I want to make a lot of money,” he said. “I didn’t think that was part of the thing. That wasn’t a goal. My art was the goal.”

Frampton and Clapton called Oldaker to chat and pay respects when he was in the twilight of his life. Frampton said something that made Oldaker smile. They said they loved each other.

Clapton didn’t “just” talk. For his longtime friend, he sang the second verse of the song “Always,” written by Irving Berlin nearly 100 years ago:

Days may not be fair, always

That’s when I’ll be there, always

Not for just a year, but always.

The Oklahoma Museum of Popular Culture released this statement:

We are heartbroken by the passing of legendary Tulsa drummer Jamie Oldaker.

He has been with us from the very beginning in our work to build OKPOP.

He felt that it was incredibly important for the state of Oklahoma to collect, preserve and share the stories and accomplishments of Oklahoma's creatives! He advocated for OKPOP to government leaders, his peers in the music industry and everyone he met.

We are challenged by his energy, passion for life and drive to be the best. We will be working with his family to tell his story to future generations of young people who strive to create something special with their lives. We love you and will miss you Jamie!