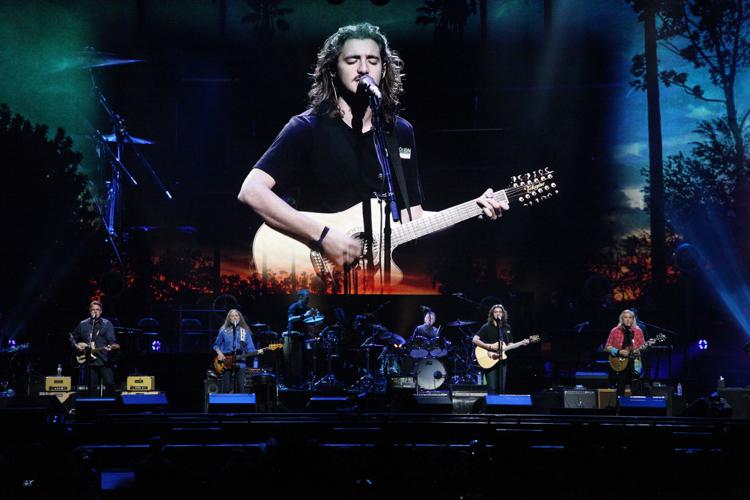 Deacon Frey, son of the late Glenn Frey, is displayed on a projection screen behind the stage during an Eagles' concert Sunday night at Tulsa's BOK Center. JOEY JOHNSON/for the Tulsa World 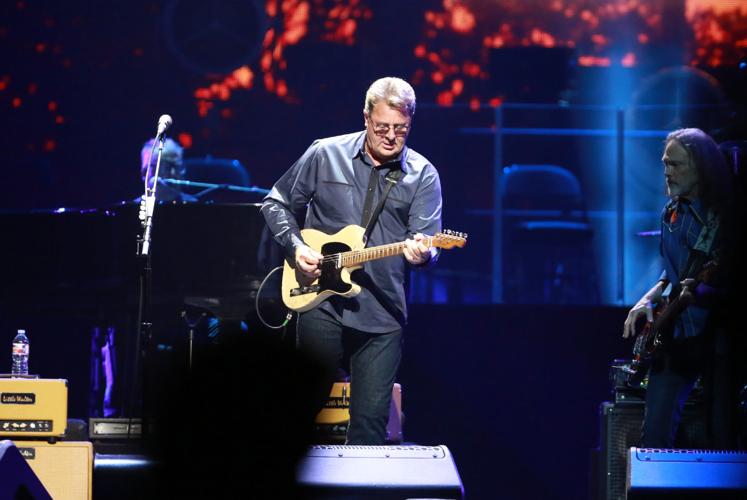 Vince Gill, who is touring with the Eagles, performed Sunday night at Tulsa's BOK Center. JOEY JOHNSON/for the Tulsa World

Arms raised high, Deacon Frey and Vince Gill shared a hand slap after the Eagles took final bows at Tulsa’s BOK Center. Their body language — and their words — suggested Sunday night meant something to them.

For one, it was a homecoming.

For the other, it was a chance to pay tribute to a dad on Father’s Day.

Glenn Frey, a founding member of the Eagles, died in 2016.

Instead of calling it a career, the Eagles forged ahead with new additions. Deacon Frey (Glenn Frey’s son) and Gill, a country music star, were added to the roster for a tour that brought the band to Tulsa as part of a “10 for 10” concert series celebrating the BOK Center’s 10th anniversary.

The date of the show coincided with Father’s Day. Don Henley wished a happy Father’s Day to all the dads in the packed house and said, “We are delighted to have Glenn’s son, Deacon, up here with us.”

People in the crowd rose to their feet for a heartwarming ovation that lasted more than 30 seconds.

“Thank you for that,” Henley said. “He’s doing his dad proud.”

Frey, who addressed the audience later, said, “This is so much fun for me. I’m having the time of my life. I wouldn’t want to remember my dad any other way than by playing his songs.”

The words were met with applause and Frey said, “I’m going to sing one more that he used to sing, if that’s OK.”

Frey ventured smoothly into “Peaceful Easy Feeling” and, at the end of the song, a photo of his late father appeared on a video screen behind the stage.

After complimenting Deacon Frey, Henley said the Eagles also were delighted to have Vince Gill aboard.

Again, the crowd responded with an ovation.

Gill was granted a heavy workload from a vocals standpoint and responded like a champ.

“He knows how to sing,” Timothy B. Schmit said. “We are glad to have him.”

It was not without irony that one of the songs Gill tackled was “New Kid in Town.” It was a spot-on version and it made you wonder if there’s a parallel universe out there where Gill was always an Eagle.

“Hello, you Okies,” Gill said midway through the show. “I’m the new guy in the band and I’m an Okie. It sure feels good to be back on this red dirt.”

Gill, who is from Oklahoma City, suggested he was allowed to bring one “country hillbilly song” to the table and the choice was “Don’t Let Our Love Start Slippin’ Away,” a No. 1 country hit from 1992, when the Eagles were near the end of a 14-year break-up.

At that time, fans had every reason to believe they would never see the Eagles on a stage together again. But hell froze over and the Eagles have been to Tulsa four times in the BOK Center’s 10-year history, including the first concert staged at the new venue in 2008.

The most recent visit?

“We’re going to play about two-and-a-half hours worth of music for you this evening — because we can,” Henley said.

From the opening notes of “Seven Bridges Road” to the show-closing “Desperado,” the Eagles stood and delivered the songs that made them one of the biggest acts in the world.

Have you heard the Eagles’ hits a jillion times before on the radio? Sure. But it’s still magic to see and hear those songs be recreated live. The set list included a surprise.

“This is something we threw together this afternoon — a little tribute to J.J. Cale,” Henley said before the Eagles performed “Tulsa Time.” Cale, an influential singer and songwriter from Tulsa, died in 2013. As “Tulsa Time” was being sung by Gill, an image of a map of Oklahoma appeared on the screen behind the stage.

“Tulsa Time” was not on Eagles’ set lists prior to the Tulsa tour stop. The song took the place of “Victim of Love,” which appeared on set lists of recent tour stops.

Fans got plenty of other Eagles’ standards, including “Take It Easy,” “One of These Nights,” “Take It to The Limit,” “Tequila Sunrise,” “Witchy Woman,” “I Can’t Tell You Why,” “How Long” (from the band’s most recent album), “Lyin’ Eyes,” “Those Shoes,” “Already Gone,” “Heartache Tonight,” “Life in the Fast Lane” and, of course, “Hotel California.”

If fans left the arena thinking they saw the greatest rock band ever born in the U.S., it’s probably because they did, new faces and all.

Deacon Frey, son of the late Glenn Frey, is displayed on a projection screen behind the stage during an Eagles' concert Sunday night at Tulsa's BOK Center. JOEY JOHNSON/for the Tulsa World

Vince Gill, who is touring with the Eagles, performed Sunday night at Tulsa's BOK Center. JOEY JOHNSON/for the Tulsa World