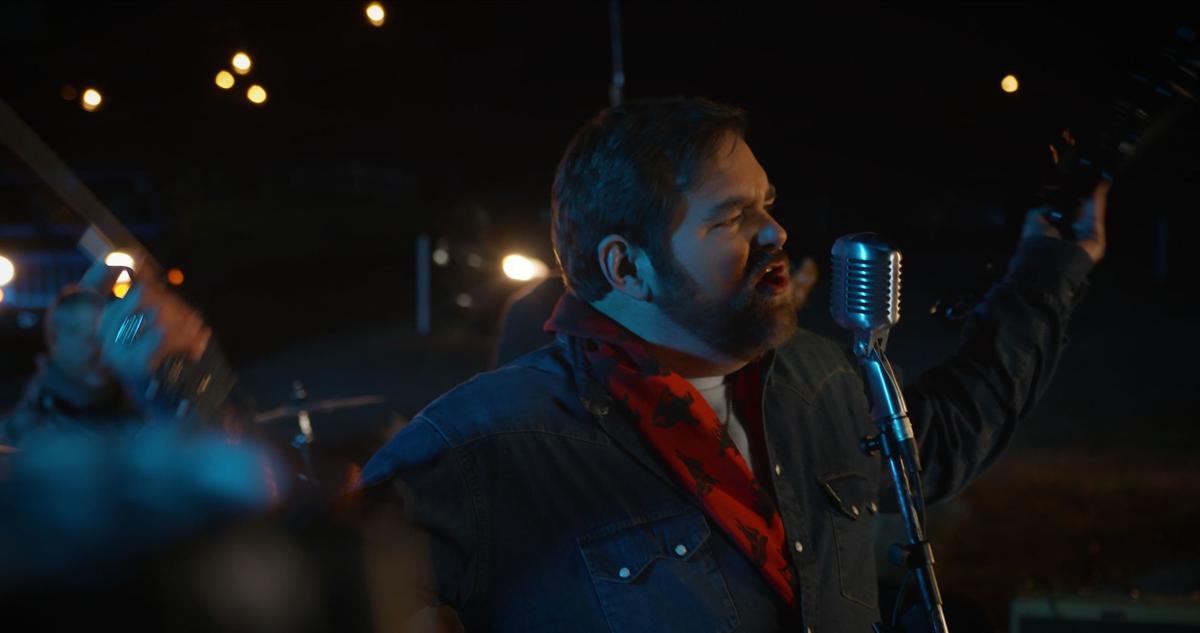 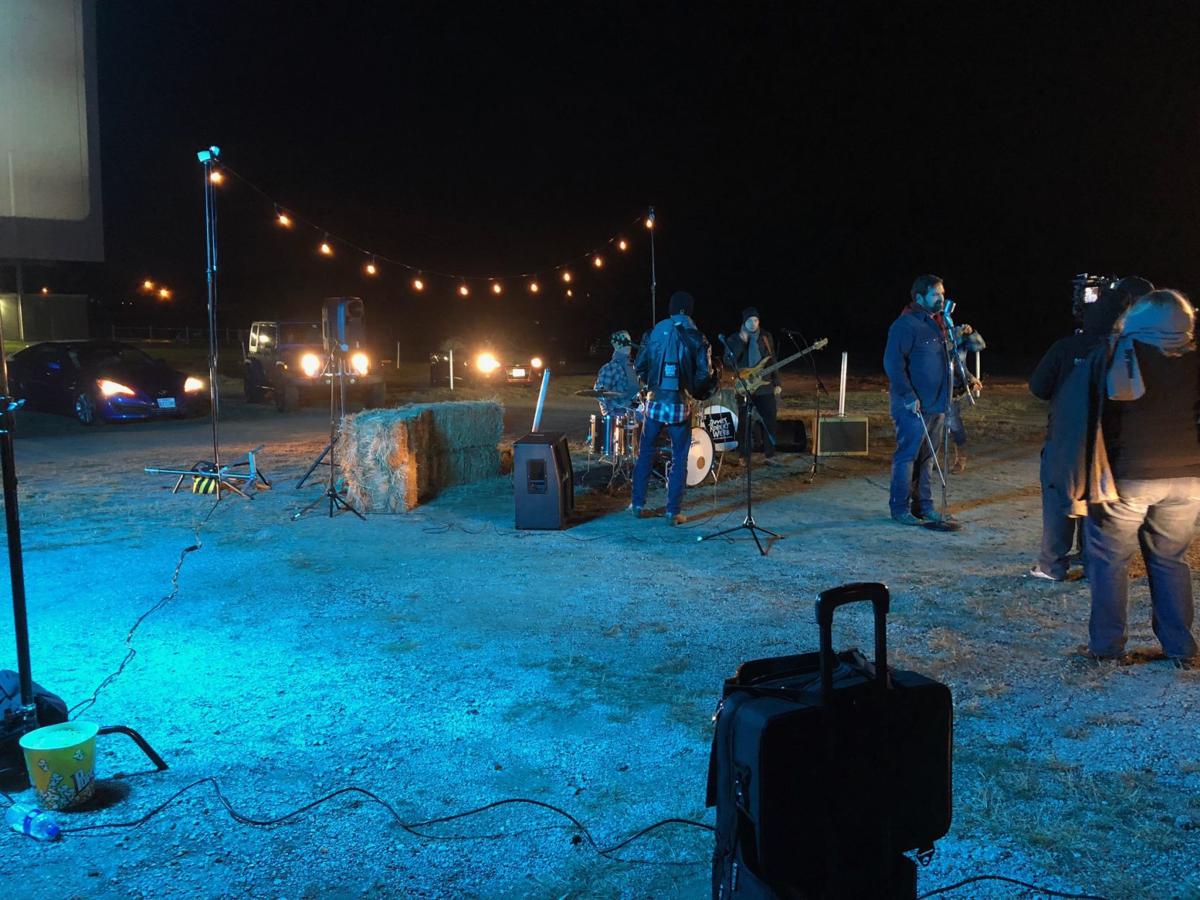 The Admiral Twin was the staging ground for a James Robert Webb music video. 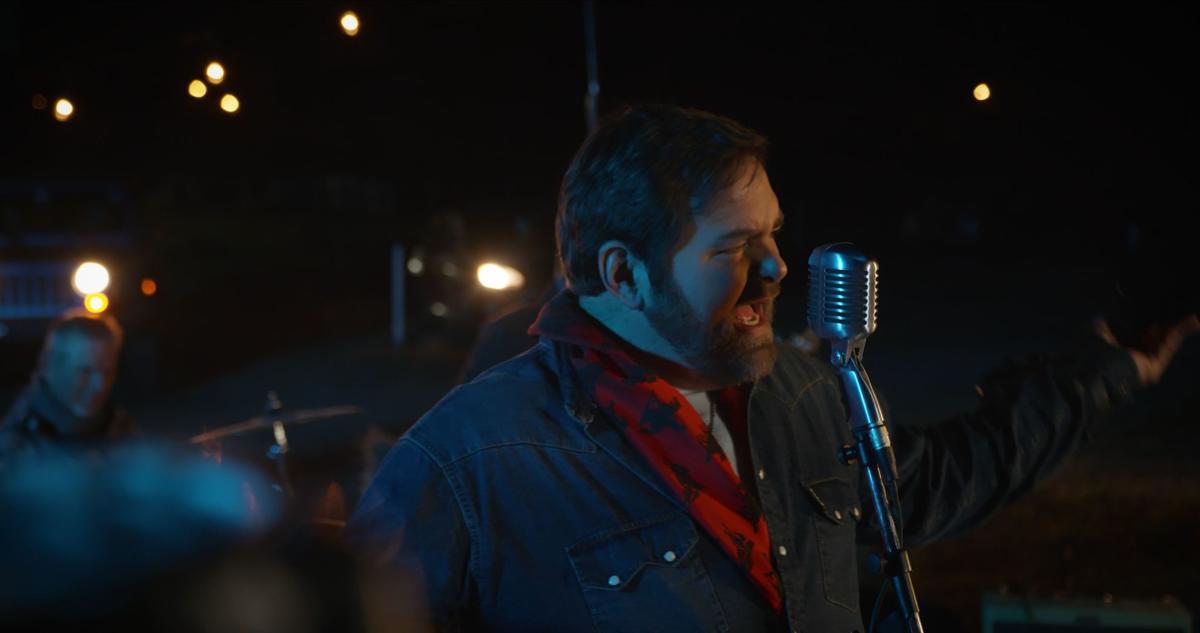 “Moviegoers” sat in their cars and listened to James Robert Webb during the making of a music video at the Admiral Twin Drive-In. Some of them were motivated to leave their cars and dance. 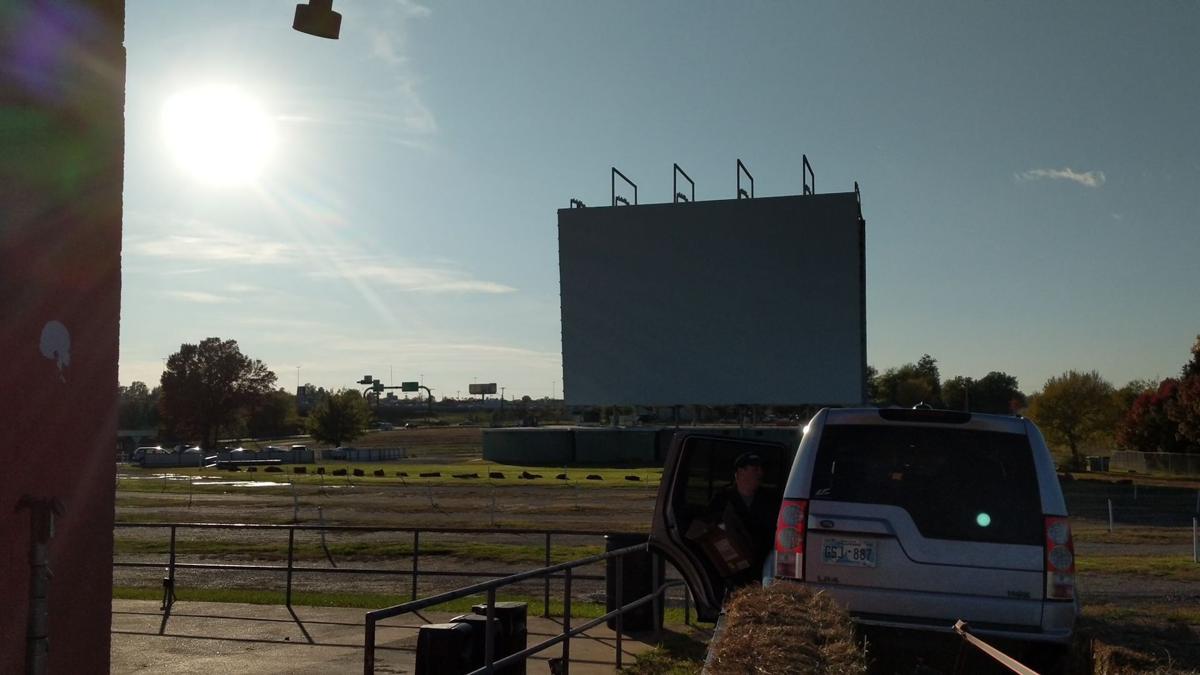 An iconic Tulsa location, the Admiral Twin Drive-In was used for the making of a James Robert Webb music video. Courtesy/Jordan Price of Media Works 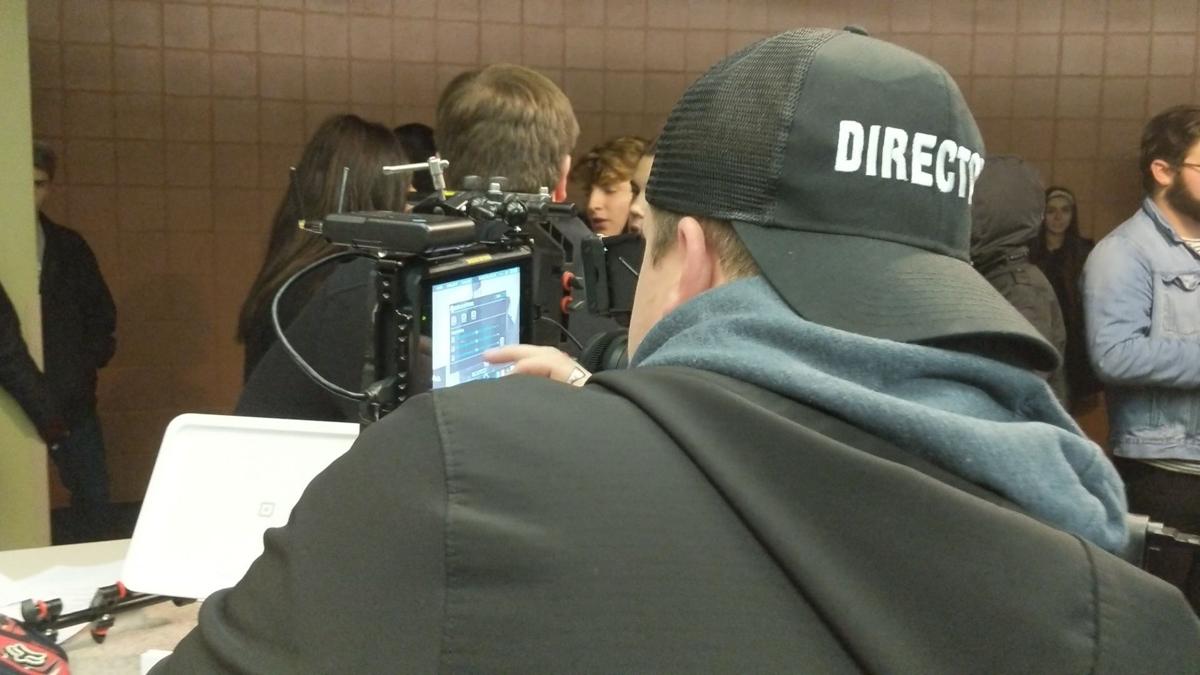 A James Robert Webb music video was made at the Admiral Twin Drive-In. Courtesy Jordan Price of Media Works 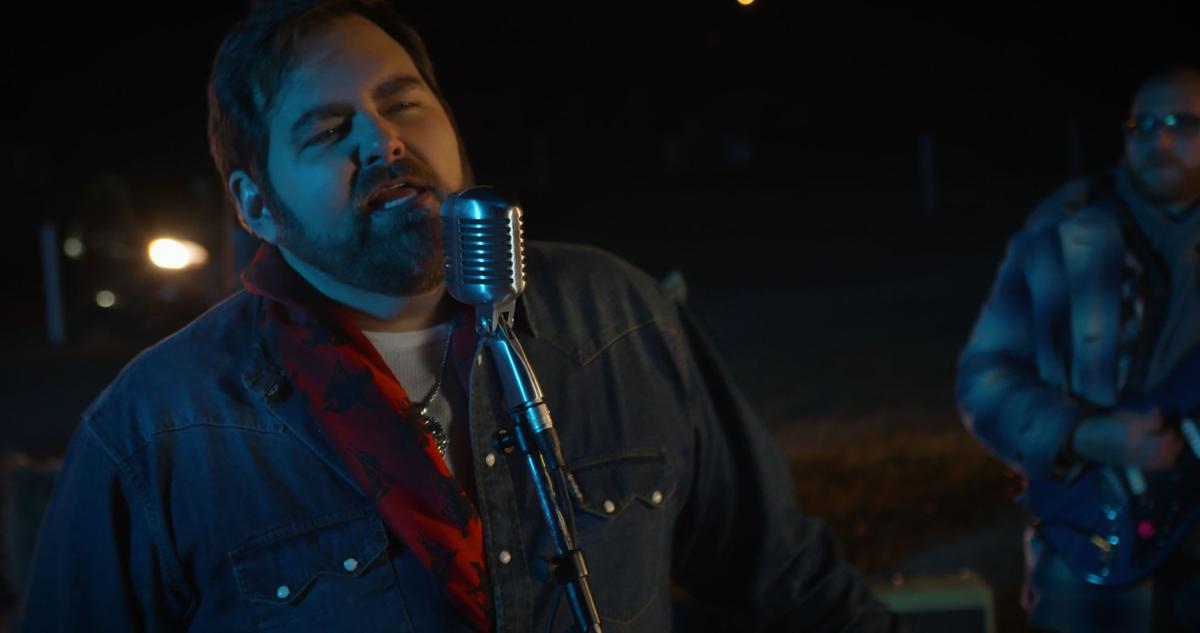 Dr. James Robert Webb of Tulsa doubles as a country music artist. A video for one of his singles was shot at Admiral Twin Drive-In. 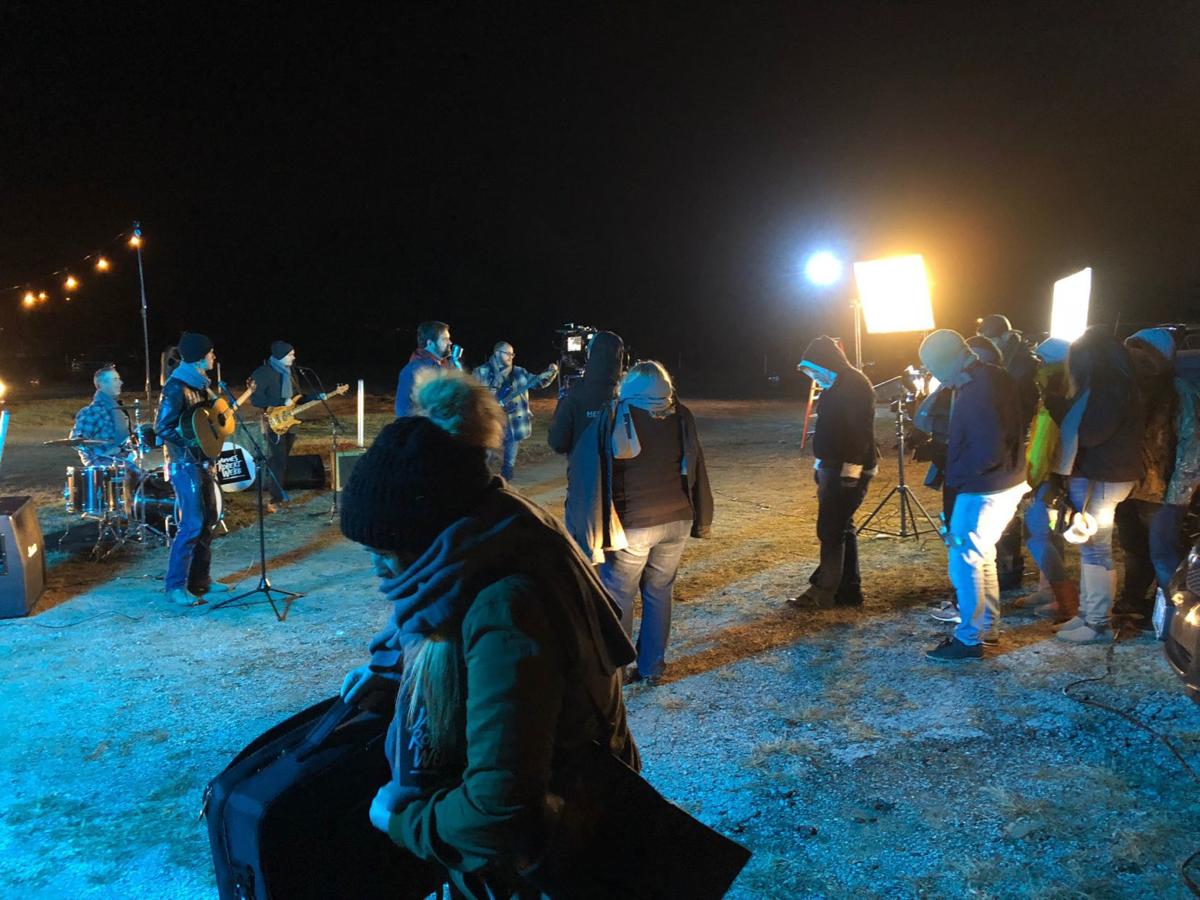 James Robert Webb and others involved in creating a music video braved a cold night at the Admiral Twin Drive-In. Courtesy Jordan Price of Media Works

Dr. Webb and Mr. Country Artist sounds like a lot more fun, especially if you’ve listened to his new single.

A doctor by day and singer by sundown, Dr. James Robert Webb maintains a medical practice near 71st Street and Sheridan Road.

He splits time between Tulsa and Nashville because he listened to his creative side and is trying to make a mark in the music business.

“It might be kind of an interesting reality show, although I don’t see myself as that interesting,” Webb said.

Interesting? If you’re from the 918, this should ratchet up your interest level in checking out Webb’s music: The video for his new single — “Now We’re Gettin’ Somewhere” — was shot at a Tulsa landmark, the Admiral Twin Drive-In.

The video can be viewed on Webb’s music site (jamesrobertwebb.com) and on YouTube. The video shows people parked at the iconic drive-in theater waiting for a movie to start. The projector isn’t quite warmed up yet, so Webb pops out of one of the parked vehicles and offers to perform with his band. The song helps moviegoers warm up to each other and it plays a matchmaking role in inspiring two strangers to dance.

Webb said the song is about first-date jitters. He recalled the scenario of asking a girl out and you pick her up and both are nervous, but you don’t realize how nervous she is because you’re too busy dwelling on your own jitters.

But, ideally, a connection occurs at some point and you cross the line of “now we’re getting somewhere,” which is the title of the song.

“I love the way the video turned out because this does kind of evoke memories of our childhood or our teen years growing up here,” Webb said. “Maybe some of us had that first date out at the Admiral Twin.”

Media Works in Broken Arrow collaborated with Webb to create the video. Webb said a couple of ideas were talked about, but he said everybody who grew up around Tulsa has either heard of the Admiral Twin or been there multiple times, so it seemed like a perfect spot to shoot the video. Webb grew up in Kellyville, so the majority of his outdoor movie experiences came at a now-closed drive-in theater near Sapulpa.

“Now We’re Gettin’ Somewhere” was written in the 1990s by three songwriters who have hits on their resume — Shawn Camp (“Two Pina Coladas”), Taylor Dunn (“Seein’ My Father In Me”) and Wynn Varble (“Have You Forgotten?”, “I’m A Little More Country Than That”).

Webb said it’s kind of amazing that the song has never been cut until now. The song was brought to Webb’s attention by Buddy Cannon, who has produced material for Kenny Chesney, Willie Nelson and Reba McEntire. Cannon is working with Webb on an album and “Now We’re Gettin’ Somewhere” is the lead single.

Webb said Cannon told him he has played the song for everybody he has worked with and it wasn’t quite right for them.

“I’m thankful that it wasn’t right for them because it feels like the perfect James Robert Webb song,” he said on his online site. “I immediately fell in love with this song the first time I heard it. It grabbed me because it sounded like a classic early George Jones song.”

Webb said it’s incredible that he gets to work with Cannon because, as someone pursuing a music career, you have crazy dreams that some day you’ll be earning Grammys and working with top-tier producers. Cannon is a former Academy of Country Music producer of the year.

“To see that I am actually working with Buddy is a dream come true,” Webb said.

Maybe it’s a sign that Webb was right to scratch his creative itch.

“Music has always been a part of my life,” he said. “I used it more for therapy, probably. But I really got interested in songwriting and it went from that subconscious thing to thinking in my mind that what is about these songs that get stuck in your head and stand the test of time? What is it about these people that write them, especially songwriters that write more than one, people like Bob Dylan or Don Henley or Garth Brooks? The interest in songwriting, just like any other hobby, it kind of started out as a hobby, and then I found I had a knack for that part, too.”

When did Webb take the plunge? He’s 46 years old. He said his wife would say that he turned 40 and said something to the effect of “If somebody else can do it, why not me?”

Added Webb, “Having a successful medical practice, what else am I here to do? I just had that calling and I have chosen to follow it and it has worked out.”

Asked about the difficulty of having “dual citizenship” in Nashville and Tulsa, he said he’s lucky that his medical practice is structured in a way where he can do the doctor thing every day, but he doesn’t have to be in the office on a daily basis.

“As a radiologist, a lot of stuff I am doing can be done remotely,” he said. “Our focus, the practice, is helping people with bone health so I am really able to help people that some people may consider hopeless cases. They’ve been told there is nothing that can be done. So we just mostly focus on helping people with back pain avoid surgery and avoid narcotics...”

Webb said he usually performs procedures in Tulsa on Mondays and Tuesdays. One of the reasons Webb wanted to make a video in Tulsa is to tip his hat to a place that has “so much amazing stuff.” He said people may not appreciate all the interesting things here, especially for a city Tulsa’s size. He mentioned the Tulsa Sound figures, Leon Russell included, and the city’s Oil Capital of the World history and the Francis Ford Coppola movies filmed here.

“You’ve got people like Ryan Tedder from OneRepublic showing up here and Charlie Wilson,” he said. “I haven’t even started talking about the country people, the big superstars. ... There are a lot of things to draw on inspiration-wise from Tulsa.”

Staying warm was among priorities during the making of the video, directed by Jordan Price.

“Now We’re Gettin’ Somewhere” was unveiled in 2018, but the video wasn’t released until 2019. Webb said it was filmed on a very cold night after the Admiral Twin completed its 2018 season.

“It was in the 40s and the temperature kept dropping and I think by the time we wrapped the video it was about 32,” Webb said. “It was at or below freezing, plus the wind chill.”

Webb appreciates that everyone — the band, the extras — “hung in there” for the duration of the shoot.

“A lot of people were sitting in their cars trying to stay warm with scarves and everything and then jumped out for the scenes when they were ready to shoot,” he said. “It was a very challenging shoot. Jordan did great job.”

Webb said it just goes to show that the people of Tulsa are resourceful and will stick with it and they’re not afraid of a little cold if something needs to get done. In his case, it was a step forward. “Now We’re Gettin’ Somewhere” is his third song to reach the Music Row Country Breakout Chart.

Webb, considering his age and the late start in pursuing a music career, said he feels like a dark horse and an unlikely candidate to have a No. 1 hit or be a success in the industry. He’s still waiting for a major breakthrough. But he said age is relative and he’ll keep trying to do the best he can do. He’s not wired to “only” be creative. He’s got a competitive side, too. He said one of his favorite quotes is “the saddest thing about reaching your goals is you set them too low.”

“I’m somebody who likes to see how far I can go and how well I can do,” he said. “I don’t like to shoot for the middle, you know?”

The resume for the Country Music Hall of Fame group includes 43 No. 1 singles.

A news release said it will be Dylan's first broadcast concert performance in nearly 30 years.

Bob Wills transformed the historic venue into the Carnegie Hall of western swing.

Festivals coincide this weekend in Grove

Musical entertainment, food and boat races will be part of the American Heritage Music Festival, founded by Jana Jae, and the Toes in the Grand Summer Kickoff Festival at Grand Lake.

B.J. Thomas was born in Hugo and raised in Texas. He died last week at age 78.

Acoustic Freight Train Instrument Donation and the Tulsa Boys' Home are teaming up on the venture.

The Admiral Twin was the staging ground for a James Robert Webb music video.

“Moviegoers” sat in their cars and listened to James Robert Webb during the making of a music video at the Admiral Twin Drive-In. Some of them were motivated to leave their cars and dance.

An iconic Tulsa location, the Admiral Twin Drive-In was used for the making of a James Robert Webb music video. Courtesy/Jordan Price of Media Works

A James Robert Webb music video was made at the Admiral Twin Drive-In. Courtesy Jordan Price of Media Works

Dr. James Robert Webb of Tulsa doubles as a country music artist. A video for one of his singles was shot at Admiral Twin Drive-In.

James Robert Webb and others involved in creating a music video braved a cold night at the Admiral Twin Drive-In. Courtesy Jordan Price of Media Works