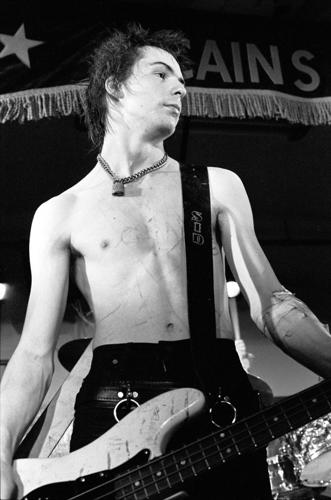 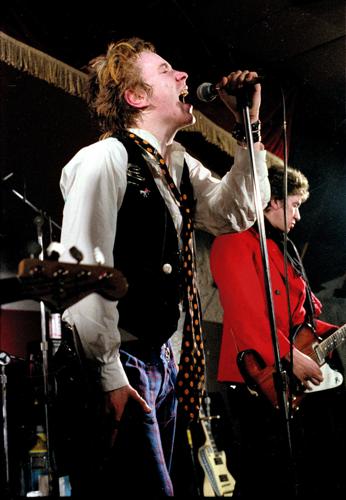 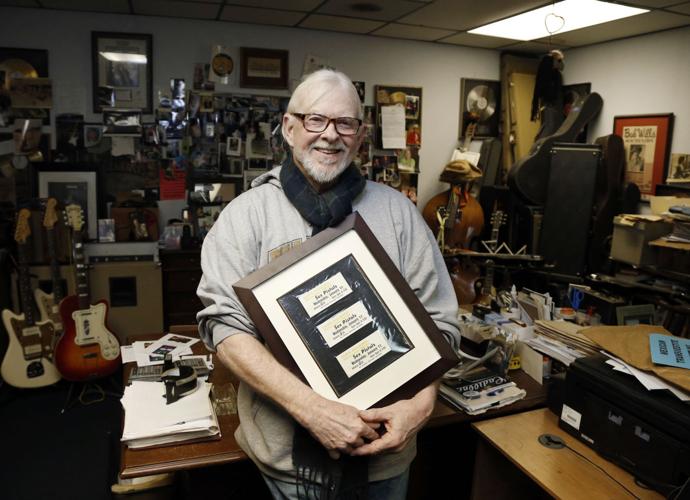 Larry Shaeffer talks about the time the Sex Pistols came to the Cain’s Ballroom in Tulsa. STEPHEN PINGRY/Tulsa World 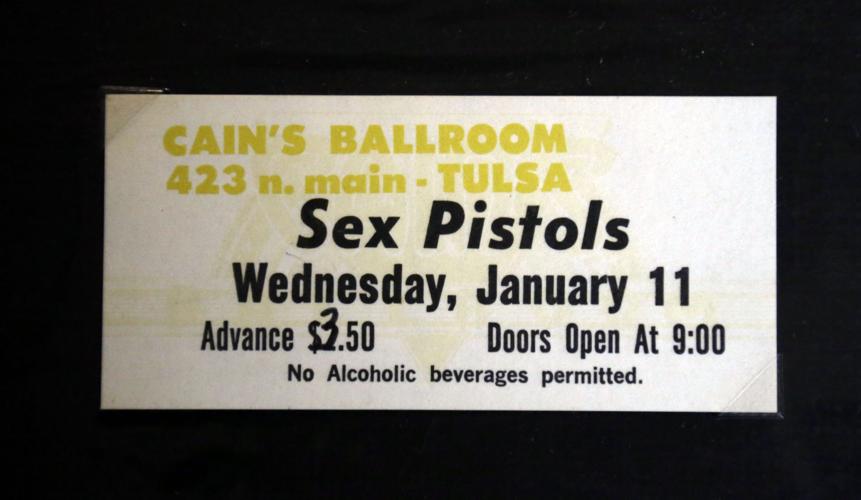 Tickets for the Sex Pistols concert at Cain’s Ballroom in 1978 were sold for $3.50. STEPHEN PINGRY/Tulsa World 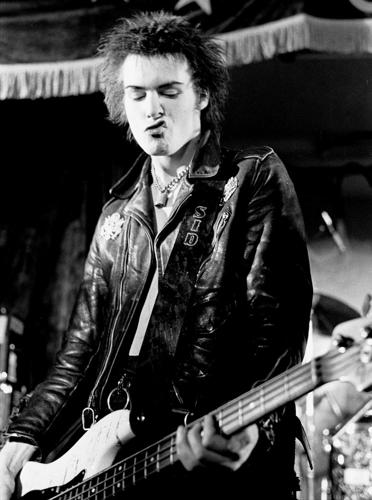 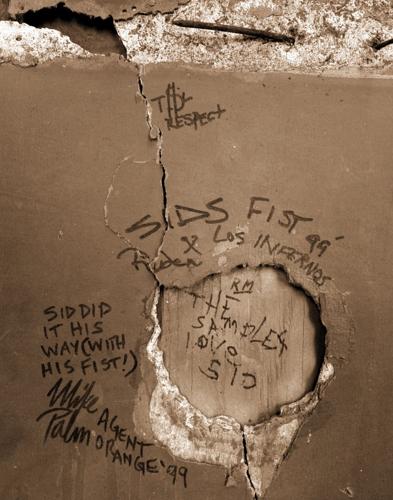 The Sex Pistols’ bass player, Sid Vicious, punched a hole in the dressing-room wall at Cain’s Ballroom when the band performed in 1978. Tulsa World file 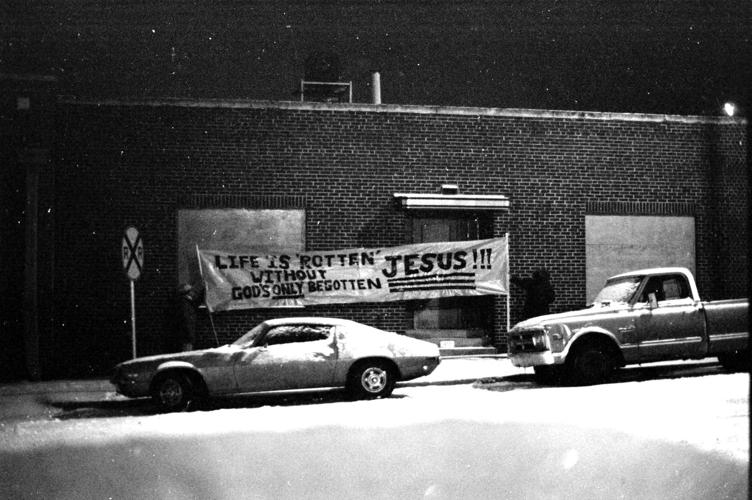 A protest sign across the street from Cain’s Ballroom as the Sex Pistols performed there in 1978. Photo by Richard Galbraith. 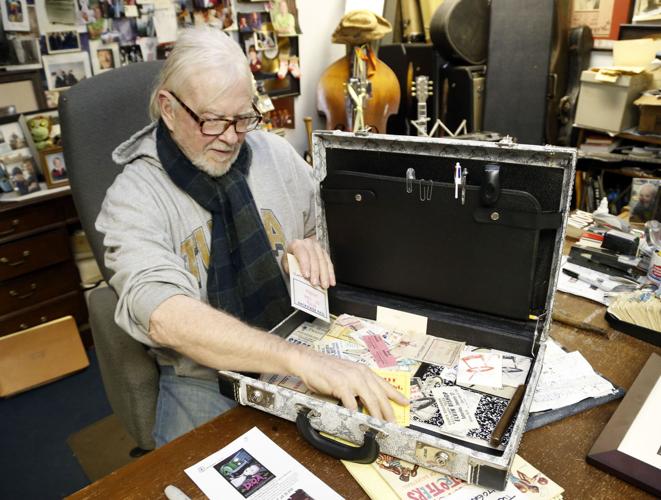 Larry Shaeffer looks through evidence of concerts past as he talks about the time the Sex Pistols came to the Cain’s Ballroom in 1978. STEPHEN PINGRY/Tulsa World

It was 40 years ago this week that the Sex Pistols took the stage at Cain’s Ballroom, the home of Bob Wills and Western-swing music, and turned Tulsa into a beacon for live music of all kinds.

Larry Shaeffer, the longtime local concert promoter who takes great pride in being “the only guy to book both Frank Sinatra and the Sex Pistols to play Tulsa,” said he remembers his interaction with the band like it was yesterday.

“I absolutely loved the guys. Their style was rude and in your face, and they were unapologetic about it,” Shaeffer said. “There wasn’t anything else out there quite like it, and I wanted to bring in new stuff.”

He’d begun operating Cain’s Ballroom in 1976 and was looking to diversify the product. He saw a swing from country music to the burgeoning punk-rock movement as a radical departure that was needed.

“I was making connections with agents who until then did not think of Tulsa as a stop for their bands touring in and out of Texas and other places,” said Shaeffer, who was the first to bring “new wave”-era legends, including the Police and the Pretenders, to town.

“This gave them a place for those acts, and word spread that something was happening in Tulsa, with Cain’s beginning to show acts you couldn’t see anywhere else.”

Seeing a performance by the Sex Pistols, which included such punk icons as vocalist Johnny Rotten and bassist Sid Vicious, wasn’t easy.

Tulsa would be one of only seven stops for the Sex Pistols’ U.S. tour, and Cain’s Ballroom is the only location still operating as a venue for live music.

The boys from England came to Tulsa six weeks after the release of their notorious album “Never Mind the Bollocks, Here’s the Sex Pistols,” with hot-button songs like “God Save the Queen” and “Anarchy in the U.K.”

The most controversial act to play Cain’s before the band’s arrival? “Maybe David Allan Coe,” Shaeffer said of the outlaw country singer with a chuckle.

While the incendiary Sex Pistols would disband just weeks after this Jan. 11, 1978, concert, and Vicious would be dead a year later, at age 21, of a heroin overdose, Cain’s Ballroom is still going strong.

And the fact that the Sex Pistols played there will always be part of its lore.

That’s why Tulsa’s historic Circle Cinema is showing a punk-rock documentary Friday, with Shaeffer on hand to talk about that night at Cain’s.

He’ll show off photos that Richard Galbraith took at the concert, and he’s also promoting a night of live Sex Pistols music at nearby Beehive Lounge when the movie’s over.

Shaeffer will no doubt tell the audience about warm beer, frigid weather, a protest, haggling over the band’s payment and a hole punched in a wall.

“I didn’t know much about them, but I was under the impression they would play New York and L.A. and that would be it,” Shaeffer said of the Sex Pistols, “but Malcolm McLaren (the band’s renowned manager) was bright” about their bad-boy reputation.

There was a reason the band was playing Atlanta, Memphis and Baton Rouge, along with Tulsa.

“(McLaren) wanted bad publicity for the band, so he put them touring through the ‘Bible Belt’ to stir up trouble. You know, the kinds of places where young Christians might protest — which is what happened here — and places full of rednecks.

“Here in Tulsa, they had no target audience. There was no punk scene here.”

But there would be. The genesis for Tulsa punk music of the late 1970s and the 1980s, several people have said, was this event.

The morning of the show

“I’ll never forget that day because I show up to Cain’s about 8:30 that morning, and guess whose bus is parked out front? It’s like maybe they left their show in Texas and came straight here,” Shaeffer said.

Maybe 15 people come rumbling off the bus and head inside Cain’s, creating a bit of a carnival atmosphere.

“But they were just young kids. It struck me that there was a bit of an innocence to them, really,” Shaeffer said.

John Lydon (Johnny Rotten) was the first one in the door, leading the group that noticed the promoter had some of their favorite beer on hand. It was for after the show, but there was no waiting.

“They wanted it then, so there they were drinking warm Heinekens, and things went pretty smooth after that. They drank them all and asked for more,” Shaeffer said.

Then their agent had a question to ask.

“He calls and says, look these guys don’t have any money, they can’t get around. I know you’re supposed to pay them $1,000, but is there any way that you can pay them $1,500 tonight?” Shaeffer recalled.

“I told him, you know this show is not going to sell out, and there’s snow here, but I can do it if you’ll let me raise the ticket price.”

Sitting in his Sand Springs office full of concert posters and guitars, the promoter shows off three framed tickets from that evening, and it’s obvious that the night’s $2.50 ticket price has been altered, with a pen, to read $3.50.

He said he could probably retire if he had more of the “deadwood” — the tickets printed for a show that are not sold, he explains. He would have printed up 1,270 for the show (the capacity for Cain’s at that time), and only about 800 were sold.

The night of the show

Police officers were present “like they thought there might be a live sex act or something,” Shaeffer said, and there was “what seemed like 50 professional photographers traveling with the group.”

The small protest outside was highlighted by young Christian fundamentalists holding a sign that read: “Life is ‘rotten’ without God’s only begotten/Jesus!!!”

The show went on without incident one night after Vicious — who punched a hole in a Cain’s wall, an item that has been saved for posterity and will be on display at the Circle Cinema event — had reportedly been head-butted by a woman at a Dallas show.

“No arrests, just the protest, and that was a sign and a few snowballs being thrown by kids more than anything. But the band seemed intrigued by them,” he said.

But the perception of Tulsa as a diverse “music town” was forever changed, even if it took Shaeffer some time to realize “how big a deal this was to people because this is what people wanted to talk to me about. That night.

“There were a lot better shows at Cain’s in those days,” he said, naming Muddy Waters, Ry Cooder and the Police, among others, “but this was obviously the most notorious show.”

What: A screening of the 1980 punk-rock documentary “D.O.A.” with a introduction by Larry Shaeffer, former Cain’s Ballroom owner who booked the Sex Pistols for 1978 concert there. He will also answer questions following the screening, and memorabilia will be on display including tickets to the Cain's concert, photographs from that show taken by Richard Galbraith, and a portion of the Cain's wall that Sid Vicious put his fist through.

Tickets: $9.50 available online at circlecinema.com or at the theater box-office; $13 for double-feature of "D.O.A." followed by "Sid and Nancy" biopic starring Gary Oldman as Sid Vicious.

Actor and wrestling legend John Cena broke the World Record for most wishes granted through the Make-A-Wish Foundation.

Her riveting performance as the cruel and calculating Nurse Ratched in "One Flew Over the Cuckoo's Nest" won her an Academy Award. She was 88.

James Earl Jones is hanging up his cape as Darth Vader

James Earl Jones will not record new lines for new "Star Wars" projects. But his voice will live on.

25 best movies about couples on the run

Criminal lovers going on the run have inspired movies since 1937. Here's a look at the top 25 films about these thrilling couples.

Gwyneth Paltrow had fears about being seen as an "evil stepmother"

Gwyneth Paltrow had fears about being seen as an "evil stepmother"

Larry Shaeffer talks about the time the Sex Pistols came to the Cain’s Ballroom in Tulsa. STEPHEN PINGRY/Tulsa World

Tickets for the Sex Pistols concert at Cain’s Ballroom in 1978 were sold for $3.50. STEPHEN PINGRY/Tulsa World

The Sex Pistols’ bass player, Sid Vicious, punched a hole in the dressing-room wall at Cain’s Ballroom when the band performed in 1978. Tulsa World file

A protest sign across the street from Cain’s Ballroom as the Sex Pistols performed there in 1978. Photo by Richard Galbraith.

Larry Shaeffer looks through evidence of concerts past as he talks about the time the Sex Pistols came to the Cain’s Ballroom in 1978. STEPHEN PINGRY/Tulsa World