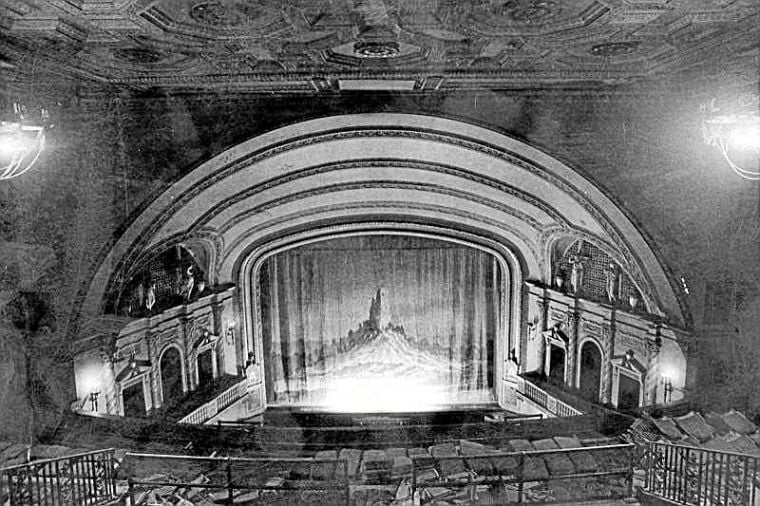 The Orpheum was one of the “Big Four” theaters in downtown Tulsa in the 1920s. Steve Clem and Maggie Brown pose with some of the many photographs used their new book about Tulsa's movie theaters. Behind them is an image of the interior of the Ritz Theater, which was demolished in 1973. The Will Rogers Theater on 11th Street was a streamline art deco-style movie theater that opened in 1942 and closed for good in 1977. It was demolished for a church parking lot in 1986. 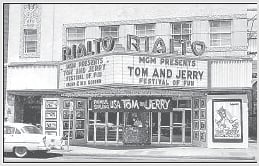 The Rialto in its heyday was originally one of Tulsa's "Big Four" theaters, along with the Orpheum, the Ritz and the Majestic. It had several locations before finally being torn down in the late 1970s. 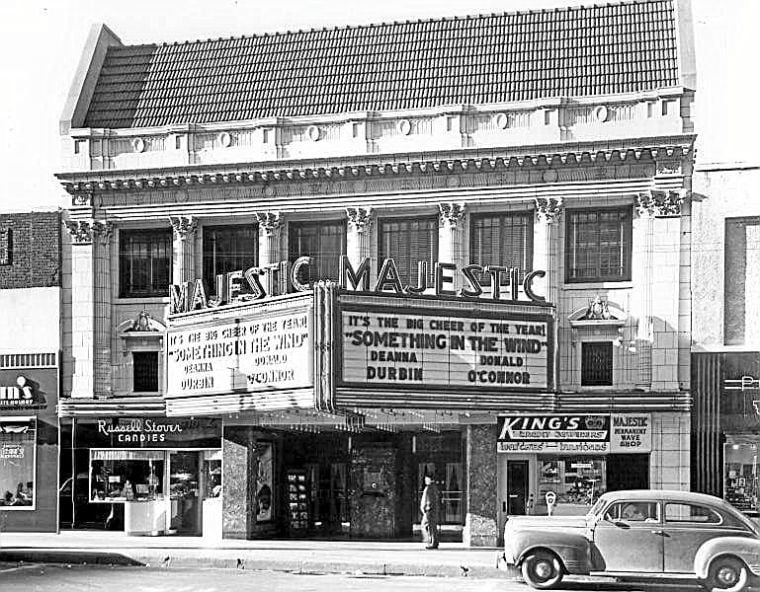 The Majestic was among the “Big Four” theaters in downtown Tulsa.

When Tulsans in the early 20th century headed downtown to take in one of those new-fangled “moving picture shows,” they were often treated to something more than flickering images on a big screen.

For example, at the Ritz Theater, which for many years stood at 18 W. Fourth St., the twinkling lights embedded in the ceiling were augmented by images of clouds projected above the audience by the theater’s Brenograph, creating the illusion that patrons were enjoying that evening’s entertainment under stars — even if they were attending a matinee.

Other theaters, such as the Orpheum, 14 E. Fourth St., contained a Wurlitzer pipe organ, whose lush sound matched the theater’s opulent surroundings and was a reminder of the times when the theater’s big draws were vaudeville acts rather than movies.

Going to the movies was a real experience — a quality that seemed to diminish as the multiplex theaters began to proliferate.

That is one of the many stories told in “Tulsa Movie Theaters,” a new book by Steve Clem, a long-time Tulsa broadcaster and author of the book “Tulsa’s KAKC Radio: The Big 97,” and Maggie Brown, director of exhibits at the Tulsa Historical Society & Museum.

The book chronicles the history of movie theaters in Tulsa, from the store-front theaters that began appearing in 1906 through the era of the grand movie palaces that were downtown destinations for decades to the rise of the suburban movie theaters and multiplexes, as once single-screen houses began to divide their spaces into smaller theaters, to today’s stadium-seat theaters that are just beginning to reopen their doors in the wake of the COVID-19 pandemic.

It also includes stories about such distinctive theaters as the Delman and the Will Rogers, with their art deco-inspired designs; the Boman Twin, which was the first multiscreen theater in the city; and the Continental, which was built in the 1960s with a goal of returning an atmosphere of glamour to the movie-going experience.

“It had a huge lobby area that was designed to hold as many people as the auditorium,” Clem said. “At the beginning, the Continental had a policy of selling only fine candies and special drinks rather than the usual sort of concessions that most theaters sold.”

“Unfortunately,” Brown added, “the family that built the Continental made the decision to keep it a big, single-screen theater. And this was right around the time that the industry was beginning to change, and theaters with multiple screens became the norm.”

Brown said one of the discoveries made in the course of the research she and Clem did for the book was that, while a great deal of material could be found for the grand movie houses of the past, there was a paucity of photos for theaters after about 1965.

“I think it’s partly due to the fact people think that museums are only interested in things that are ‘old,’” Brown said. “There are some theaters that we wanted to include — the Fox Theater (at 51st Street and Harvard Avenue), for one, and the Park Lane (51st Street and Sheridan Avenue), for another — that we couldn’t have good images of when they were in operation.”

The book draws from the Tulsa Historical Society’s archives — it includes more than 200 images — as well as contributions from Tulsans who shared their photographs and, more importantly, their memories of patronizing, or working at, the city’s movie houses.

One of those stories concerns that pipe organ at the Orpheum. During the theater’s final days (it closed in 1970), former Tulsan Dennis Scott worked there as an assistant manager. Scott was also an organist and took every opportunity to play the theater’s organ.

“One day he was coming back from a lunch break and saw these two men moving the organ console out of the theater,” Clem said. “He asked them what they were doing, and they said they knew the theater was closing and they had bought the organ.”

Thirty years later, Scott, who was living in Chicago, came across a notice in a magazine that someone in Texas was wanting to sell an organ console that had “once been in a movie theater in Tulsa.”

“It turns out,” Clem said, “the man who placed the ad was the son of the man who bought it, who was helping his dad load it into their truck that day in 1970. When Dennis contacted him and told the story, he said if Dennis would come to Texas, he’d just give him the console. So the Orpheum’s organ console is now in Chicago.”

While that bit of Tulsa movie theater history managed to be saved, Clem and Brown agreed that it is unfortunate that so many of the movie houses in the book have been eradicated from the city’s landscape.

The “Big Four” movie palaces that dominated downtown Tulsa from the 1920s to the 1970s — the Ritz, the Orpheum, the Rialto and the Majestic — were victims of the wrecking ball of progress. The site of the Delman is now a drug store, while its Brookside counterpart, The Brook, is now a restaurant. Chain restaurants and motels cover what once was the site of the Continental.

“It’s really a sad thing,” Clem said. “Tulsa had some of the most beautiful theaters in the country — because of the oil money that was coming in, because this has always been an arts-forward city. It’s really something of a shame that not one of them has been saved.”

Steve Clem and Maggie Brown will be featured at a special event to launch their book, "Tulsa Movie Theaters," at 6 p.m. Thursday, July 22, at the Tulsa Historical Society & Museum, 2445 S. Peoria Ave.

Clem and Brown will give a presentation about some of Tulsa's classic movie houses, followed by a book signing. Copies of the book will be available for purchase.

The Rolling Stones discuss if 2021 tour will be their last

Circle Cinema was a film location in the 1983 Francis Ford Coppola movie.

Tickets are $15 per carload.

4 fall movies that celebrate the beauty of autumn

Should you be in need of streaming something that conjures up rustling leaves and pumpkin-adjacent hues, here are four lovely possibilities.

The Orpheum was one of the “Big Four” theaters in downtown Tulsa in the 1920s.

Steve Clem and Maggie Brown pose with some of the many photographs used their new book about Tulsa's movie theaters. Behind them is an image of the interior of the Ritz Theater, which was demolished in 1973.

The Will Rogers Theater on 11th Street was a streamline art deco-style movie theater that opened in 1942 and closed for good in 1977. It was demolished for a church parking lot in 1986.

The Rialto in its heyday was originally one of Tulsa's "Big Four" theaters, along with the Orpheum, the Ritz and the Majestic. It had several locations before finally being torn down in the late 1970s.

The Majestic was among the “Big Four” theaters in downtown Tulsa.