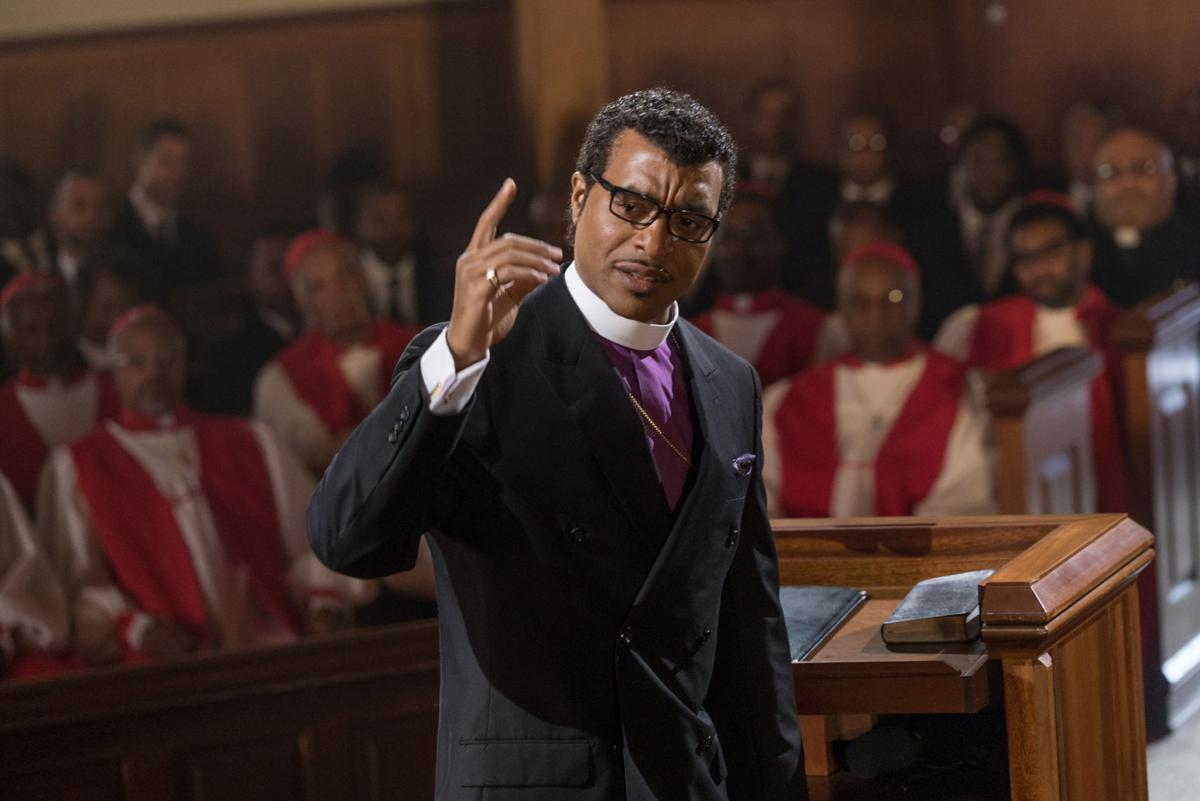 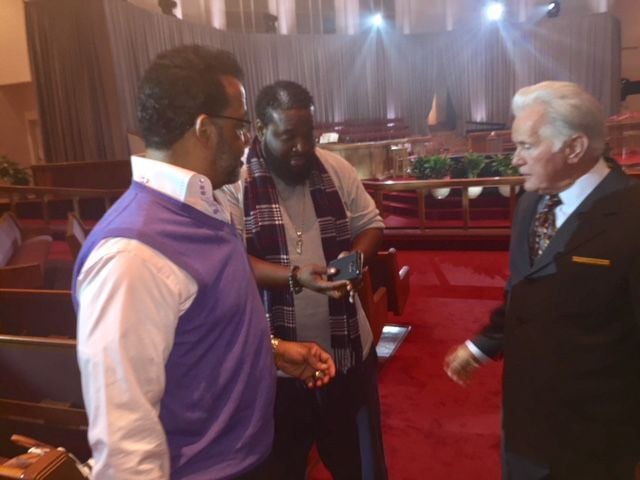 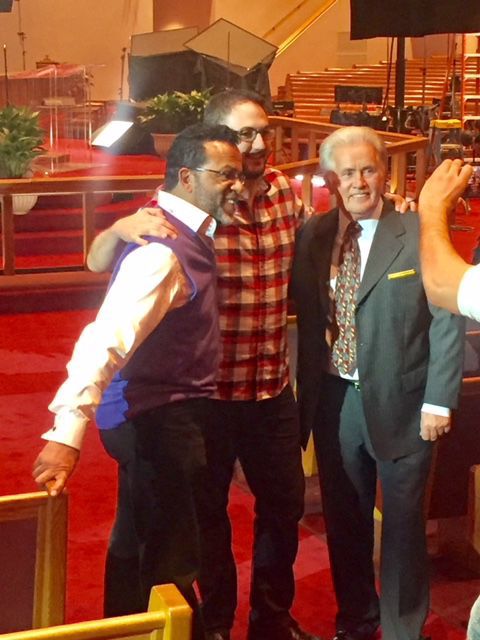 A decade after Hollywood first approached Bishop Carlton Pearson about making a movie on his epic fall from evangelical grace, the Tulsa minister got to see it on the big screen at the Sundance Film Festival.

Pearson and his family were at the event in Utah to watch the world premiere of the film, “Come Sunday,” featuring Martin Sheen as Oral Roberts, Chiwetel Ejiofor as Pearson and Danny Glover as his uncle.

The movie begins in the early 1990s when Pearson was pastor of Higher Dimensions, one of Tulsa’s largest and best-known charismatic churches. He was on the Oral Roberts University board, a frequent guest on national Christian television and host of the Azusa Street conference that brought huge crowds and some of Christendom’s biggest names to Tulsa.

Then Pearson did the unthinkable.

He began to preach that there is no hell, that Christ’s death and resurrection purchased salvation for all mankind, and that because of that, all people would go to heaven, a form of universalism that stood in sharp contrast to traditionally accepted Christian beliefs.

National leaders called him a heretic. Invitations to be on Christian television stopped. Attendance and giving at his church on South Memorial dwindled, and in 2003, he lost the building.

A few hundred of his several thousand members stayed with him, meeting first at Trinity Episcopal Church downtown and then at All Souls Unitarian Church. He later moved to Chicago, and then returned to Tulsa. He thinks the film captures well what happened to him in Tulsa.

“Come Sunday” is expected to be released in limited theaters this spring, and then on Netflix. Check out some of the early critical responses to the film:

Developed from a story broadcast on Ira Glass' long-running public radio show "This American Life" ... "Come Sunday" is a mesmerizing contemplation of the clash between rigid dogma and considered reinterpretation. The fact that it comes down on the side of mind-opening inclusion makes it an especially timely discussion in the current national climate.

This is a rare film about an evangelical church from outside the faith-based channels that questions without either judging or condescending. That respectful approach, along with stirring performances from a terrific cast led by Chiwetel Ejiofor, should draw both religious and secular audiences to this consummately crafted Netflix original.

With unstinting compassion, the film traces the dismantling of all that Carlton and his congregation have built together, never losing sight of the personal cost to him as he continues to wrestle with his beliefs.

“Come Sunday” may be the perfect movie for Netflix. Too fair-and-balanced to have come from the faith-based community and far too churchy to have gotten the blessing of any studio, director Joshua Marston’s exceptional, serious-minded adaptation of a 2005 episode of NPR’s “This American Life” recognizes the dramatic and ultimately uplifting potential in the true story of a Pentecostal bishop who lost both his flock and the backing of church leaders after he began to question one of the core beliefs of his religion — namely, the notion that souls must be “saved” in order to avoid eternal damnation.

For those who choose to sample “Come Sunday,” they’ll be rewarded not only by the compelling story of a devout Christian wrestling with his faith but also by one of the great screen performances of recent years, as “12 Years a Slave” star Chiwetel Ejiofor captures both the charismatic passion and softer-voiced introspective side of bishop Carlton Pearson, whose preaching style was unique enough to bring black and white worshipers together under the same roof.

Like the true-life evangelist that inspired it, “Come Sunday” preaches a message of tolerance and inclusivity that couldn’t be more relevant in a country grappling with its newfound conservatism.

Chiwetel Ejiofor is electrifying from the pulpit in this biopic of Pentecostal bishop Carlton Pearson. It’s no wonder that Pearson’s ministry packed them in each week, television cameras in tow.

The first half of "Come Sunday" is fascinating, but unfortunately director Joshua Marston and screenwriter Marcus Hinchey, working from a This American Life radio segment, tee up the ball but then fail to take a swing. ... It basically goes: “Recant what you said about hell!” “No.” “Well, OK.”

After this there’s still plenty of movie to go, but the air is out of the balloon and there’s not much drama to refill it. At the end of it all, "Come Sunday" is a story about a guy went off script and lost his job due to market forces. This sort of thing happens all the time. There’s not much scrutiny at the business of religion in the film, nor is there a reckoning of the church’s deplorable homophobia.

Director Joshua Marston’s fictionalization of Pearson’s epiphany is certainly an intriguing story, and Chiwetel Ejiofor delivers an unsurprisingly terrific performance as Pearson, but even though it’s told well, this particular tale struggles to fill out the runtime of a feature-length film.

This is certainly an interesting story, and indeed Marcus Hinchy’s script for Come Sunday is based on an episode of This American Life, but throughout the film it’s hard not to think the story makes a better episode of that program than a feature film. Marston directs the film with care, and the performances by Ejiofor and standout Lakeith Stanfield — as Pearson’s closeted choir leader — are pretty outstanding, but as the film moves along it starts to run out of steam. Things just kind of happen, and while some may get more mileage out of Pearson’s crisis of faith than others, once he makes his proclamation we’re left with what’s essentially a two-act denouement.

The film is, however, refreshingly un-hagiographic, as it does dig a bit into Pearson’s pride and arrogance that may have led some to question his testimony. But it feels as though if the script had focused on this aspect of Pearson’s character a bit more, we might have gotten something more dynamic and complex. As is, while the film doesn’t portray Pearson as a saint, it portrays him as a fairly uncomplicated character, all things considered.

Watch a clip from the film:

Chiwetel Ejiofor plays the prominent Tulsa minister who lost it all when he began to preach that there is no hell. Martin Sheen plays Oral Roberts. "It's like he was channeling him," Pearson says.