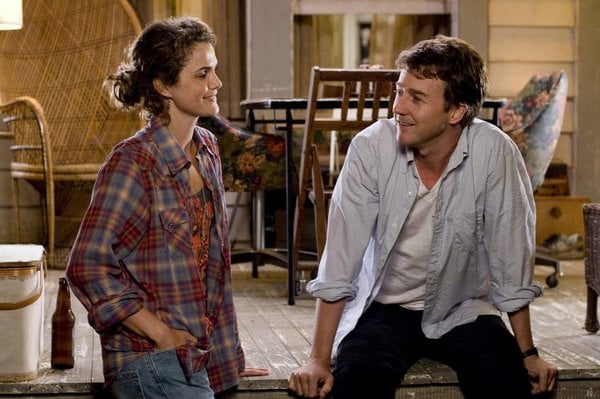 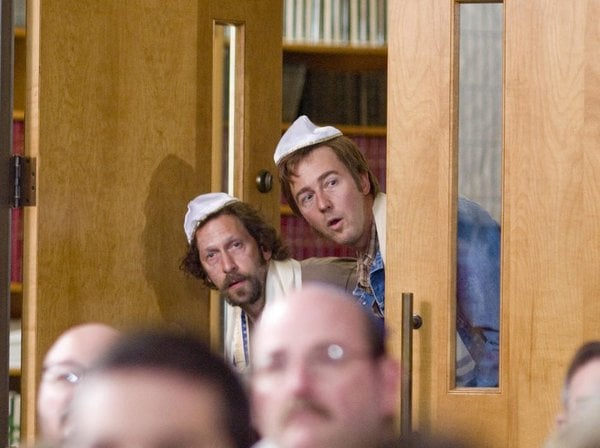 "Leaves of Grass" is not a Walt Whitman movie about poetry. This is Tim Blake Nelson's affectionate and curious vision of his native Oklahoma, and what he sees makes for a uniquely restless, ribald motion picture.

Nelson is likely best known as an actor for his role in the Coen brothers' film "O Brother, Where Art Thou," and he embraces their sense of multiple styles in making a film that is by turns a marijuana comedy, a suspenseful crime tale and an analytical philosophy short course.

These ideas at times go together about as well as the official state meal that includes chicken fried steak, barbecued pork and strawberries. But a degree of patience with this mellow, quirky look at living life on one's own terms is ultimately rewarded.

Some may think that "Leaves of Grass" is best enjoyed with a good smoke. The Holland Hall graduate and writer-director has made a film that has cult favorite written all over it.

Nelson was smart enough to have his pal Edward Norton in mind when writing the part of the lead characters. Bill and Brady are identical twin brothers, and the only thing better than one complex performance by Norton is two such creations.

Both brothers are brilliant, and they could hardly be more different: Bill is a classics professor, a rising "great mind" in the brainy community who's being wooed by Harvard. Meanwhile, Brady is a marijuana grower in southeastern Oklahoma.

Bill has long distanced himself from his Oklahoma roots, going so far as to eradicate any hint of an accent and estranging himself from his criminal screw-up of a brother. Meanwhile, Brady has a problem of such severity - he owes money to a Tulsa druglord who hides his criminal activities behind his Jewishness - that he must fake his death to force his brother home to the Sooner state.

"He got shot with a crossbow," Bill plaintively tells his secretary, to her confusion. "They're inexplicably popular where I come from."

Nelson himself lives in New York City, but he is consistently pulled back to Tulsa by family and his love of his state and roots. Throughout the film, we watch the contradiction of cultures examined.

One example of this is Nelson's unique view of Tulsa Jewishness, such as Richard Dreyfuss as the druglord. This is a man who uses a menorah as a weapon and seeks to have his name put on Tulsa's buildings. The writing of these scenes is both informed and gleefully taken to extremes on Nelson's part.

Nelson embraces Oklahoma's unique eccentricities. A love of the arts and outdoor sports is combined in Keri Russell's character, a Walt Whitman-quoting, catfish-noodling poet and love interest for Bill.

The film is punctuated by violence on several occasions in the second half of the film, and Nelson consistently finds a balance to such harshness with gentleness like tender moments between Russell and Norton.

In one scene, they are sitting on a rural home's front porch with friends, with beer flowing, music chilling the atmosphere and Bill mellowing from toking on one of Brady's turbocharged joints. The couple's flirty little dance of words, of romantic mystery and of her setting his priorities straight (the women in this film are all smarter than the men) is as beautiful in its simplicity as in its execution.

The film is rich in its detail of Oklahoma manners and lifestyles that should make local audiences warmly embrace the picture. Multiple performances stand out, such as Melanie Lynskey as Brady's pregnant fiancee, who sets the film's events in motion by demanding that, with their first child on the way, he quit the pot business.

A character played by Josh Pais is bothersome, an orthodontist who makes a connection between the brothers. He's a minor character who comes to play too vital a role in the story, I decided, because his making the connection seemed implausible, and without that connection the third act would fall apart.

"Leaves of Grass" - a reference to Whitman's idea of a life lived at one's own poetic pace, as well as to the wacky weed - leads to a conclusion that is predictable in its outcome, if not its path in getting there.

Which is a lot like life, when you think about it. Nelson, at age 45, has clearly been thinking about it.

The news was announced Thursday by Regal Cinemas.

Reid will be joined at Circle Cinema by Clifton Taulbert for a Greenwood documentary and a screening of "Once Upon a Time When We Were Colored."

Ray Park and other celebrities will be present at the show, scheduled May 8-9 in Oklahoma City. Park will be a Saturday-only guest.

"Billy Jack" starred Tom Laughlin as a Vietnam War veteran who struggled to walk the line between pacifism and being a protector. The cult blockbuster will be shown 2 p.m. Saturday, May 1 at Circle Cinema.

The virtual season will end Tuesday, May 11.