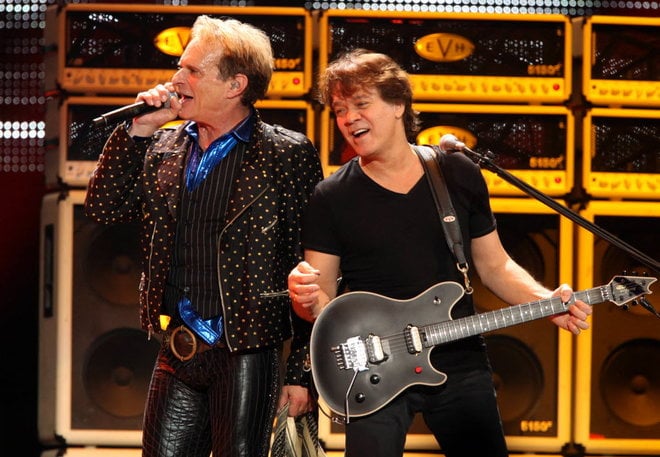 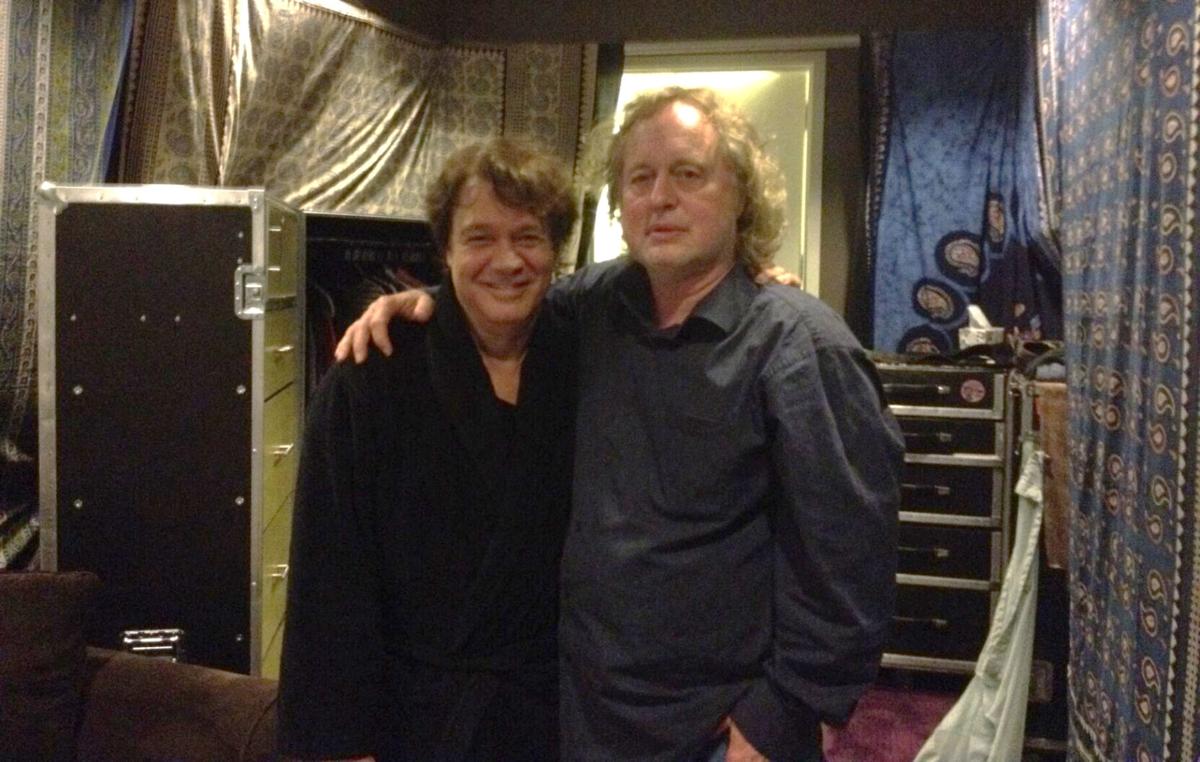 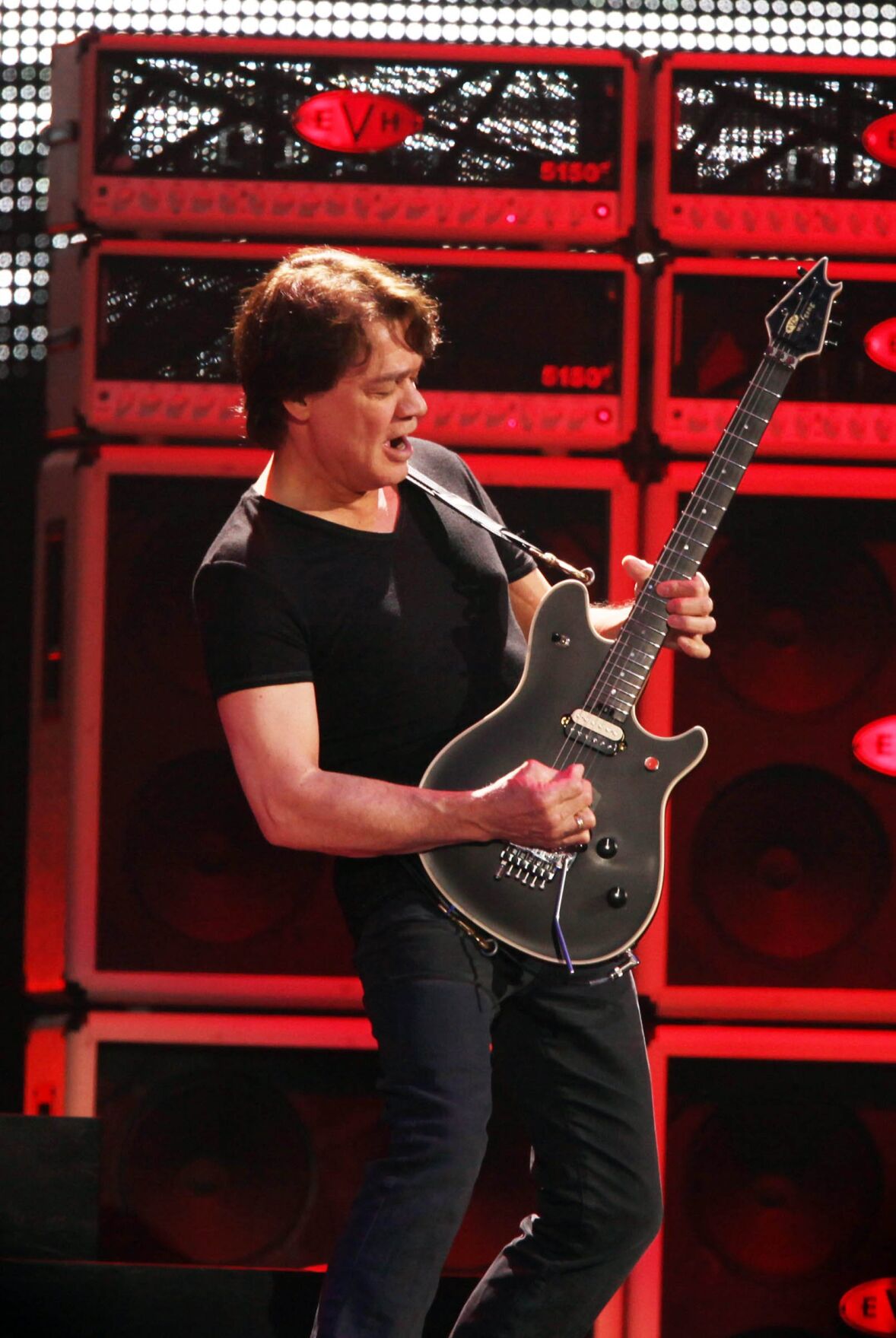 Van Halen performed in Tulsa for the last time in 2012 at BOK Center. 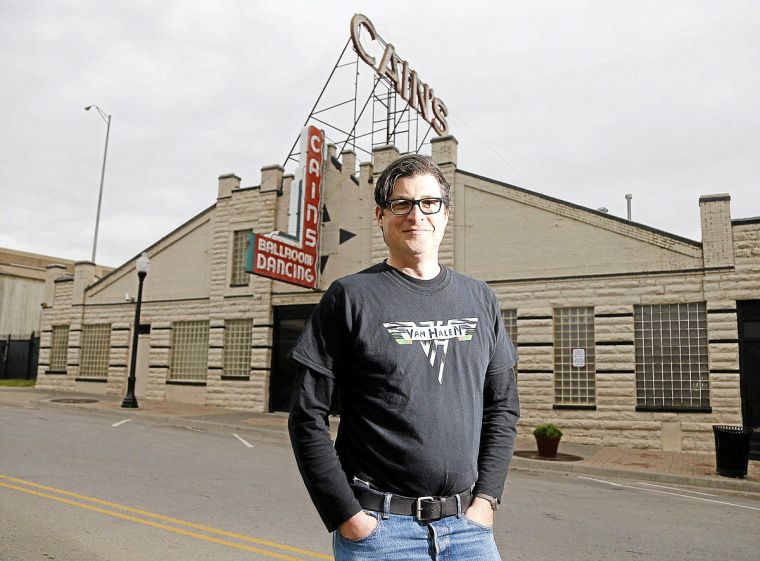 Greg Renoff is a Tulsa author who became an unofficial Van Halen biographer after writing “Van Halen Rising” and a book about Ted Templeman, who produced the band's first six albums. 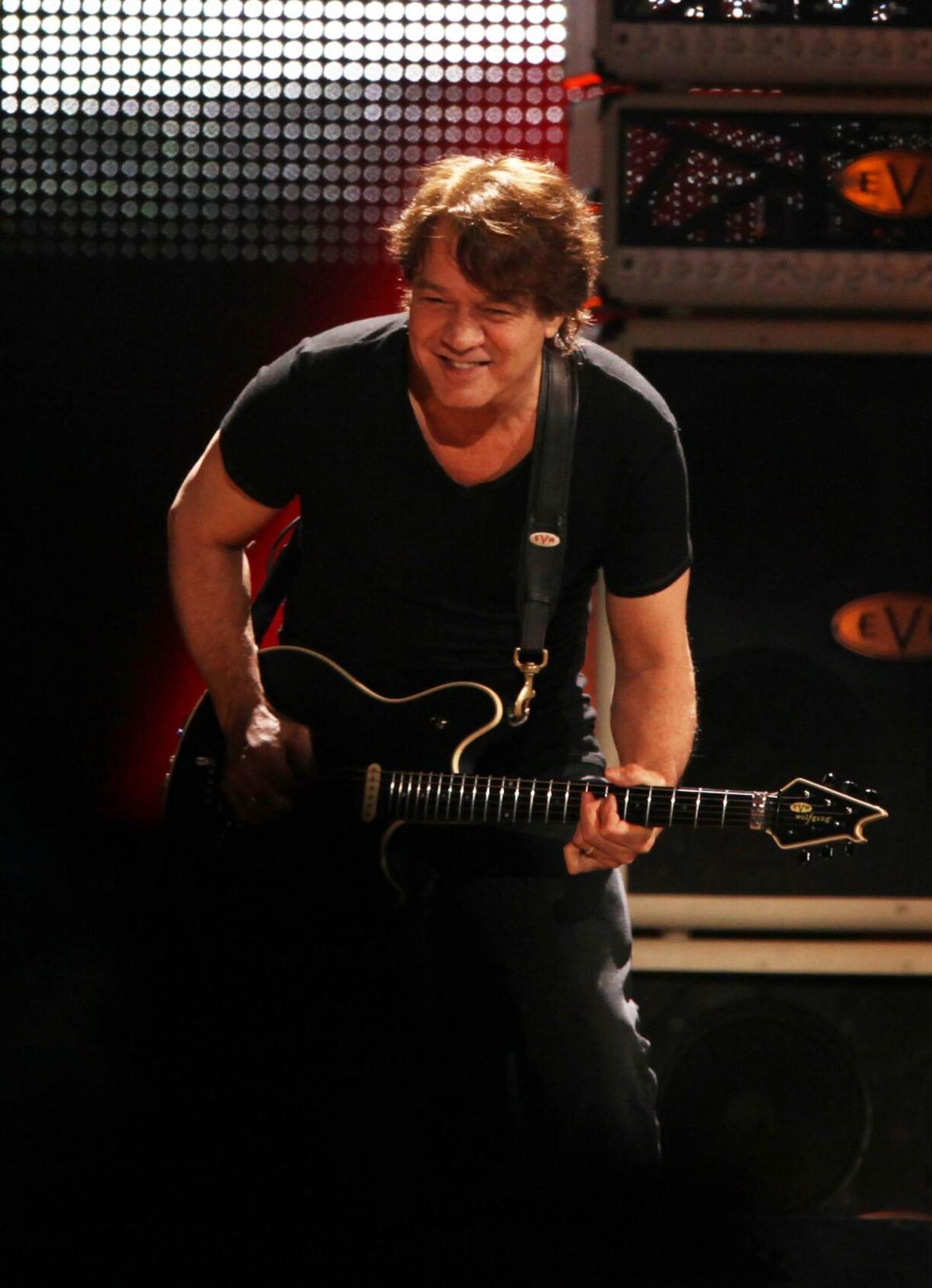 Van Halen performed in Tulsa for the last time in 2012 at the BOK Center.

A guitar legend had something to say when Oklahoma music artist Steve Ripley died in 2019:

“For more than 35 years I’ve been fortunate to call Steve Ripley one of my true friends. Steve is many things. Part genius, part musician, part inventor and many other great things, but my favorite thing about Steve is the wonderful, kind, humble human being he is and always will be. I love Steve with all my heart and am proud to know him.”

The person who said those words — Eddie Van Halen — died Tuesday at the age of 65.

This is a story about the Van Halen-Ripley friendship.

How did Van Halen feel about Ripley? Eddie named a song after his friend. The instrumental song “Ripley” (you can seek it out on YouTube) was used in the 1984 film “The Wild Life.” Granted lyrics, “Ripley” morphed into the song “Blood and Fire” on Van Halen’s last studio album, 2012’s “A Different Kind of Truth.”

Van Halen toured in support of the album. The tour, which reunited Eddie and Alex Van Halen with vocalist David Lee Roth, made a May 1 stop at Tulsa’s BOK Center. If you had gone backstage that night, you might have seen Eddie catching up with an old pal, Ripley. Or maybe you wouldn’t have seen them since Ripley’s wife, Charlene, cleared the room so the buddies could get some quality time.

“I thought they should be able to talk without us all around,” she said.

The conversation happened because of Leon Russell, or his carpenter, depending on how far back you want to go with the background details.

Ripley, best known as the leader of the country-rock band The Tractors, was a successful recording artist in his own right and (how’s this for music cred?) played guitar while recording and touring with Bob Dylan.

Multitalented, Ripley worked as a recording engineer for Russell in California during the 1970s and 1980s. Ripley loved that he got to stick his head into Russell’s grand piano and hear all that goodness.

“It was the most wonderful stereo sound that Steve would try to get with the placements of the microphones,” Charlene said. “He thought, ‘Why can’t a guitar have that same thing? Because guitars aren’t really in stereo.”

Ripley viewed it as a challenge. He “chopped up” a paisley guitar and figured out a way to make each string play through a different amplifier.

Then, thanks to a drummer (Jim Keltner) with Tulsa roots, Ripley was granted his first opportunity to play with Dylan.

“I only had my chopped-up paisley six–channel guitar, and I thought it might be a bit presumptuous to play through six amps in front of Bob Dylan,” Ripley once told Vintage Guitar magazine.

Ripley bought a mixer on the way to rehearsal and figured out a way to make his creation work with only two amplifiers.

“That’s when it was kind of a ‘eureka!’ thing,” Charlene said. “He went on tour with Bob and when he got off tour with Bob, that’s when he designed the stereo guitar. The first one he sold was to JJ Cale. He sold one to (Toto’s) Steve Lukather. He sold one to Fred Tackett, who was a member of the Dylan band he was in.”

After Ripley sold guitars to those folks, all he really wanted to do was get one in the hands of Eddie Van Halen, according to Charlene.

"And then Frank the carpenter showed up," she said. "Seemed meant to be."

Ripley hired Russell’s carpenter to help with a project. The carpenter said he had been building a recording studio for another guy. That other guy was Eddie Van Halen. A meeting was arranged. Van Halen immediately decided he needed one of those Ripley guitar creations. Impressed, Van Halen name-dropped Ripley in interviews. The head of Kramer guitars took notice and Ripley secured a guitar deal.

Van Halen’s first Ripley guitar was simple in comparison to the next. What if we did this and this and this? The result was a guitar that Van Halen nicknamed Super Pluto.

“It’s the more advanced Ripley guitar,” Charlene said, adding that Dweezil Zappa and Ry Cooder also are owners of a Super Pluto-type guitar. “It had like a big effects box that went with it and it did all kinds of crazy stuff.”

Van Halen used his Ripley when he recorded “Top Jimmy” for the album “1984.” He, of course, played it on “Ripley.” The guitar and friendship endured for decades. At the twilight of that friendship, they had cancer battles in common.

“When Steve was sick, Eddie called him often,” Charlene said. “He called him when my Steve was dying and it was the most beautiful message. Ed sent flowers to Steve’s memorial. The very last picture on Steve’s Instagram is a thumbs-up picture and that was a picture that Steve took and sent in a text message to Ed. They were good friends up to the very end.”

Eddie has other Oklahoma connections. Tulsa author Greg Renoff earned the title of unofficial Van Halen biographer after writing the 2015 book “Van Halen Rising” and a 2020 book about Ted Templeman, who produced the band’s first six albums. For a photograph to accompany a 2015 Tulsa World story, Renoff posed in front of Cain’s Ballroom, where Van Halen performed in 1978 and 1979.

In the Templeman book, the producer said this about his first time watching a then-unknown band called Van Halen: “Right out of the gate, I was just knocked out by Ed Van Halen. It’s weird to say this, but encountering him was almost like falling head-over-heels in love with a girl on a first date. I was so dazzled. I had never been as impressed with a musician as I was with him that night. I’d seen Miles Davis, Dave Brubeck, Dizzy Gillespie, all of these transcendent artists, but Ed was one of the best musicians I’d ever seen live.”

Not all musicians become the best of friends. Why did Ripley and Van Halen hit it off? Charlene chewed on the question and provided a response.

“When Steve first started talking to him, he would tell Ed he loved him,” Charlene said, adding that Van Halen was initially taken aback because men don’t usually say “I love you” to each other.

“But Steve said that to Ed, and I think it meant a lot. It wasn’t something he was used to, maybe even from his family or his other friends.”

The words were apparently contagious.

Charlene said Ed, at the end, always told her husband, “Love you, Steve!”

“I think Steve may have taught Ed something about love,” she said. “Maybe he just needed some Okie love.”

From my very first moments, the name of Eddie Van Halen has been woven through my life. My dad had a real knack for seeking out and getting around the very best. Ed was often on the phone with my dad, talking about guitar stuff and who knows what else. I was much, much older when I realized any of this was any big deal to anyone.

What I am thinking of most was the incredible friendship he shared with my dad. They loved each other so much. As an adult, my parents shared with us how much he helped the Ripley family over the years in various ways. I always knew in the back of my mind if we ever needed him, Ed would help, and he did.

Through different phases of life, they always remained really close and talked up to the very end. It was quite a sight to witness the “brotherly love fest” (my dad’s words) between these two when we saw Ed at the BOK center in 2012. I remember they hugged a long long time.

I found this comment from my Dad on a post of mine after that concert: “Some sort of completed circle last night with Ed and the family. It feels like a completed circle — though I hope it continues to swirl. He’s helped us a great deal over our lives — including paying for our move back to Oklahoma in ‘86 — never asking for anything in return.”

As chef and owner Sian Thang said, "I have confidence that what we do is the best. That is why our sign says, 'Best Sushi and Kitchen.'"

Scott Ellsworth hadn’t planned on writing another book about the 1921 Tulsa Race Massacre.

The country music superstar from Checotah won Video of the Year for her "Hallelujah" collaboration with John Legend.

The CMT Music Awards will air Wednesday, June 9. An Oklahoman has won Video of the Year in 11 of the past 18 years.

Van Halen performed in Tulsa for the last time in 2012 at BOK Center.

Greg Renoff is a Tulsa author who became an unofficial Van Halen biographer after writing “Van Halen Rising” and a book about Ted Templeman, who produced the band's first six albums.

Van Halen performed in Tulsa for the last time in 2012 at the BOK Center.