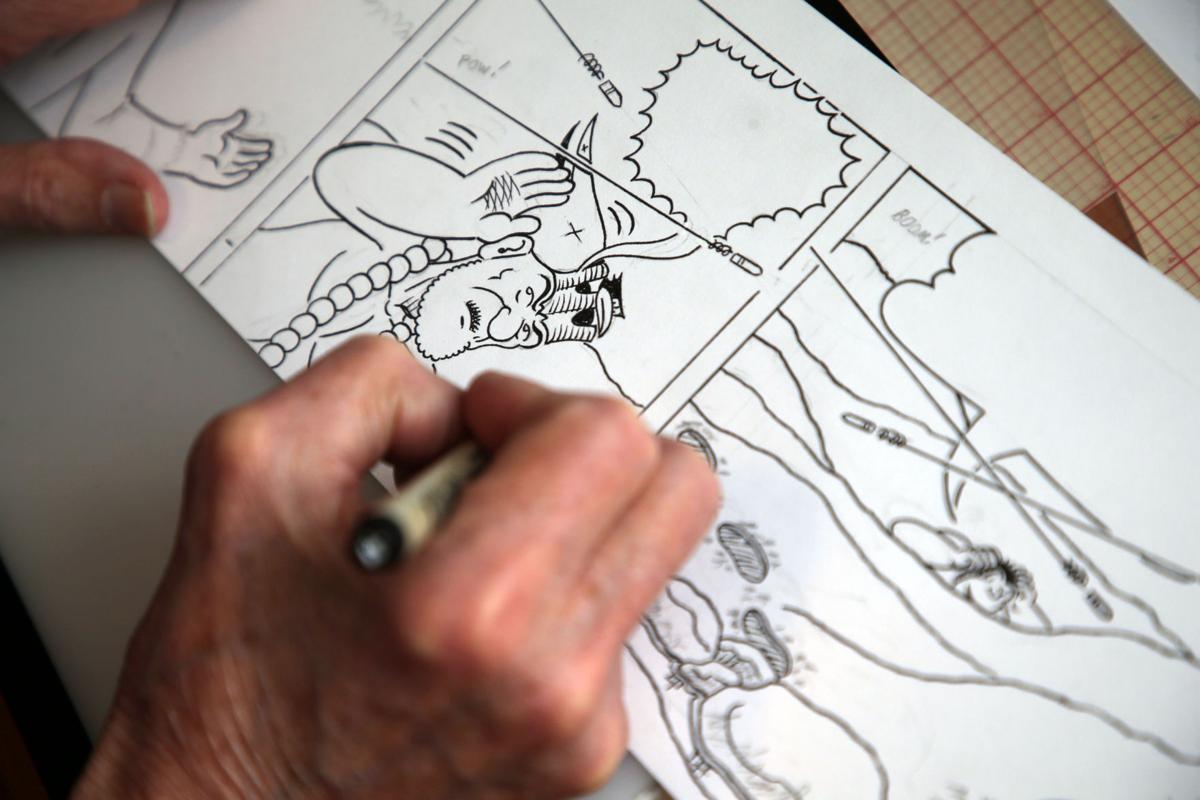 Carole Bender, who teams with husband Jack Bender to document the adventures of Alley Oop, works on the comic strip at her home in Tulsa. CORY YOUNG/Tulsa World 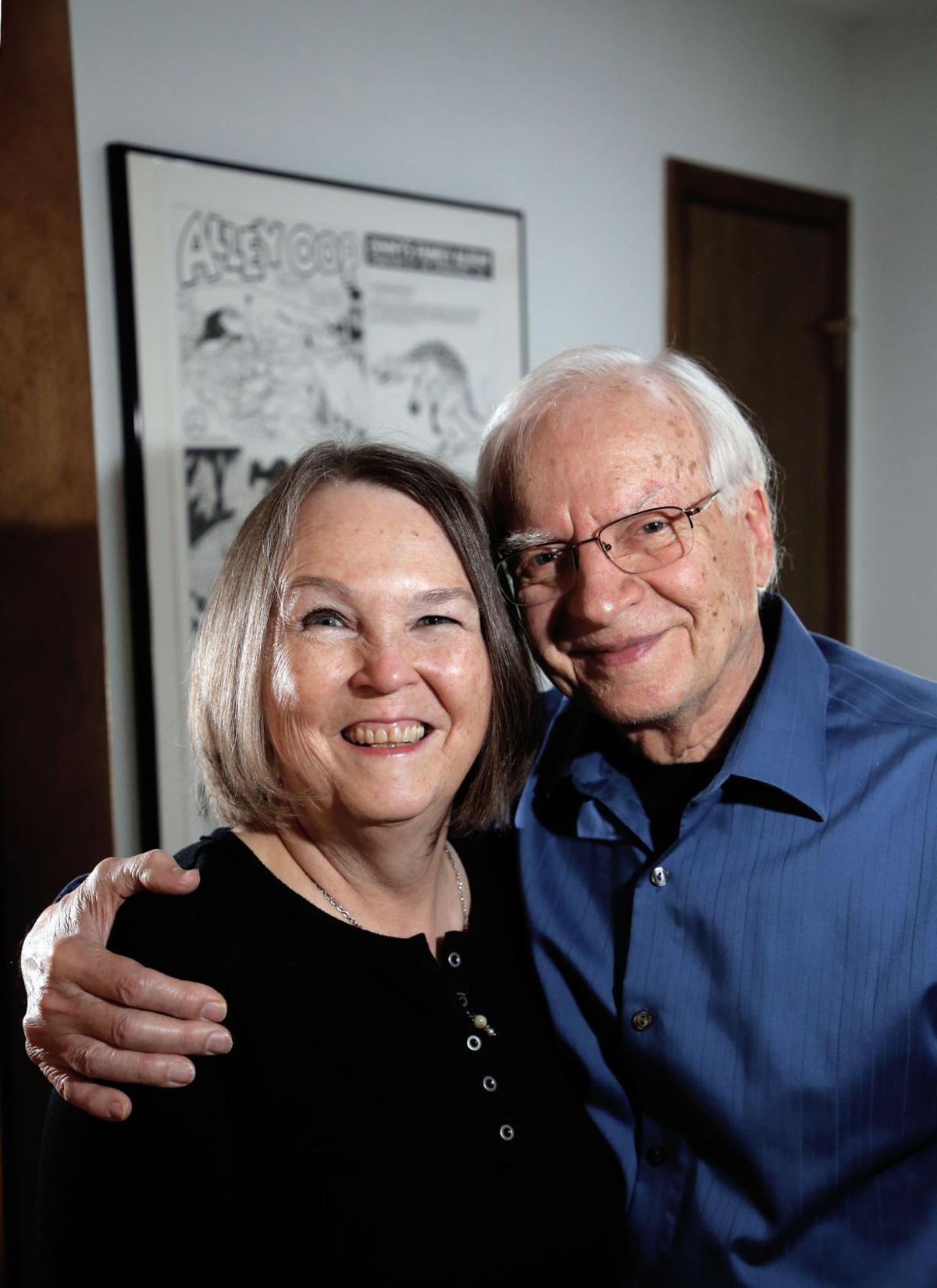 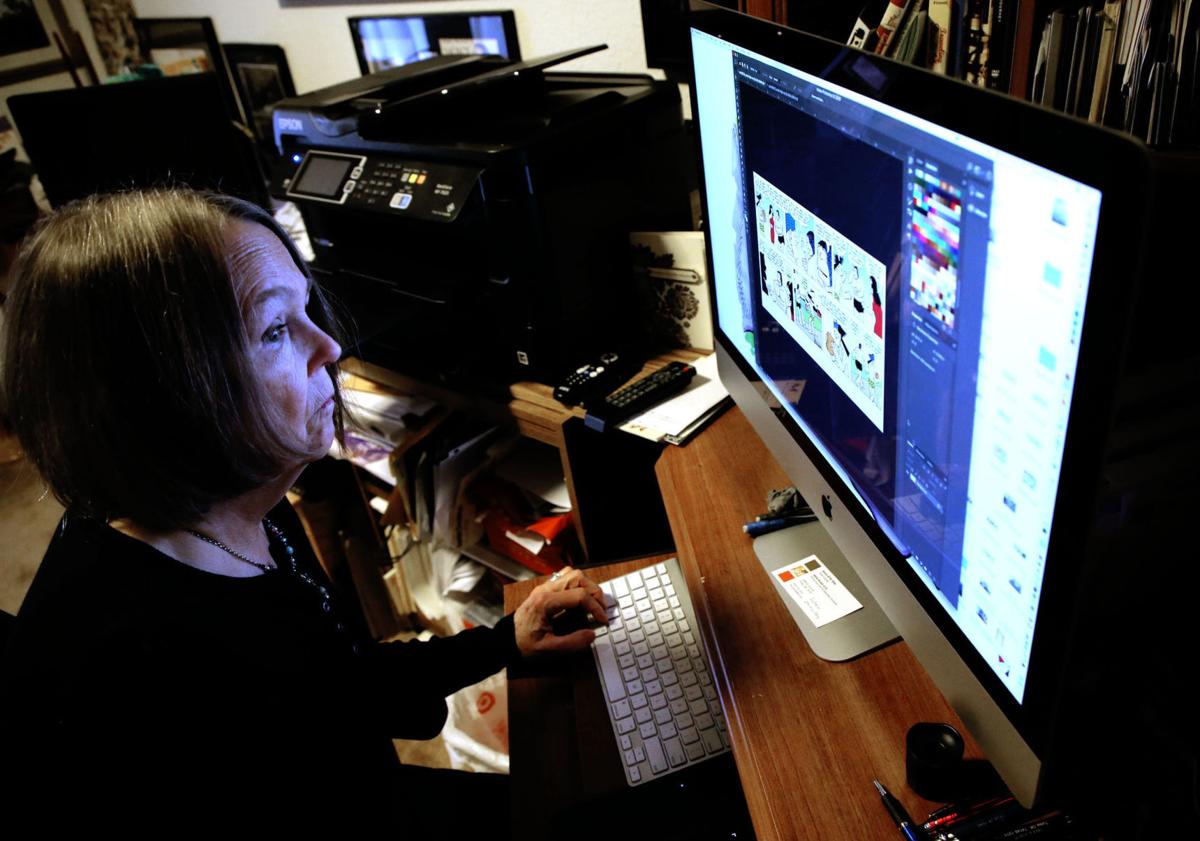 Carole Bender, who writes Alley Oop and handles other chores related to the comic strip, works at a computer in the studio of her home. She created an Alley Oop font for lettering. CORY YOUNG/Tulsa World 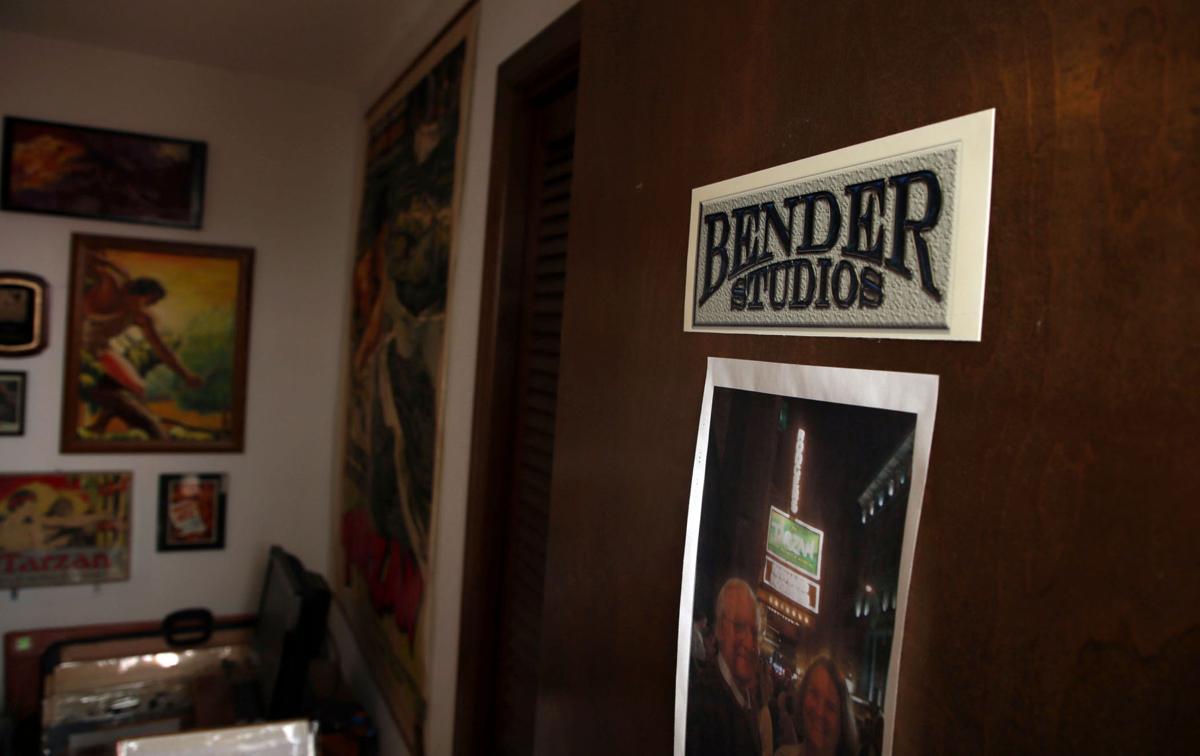 A sign says reads Bender Studios inside the home of Jack and Carole Bender, the creators of the comic strip Alley Oop. CORY YOUNG/Tulsa World 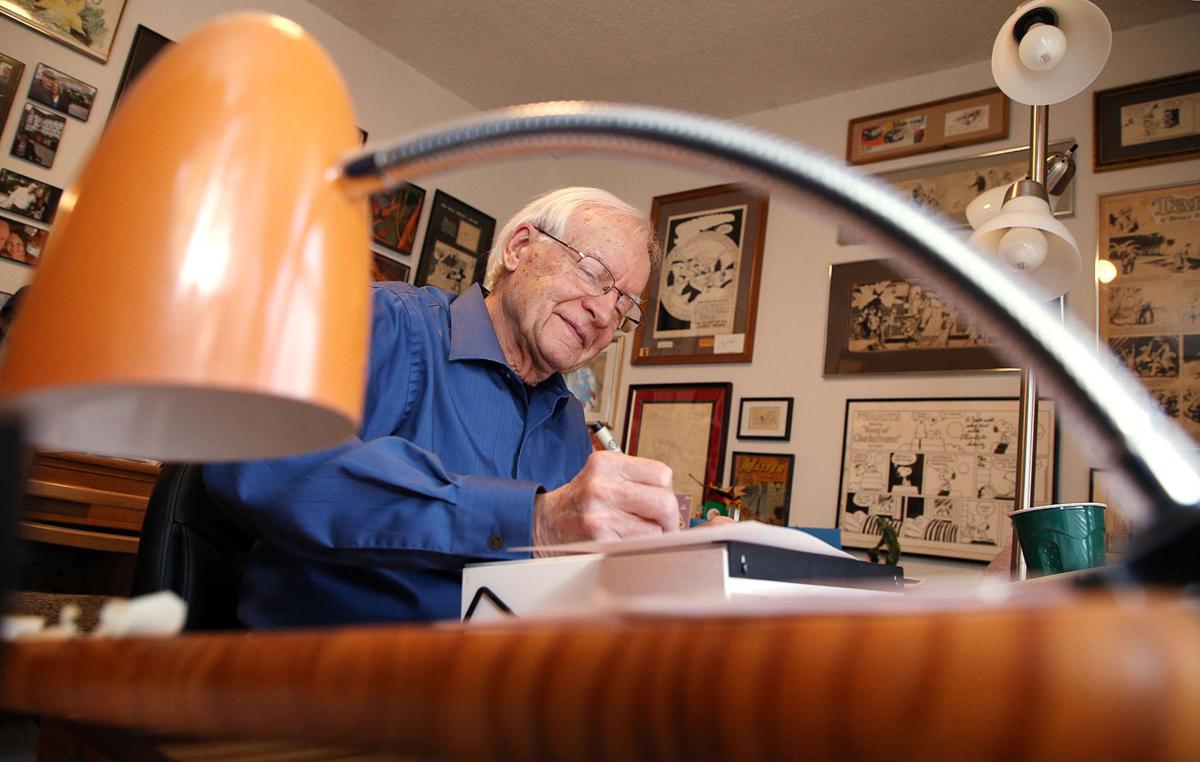 Jack Bender and wife Carole took over the Alley Oop comic strip after the retirement of Dave Graue in 2001. Bender previously illustrated the strip while working with Graue. CORY YOUNG/Tulsa World 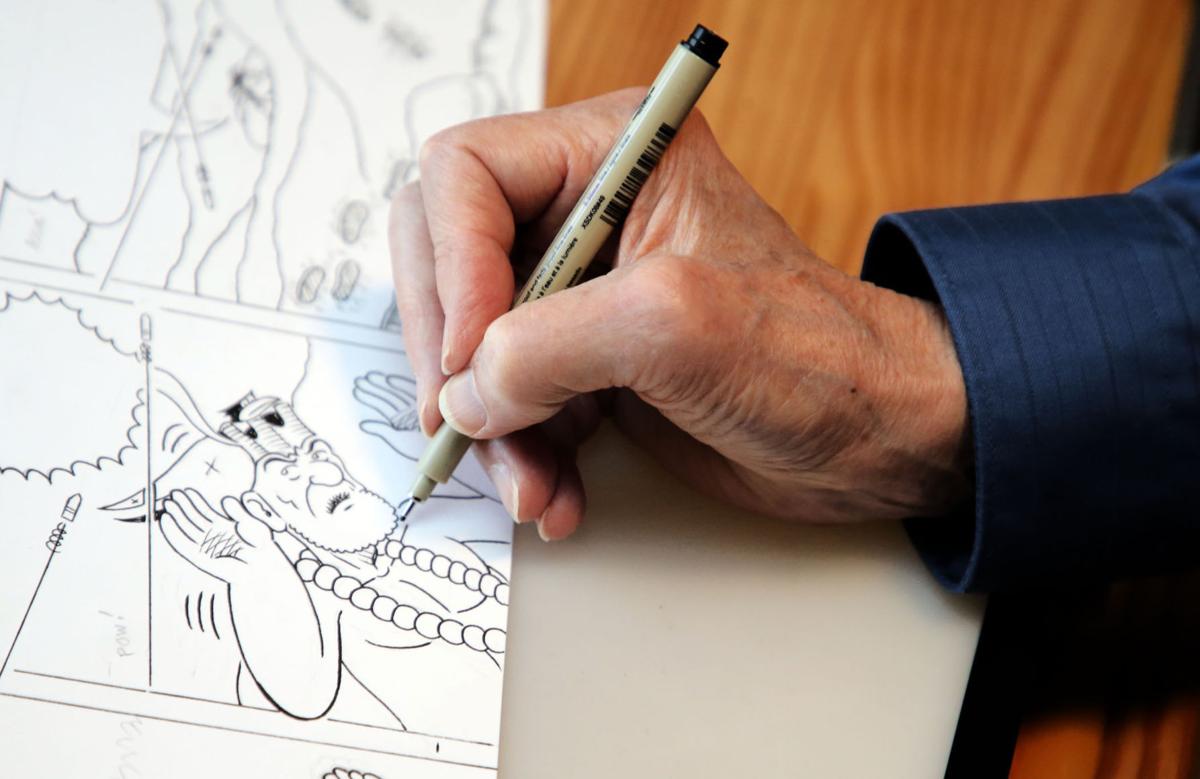 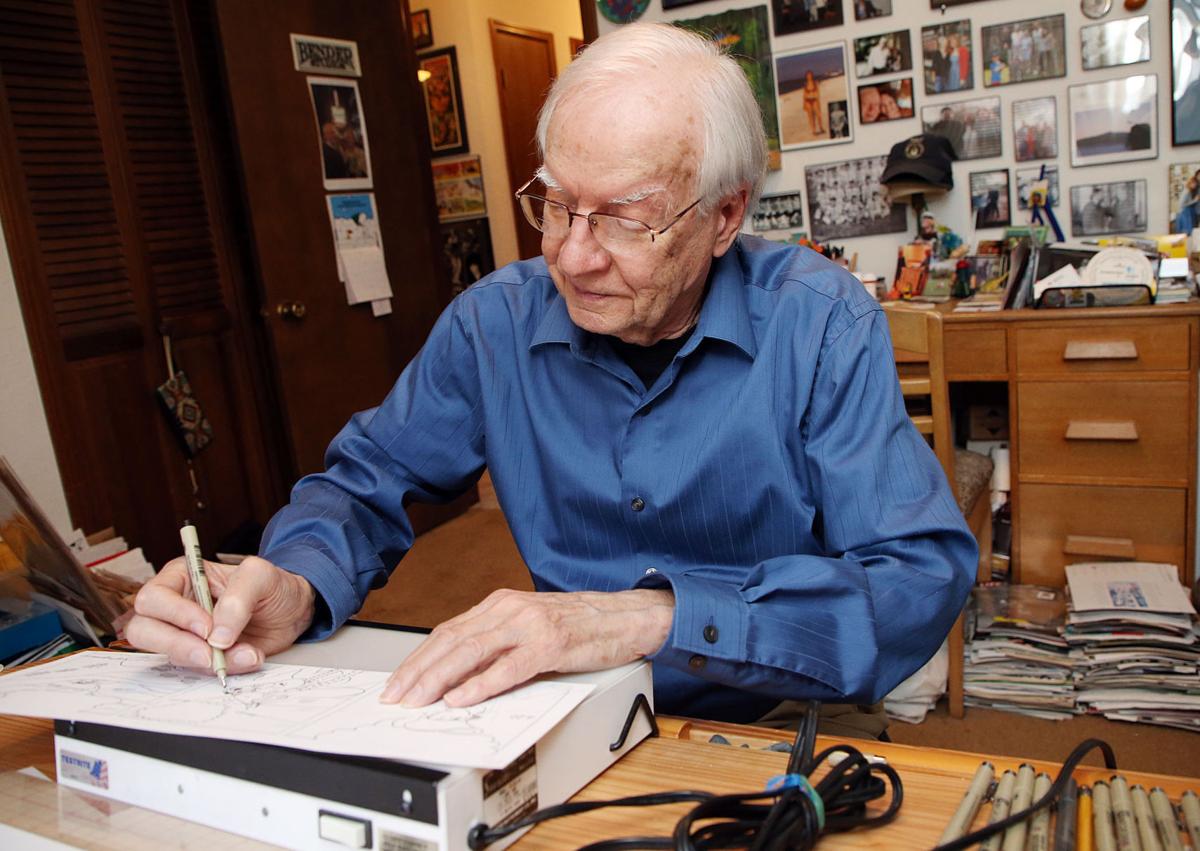 Jack Bender crafted a respected body of work as a sports cartoonist and political cartoonist before taking the reins of the Alley Oop comic strip. CORY YOUNG/Tulsa World

There are many things that might attract a boy to a girl, but, in this instance, he was impressed by her letters.

He was attracted to her calligraphy, the art of lettering. She had a way with the alphabet.

The “he” is Jack Bender. The “she” is Carole Bender. They’re a husband-and-wife team who create the syndicated comic strip Alley Oop from their Tulsa home.

Alley Oop, which chronicles the adventures of a caveman from the prehistoric kingdom of Moo, has been around since the 1930s. If the strip was a relay race, you could say the Benders are running the third leg.

V.T. Hamlin created Alley Oop in 1932. Stewardship of the strip was passed to his assistant, Dave Graue, in the early 1970s. Jack Bender, formerly Graue’s assistant, partnered with Carole to take over the strip after Graue retired in 2001.

Seventeen years later, the Benders are still running with the baton, or, in this case, Alley Oop’s war hammer. All things considered, maybe they’ve already won the race. Jack said a former editor, citing a bunch of examples, once told him husband-and-wife teams generally don’t work.

“But, anyhow, it has worked for us,” he said while seated next to Carole during an interview at their home.

It’s your basic boy-meets-girl-meets-dinosaur story but maybe not in that exact order. Both have been reading the funny pages and drawing since they were tiny, but they weren’t drawn together until well into adulthood.

Jack — who, like Hamlin, grew up in Iowa — landed his first professional art job when he was 15. He drew sports cartoons for his school newspaper and was so good at it that the sports editor of the local newspaper asked if he would like a gig drawing sports cartoons (popular during that era) for the Waterloo Courier. He went on to craft an award-winning body of work as a sports cartoonist (his works were collected into the book “A Gallery of Iowa Sports Heroes”) and political cartoonist. He logged a 22-year tour of duty at the Waterloo Courier, choosing familiar turf over a reporting job at the Wall Street Journal.

An ownership change at the newspaper resulted in changes (indoor parking space, gone, which is a big deal in frosty Iowa) that made him decide to pull up stakes and start over somewhere maybe warmer.

Because he had friends in Tulsa, somewhere else became here — and he made the trek without promise of a job. He spent three years at a marketing company before becoming part of the Platt College faculty.

Classes were in the mornings, so Jack had afternoons free to pursue cartooning again. He (and about 125 others) replied to an ad in the Comic Buyer’s Guide when popular Mad magazine artist Don Martin needed an assistant to help with a comic strip, The Nutheads. Jack won the job.

The strip wasn’t wildly successful, but, while working for Martin, Jack was savvy enough to contact five other cartoonists who might be of the right age to need a helper. The timing was perfect. Graue needed a replacement for an assistant who had recently quit.

“Fate was on your side,” Carole said.

Carole grew up in Ponca City and has vivid memories of seeing Alley Oop in the Ponca City News during her childhood years. She copied images from the comic strips, Alley Oop included. A budding artist, she was painting likenesses of actor Vincent Price and others by the time she was 15.

Carole was all about fine arts until the realities of making a living led her to the graphic design program at Platt College. The curriculum included calligraphy, which she had been tackling for about 30 years. Other students huddled around and watched while she flexed her calligraphy muscles. Jack noticed her handiwork, too. He asked if she could learn the Alley Oop lettering style.

Jack said he and Carole didn’t really know each other at the time, but her ability to letter the Alley Oop strip gave them a reason to get to know each other. They overachieved. They got married.

Jack and Carole auditioned as a package deal to take over the strip when Graue was ready to step away. Their roles were not initially defined, but the roles were cemented over time. Now, it’s as simple as he’s the artist and she’s the writer, although she tackles other chores too.

People who meet the Benders sometimes ask this question: “Well, do you do anything else?”

That’s because those outside the industry have no idea how much time is invested in creating a seven-day-a-week comic strip. If you think they can binge-create seven days’ worth of strips in half a day and take off the remainder of the week, then you’re heavy into fantasy.

“This job is all-consuming,” Jack said. “You don’t stop.”

Jack works from about 10 a.m. until after 7 p.m. on the strip, squeezing in lunch and a one-hour nap. Carole, who can’t nod off as easily as her husband at night, sometimes climbs out of bed and works into the wee hours. “If I do get up, I’m always up until at least 2,” she said. “And, if I’m really wired, I might be up until 4 or 5.”

The Benders used to stockpile enough strips in advance to take European vacations, but they don’t go overseas anymore — and they are finding it increasingly difficult to sneak away for a weekly movie. Maybe next week?

But the sacrifice is worth it because it’s awesome and cool to shoulder the responsibility of shepherding a piece of Americana (and, as far as Jack knows, Alley Oop is the only comic strip physically produced in Oklahoma). Jack, who visited Hamlin in the latter years of the artist’s life, said he thinks about Hamlin a lot and wants to do the best he can do because that’s what Hamlin did.

Future Alley Oop stories are mapped out well into the summer and, because time travel has been part of the strip since 1939, a visit to the American Revolution is on the horizon.

Alley Oop’s current creators live under the same roof with studios in adjacent rooms. Carole said working together has strengthened their personal relationship “because it is such a bonding thing. We are joined at the hip on what we do. ... Everything we do is linked to each other.”

Jack said he and Carole “have no problem at all. I won’t say we aren’t cranky sometimes, but there is no problem.”

Simple question: Why is that?

“We don’t sit around and analyze it, but I guess probably because we have always respected each other’s talents,” Carole said. “I met him being in awe of what he did and that he did Alley Oop, and then (learned) about his career. And he has always said he has liked my art and my writing. It’s hard to get upset with someone who goes into it with respect and admiration for what you do.”

Jack said he not only respects his partner, but also is envious of her talents. When talking about her penchant for coming up with ideas, he said, “I don’t know what your IQ is, but you are really a smart person.”

“Thank you,” she said, smiling. “You see? This is why we can get along and collaborate.”

Lights on for the holidays: Find the biggest holiday events

No matter what intrigues you — vibrant light displays, Christmas markets, ice skating — these events in Tulsa and beyond offer fun for the whole family.

Olivia Jordan (some know her as Olivia Thomas from her years at Bishop Kelley High School) is the only Oklahoman to win a Miss USA pageant. She's back in her hometown of Tulsa and she's a new mom.

Nominations for the 2022 Grammy Awards were announced Tuesday. Here's a list of nominees in top categories.

Devon Allman, son of Gregg Allman, spoke with the Tulsa World about a show that will celebrate his father and the Allman Brothers catalog.

Find out where to order your Thanksgiving dinner and pies, or dine in

Many establishments offer fully cooked meals that can serve two to umpteen guests and come with instructions for reheating, while others allow one to choose items and quantities a la carte. Some restaurants also will be serving dine-in dinners for Thanksgiving.

Watch Now: Five things to do this weekend including Cody Johnson at BOK Center

Want to get out and about? Here are some suggestions.

Carole Bender, who teams with husband Jack Bender to document the adventures of Alley Oop, works on the comic strip at her home in Tulsa. CORY YOUNG/Tulsa World

Carole Bender, who writes Alley Oop and handles other chores related to the comic strip, works at a computer in the studio of her home. She created an Alley Oop font for lettering. CORY YOUNG/Tulsa World

A sign says reads Bender Studios inside the home of Jack and Carole Bender, the creators of the comic strip Alley Oop. CORY YOUNG/Tulsa World

Jack Bender and wife Carole took over the Alley Oop comic strip after the retirement of Dave Graue in 2001. Bender previously illustrated the strip while working with Graue. CORY YOUNG/Tulsa World

Jack Bender crafted a respected body of work as a sports cartoonist and political cartoonist before taking the reins of the Alley Oop comic strip. CORY YOUNG/Tulsa World