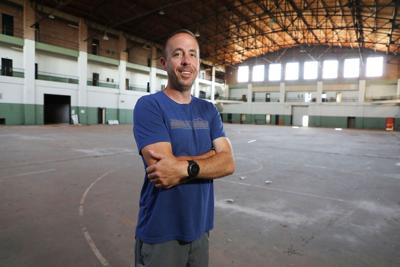 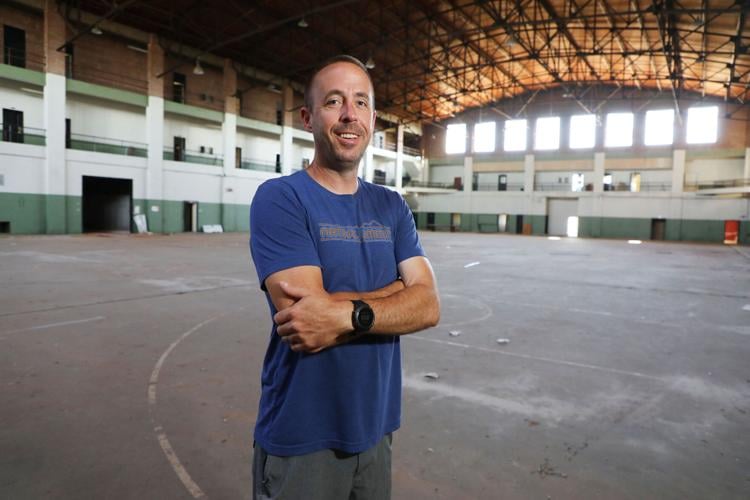 Daniel Mercer, CEO and co-founder of COOP Ale Works, is shown during a tour of the COOP Ale Works’ 23rd Street Armory project in Oklahoma City. 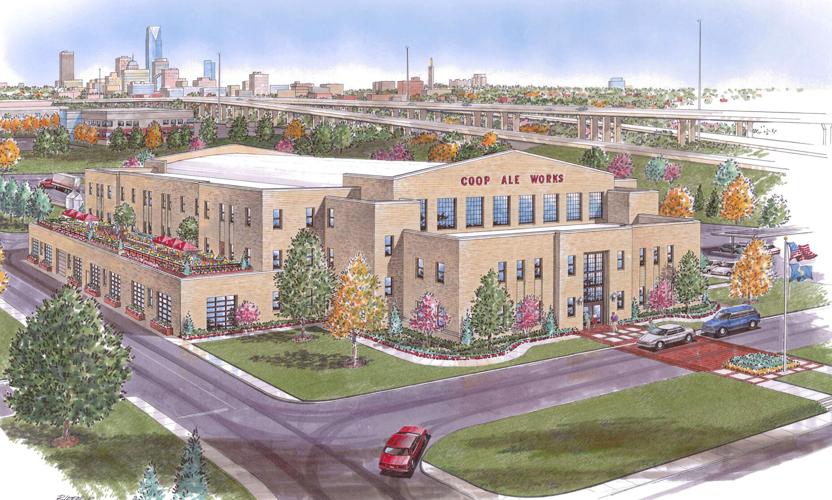 An artist's rendering of the exterior of the COOP Ale Works 23rd Street Armory project in Oklahoma City is shown. 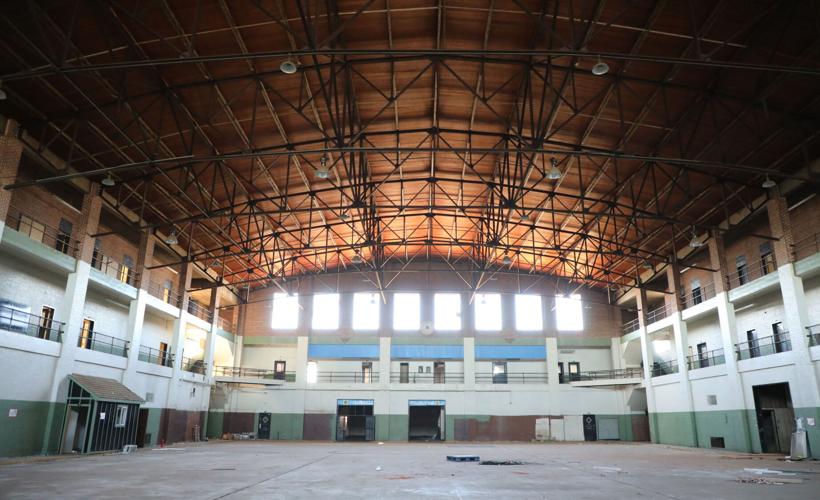 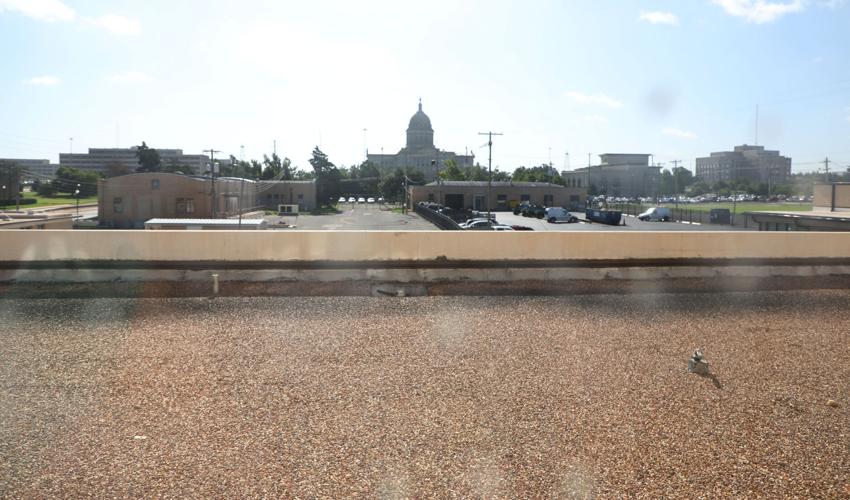 The building has a view of the Capitol and what will become an outside eating area. 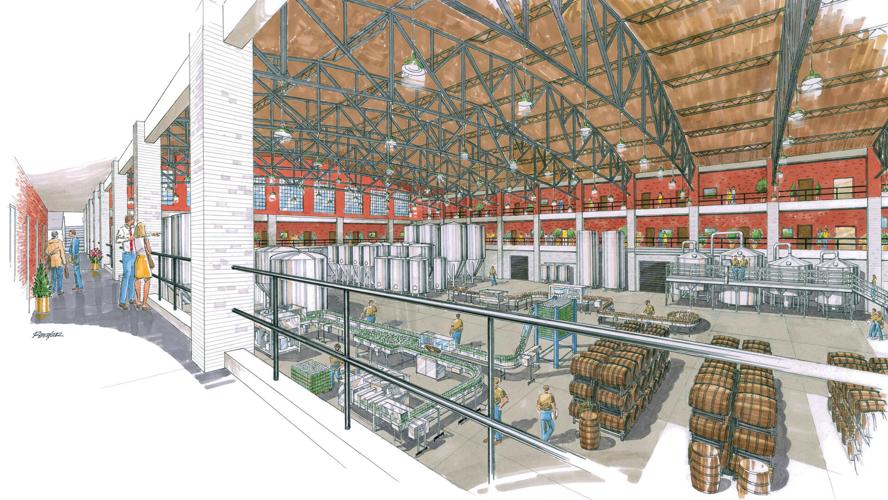 An artist's rendering of the interior is shown. 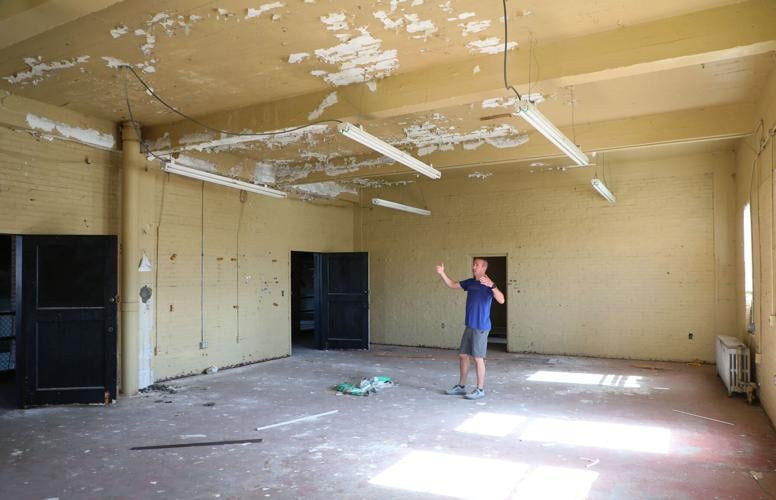 Daniel Mercer describes a future hotel room during a tour. 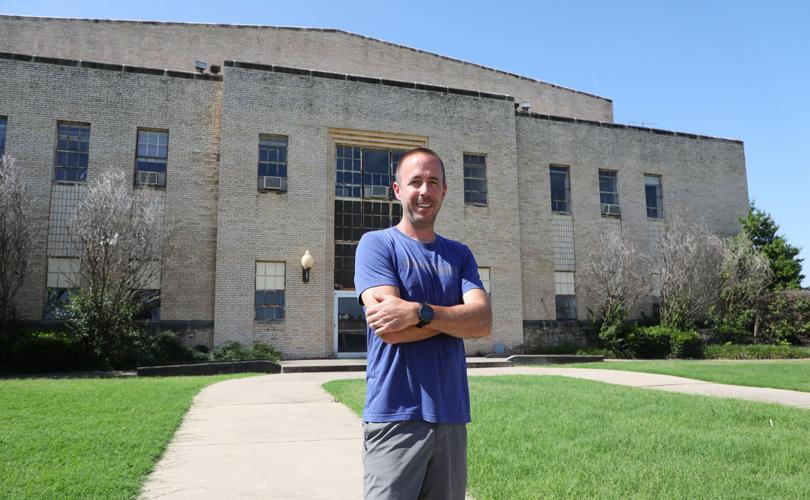 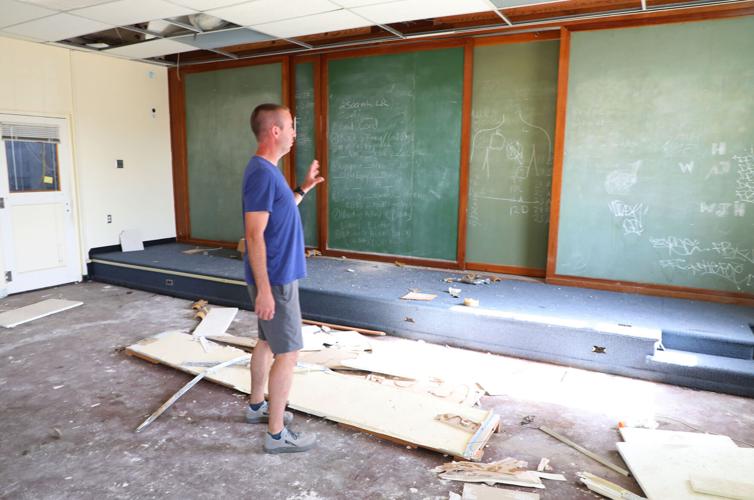 Daniel Mercer looks over some chalkboards during a tour of the COOP Ale Works 23rd Street Armory project. COOP has been working on this project for the past five years. 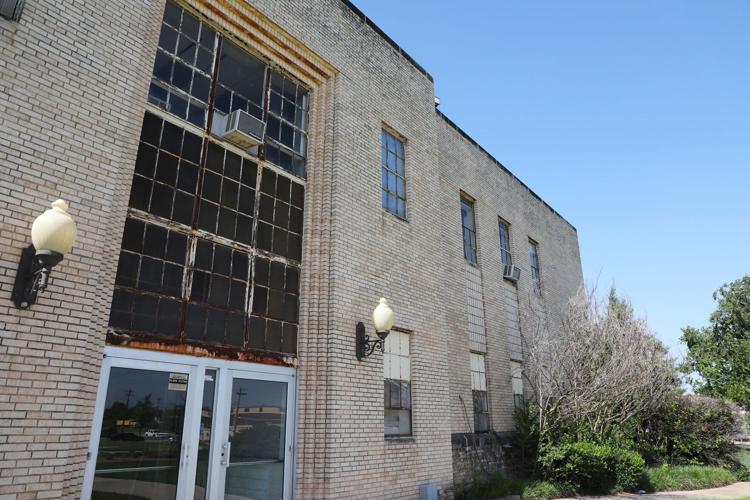 The exterior of the COOP Ale Works 23rd Street Armory project in Oklahoma City is shown. 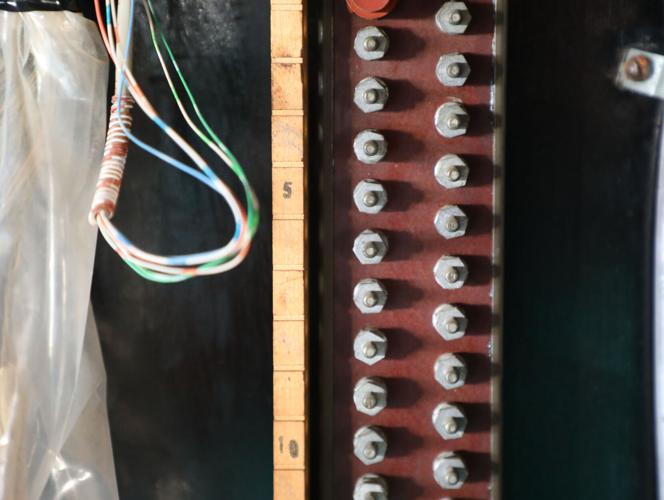 An old phone box is shown up close at the 23rd Street Armory .

The wheels are turning faster for COOP Ale Works and its 23rd Street National Guard Armory project in Oklahoma City. The $55 million project is closer to getting started after a few years of delays.

The project will consolidate COOP’s business and brewing operations in the new location, and it will add a hotel, restaurant, villas and event space.

This project started in 2018 but had some delays. The process of putting a project like this together is quite involved. Part of the long delay included the COVID-19 pandemic and ownership of some of the easements.

The 23rd Street Armory, constructed in 1938, was designed by architect and Oklahoma Army National Guard Maj. Bryan Nolen and was built as part of the Depression-era Works Progress Administration. At the time of its construction, it was promoted as the only armory in Oklahoma funded entirely by state funds generated from oil wells on the Oklahoma State Capitol grounds.

COOP co-founder Daniel Mercer drove past the historic armory on his way to work at COOP’s current brewery and taproom at 4745 Council Heights Road in Oklahoma City and saw a building with potential.

“I happened to live nearby; it is about a three-minute drive and on my way to work for about four years. I drove by this building and really kept looking at these giant bay windows from the street and started thinking about the vertical space inside. Then in early 2017, I decided to make a call to the state to see what they were going to do with the building. And that’s when they told us that they were going to set it up for an RFP (request for proposal) that following September,” Mercer said.

“Brewing obviously takes some critical infrastructure, and that’s always been key to us relocating and finding a home close to the city’s core. And it just so happened that we have this big, huge atrium that’s 22,000 square feet. The entire building is 89,000. (With the final issuance of the RFP), it allowed us to get in and come in here, sonar the walls and the floors and the columns and the beams to try to get some insight into how solidly built the building was and where the rebar was, things like that, and drilling holes in the floor and really getting a feel for what we were going to have to do,” Mercer said.

COOP initially just wanted the main building, but the idea expanded to additional hotel rooms, a pool club and a beer garden if there was space and the state had that space to sell.

“In April of 2018, the state awarded the winning bid to us. And then that started a cascade of other events. Here we are, about four and a half years after that. It has been a long journey. This is a very big building. We started just thinking about this building and then, over the past few years, started to expand the envelope of what we really wanted to create here as a destination hotel, and that involved adding some additional rooms, adding things like a pool club and a beer garden, and that necessitated additional land that the state really didn’t have any use for. So we end up here today with eight and a half acres of land and six buildings. We will be demolishing four of them,” Mercer said.

“We’ll be using those gaps for parking to support the ancillary properties around the primaries, being obviously the armory here, and then what we call the Villas Building, and the old Veteran’s Affairs administration building. There, we’ll have 12 hotel villas and a speakeasy in the basement and a kitchen,” he said.

Inside the armory, on the second and third floors, will be 14 hotel rooms. There also will be a 4,000-square-foot restaurant with a 3,700-square-foot shaded patio that overlooks the Capitol where, when complete, lawmakers can come after a day’s work and ponder their successes or failures.

“We’ve got room in the restaurant for seating for about 60 to 70, and then the patio could support a crowd of about 180. The showcase for the building for me, at least, has been the development of the taproom and what we were going to do with it. So obviously, in this giant atrium, we’ll be using the space for tanks and the brewhouse, both the pilot brewhouse, and then the production brewhouse, as well as all of the support systems,” he said.

One thing that COOP will do is get a brand new brewhouse for the facility. Moving its current system would be costly, and the downtime would be extreme. Its new 60-barrel BrauKon Brewhouse will be a showcase system from Germany.

“At the far north end of this atrium, we have a 4,000-square-foot taproom that is really a glass and steel box. The purpose was to make it look different, you know, make it not look like this interior brick monolith. And that was partially driven by the National Park Service and the State Historic Preservation Office in the pursuit of historic preservation tax credits, which make this deal feasible. But it was really to build something that was just kind of disconnected but integrated, but also provided a lot of visibility into the operational space and into the ceiling and the wooden deck and the trusses. That’s gonna be a really immersive experience for the heart of this entire development, which is COOP Ale Works and the brewery,” Mercer said.

COOP is five years into this project. It has been planning with consultants for the guest experience and working with architecture and engineering firms. Including the rebidding, financial process and construction, COOP hopes to be done in early 2025.

When COOP opens its doors, its new next-door neighbor will be the ABLE (Alcoholic Beverage Laws Enforcement) Commission. It is just a hop, skip and jump to the front door.

Another unique thing happened at this building in the early 2000s, when workers uncovered three artillery rounds. The rounds were underneath a metal plate sitting in a bed of dirt. The rounds were for training and practice but were still live. COOP hopes to get the rounds after they are decommissioned and use them somewhere on the property.

The state was using the facility to store furniture and other items. COOP plans on honoring the history of the 45th Infantry Division of the National Guard.

“We’ve got a really good relationship with the Oklahoma Historical Society. And I think the outpouring of support to really bring in additional history into this building, it is an opportunity to honor the heritage of that division and their deployments in World War II and the Korean War, which were the most luminous ones.”

Canebrake resort and restaurant back in business

The resort, spread over 64 acres near Lake Fort Gibson a couple of miles southeast of Wagoner, is now taking reservations for everything from yoga classes and spa treatments to meals in its restaurant, which is now overseen by executive chef Bryan Sadler.

What the Ale: Wild Brew fundraiser for bird conservation set for Aug. 27

There will be hundreds of craft beers to sample and tons of food. Dead Armadillo brewed a tangerine IPA for the event.

It's all in 'la familia' at Tacos los Hermanos

Jose Munoz Jr. said most of the recipes used are ones his mother, Yolanda, developed over years of making sure her family was properly fed.

Two popular Broken Arrow restaurants that were cornerstones of the city's downtown Rose District have decamped for a new location — and in one case, a new identity — a few blocks north.

Four stores will feature roastings during the event.

What the Ale: Beer of the Week, Wild Brew Tangerine IPA brewed by Dead Armadillo

This is the fifth Nothing Bundt Cakes to open in Oklahoma, and the second in the Tulsa market, after the shop at 7890 E. 106th Place, which opened in 2014.

Review: Put on the Red Light for some top-notch chicken

The newest concept from the McNellie’s Group is operating in the former downtown El Guapo with an uncomplicated menu built around fried chicken.

El Reno is the epicenter of the Oklahoma onion burger, with local establishments such as Sid’s Diner, Johnnie's Grill and Robert’s Grill serving up the specialty.

Daniel Mercer, CEO and co-founder of COOP Ale Works, is shown during a tour of the COOP Ale Works’ 23rd Street Armory project in Oklahoma City.

An artist's rendering of the exterior of the COOP Ale Works 23rd Street Armory project in Oklahoma City is shown.

The building has a view of the Capitol and what will become an outside eating area.

An artist's rendering of the interior is shown.

Daniel Mercer describes a future hotel room during a tour.

Daniel Mercer looks over some chalkboards during a tour of the COOP Ale Works 23rd Street Armory project. COOP has been working on this project for the past five years.

The exterior of the COOP Ale Works 23rd Street Armory project in Oklahoma City is shown.

An old phone box is shown up close at the 23rd Street Armory .