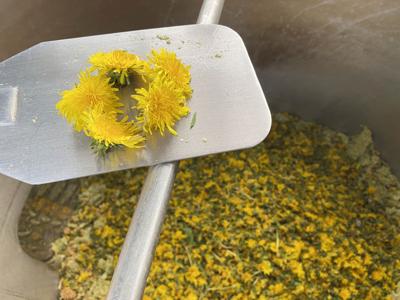 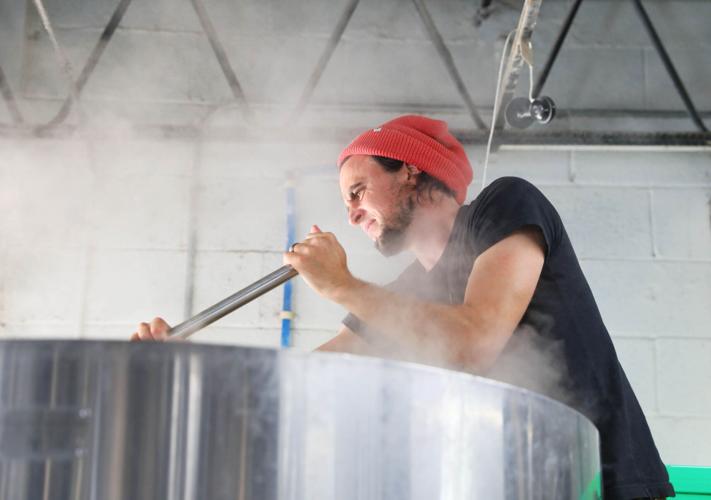 Brewer Josh Graves stirs dandelions and hops as they are steeped in the wort of Heirloom Rustic Ales’ batch of Plague Doctor on April 8 at the brewery, 2113 E. Admiral Blvd. 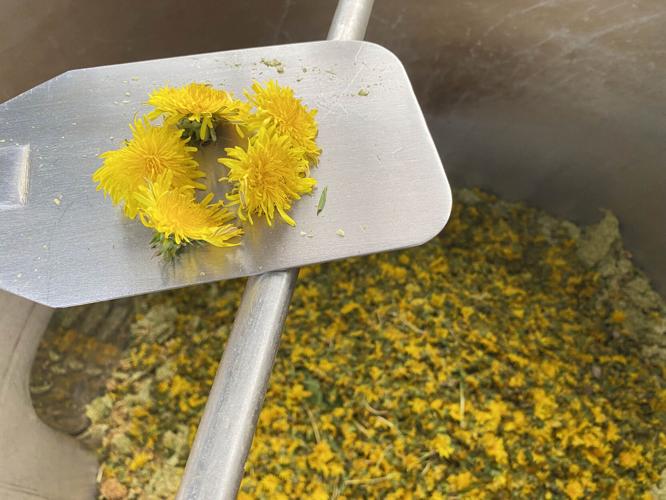 Dandelions and hops are mixed into the wort of Heirloom Rustic Ales' batch of Plague Doctor on April 8. 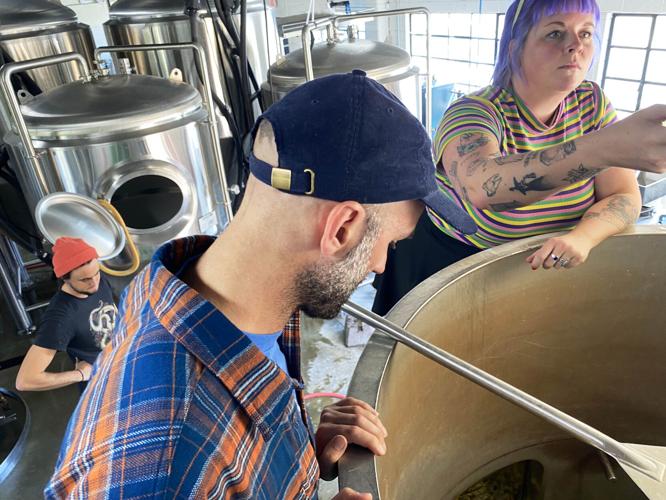 Jake Miller and Jessica Hermann look over the dandelions and hops as a batch of Plague Doctor is made at Heirloom Rustic Ales.

Heirloom Rustic Ales does something special once a year: It brews a beer with dandelion flowers.

Brewing with dandelions isn’t something crazy that brewer and co-owner Jake Miller concocted. This kind of brewing is part of history.

“We do this once a year when the dandelions start popping out in spring,” Miller said. “We try to get around 20 to 25 pounds of dandelion flowers for this beer.”

“I think it’s a super fun beer because it’s rooted in a lot of old European practices before there was a lot of hops,” he said. “They would add flowers, herbs, spices, and all kinds of things to these beers to either get flavor or to combat bacteria growth. So it’s fun to kind of participate in something that’s got a historical narrative like that.”

Miller said he brews beers that he wants to drink, adding that he loves floral profiles and beer.

“This gives us an opportunity to take these beers where we already use floral hops at high doses and to just add the most floral component ever, flowers, to enhance all of that and really drive that profile forward.”

Miller brews this beer, called Plague Doctor, not only to have something that he likes, but to bring the community together.

This time of year, dandelions are everywhere. Miller asked via social media for people to bring in their dandelion flowers.

Nearly 25 pounds of flowers were either picked by Miller or brought in by the community. The dandelions were kept in the freezer to keep the flower flavors fresh on brew day.

Miller discovered in Vermont what he thinks was the first brewery in the United States doing this style.

“The first American version of this that I saw was Hill Farmstead Brewery in Vermont. It was this communal event where everybody shows up to the Hill Farmstead grounds, and they just walk and pick dandelions and they have garbage bag after garbage bag full of them. I was like, that’s a really cool way to get community buy-in to a beer and the process.

“Everybody’s so excited to show up and drink it because you had a hand in it. ... And there’s something about beers and spring, I think are incredibly special. It’s something that really ushers in the change of season. And what better way to do that than with one of the dominating flowers that lets you know that winter relief is here?”

Heirloom brewer Josh Graves and Miller poured the dandelion flowers and whole leaf noble hops (which have a lilac sent) into a tank and steeped it with hot water to capture all the floral flavors.

“We put it in this really simple base beer. It’s only about 3% alcohol, and we use a really neutral yeast on it, too — our lager yeast. The whole idea is to just get everything out of the way and just make a really concentrated floral beer.”

The beer will be ready in four or five weeks and will be naturally carbonated with a second fermentation in the can.

“I really like high carbonation in these beers,” Miller said. “And I really like when lager and Saison kind of come together and marry. One of the ways that we’ve been doing that is putting things like herbs and spices and flowers into lager beers and then carbonating it, too, well beyond the normal rate. And it kind of treads into the Belgian French style with a cleaner yeast profile, which I love,” he said.

Plague Doctor is a single-batch beer available in the taproom and select locations in Tulsa.

“I’ve said in more than a few places that for me, beer is something that I don’t want people to study. I want it to be something that disappears. I want you to meet with your friends, order it and before you know it, you’re trying to drink out of an empty glass because it’s just gone. This beer does that when we do it right,” Miller said.

Looking for restaurant recommendations during the PGA Championship? Here are the Scene staff picks for places to eat

Given the high volume of visitors who will be in Tulsa this week for the PGA Championship, we asked our Scene staff reporters and editors to pick just a few of their favorite places to eat.

Lisa Becklund, a James Beard Award semifinalist for Best Chef Southwest in 2020, had been co-owner of a Sicilian restaurant in Seattle before moving to Oklahoma to open Living Kitchen.

What the Ale: Oklahoma Craft Beer Week has special collaboration from 44 breweries

What the Ale, Beverage of the week, Bob Dylan's Heaven's Door whiskies

The 64-acre facility featured a luxury spa, 16 rooms, a bar and restaurant, a yoga facility, exercise rooms, and meeting space, all of which has been well-maintained, according to a co-owner.

Live music will be part of the event.

The company is also working to refine the Chicken and the Wolf menu, which features fried chicken sandwiches, tenders and wings that can be augmented with sauces and seasonings ranging from extra-mild to extra-hot.

"I like to say that what we offer is something fun," owner Derek Bray said. "We want to give people a quality product, but we like to have fun when we're cooking, and we want our customers to have fun eating what we cook."

Brewer Josh Graves stirs dandelions and hops as they are steeped in the wort of Heirloom Rustic Ales’ batch of Plague Doctor on April 8 at the brewery, 2113 E. Admiral Blvd.

Dandelions and hops are mixed into the wort of Heirloom Rustic Ales' batch of Plague Doctor on April 8.

Jake Miller and Jessica Hermann look over the dandelions and hops as a batch of Plague Doctor is made at Heirloom Rustic Ales.