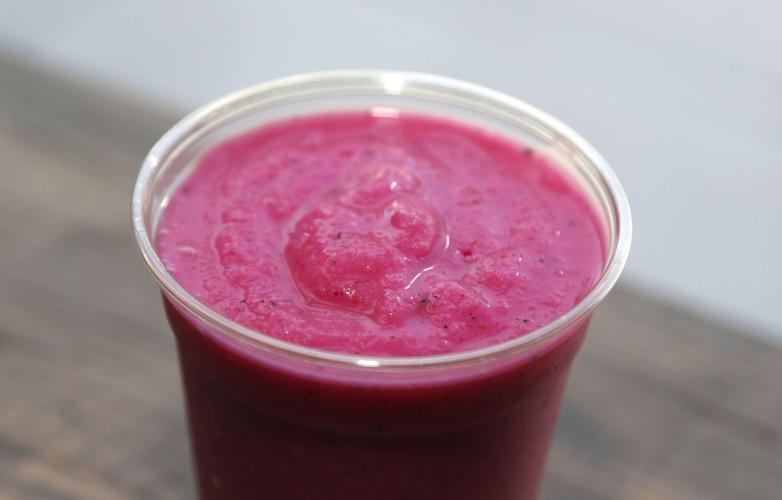 The Pink Dragon smoothie is a vegan creation made with dragon fruit, pineapple, mango, peach, strawberry, unsweetened coconut and agave. 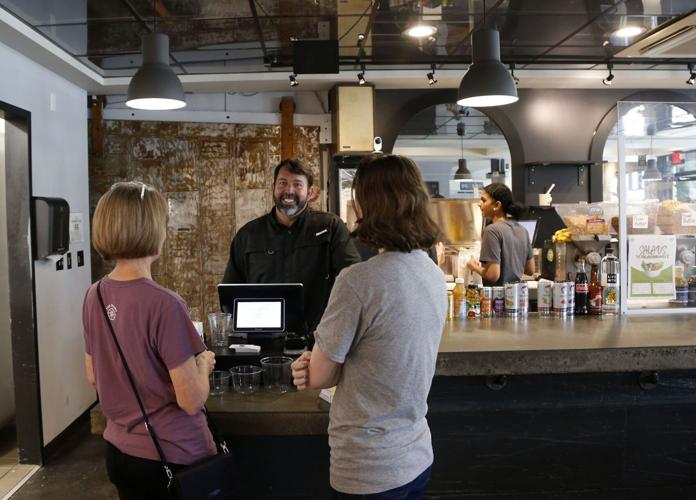 Jason McGill takes orders at the new Ah-Sigh-E in Tulsa's Studio Row neighborhood. "Before I started this business," McGill said, "I had never even worked behind a cash register before." 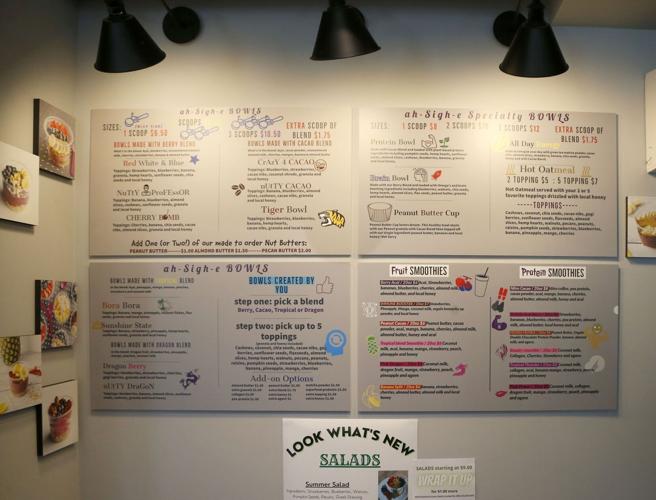 The menu at Ah-Sigh-E lists all the ingredients in each item. "We think it's important for people to know exactly what they are getting," owner Jason McGill said. 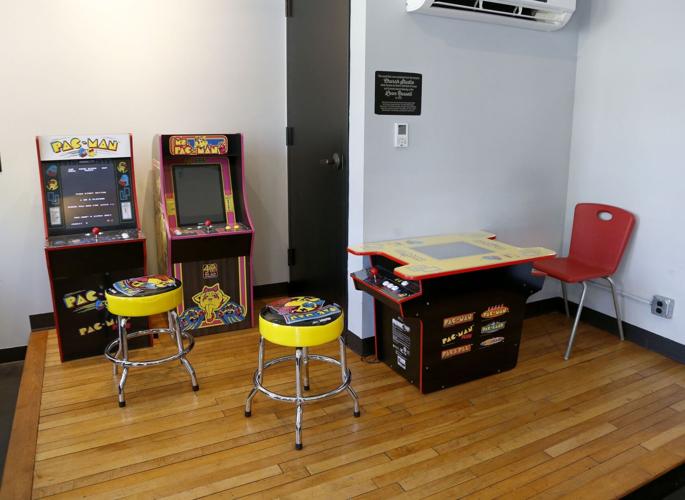 One of the things Jason McGill learned to love during the 15 years he lived and worked in Florida was the mom-and-pop shops that sold smoothies and bowls built around the Amazonian “superfood” açaí.

But then McGill’s wife had the chance to take on what he called “her dream job” with a Tulsa company, and the family relocated to Oklahoma.

“We found out pretty quickly that there weren’t any places here that made the sort of açaí bowls and smoothies that we liked,” he said. “So I started messing around with making them at home.”

McGill’s experiments have resulted in five locations of Ah-Sigh-E, which specializes in açaí bowls filled with fresh fruit, homemade granola, local honey and similar ingredients — and which uses the phonetic spelling of that signature ingredient as its name.

McGill opened the first Ah-Sigh-E in Bixby in 2018.

“We were in a tiny space in the middle of a strip shopping center,” he recalled. “About six months later, the business at one end of the center moved out, and the landlord offered us the chance to take that over.

“I was a little worried, because it was a bigger space,” he said. “But we rolled all our equipment down the sidewalk and set up in the new space. The best thing was that it had a drive-through window, which turned out to be a godsend when the pandemic hit.”

Shops in Jenks, Broken Arrow and Owasso soon followed, and McGill’s goal of opening five Ah-Sigh-Es in five years became reality with the Tulsa location in the Studio Row neighborhood, just across the street from the Church Studio, in the space that recently housed Foolish Things High Dive.

In keeping with the neighborhood vibe, most of the decorations are images of Tulsa music legend Leon Russell, along with some of the other rock stars that frequented Russell’s Church Studio in its 1970s heyday.

It is not a large space: A couple of high-top tables for four, and a shelf-like table with bar stools that stretches the width of one of the shop’s windows, are all the seating available, unless you include the stools set before the various Pac-Man machines on what used to be a small stage area.

But, McGill said, a good portion of thebusiness involves takeaway, whether it be the customers themselves stopping in for breakfast on the way to work or coming by to grab something for lunch, or orders sent out via the operatives of the delivery service DoorDash.

“I’d say about 30% of business is handled through DoorDash,” McGill said.

That doesn’t seem to be the case on this particular Friday, as the store is packed with lunchtime customers. McGill said this was a “customer appreciation” day, and patrons were taking advantage of a special promotion.

Ah-Sigh-E offers 15 smoothie bowls, as well as a “build your own” option, and 10 smoothie drinks. The bowls typically use one of four açaí blends as the base, and the menu lists all the ingredients that go into every item Ah-Sigh-E makes.

“We think it’s important for people to know exactly what they are getting when they order something,” McGill said. McGill said it also makes it easier for customers to substitute certain ingredients to make an item in line with vegan diets (swapping the local raw honey with agave syrup, for example).

The Tulsa location is also the only Ah-Sigh-E to have a coffee service, as well. McGill said the spot had once been a coffee shop, and as the equipment was still in place, it made sense to take advantage of it.

All these items were swirled together into a concoction with predominant flavors of chocolate and banana — which is not at all a bad thing — and a pleasantly velvety texture that could easily make one forget that this was not some decadent indulgence.

Smoothie bowls — which are something of a misnomer, as the bulk of the ingredients come whole and layered in other attractive and colorful patterns — are the best sellers, according to McGill, with the Red, White and Blue, named for its toppings of strawberries, blueberries and sliced bananas, being the most popular.

Depending on the type and amount of the açaí blend used, bowls range from $6.50 to $8 for a small serving to $10.50 to $12 for a large. The açaí blends available are Berry, Cacao, Tropical and Dragon, named for its use of dragon fruit.

“By itself, açaí has a pretty flat taste,” McGill said. “You can eat it on its own, but it’s not something would appeal to everyone. With the blend, we’re able to get all the nutritional value from açaí and give flavors that appeal to more people.”

Both bowls had an enjoyable variety of flavors and textures, although the fresh-made peanut butter in the Brain Bowl benefited greatly from being worked into the mix, rather than sitting on the top. The tropical fruits in the Nutty Dragon blend added a nicely astringent tang to the whole. And while I can’t say I felt any smarter after finishing the Brain Bowl, I can attest to the fact that I definitely wasn’t hungry anymore.

“The bowls are really pretty filling,” McGill said. “A lot of people like to add extra nut butter, all of which are made in house, to give things a little extra protein.

“But I really don’t like to market what we have as ‘health food,’ or ‘fast food,” he said. “We want to give people something that they enjoy, and the fact that we can make and serve it quickly, and that it’s good for you, is just a bonus.”

Roll out the Barrel: Newest Apple Barrel Cafe offers comfort on a platter

Most entrees are served not on plates, but platters, which come to the table crowded with generous portions of all-American comfort foods.

A not-so-moveable feast: The Hemingway brings new twists to the steakhouse

The reason for naming the restaurant The Hemingway was because "he was a great American storyteller, and we are wanting to tell stories through our food."

One of the main attractions of the festival is the food, which is prepared by volunteers from recipes that in some cases have been handed down for generations.

Chefs with ties to Tulsa to appear in 'Chefs vs. Wild'

It's the second location of this Tulsa-based restaurant to close in a little more than a year.

New foods to try at the Tulsa State Fair

While the rides and the concerts and the livestock shows are perennially popular attractions to the Tulsa State Fair — remember, this is the e…

Do the Twist: New shop brings flavors of India to pizza

About two months ago, Dhillon and Patel opened Pizza Twist, the first Oklahoma location for a chain that currently has locations in 17 states, as well as Canada and Indonesia.

The restaurant is the latest concept by the Justin Thompson Restaurant Group, and was conceived, in part, to bring to the Tulsa dining landscape something completely new and different.

Simu Liu reveals he is 'going through a breakup'

Maisie Williams opens up about 'traumatic relationship' with father

Maisie Williams opens up about 'traumatic relationship' with father 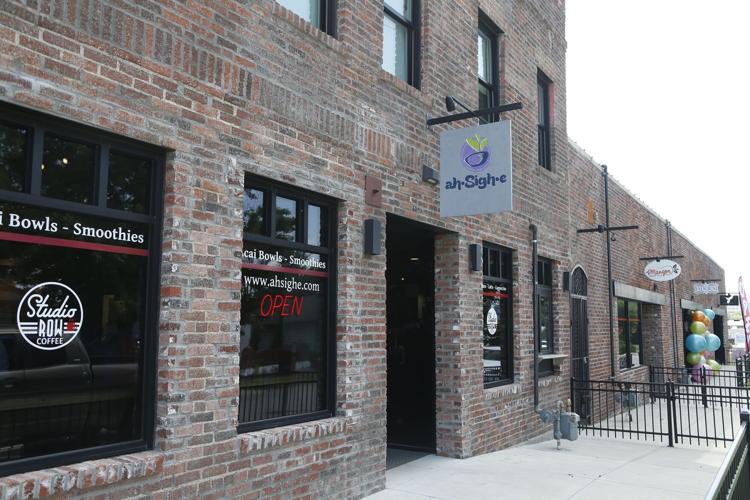 Ah-sigh-e's newest location is located across from the Church Studio in the space once occupied by Foolish Things High Dive.

The Pink Dragon smoothie is a vegan creation made with dragon fruit, pineapple, mango, peach, strawberry, unsweetened coconut and agave. 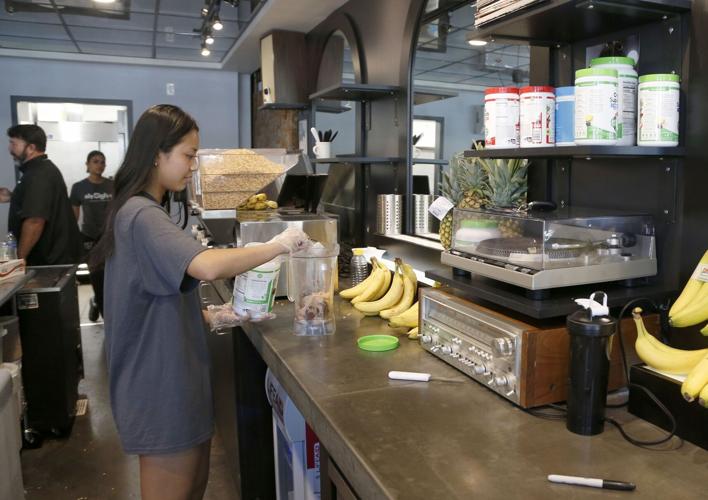 Jason McGill takes orders at the new Ah-Sigh-E in Tulsa's Studio Row neighborhood. "Before I started this business," McGill said, "I had never even worked behind a cash register before."

The menu at Ah-Sigh-E lists all the ingredients in each item. "We think it's important for people to know exactly what they are getting," owner Jason McGill said.