Brother and sister Joshua and Shannon Ozaras, who own The Chalkboard restaurant, recently announced they are handing over ownership to Coury Hospitality. 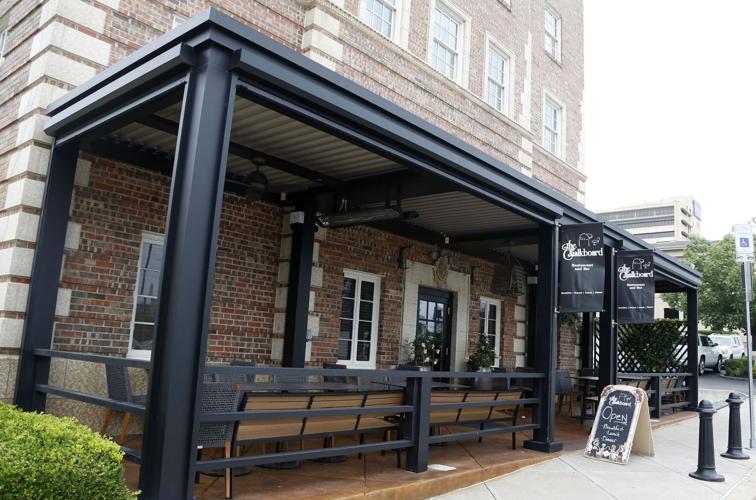 The owners of fine dining establishment The Chalkboard restaurant say they are moving on.

Since taking over Tulsa’s iconic The Chalkboard restaurant a little more than a decade ago, Josh Ozaras and Shannon Ozaras-Garner have been more than just the owners of this fine dining establishment.

They also are usually the first people one sees upon entering the restaurant, located on the first floor of the Ambassador, Tulsa’s original boutique hotel.

“From the beginning, when we were working for our father, we were very hands-on as owners,” Ozaras-Garner said. “We could never be the type of owner who just turns everything over to someone else to run.”

However, come June 30, the brother and sister team will leave the Chalkboard as owners for the last time. They decided earlier this year not to renew their lease with Coury Hospitality, the Dallas-based company that operates the Ambassador Hotel.

“Our decision has nothing to do with our relationship with the hotel, or even with the restaurant business,” Ozaras said. “It’s just that Shannon and I have been in this business together for a good 20 years, and we both decided it was time to carve new paths for ourselves.”

“When we started, neither of us had children,” Ozaras-Garner added. “Now we both have families, and no matter how much we love this business, it does take us away from our families a lot. So that was the real driving force for me — just to be able to spend more time with my family.”

Coury Hospitality will take over the operations of The Chalkboard and plans to retain as much of the current team, including executive chef Daniel Gibb, as possible. In a statement, the company said it plans to do upgrades to the restaurant’s design and menu.

When Tulsa native Paul Coury bought the then-derelict building in the late 1990s with plans to turn it into an upscale hotel, he approached Phillips about resurrecting The Chalkboard for the building.

Phillips would soon sell The Chalkboard to a group that included Ayhan Ozaras, Josh and Shannon’s father. The family would also be involved in other restaurants, including the Garlic Rose and the Green Onion, but The Chalkboard remained the family’s mainstay.

When their father was thinking about selling The Chalkboard in 2011, the siblings decided to buy the restaurant and take over running it themselves.

Throughout its history, The Chalkboard has remained one of the city’s most acclaimed restaurants. The Tulsa World last reviewed The Chalkboard in 2017, giving it five stars.

The restaurant was also among the first in the city to add an outdoor dining area during the COVID-19 pandemic to accommodate diners not yet comfortable with eating indoors.

“I know that some people will say, ‘Oh, COVID pushed you out of the business,’” Ozaras said. “In fact, we actually were thriving during COVID. So we’re able to hand over a successful restaurant to the new owners.”

Ozaras said he and his sister went to Dallas to tell Coury in person about their plans.

“I know it came as a surprise to him,” he said. “But we have a lot of respect for Paul, and we felt this was something that wouldn’t be right to do by Zoom or just with a phone call.”

In a statement, Coury said: “I have enjoyed the partnership with Josh, Shannon and their family over the past two decades. We’re looking forward to continuing the legacy of The Chalkboard and to serve locals and hotel guests alike.”

While the siblings agree they are at peace with their decision, and are confident that the restaurant that has been a part of their family’s legacy for two decades is in good hands, they said they are going to miss their regular customers — both locals and travelers who regularly stay at the Ambassador Hotel.

“We have really become close with a lot of our customers,” Ozaras-Garner said. “Some of them have even attended our weddings — and that includes people who are regular hotel guests. Getting to see them regularly is something I know we both will miss.”

The effort to bring the "real taste of Louisiana to Tulsa" includes importing most of its ingredients — from the fish and shellfish to the bread for the po' boy sandwiches — from the Pelican State.

The restaurant will open this week in downtown Tulsa at 332 E. First St.

What the Ale: Take a tour of COOP Ale Works' $55M armory project

What the Ale, Beers of the Week: COOP Ale Works release new lagers for the summer

Society Burger opened a new location Tuesday in the Tiger Hill shopping center in Broken Arrow, and 1907 Barbecue is planning a cantina concept in Bixby.

The front page of Discover Oklahoma’s 2022 Dining Guide spotlights a group of women enjoying MAD Eats’ one-of-a-kind milkshakes and bloody marys, and lists the restaurant among more than 300 of the state’s “most incredible” dining destinations.

What the Ale, Beer of the Week: NEFF Brewing's Raspberry Pride is 'a perfect summer quencher'

NEFF Brewing's Raspberry Pride is a kettle sour that gluten-free beer-lovers can enjoy.

Il Seme, which is Italian for "seed," is the third concept Lisa Becklund and Linda Ford have created.

"We'll be open as long as the merchandise lasts," Jeff Darby said, "but we're definitely going to close by Aug. 13."

Maya Hawke: I 'wouldn't exist' if my mom Uma Thurman didn't get an abortion

Brother and sister Joshua and Shannon Ozaras, who own The Chalkboard restaurant, recently announced they are handing over ownership to Coury Hospitality.

The owners of fine dining establishment The Chalkboard restaurant say they are moving on.