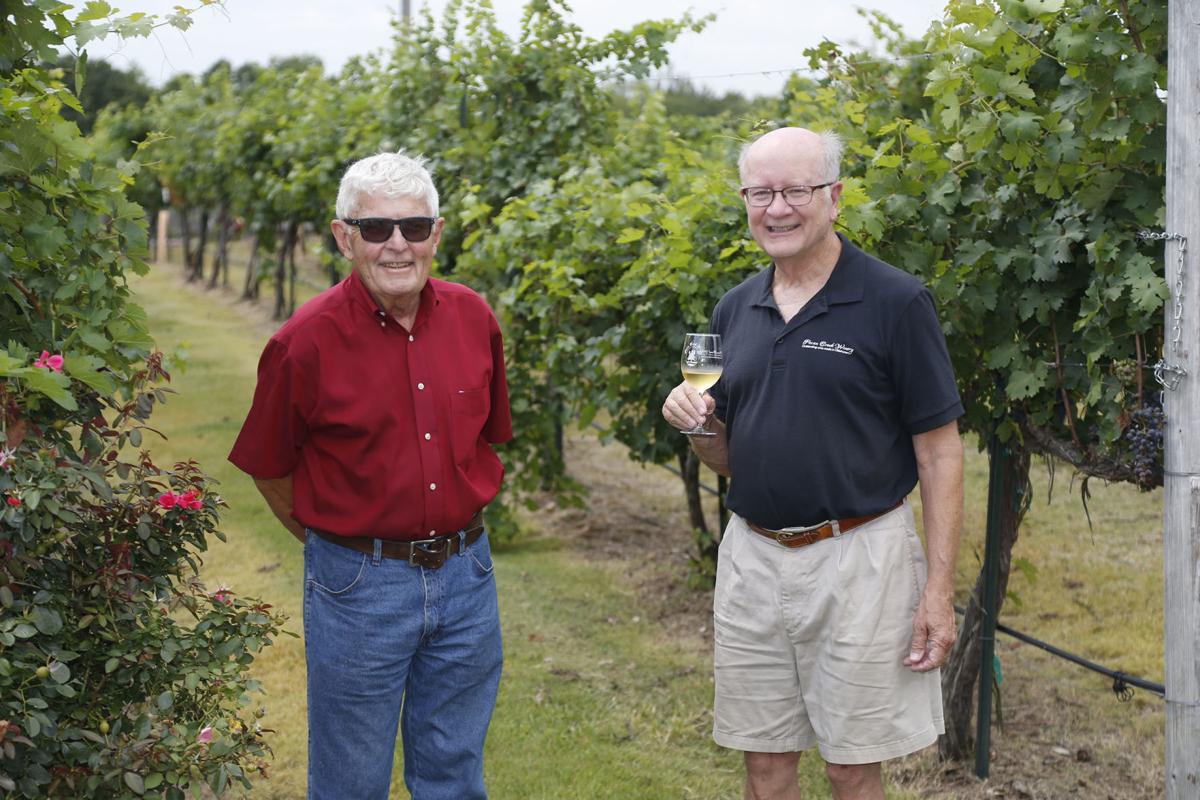 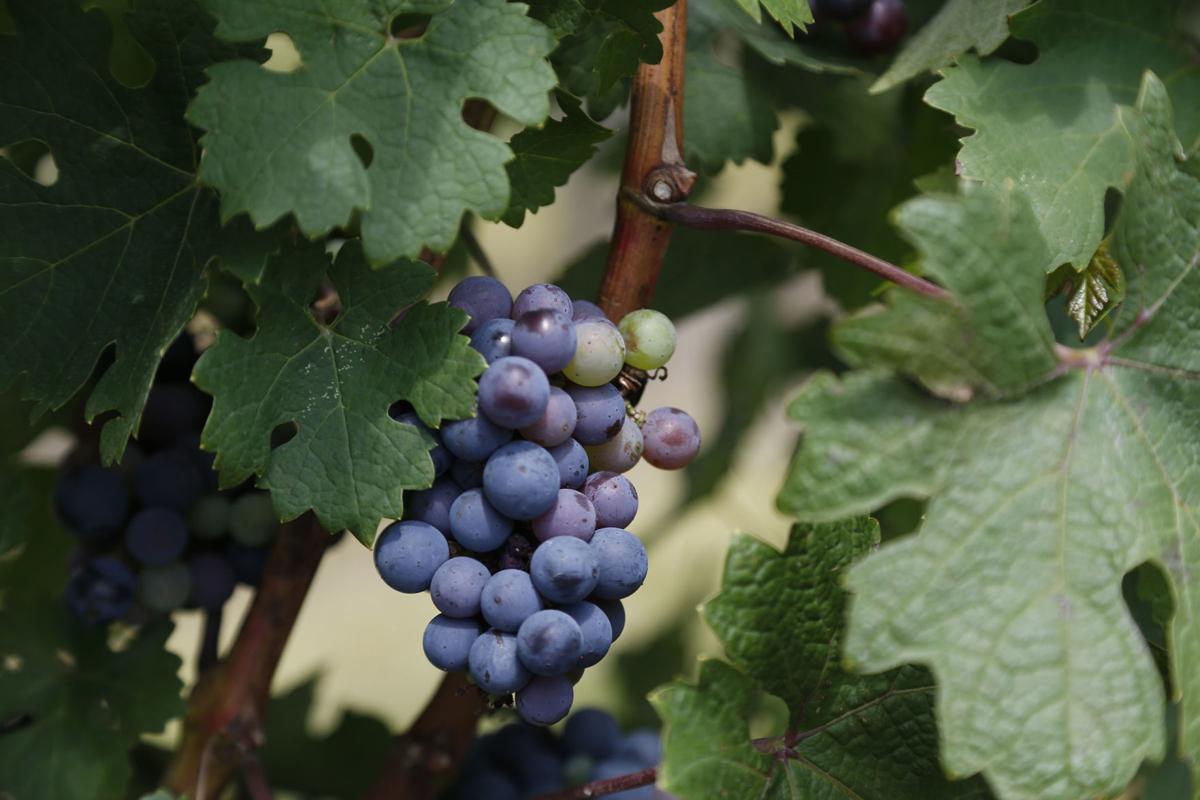 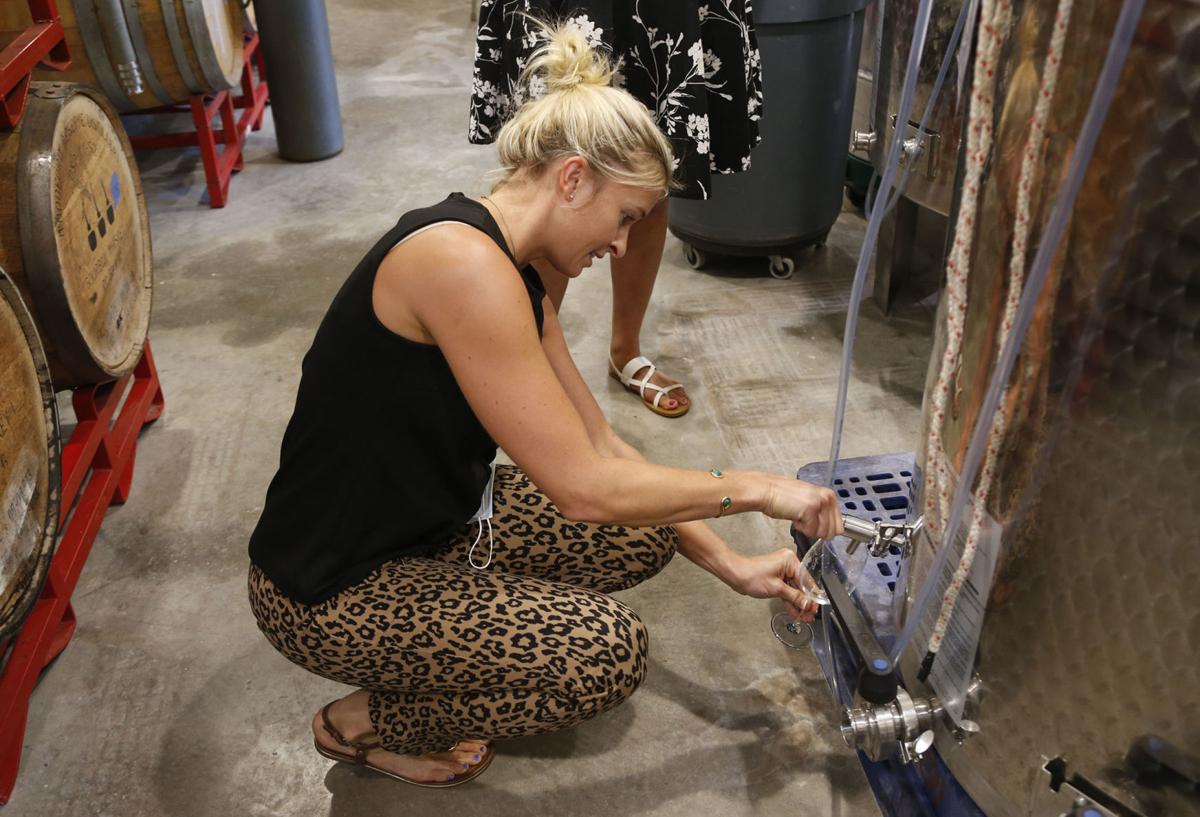 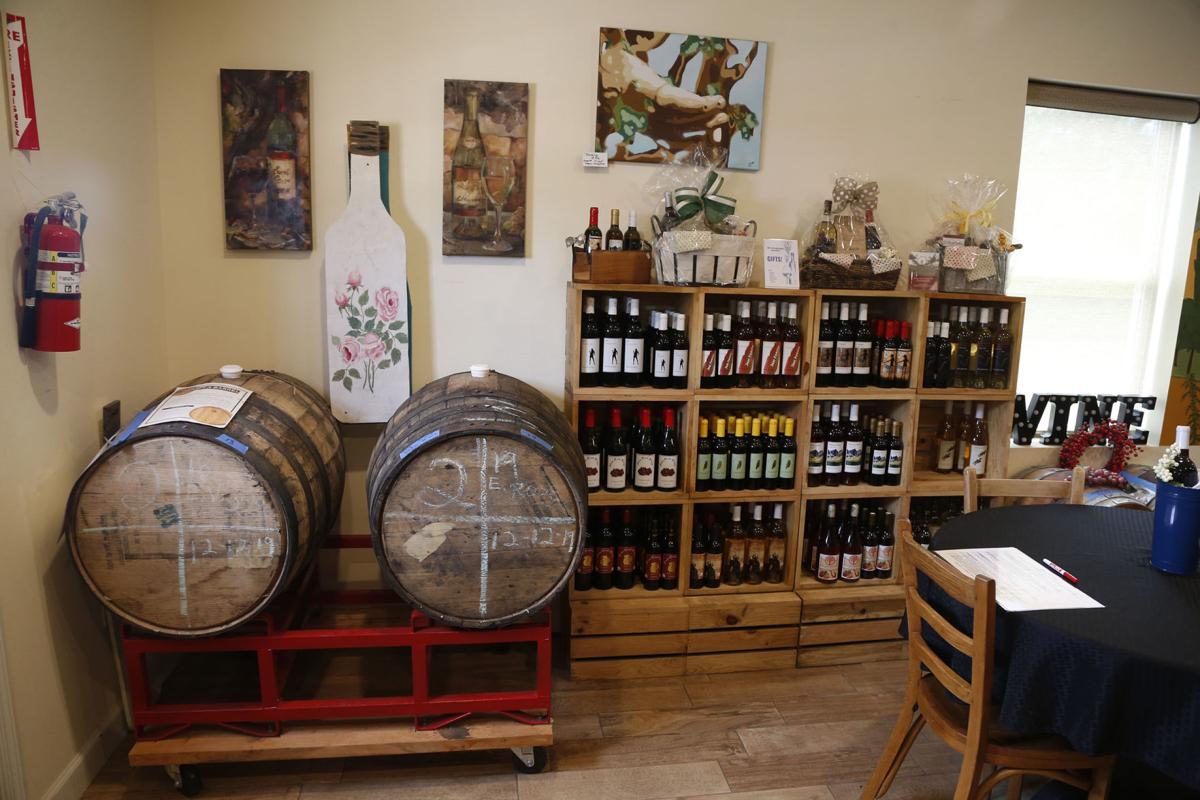 Wines are displayed in the tasting room at Pecan Creek Winery in Muskogee. STEPHEN PINGRY/Tulsa World 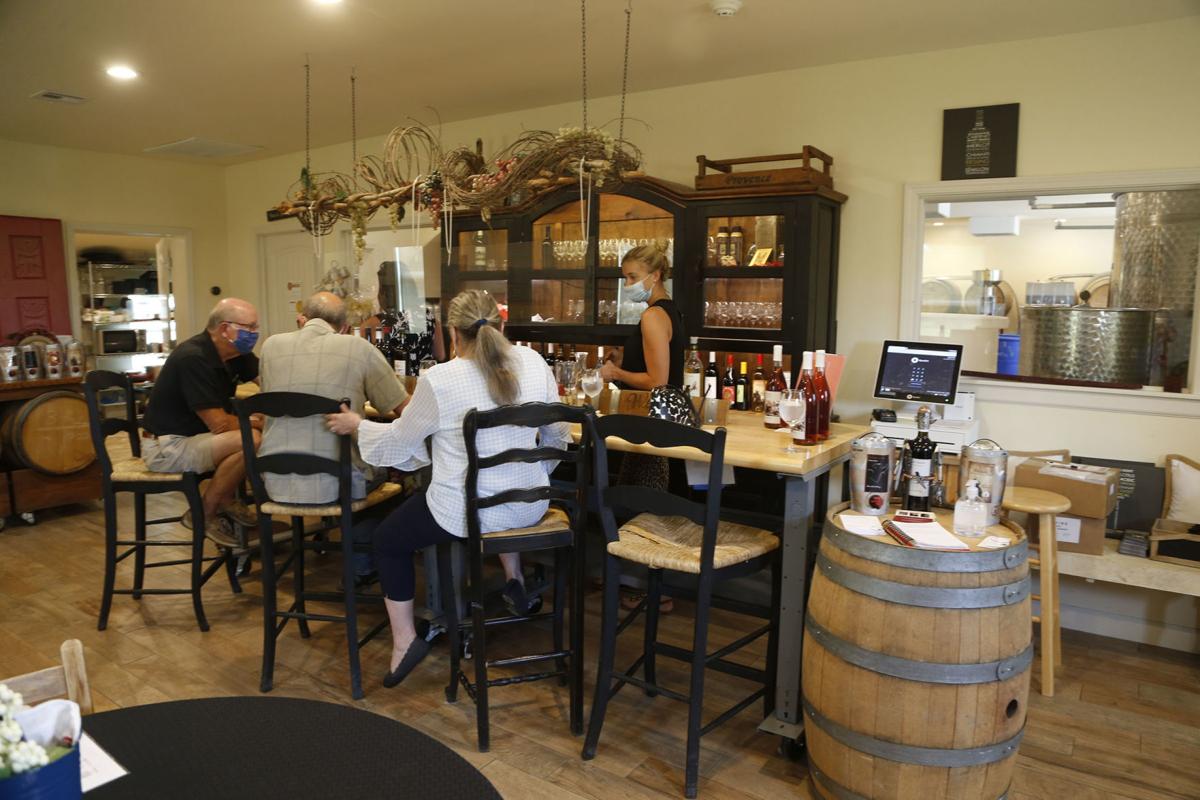 Visitors chat with the Rev. Bob Wickizer (left) and his daughter Laura in the tasting room at Pecan Creek Winery. STEPHEN PINGRY/Tulsa World 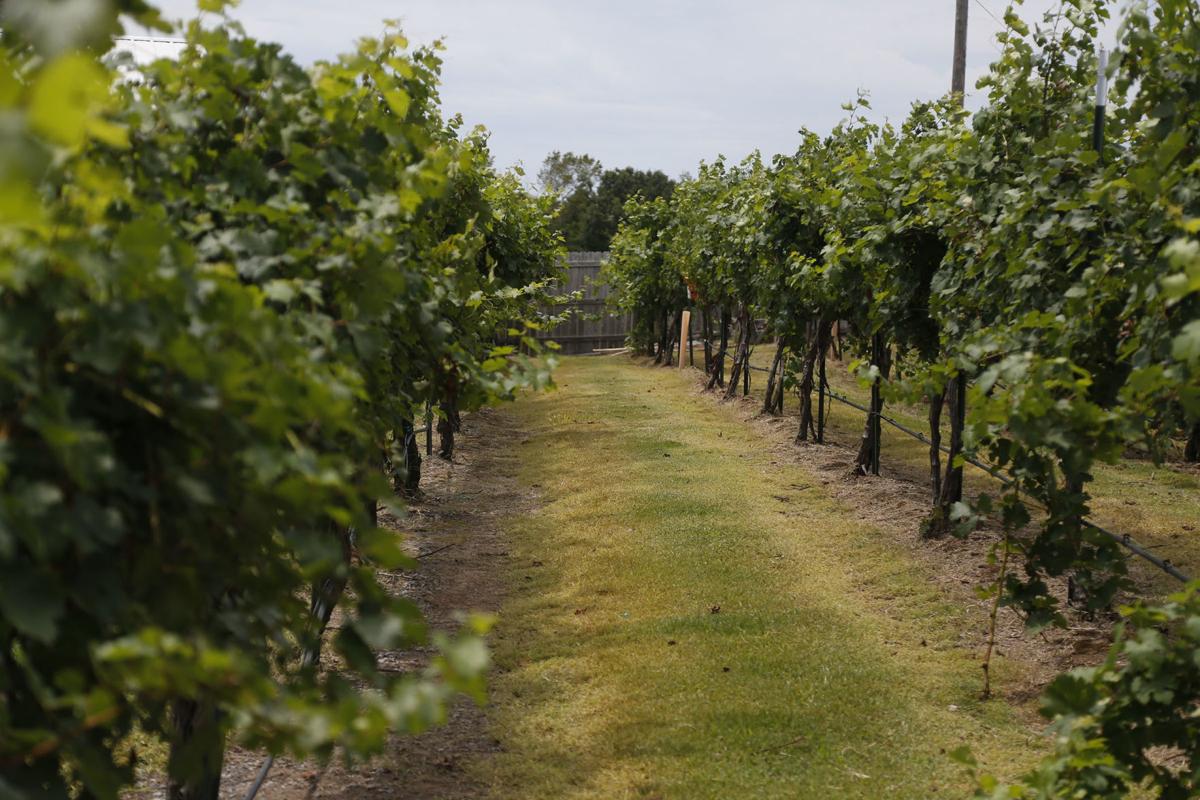 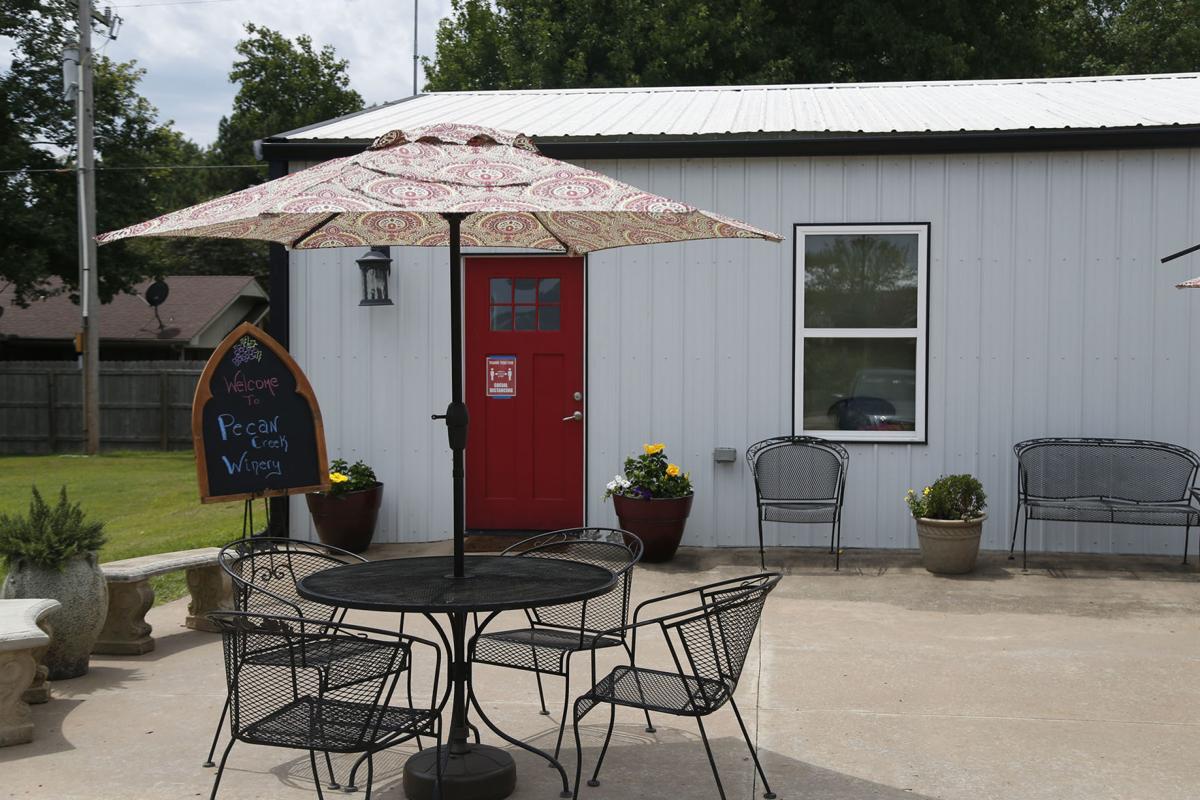 Visitors can relax on the patio area outside Pecan Creek Winery in Muskogee. STEPHEN PINGRY/Tulsa World

Over the course of a life probably few can match, Bob Wickizer has been a musician, physicist, outdoorsman, husband, father, entrepreneur and priest. The latest addition to his shingle is winemaker.

He still is all of those things and recently celebrated a decade as rector at Grace Episcopal Church in Muskogee.

This article started out to be a feature on Pecan Creek Winery, of which we had heard good things. It had been winning medals over its brief five-year history of producing wines and has had success growing vitis vinifera grapes, the grapes used to make the most common and well-known wines around the world but historically difficult to grow in Oklahoma.

Then we met Wickizer, who owns and operates Pecan Creek Winery in Muskogee with Dr. D.I. Wilkinson, a recently retired pediatrician and now full-time farmer, and the story took a whole different path. Let’s start with Wickizer’s teen years.

Wickizer played trumpet in the school band and later drums and trumpet for a rock ‘n’ roll band, Pure Sunshine (a pointed reference to LSD in the late 1960s), in the Springfield, Missouri, area.

“My mother auditioned for the Metropolitan Opera in New York City, then World War II hit and closed that option,” Wickizer. “My father came back from the war and they had kids and that was that. But she was a great entertainer. She could sit at a piano with a glass of scotch and entertain for hours.

“I got into the rock ‘n’ roll scene as a teenager and drove my parents insane. I went off to college and two other guys in the band left and formed Ozark Mountain Daredevils. I was in school and they were touring and recording and going to Europe.”

Enlarged photos of his band days occupy one wall at the winery. Wickizer said he still performs with a group that specializes in pre-1800s music.

Wickizer was a high school dropout.

“I maxed out the standardized test and went to college,” he said.

He studied briefly at Drury College (now Drury University), then earned his bachelor’s degree at University of Missouri-Rolla. He completed his master’s degree and started doctoral work in physics at Washington University in St. Louis at age 23.

“I had an uncle who worked on the Manhattan Project, and he was my mentor, my inspiration to go into physics,” Wickizer said. “I had my dissertation half written and told my advisor that having a Ph.D. was not my calling. I had a history then of going to the edge of something, then moving on to something else.”

He embarked on a career as a physicist and helped design medical CT scanners during their infancy in the 1970s. In his late 20s and early 30s, he started two software companies in medical imaging and sold them to publicly held companies in Silicon Valley. He also taught at the University of Missouri School of Medicine.

In the late 1980s, Wickizer said he was working for a company that assigned him to consult with Samsung about factory automation.

“They showed me what they were doing, and it was absolutely Stone Age,” he said. “Our negotiations were very polite, and I ultimately made a $25 million sale for my company. I had apartments in Tokyo and Seoul and had a zip code in San Francisco, and there was a lot of traveling.

“Then my father died in 1991. He was a civil engineer and once I had to help him relocate a Mennonite village in Missouri in an area that was going to be flooded for a lake. I ended up helping milk cows and collecting eggs and doing other things in the village.

“The villagers showed up for my dad’s funeral, and one old gentleman said, ‘Your father is the only person in your world I know who understands our way of life.’

“It was all of that together, the job, my father’s passing, that drew me to become an ordained Episcopal minister.”

Wickizer entered seminary in 1995, was ordained in California, then moved to the East Coast where he was rector of St. Philip’s in Laurel, Maryland. He served as interim rector at St. Anne’s in Annapolis and as a chaplain at Washington National Cathedral once a month for six years.

“I got to swim at the Naval Academy, and that was cool, literally,” he said. “The pool was very, very cold.”

In 2009, he preached a number of Sunday services at the National Cathedral, which led to his relationship with Wilkinson.

“I was on the search committee for Grace Episcopal and went to see Bob when he was at the National Cathedral,” Wilkinson said. “I brought him down here, and he was such a great priest I was afraid someone else might take him away from us.

“I knew he liked to make wine at home, so I said, ‘Would you like to grow grapes and make some wine together?’ I figured if we planted vines that would last the next 40 years, he wouldn’t want to leave them.”

In March of 2010, Wickizer became rector of Grace Episcopal Church.

Wickizer and Wilkinson started Pecan Creek Winery in 2012. Wilkinson would be the vineyard manager and Wickizer the winemaker.

“I bought this property that had a home, a 5,000-square-foot building and a three-phase electrical power supply (which accommodates higher loads than a common one-phase supply), which was important,” Wickizer said. “I figured we could start a winery here.”

They sold their first wines made of purchased grapes in 2015 and wines from their own vineyards in 2016.

“We make wines from 40 to 50 percent of our own vineyards and the rest from vineyards north of Fayetteville (Arkansas),” Wickizer. “We’ve never brought in that swill concentrate from California.”

Wilkinson said they originally had two grapes in mind to grow until they conferred with a college professor who was an expert in the field and today holds a prominent position with E.J. Gallo.

“He said to start with the hybrids chambourcin and vignoles, which was good advice,” Wilkinson said.

Since then, they have added vitis vinifera grapes, such as merlot, riesling, tempranillo and cabernet sauvignon.

“They have been the most challenging.” Wilkinson said.

“I knew I could learn the chemistry, every chemical reaction that goes on in the wine,” added Wickizer. “That’s not hard. Now I am learning more subtle things, like pairing wine with foods.”

Pecan Creek Winery has gone from a few hundred cases a year to about 2,000 today. About 200 vines are planted around Wickizer’s home and winery facility and 4,200 at Wilkinson’s property a mile and a half down the road.

The wines have won multiple awards at such events as the San Francisco Chronicle, Texas International and Finger Lakes International wine competitions.

Pecan Creek started harvesting this year’s crop this week, and harvest should go through September.

The 68-year-old Wickizer swims 7 miles a week and rides his bicycle as much as possible. He was an avid hunter and twice traveled to the Arctic Circle by canoe. When he and wife Joan, who grew up in the wine country around Hermann, Missouri, were married in 1980, they honeymooned on the Canadian side of the Boundary Waters Wilderness and paddled a canoe for a week to get there.

They have two grown daughters. Rebecca lives in Colorado and Laura works and lives in Muskogee, often helping out at the winery.

So, what else is new?

(turn west at The Castle of Muskogee off U.S. 69 and follow the winery signs)

Kate Beckinsale has never gone on a date

Five years after Dunkin' made its first long-heralded re-entry into the area with a Broken Arrow store, a new location of the popular doughnut shop is set to open Friday in midtown.

The restaurant's website states that is will be "a fast-casual fusion of BBQ, Tex-Mex, and Southwestern flavors," with staples such as tortillas, chips, salsas, and sauces all made in-house.

The new Albert G's will take over a space that once housed a Logan's Roadhouse.

The new space is projected to be open by September.

The owners, the Three Sirens Restaurant Group, hope to reopen in time for the holiday season.

The new restaurant is the latest endeavor by Tulsa restaurateur Amelia Eesley.

The new location is operated by George, Richard and Anthony Martinez, who opened their first Russo's Coal-Fired Kitchen at 8941 S. Yale Ave., in 2013.

The evening will feature samples of dishes created by the nine participants in the current Kitchen 66 program.

Wines are displayed in the tasting room at Pecan Creek Winery in Muskogee. STEPHEN PINGRY/Tulsa World

Visitors chat with the Rev. Bob Wickizer (left) and his daughter Laura in the tasting room at Pecan Creek Winery. STEPHEN PINGRY/Tulsa World

Visitors can relax on the patio area outside Pecan Creek Winery in Muskogee. STEPHEN PINGRY/Tulsa World