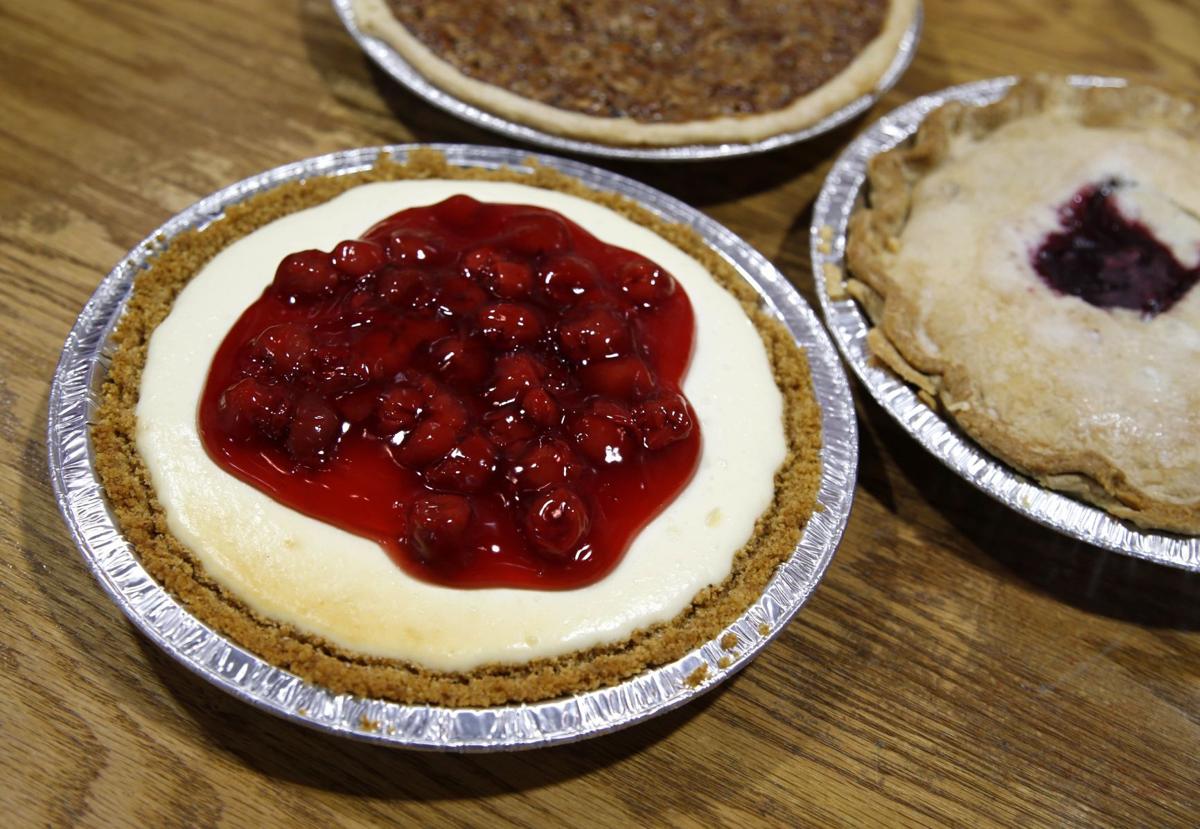 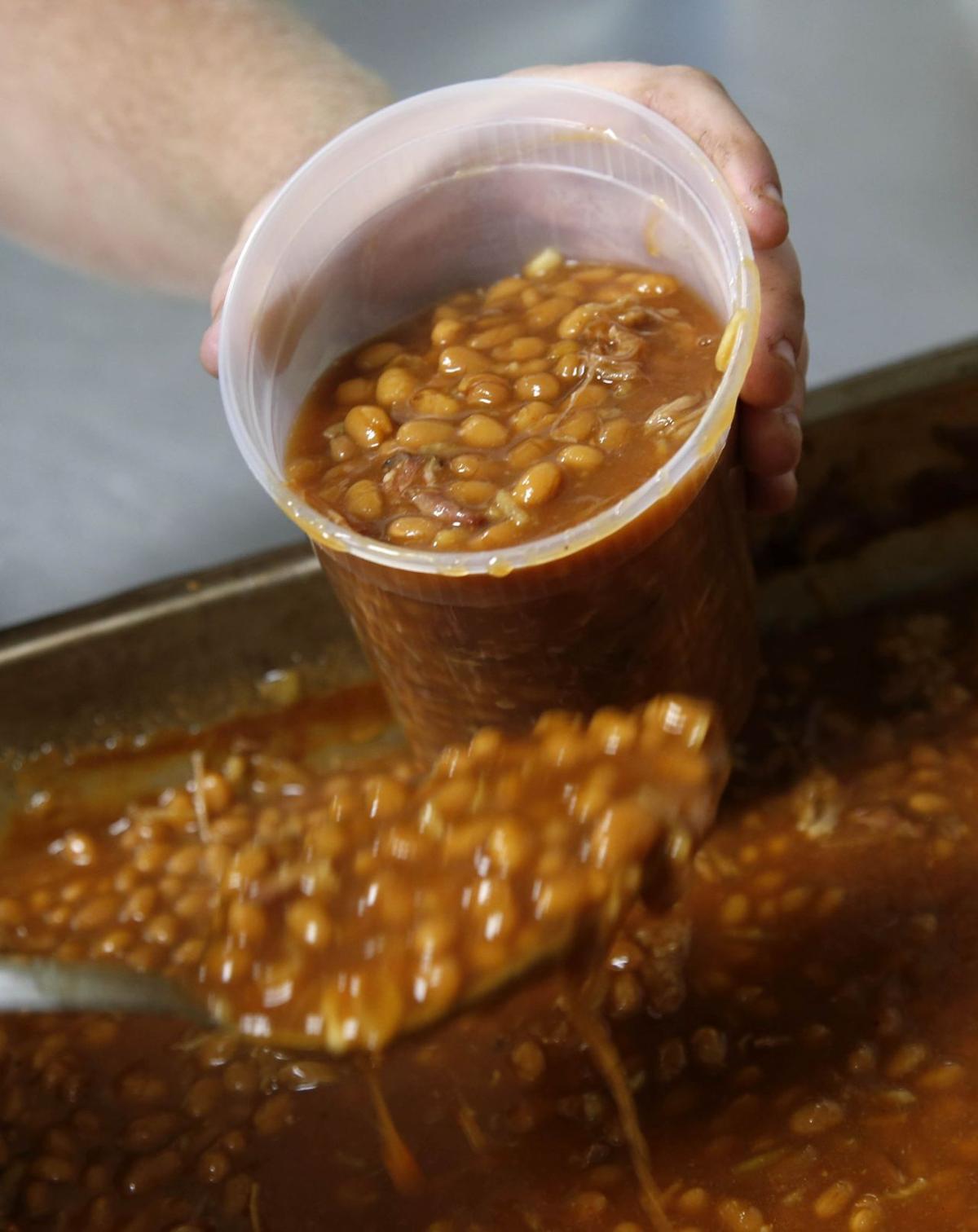 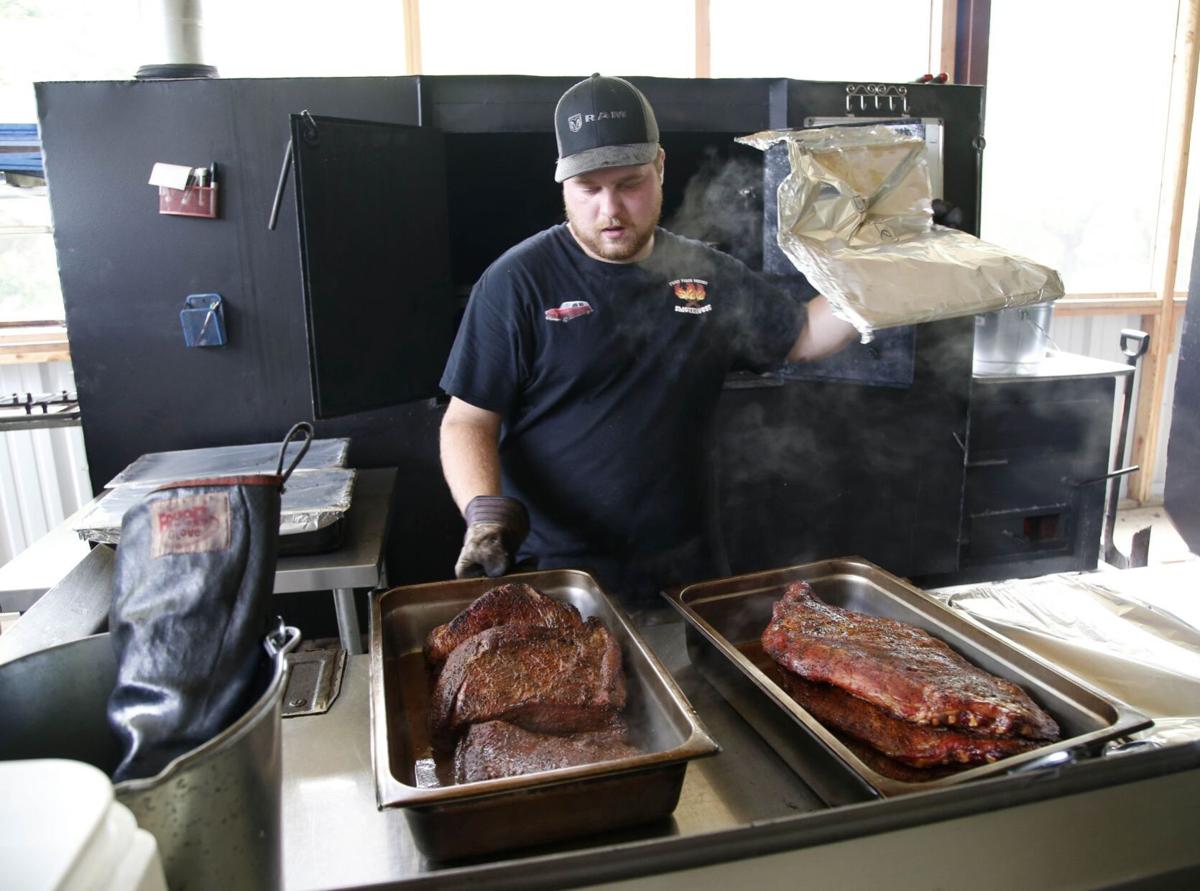 Decoda Ritchie pulls brisket (bottom left) and ribs our of the smoker on the back porch at Front Porch Bakery. Matt Barnard, Tulsa World 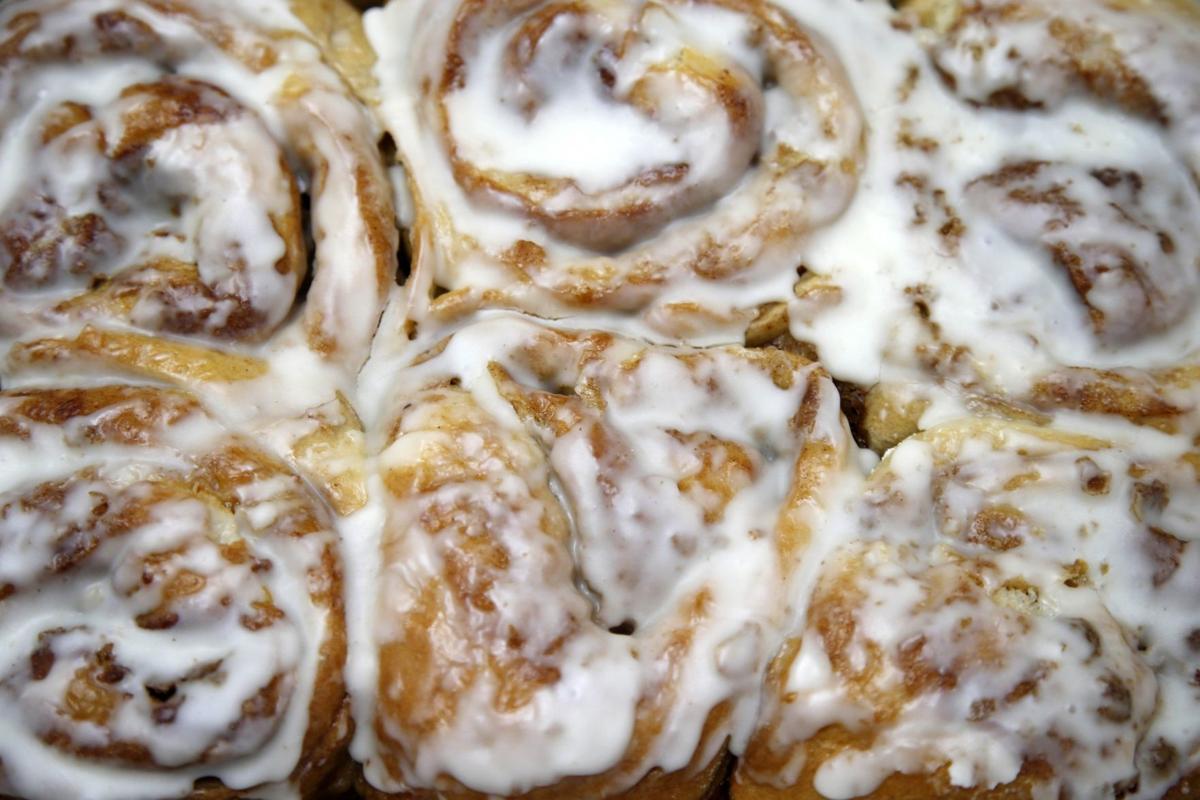 Cinnamon rolls are among the most popular items at Front Porch Bakery. Matt Barnard, Tulsa World 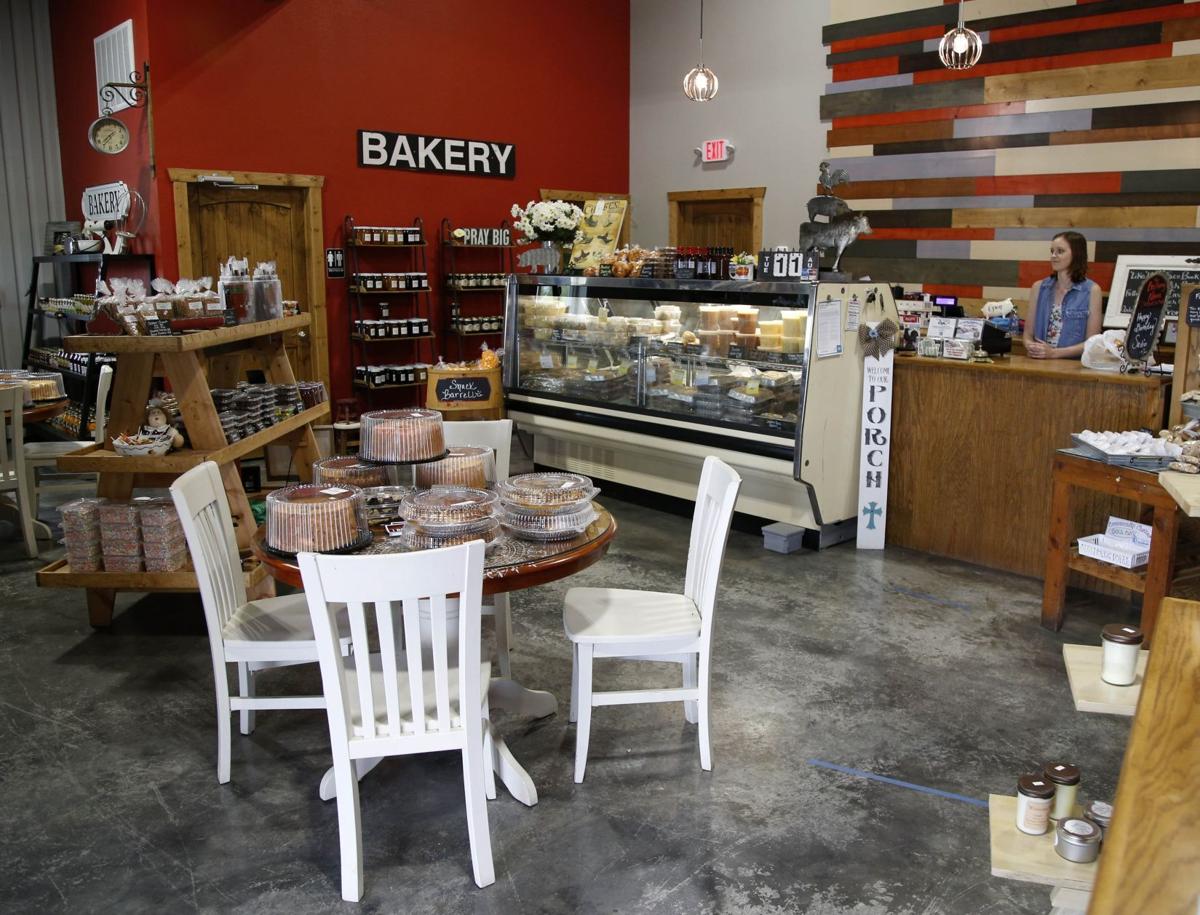 Front Porch Bakery offers a wide selection of baked goods and barbecue. This photo shows only a portion of the products. Matt Barnard, Tulsa World 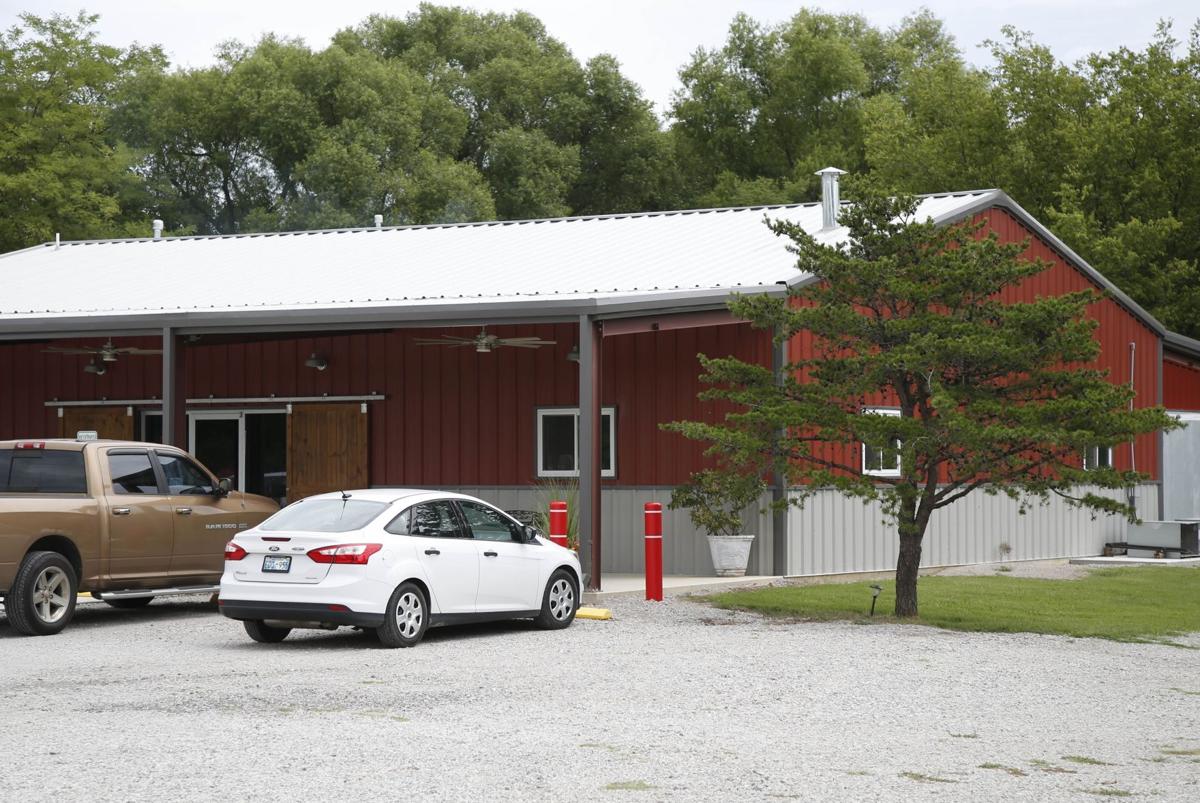 You want some ribs and smoked beans to go with those cinnamon rolls and iced sugar rosettes? Front Porch Bakery in Claremore has you covered.

The evolution of the full-service bakery and barbecue joint goes back five years for Melissa and Matt Holt.

“My mom was getting ready for her birthday, and she had told me months before that it had been years since she had a raisin pie,” Melissa Holt said. “I went to the cabinet and didn’t have anything to make the pie, so I called my friend who had this little bakery she had purchased three months earlier.”

The bakery was Ol’ Dutchman’s Bakery that had operated out of a 700-square-foot building for many years about 2 miles north of downtown Claremore on Oklahoma 66.

“When I went to pick up the pie, I told my friend I had left my corporate job and was looking for something more physical, something I wouldn’t have to sit in a chair,” Holt said. “You have to be careful what you pray for because she said, ‘Oh, my gosh, you should buy my bakery,’ and a week later, we owned the bakery.”

Not long after, in stepped Matt with an unconventional idea.

“He and his boss thought it would be a wise idea to put a smoker out front and sell barbecue,” Holt said. “That was the middle of July, and by the first of October, he had so much business that he quit his job as a welder and supervisor and started smoking full time. It just went on from there.”

By 2019, the Holts had outgrown their space and started construction on a much larger building on the same property. They moved into their new digs the week before Thanksgiving last year.

Almost all items are prepackaged for takeout, and the selection at first glance is overwhelming.

On the bakery side, customers will find shelves of house-made breads and display cases full of cookies (including keto cookies), cinnamon rolls, brownies, cakes, cheesecakes, pies and strawberry shortcake, to name a few.

Other savory items include queso, soups, salads, cotton candy and fudge. Some branded items include salsas, pickled okra, candy, jellies and jams. Amid all of this, it’s easy to overlook the house-made ice cream ($7 a quart).

The ribs were long and meaty and had enough fat for good flavor. The smoky beans were dotted with bits of pork, and the soup alone was worth the trip. It was thick with noodles and chunks of tender chicken in a pleasing broth that wasn’t too salty.

I was interested in the smoked bologna ($5.99 a pound) and the smoked meatloaf ($8.99 a pound), but those will have to wait for another trip, as well as the breads and pies.

The new red and gray building does not have exterior signage, but a small Ol’ Dutchman’s Bakery sign still is on a pole in the parking lot.

“We’ve had people from Tulsa, Bixby, Broken Arrow, Owasso, Collinsville and all the way from Bartlesville,” Holt said. “We have great customers.

“My mom, Phyllis, and Matt’s mom, Geneva, who passed a little over a year ago, bought in to this little thing we started and were such supporters from the beginning. Brothers and sisters and other family members help, too. If they aren’t painting or moving something, they will work the cash register. It’s a blessing.”

What the Ale: Beer of the Week, Pippin's Taproom's Maple Nut Beerios

Keep up with local restaurant news submitted to us at scene@tulsaworld.com.

Decoda Ritchie pulls brisket (bottom left) and ribs our of the smoker on the back porch at Front Porch Bakery. Matt Barnard, Tulsa World

Cinnamon rolls are among the most popular items at Front Porch Bakery. Matt Barnard, Tulsa World

Front Porch Bakery offers a wide selection of baked goods and barbecue. This photo shows only a portion of the products. Matt Barnard, Tulsa World