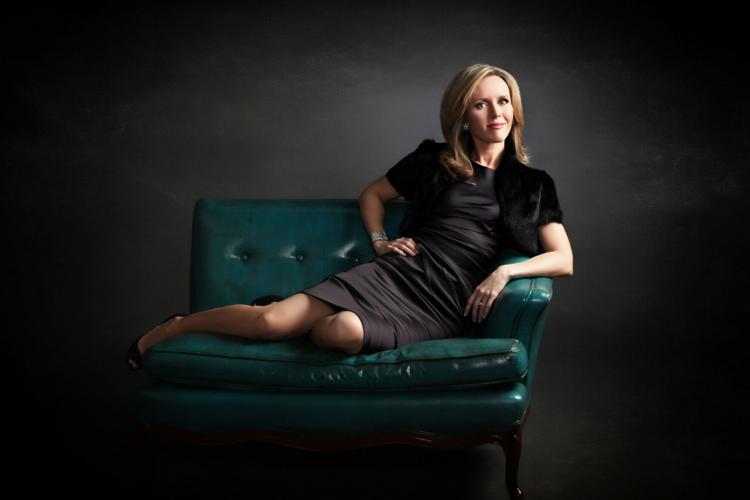 Operatic soprano Sarah Coburn will perform Saturday, Jan. 29, at the McKnight Center for the Performing Arts in Stillwater. 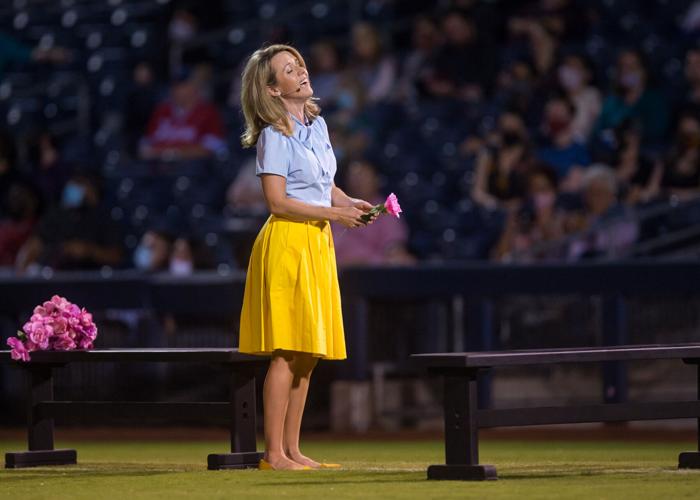 Sarah Coburn performs during the Tulsa Opera’s production of “Rigoletto” at ONEOK Field. 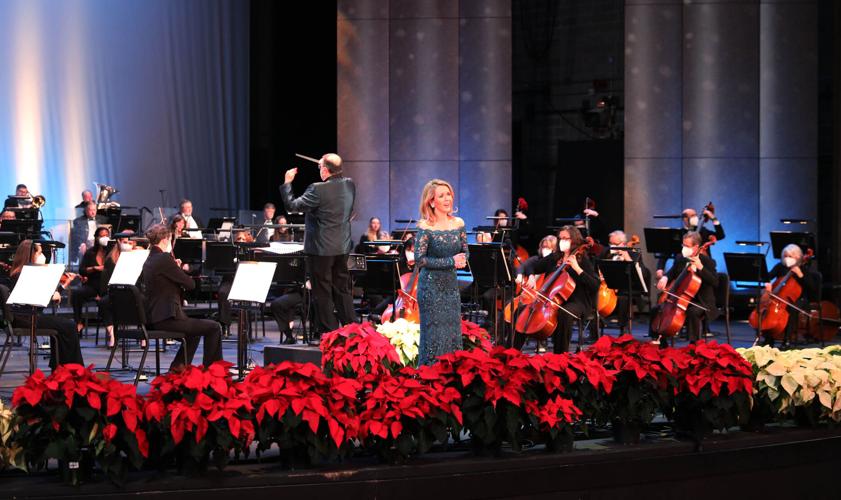 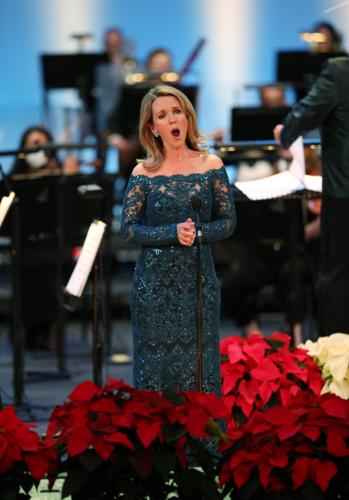 Sarah Coburn performed with the Tulsa Symphony Orchestra for its TV special, “A Hometown Holiday.” 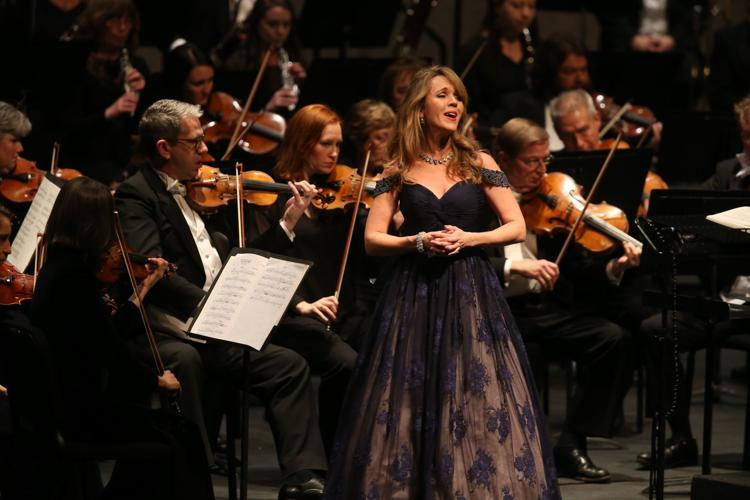 Soprano Sarah Coburn performs with the Tulsa Symphony at the Tulsa Performing Arts Center in January 2020.

It’s taken the better part of two years, but Sarah Coburn is finally getting the chance to perform at her alma mater’s new concert hall.

Coburn will perform for an evening of art songs and arias Saturday, Jan. 29, at the McKnight Center for the Performing Arts, which opened in 2019 on the campus of Oklahoma State University in Stillwater.

When the center opened, Coburn was one of the artists scheduled to perform in its inaugural season. However, the onset of the COVID-19 pandemic meant that Coburn’s concert kept getting postponed.

“I am just grateful for the opportunity, and I am thrilled to be performing at OSU, regardless of the season or year,” said Coburn, who earned a bachelor’s degree in music education at OSU in 1999. “The last two years have taught me to just laugh, breathe, say ‘oh well!’ and be ready for anything.”

Coburn has faced a good deal of “anything” over the past few years. In October 2020, she starred in Tulsa Opera’s unique baseball adaptation of Verdi’s “Rigoletto” at Tulsa’s ONEOK Field, the first opera production to be performed in the United States before a live audience since the start of the pandemic. She was featured in the Tulsa Symphony’s holiday concert that was recorded and shown on local TV in December 2020, and she also recorded the Bellini opera “I Puritani,” with tenor Lawrence Brownlee, which was released in August 2021.

But Coburn also had to deal with the death of her father, former U.S. Senator Tom Coburn, who died in March 2020, and a breast cancer diagnosis that required surgery.

And she is currently recovering from a bout of COVID-19.

“My case was mild compared to how it could have been without being vaccinated,” she said. “I had a very sore throat at the beginning, which gave way to the cough that I am battling now. My hope is that it will disappear before next week, so that I can breathe deeply in order to sing. My vocal cords seem to be fine, and for that I am grateful.”

Coburn will be doing more than singing during her time in Stillwater. She will be taking part in a week-long residency that will have her working with OSU and Stillwater students.

She will also lead three masterclasses that will be open to the public — two in which she will work with aspiring opera singers, 1:30 p.m. Jan. 25 and 27, and one on performance anxiety, 3 p.m. Jan. 27. All masterclasses will be held in the McKnight Center’s Recital Hall.

“The McKnight Center is honored to host Sarah Coburn for what is sure to be an unforgettable performance and slate of unique learning opportunities,” said Mark Blakeman, Marilynn and Carl Thoma executive director of the McKnight Center. “Sarah’s immense talent is evident in her performances and accolades. Everyone will learn so much from her coaching and experiences. The university continues to raise the bar in alumni involvement and excellence.”

Out of an abundance of caution, Coburn requested she be interviewed through email. The following has been slightly edited for clarity.

Tulsa World: What are some of the experiences from your time at OSU that have helped shape you into the artist and person you are today?

Sarah Coburn: My experience at OSU was wonderful in that I was encouraged to be a well-rounded musician, and not only focused on performance. While I was at OSU, my focus was mainly on choral music, but my love for opera and the classical vocal repertoire began to grow, thanks to the encouragement of my wonderful voice teacher, Julie McCoy.

TW: What are some of the works you will be performing in concert, and why were they selected for this program?

SC: Some of what we will be performing is repertoire that I have done before, but that I truly love. The first half will be a bit lighter and fun, and includes the silly and fabulous Act 1 aria from Rossini’s “Le Comte Ory.” The second half includes more dramatic and melancholy repertoire, which are some of my favorites, like the Rachmaninoff and Strauss. We are including “Beim Schlafengehen,” one of the “Vier letzte Lieder (Four Last Songs”), which I was so lucky to sing with the Tulsa Symphony in 2020 before all of the madness descended upon us.

TW: Who will be accompanying you at this concert?

SC: I am so fortunate to work with the fabulous pianist Lyndon Meyer on a regular basis, and I am so grateful for his willingness to play this concert. Much of our program will feature him; the second half is especially virtuosic for the piano. Rossitza Goza, the TSO concertmaster, will join us for three pieces on the program. I feel so spoiled to work with these incredible musicians.

TW: Do you conduct masterclasses often? How do you, as the “teacher,” approach these sessions? What are you hoping to see from the participants, and what do you want to share with them?

SC: The masterclass setting is a unique one, and I certainly prefer being on the teaching side of it! One of the most interesting and daunting things about being a classical singer is that we really don’t “practice” what we do. When we rehearse in a practice room, we are rehearsing the discipline of practice, not performance. It is impossible to simulate the energy, adrenaline, and even the acoustics of being on stage with an audience present. The only way one can practice performing is to actually perform for a live audience over and over.

A masterclass setting can be incredibly intimidating. Not only is the student being asked to perform for a public audience (which they may not have had many opportunities to do), but they are also being asked to be incredibly vulnerable with their developing voice and every aspect of their presentation. It is incredibly personal. Someone giving a masterclass has the power really to tear down or build up a young musician, and that is a responsibility I do not take lightly. The nightmare that people have about performing naked in front of an audience is a pretty accurate metaphor for the masterclass, especially for singers who may already struggle with performance anxiety. My hope is to make it fun and lighthearted, and to encourage students to find freedom in letting go of perfectionism.

TW: One public session is about performance anxiety. Is that something with which you struggle? Is some kind of anxiety necessary for a performer?

SC: We all need stress to be alive; it is our perception of that stress that can undo us in performance situations. I have a long history of dealing with performance anxiety, some of which I will share with the students. I am also finishing a master’s degree in professional counseling, so I hope to share some of what I have learned in the last few years regarding the power we have over our thoughts.

Celebs with local ties talk about their Okie traits

Okies in the News

"While it is a dark tale — the devil is, after all, involved — it is presented with a raucous, exhilarating energy by an abundantly talented cast and on-stage band that makes this old story pulsate with new life."

Review: Signature Symphony takes audience on a 'journey' at 'Rachmaninoff and the Dance Floor'

"The four pieces that made up the program, presented Saturday at the VanTrease PACE, were performed in reverse chronological order, so that the concert was also something of journey back through time..."

Tickets for 'Six' on sale Thursday

Originally created for the Edinburgh Fringe Festival, “Six” has earned high praise from critics, with the New York Times calling it a “rollicking, reverberant blast from the past.”

The Woody Guthrie Center will open new exhibit on its namesake's life work, titled "Woody Guthrie: People are the Song," on Wednesday, Oct. 12.

As a street performer, Brant Matthews used to eat fire in exchange for pizza. Now he's an in-demand fire-eater who is popular on the fair circuit.

From arts shows to zombie hunts, there are many options for those who want to get out and enjoy fall events.

More than 40 tribes will be represented at the 17th annual Cherokee Art Market, with artwork ranging from beadwork, pottery, paintings, basketry, sculptures, textiles and more.

Operatic soprano Sarah Coburn will perform Saturday, Jan. 29, at the McKnight Center for the Performing Arts in Stillwater.

Sarah Coburn performs during the Tulsa Opera’s production of “Rigoletto” at ONEOK Field.

Sarah Coburn performed with the Tulsa Symphony Orchestra for its TV special, “A Hometown Holiday.”

Soprano Sarah Coburn performs with the Tulsa Symphony at the Tulsa Performing Arts Center in January 2020.