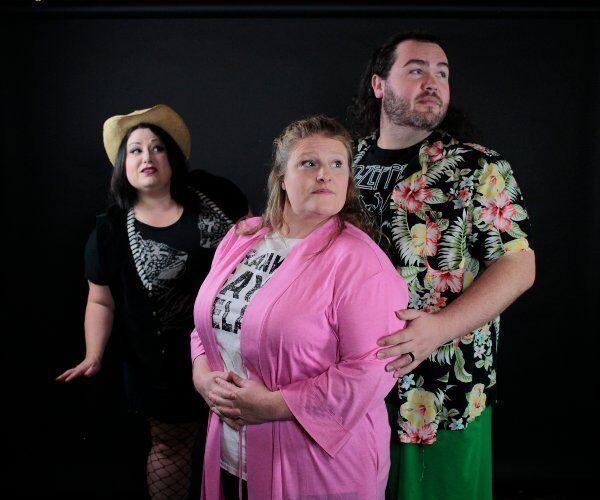 Pippi (Kristen Simpson) is looking to come between the agoraphobic Jeannie (Kara Staiger) and her husband Norbert (Sean Rooney) in “The Great American Trailer Park Musical,” being presented by American Theatre Company. 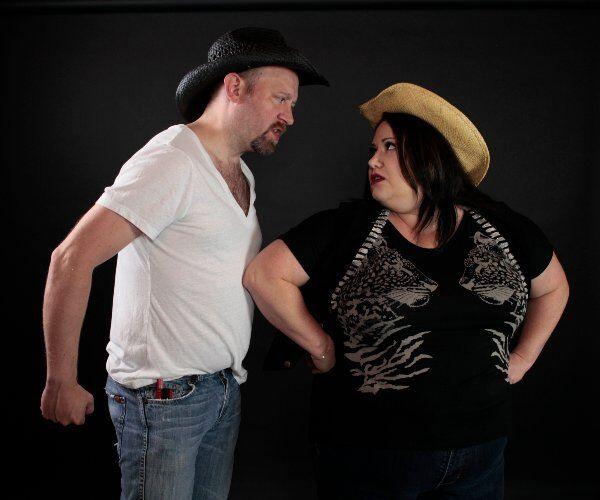 When Pippi, a woman on the run from her latest romantic mistake, ends up in the middle of the Armadillo Acres Trailer Park in the less-than-scenic town of Starke, Florida, she figures it’s a place “where the folks got so many problems of their own they won’t much notice mine.”

And it’s true that the denizens of the double-wides dotting the landscape have their fair share of peccadilloes, ranging from hysterical pregnancies to agoraphobia to an overly healthy appetite for gossip. But the presence of Pippi in the park is going to upend life in Armadillo Acres in ways potentially worse than the tropical storm bearing down on the town.

That’s the situation in “The Great American Trailer Park Musical,” which opened the American Theatre Company’s season Friday at the Tulsa PAC. The show, with music and lyrics by David Nehls and a book by Betsy Kelso, is a deliriously salty send-up of all things tacky in late-20th century pop culture, from confrontational, confessional reality shows to TV commercials for everything from toilet bowl cleansers to faux Japanese knives.

Nehls’ score is a pastiche of pop styles that often evokes familiar songs such as “It’s Raining Men” and “Ball of Confusion.” But it also gives the cast, which is loaded with some impressive voices, the chance to indulge in all sorts of over-the-top emoting as they lament about how love has been “Flushed Down the Pipes” or how to survive living on “This Side of the Tracks.”

At the heart of the show — and a heart it does have — is the love story of Jeannie (Kara Staiger) and Norbert (Sean Rooney), high school sweethearts whose marriage hasn’t been the same since the couple’s only child was snatched away while Jeannie was at the hair salon.

The tragic events turned Jeannie into an agoraphobe, unable to so much as set foot outside her trailer. Norbert tries luring her out with the promise of a 20th anniversary celebration at the Ice Capades, but when even that doesn’t work, he heads off to the local strip club, where he chances to meet its newest employee, Pippi (Kristen Simpson), who offers him a ride home — and a few other services, as well.

Overseeing all this is a trio of long-time park residents, Betty (Jennifer Lynn), Lin, as in “Linoleum” (Leah Rose) and Pickles (Claire Sbannotto), who serve as a kind of Greek chorus to all the permutations of the plot.

Director Karlena Riggs keeps the action moving at a slightly less than frantic pace around Richard Ellis’ mobile set (the performance we attended Sunday afternoon had a few slight malfunctions that actually seemed to work with the comedy rather than distract from it). Christy Stalcup led the four-piece band in a crisp performance of Nehls’ score.

“The Great American Trailer Park Musical” is definitely not for the younger crowd, but even its saltiest moments contain a bit of sweetness. And, as is the case with just about every “great American musical,” love — or something like it — wins out in the end.

The production is billed as "The 50th Anniversary Tour," and one of the goals director Timothy Sheader had for this version was to return it to its rock-album roots.

There are many upcoming events related to Black History Month. Here are some of local interest.

Get a 'Clue': Tulsa Project Theatre returns with criminal comedy

Director Morgan Hicks is the co-founder and arts engagement director of Theatre Squared in Fayetteville, a company that has earned national acclaim.

"Director Liz Bealko, who is making her Theatre Tulsa debut, has guided this large ensemble with a sure and steady hand, and a penetrating eye for detail."

The production that comes to Tulsa, courtesy of Celebrity Attractions, is the brainchild of director Timothy Sheader and cutting-edge choreographer Drew McOnie.

If the Italian composer Ottorino Respighi and the Ukrainian-born Sergei Prokofiev have one thing in common, it is their ability to get the abs…

Which stand-up comics are coming to Tulsa in 2023? January performers include Howie Mandel, Sam Morril and Steve Trevino. A new comedy club will open here in the spring.

Pippi (Kristen Simpson) is looking to come between the agoraphobic Jeannie (Kara Staiger) and her husband Norbert (Sean Rooney) in “The Great American Trailer Park Musical,” being presented by American Theatre Company.