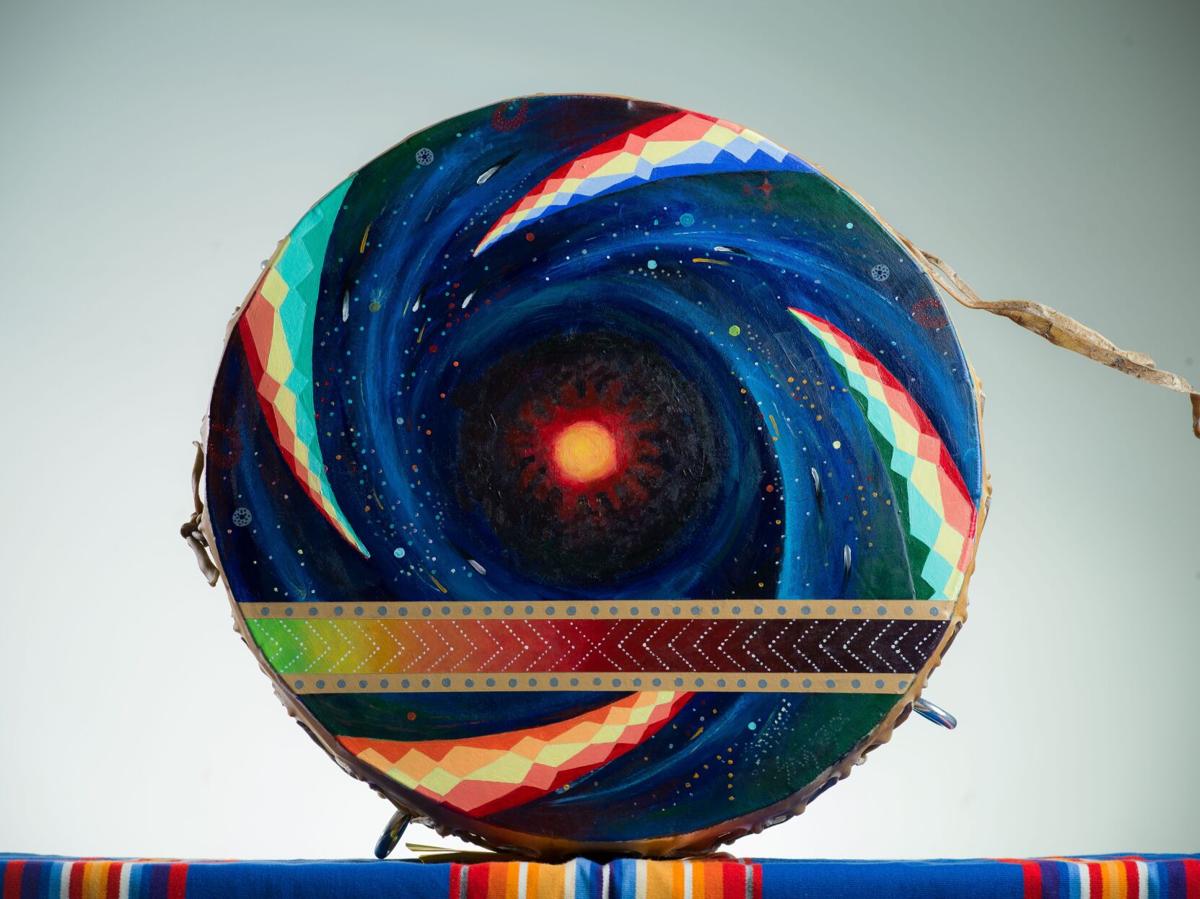 “Little Stars from the Sky Lodge” is a drum by Jessica Moore Harjo and Rock Pipestem. It’s made from pine, birch plywood, bison hide, acrylic paint and steel. 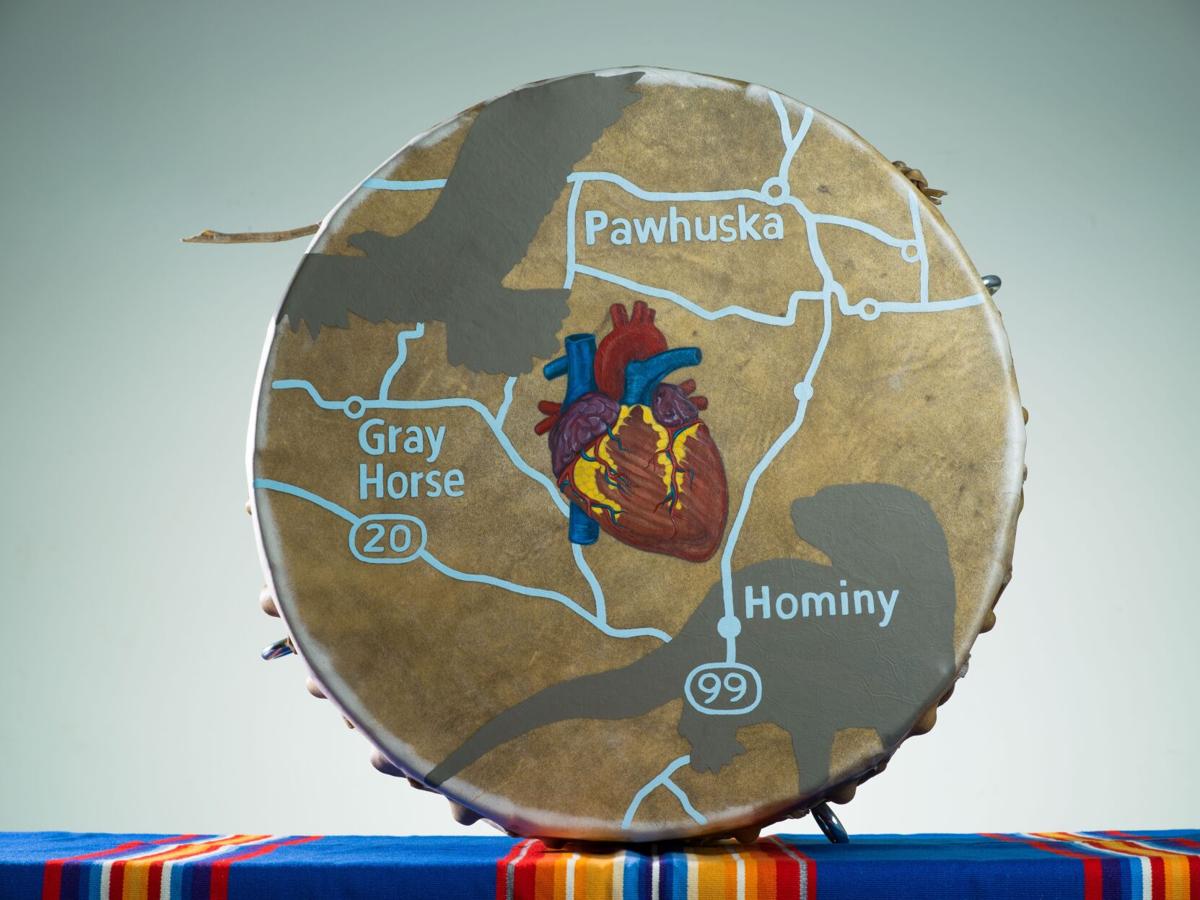 “From the Heart,” by Norman Akers and Rock Pipestem, is on exhibit at the Osage Nation Museum. 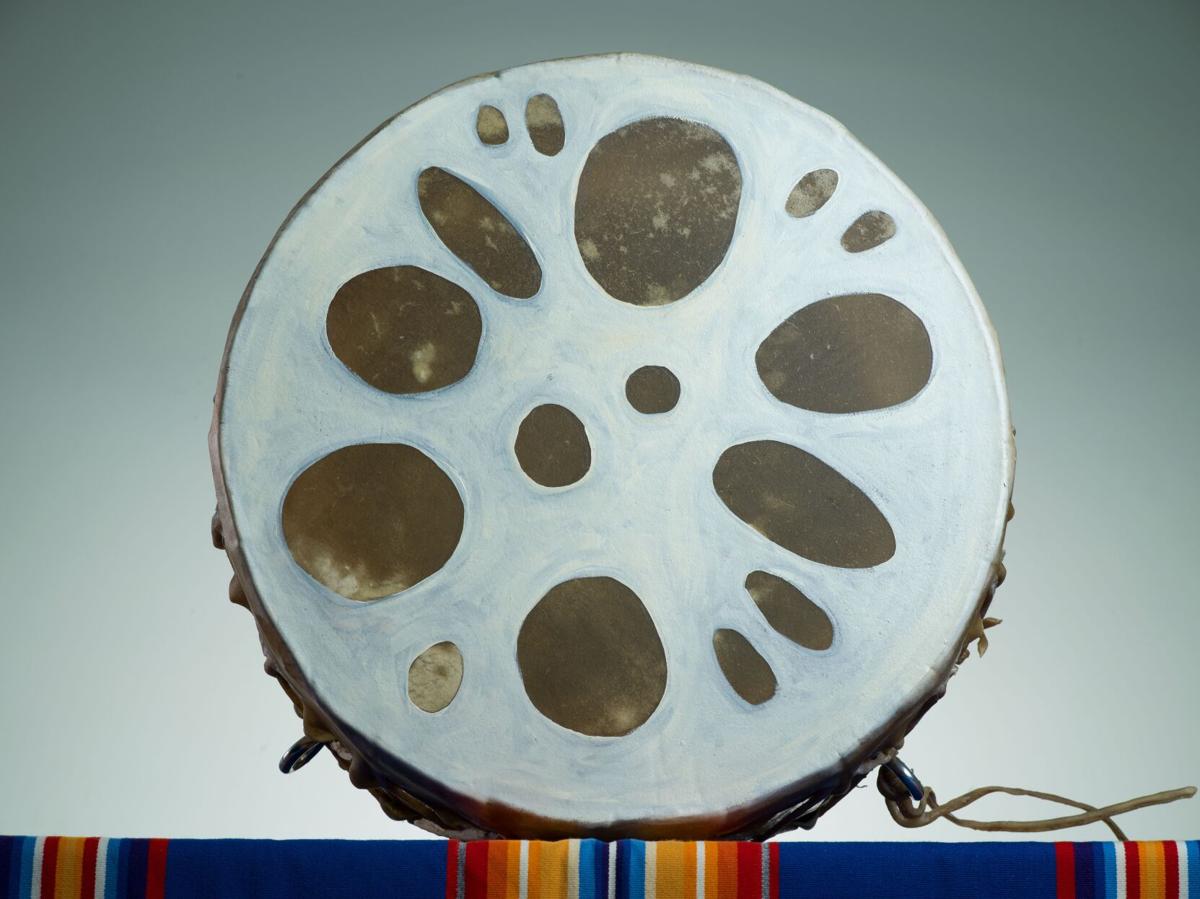 “Untitled” is a drum by Sarah Elsberry and Rock Pipestem. 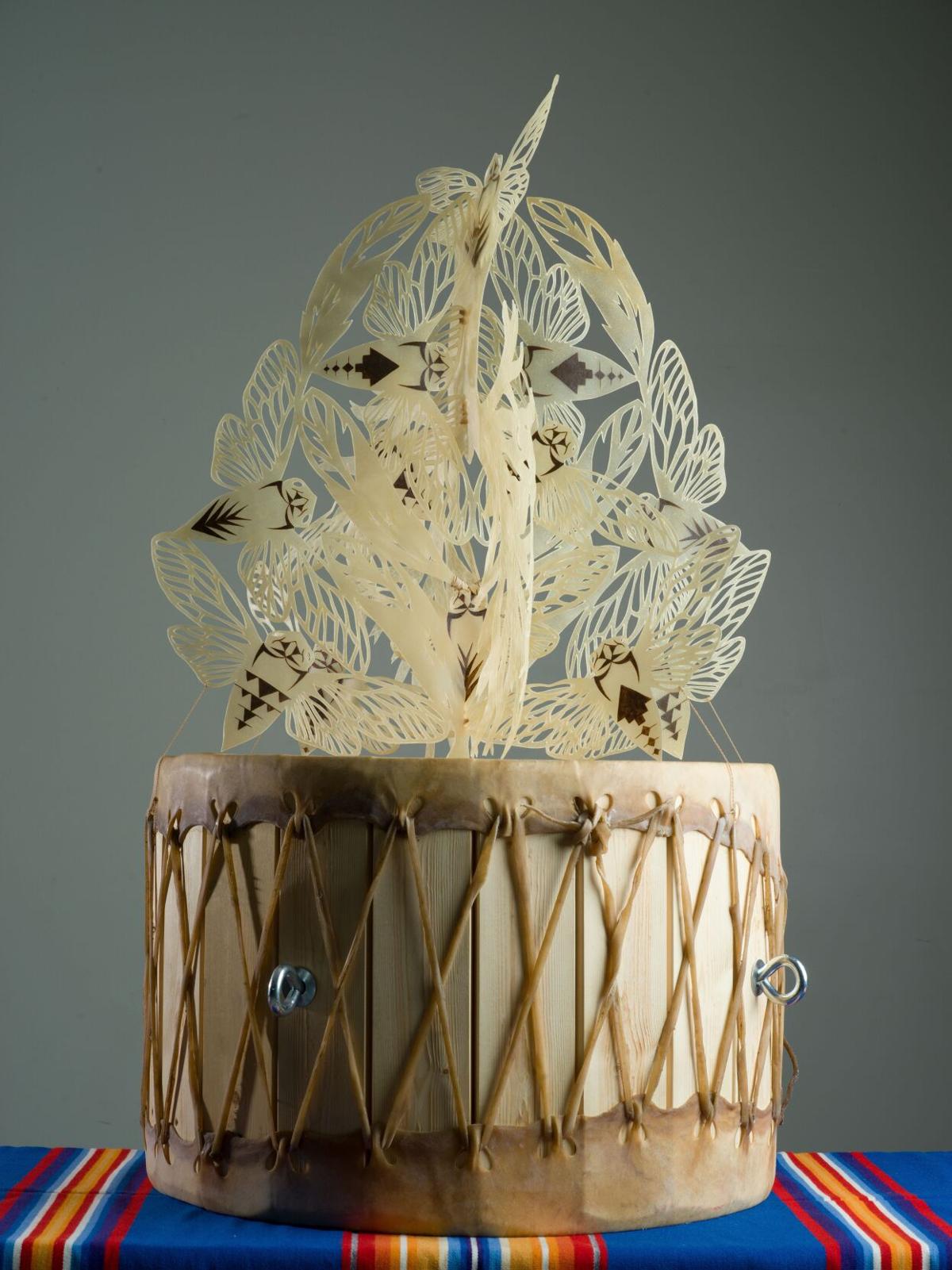 “Untitled” is a drum by June Carpenter and Rock Pipestem.

The most basic of musical instruments — the drum — is at the heart of the culture of the Osage Nation, whose sound brings people together to sing, to dance, to share, to mourn, to rejoice.

The drum is also at the heart of a new exhibit, which opens Friday at the Osage Nation Museum in Pawhuska. “Voices from the Drum” is a collection of 20 hand drums that Osage artists have used as their canvas to express their individual responses to the importance of the drum in Osage culture.

The exhibit opens with a free public reception Friday, July 23, at the museum, 819 Grandview Ave., in Pawhuska.

The Osage Nation Foundation, a nonprofit organization dedicated to preserving and promoting the Osage culture, initiated the idea for the exhibit.

“This was the first time we collaborated directly with artists on a project,” said Bill Webb, the foundation’s executive director. “In the past, we would present grants to individual artists for projects they would do on their own.

“But this exhibit is very much in keeping with our mission,” Webb said. “We want to preserve Osage culture, and we also want to do all we can to support Osage artists.”

The drums used in the exhibit were made by Osage drum maker Rock Pipestem, a nationally recognized artist who has demonstrated his drum-making abilities at the National Museum of the American Indian in Washington, D.C.

The finished drums were then personally presented to the Osage artists commissioned for the project by Pipestem himself, sharing with them the thoughts he had about creating the individual drums.

“Some of the artists are well-established and nationally known, such as Anita Fields, Yatika Fields, Norman Akers and Wendy Ponca,” said Marla Redcorn-Miller, director of the Osage Nation Museum. “Others are emerging artists, some of whom will have their work shown in a museum for the first time with this show. We wanted to feature as diverse an array of interpretations and stories as we could.”

In addition to the artists’ creations, the exhibit will include one historic drum, on loan from the American Legion Post 198 in Pawhuska.

“This is a drum that has been used at veterans’ dances for many years,” Redcorn-Miller said.

Webb said the idea of including a historic drum used specifically for ceremonies was a way to underscore the purpose of the exhibit.

“The drum has long been a major culture symbol for the Osage, past and present,” he said. “It has been at the center of the nation’s cultural activities for generations. And this exhibit is a unique opportunity to take that cultural icon, and from that icon create something new. We are preserving this icon, while artists are creating new drums that themselves will become part of Osage culture.”

Photos: See new images of actors in 'Killers of the Flower Moon' in Pawhuska

"Voices from the Drum"

Martha Stewart confirms she has a boyfriend

Martha Stewart confirms she has a boyfriend

Ma Cong and Val Caniparoli have been tasked with creating a new version of "The Nutcracker" for Tulsa Ballet, which will have its world premiere Friday, Dec. 10 at the Tulsa PAC.

Marilynne Robinson, prize-winning author of "Gilead" and "Housekeeping," spoke to a group of students Friday at Tulsa's Central Library, in advance of her being presented with the Peggy V. Helmerich Distinguished Author Award.

'Doubt: A Parable' opens Thursday at the Tulsa PAC

"In a way, it's actually rather difficult to say exactly what this play is about," said Gallagher, who is directing the World Stage Theatre production that opens Thursday, Dec. 2, at the Tulsa PAC.

Tickets on sale for symphonic Disney concert at ONEOK Field

Excerpts from films including “Frozen,” “Moana,” “Tangled,” “Wreck-it Ralph,” “Zootopia,” “Big Hero 6,” “The Princess and the Frog” and the 2011 film of “Winnie the Pooh” will be shown on the ballpark’s Jumbotron as the Tulsa Symphony Orchestra performs the music May 20, 2022.

The orchestra, led by guest conductor Ron Spigelman, will present this concert experience twice — first at the McKnight Center for the Performing Arts in Stillwater, then at the Tulsa PAC.

Tickets are now on sale for Tulsa Ballet's world premiere production of "The Nutcracker," which will be presented Dec. 10-19 at the Tulsa PAC, 101 E. Third St.

Watch Now: Five things to do this weekend including Cody Johnson at BOK Center

Want to get out and about? Here are some suggestions.

Cindy Williams brings 'Me, Myself & Shirley' show to Tulsa PAC

Tickets on sale Dec. 1 for Disney's 'A Decade in Concert'

Tickets will go on sale Dec. 1 for “Walt Disney Animation Studios: A Decade In Concert,” a special event featuring the Tulsa Symphony Orchestra performing selections from the scores of some of the most popular animated films of the past 10 years.

TSO presents an evening of song and dance

Hicks, who led the orchestra with a winning combination of elegant grace and impish flair throughout the evening, was in her element here, handling the complexities of the score with panache and drawing out a superb performance from the orchestra as a whole, as well as from a number of individual players.

“Little Stars from the Sky Lodge” is a drum by Jessica Moore Harjo and Rock Pipestem. It’s made from pine, birch plywood, bison hide, acrylic paint and steel.

“From the Heart,” by Norman Akers and Rock Pipestem, is on exhibit at the Osage Nation Museum.

“Untitled” is a drum by Sarah Elsberry and Rock Pipestem.

“Untitled” is a drum by June Carpenter and Rock Pipestem.