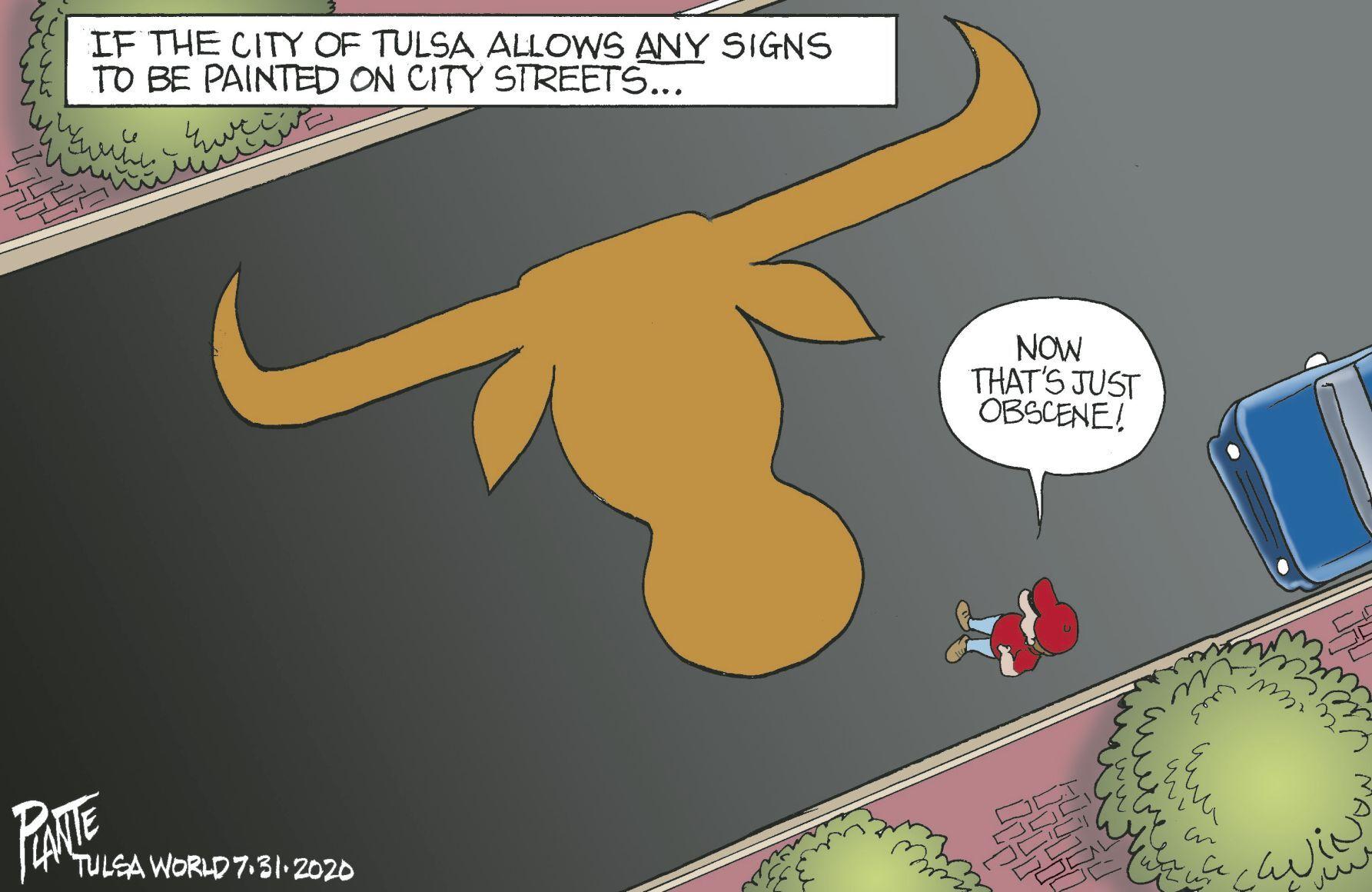 In 50 years, the two cities have taken different paths.

The reason not just Tesla has chosen Austin for business expansion lies in our leaders and in our resistance to accept change.

The only good thing about this is that now we can send our children off to college, and they can go and live and work in Austin.

It has been said that when any governing body mandates Americans wear masks in public, this is socialism or a dictatorship.

My reply is, “Do you drive? Do you stop at stop signs? If so, then you’re letting the government tell you what to do.”

Wearing a mask is like obeying traffic signals. All parties are kept safe from hurting each other.

Masks are just a simple effort to help protect everyone.

The Oklahoma Congressional delegation owes us an explanation on their votes on HR 7573, the resolution that would remove racist and Confederate statues from the U.S. Capitol building and grounds.

Removing statues does not erase history.

History is history. Glorifying people who would take up arms against the U.S. is wrong.

Timothy McVeigh is part of our history, but I’m sure we won’t be putting up a statue of him anytime soon. He also thought his murderous treachery was patriotic.

Removing statues just says we don’t approve of past behavior of those individuals, and we choose not to honor that disservice and treason.

District 2 U.S. Rep. Markwayne Mullin was derelict in his duty and didn’t cast a vote.

Thank you to those House members who stood up for the U.S. and Oklahoma. Shame on Hern, Cole and Mullin who sold out the people of Oklahoma and the U.S.

Editor’s note: The legislation passed 305-113. All Democrats voted for it, and the GOP members split, with 72 supporting and 113 opposing the bill. One Republican voted present.

From a practical standpoint, the Tulsa mask ordinance is ineffectual because there’s no penalty for not wearing a mask in situations where it’s required.

And there’s a problem with that, too.

Unless a business owner calls the police to request the removal of a person for trespassing, TPD will not respond to a location where a customer is refusing to wear a mask and won’t leave the premises.

Most small-business owners aren’t going to complain to police because they don’t want to lose those customers. And who can blame them, considering the financial hit those businesses took during the shutdown?

This means that at places like Titan Sports in Tulsa, which has mask-requirement signs at all entrances and won’t allow any maskless adults to enter the building, people will openly defy the ordinance once inside the facility.

For every one person who wears a mask, probably 10 do not. The danger of spreading COVID-19 at large venues like this can’t be overstated.

If Tulsa officials allow the flaunting of the mask ordinance at large venues to continue, it will have accomplished nothing.

Columnists
Jenny Hellman: Who should decide if children should be in online learning at TPS? The parents should
By Jenny Hellman
08.01.20
STEPHEN PINGRY

On Tuesday, I read with dismay Superintendent Deborah Gist’s recommendation for Tulsa Public Schools to be taught entirely through distance learning for at least the first nine weeks of the fall semester.

I am still trying to wrap my head around how a decision that impacts so many facets of life for students and their families may be dictated from above if the Tulsa board of education approves this recommendation in the upcoming week. I believe the decision on what is best for a child should be left in the hands of parents.

As the parent of an incoming second-grader at Emerson Elementary, I have spent the summer in countless discussions with other parents from across TPS and local private schools, and the refrain repeated over and over has been, “How can we possibly continue with virtual learning as the only option?”

Initially, there were the logistical questions. It may have been possible this spring to sustain a virtual learning environment, when a full, government-mandated shutdown compelled employers to support or at least tolerate parents trying to juggle jobs while also facilitating at-home learning for their students.

This no longer exists, and employers are becoming frustrated with parents’ requests for flexible schedules to support child care needs. Jobs are at risk. Some families may be able to have one parent shift from the workforce to being home to support virtual learning, but what of single parent homes? Or homes that cannot afford to lose an income? Or the homes of frontline workers?

As time passed and it became clear distance learning may not be just a short-term solution, the questions started to arise surrounding the appropriateness of distance learning for a prolonged period of time, especially for elementary children. The research against extended screen time use is extensive. I found that attempting to have my son on a screen for learning for any length of time this spring was a disaster. Not only was he unable to focus, the effects on his overall temperament were stark.

And finally, as the months have continued to pass, the concerns about the social, emotional and mental health of children and their parents have grown. Relative isolation wears on every member of the family — from the youngest children not yet in school to the school-aged children being asked to learn apart from their peers and teachers to the parents being asked to teach their children while also juggling mounting household and career responsibilities.

As a working mom of three, these concerns weigh especially heavy. Historically, women have borne the brunt of this “second shift,” and throughout the pandemic I have seen this inequality magnified. The decision to mandate distance learning will have a particularly acute effect on the mothers in our community.

I do hear the concerns of teachers and staff in the schools, and as a district we should do all we can to protect these invaluable workers, just as we are protecting all frontline workers supporting our vibrant community everyday.

But I believe we are doing a disservice to the community if we limit the options of TPS children to only distance learning — either through the Tulsa Virtual Academy or through individual schools’ distance learning curriculum. I believe the parents of each child are the best equipped individuals to make the decision on the safest spot for their child for the school year.

Instead, because of my ZIP code, a decision that should consider both the physical safety of the child, but also the emotional, mental and social health of the child and the overall well-being of the family, may be dictated from above by the Tulsa Board of Education.

I urge the board to allow parents to decide for their own children what is best.

Jenny Hellman is a working mother of three, including one Emerson Elementary student. She lives in Tulsa.

Local dignitaries take part in a groundbreaking for a Muncie Power Products factory at the Peoria Mohawk Business Park in Tulsa on July 23, 2020. The company makes industrial auto parts and will be the first tenant in the new development. MATT BARNARD/Tulsa World

Construction started last week on a new 250,000-square-foot plant for the Indiana-based manufacturer of power take-offs and other hydraulic components for work trucks.

The new plant will replace a facility at 7217 E. Pine St. that employs 250. The project kicks off excitement for the 120-acre Peoria-Mohawk Business Park, a public-private partnership designed to bring more jobs, income and hope to north Tulsa.

City leaders celebrated the new project with golden shovels and press availabilities. They treated it like the big deal that it is.

This is the sort of good economic development news that Tulsa needs after the disappointment of losing the massive Tesla CyberTruck Gigafactory to Austin.

The two projects aren’t comparable in scale, employment or price, obviously, but intuitively, we all know that Tulsa’s future prosperity has a better chance of growing out of the development of home-grown businesses and entrepreneurs who have already chosen this market than it does at winning the Tesla lottery.

That isn’t to say it was wrong to compete for the thousands of jobs Elon Musk was offering. We only argue that we should also get excited about a bundle of smaller deals that promise good-paying jobs for hard-working Tulsans. And we are.

The Peoria-Mohawk Business Park is a conscious effort to use public and private resources to bring more business development to Tulsa’s north side.

Several groups deserve note for their funding and work in that cause, especially the George Kaiser Family Foundation and the citizens of Tulsa, who approved an extension of the Vision 2025 tax program in 2016. That package included $10 million to prepare the land for industrial occupants.

In 2016, we predicted that project on the southeast corner of 36th Street North and Peoria Avenue would lay the groundwork for Tulsa’s next big economic boom.

And we stand by that prediction.