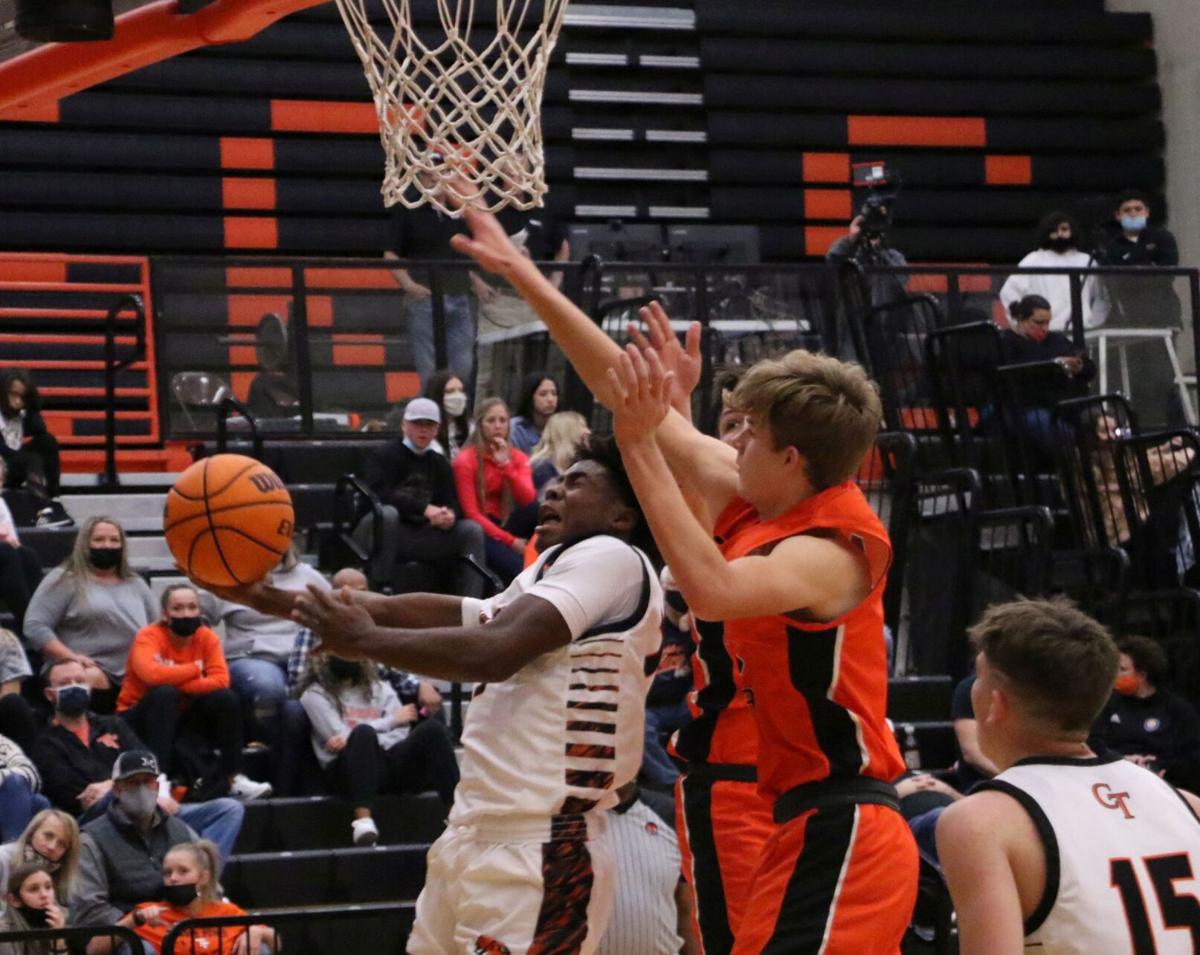 Na'Kylan Starks finds opposition on his way to the basket in conference action between Coweta and Tahlequah on Jan. 6. Coweta won the battle 59-56 on the home court. 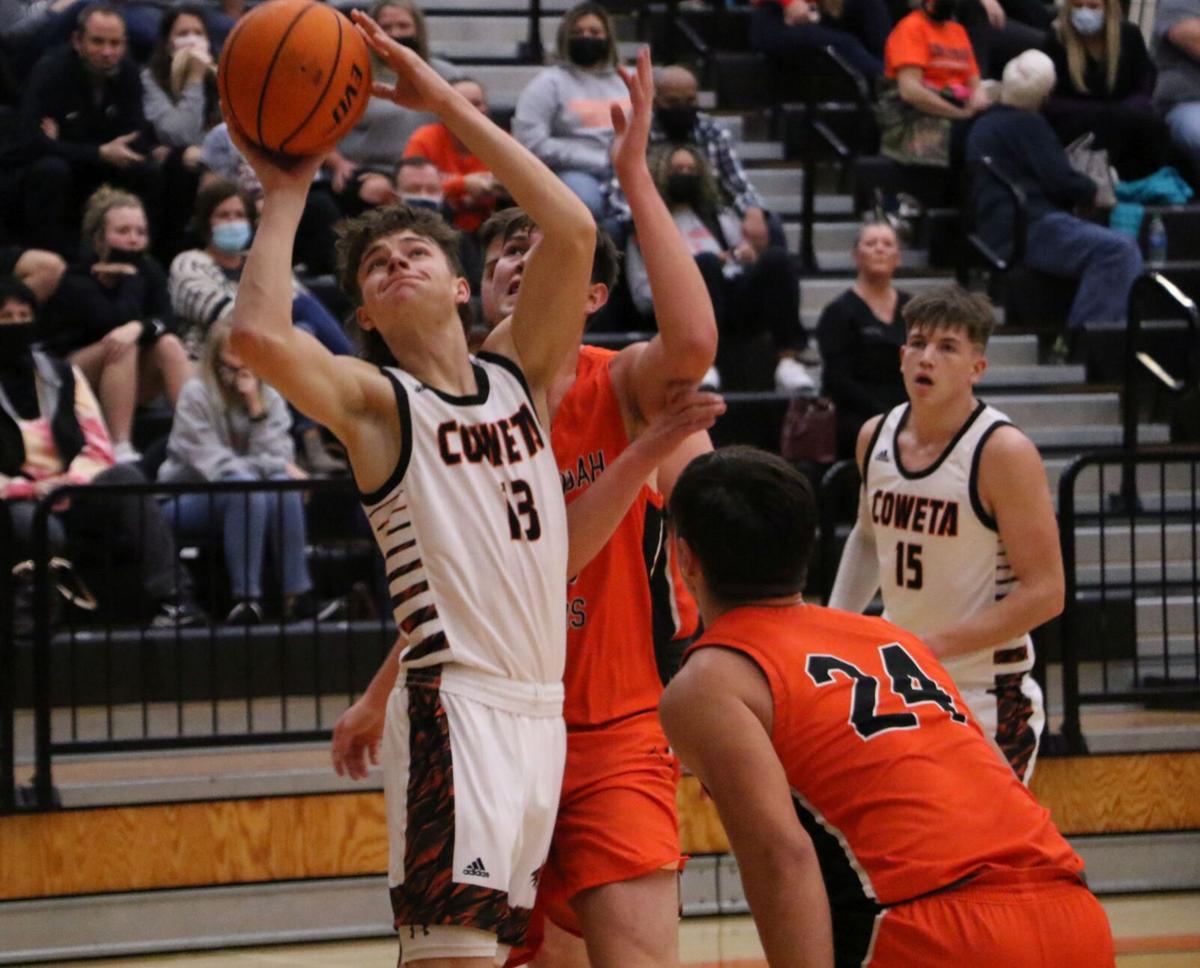 Landon Hitchcock (13) drives pas the outreached arm of a Tahlequah defender for a shot on goal in Coweta’s home game Tuesday night. 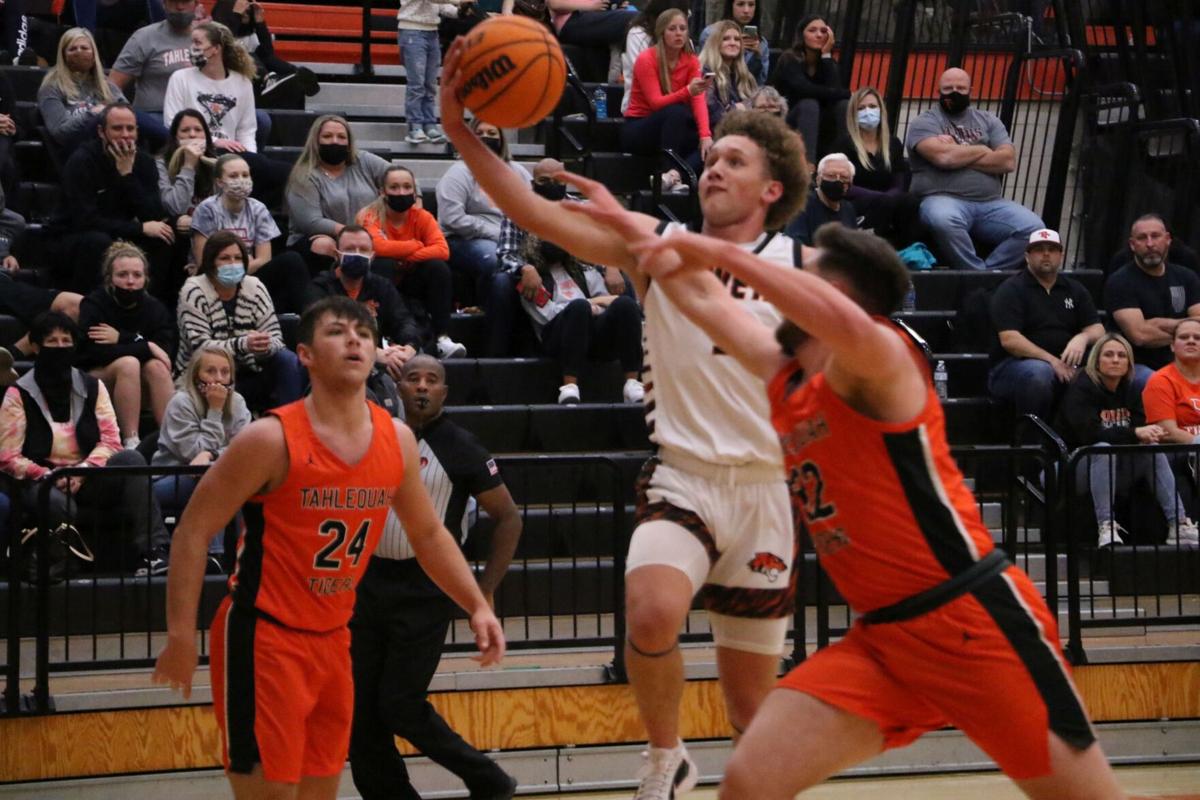 Mason Ford (3) goes in for a layup in Coweta’s varsity matchup with Tahlequah on the home court Tuesday night. 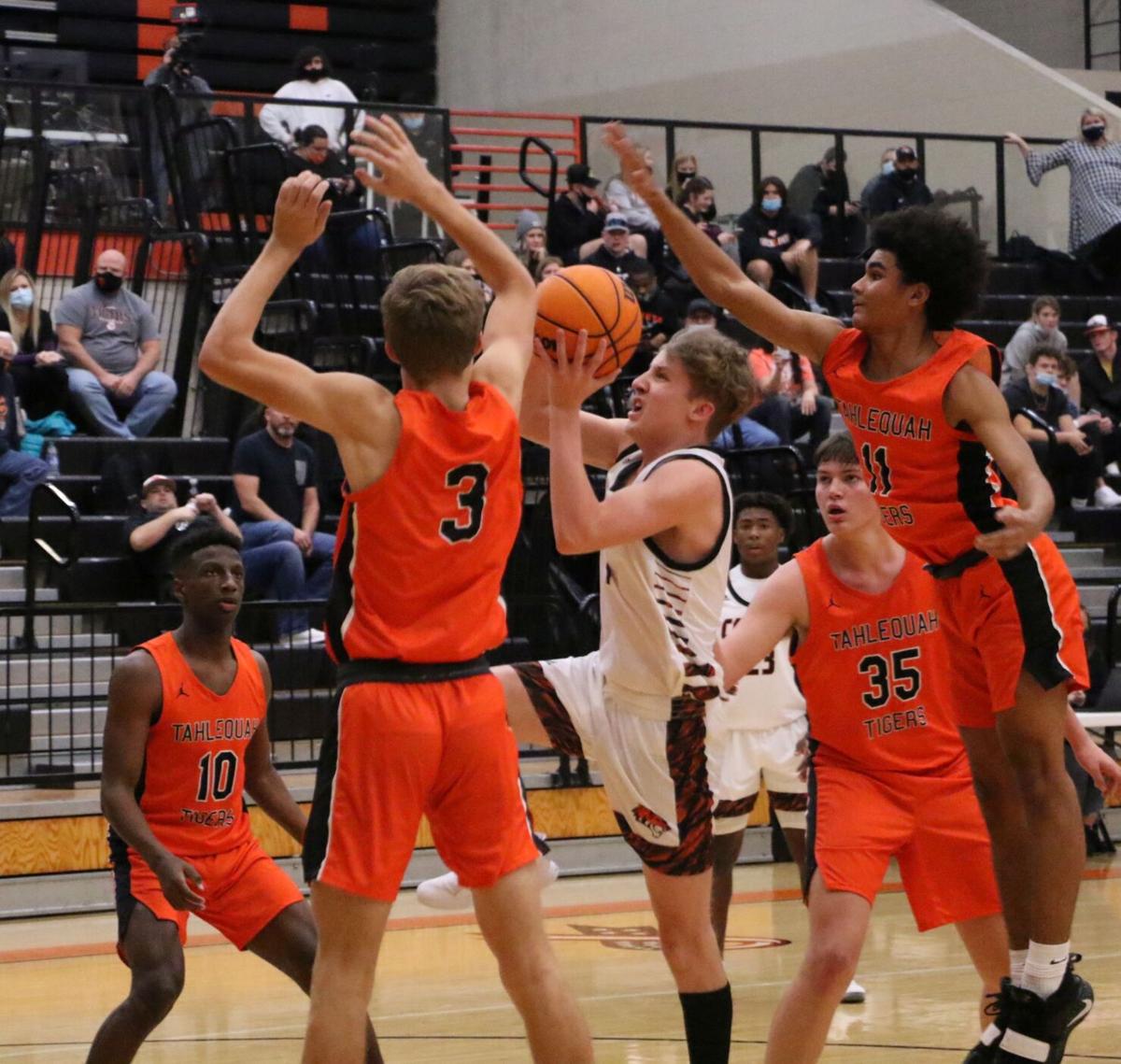 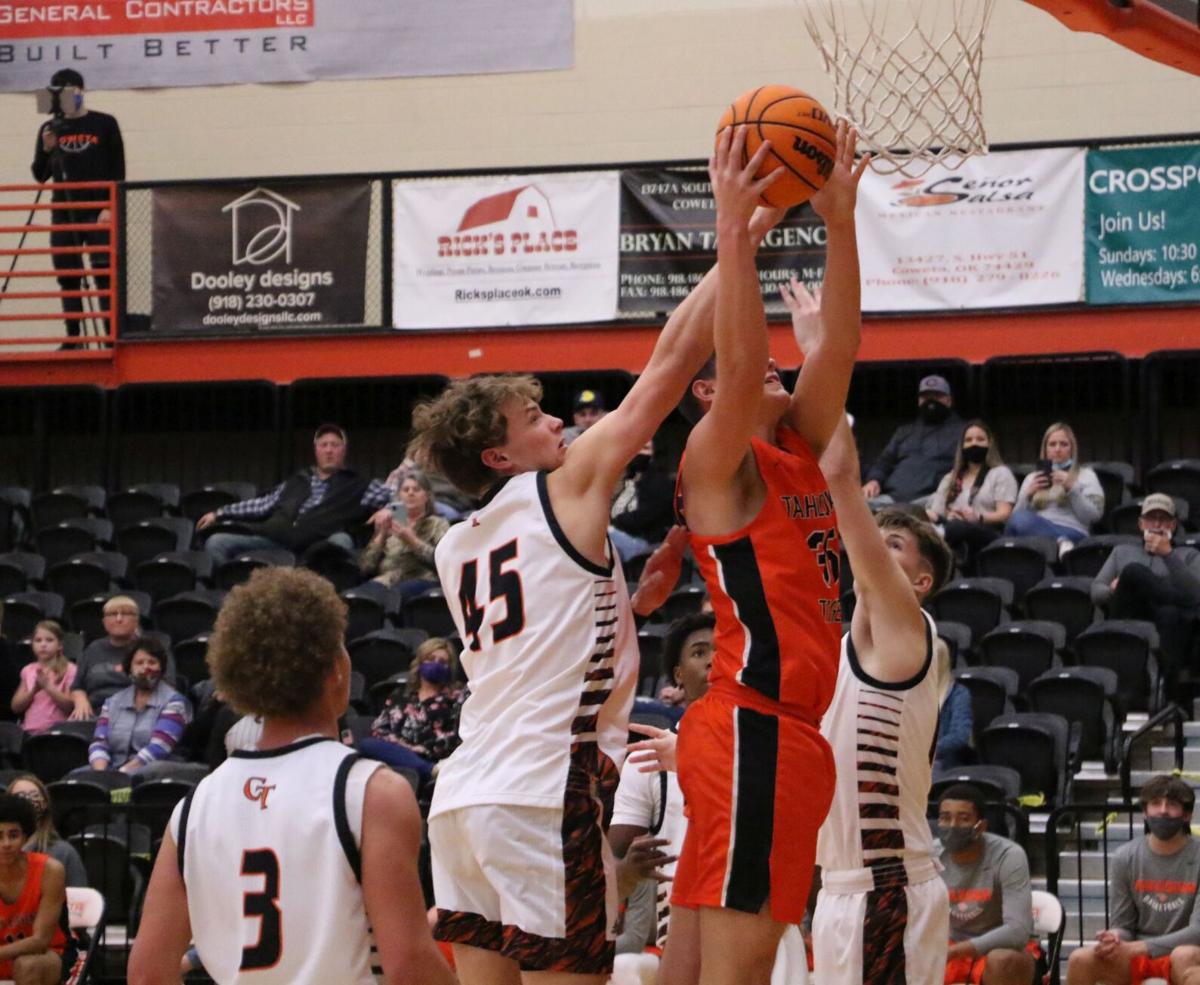 Jacob Mills (45) prevents a Tahlequah player from getting a bucket in conference action between Coweta and Tahlequah on Tuesday.

The Coweta boys’ basketball season is finally underway and the Tigers quickly made their presence known with a 3-1 run in action last week. They are now 4-2 on the court.

Coach Brandon Maddux said his team seems to get better with each game. He is excited about where they stand as they head into another busy week of action.

On Jan. 4, the Tigers took to the court for the first time after being quarantined due to COVID-19 before the holiday. They dropped an 86-83 decision to OKC storm.

Maddux said their offense was on par, but their defense and rebounding let them down in the losing cause.

Coweta dug an early hole, but climbed out quickly as Tye Lair came off the bench and caught fire. The Tigers took a five-point lead into halftime, but the Storm came out in the third period to outscore Coweta 21-11.

Eventually, the Tigers clawed their way back and cut the OKC lead to two points.

Free throws dominated the fourth quarter and the Storm connected on clutch shots from the free throw line to hold off Coweta.

Lair, a junior, scored a career-high 34 points. He hit 10 of 18 shots, five from beyond the three point arch. Senior Jacob Mills added 18 points and seven rebounds before fouling out.

The Tigers bounced back nicely with a 59-56 Metro Lakes Conference win over rival Tahlequah on Tuesday. It was a back-and-forth affair with Coweta making huge plays on both ends of the court.

Lair continued his hot shooting off the bench with 25 points. He was seven for eight from three point range.

On Thursday, Coweta faced a feisty Hilldale team on the first day of the Fort Gibson Festival, which replaced the cancelled Shriner Tournament. Coweta jumped on the Hornets early and never looked back, rolling to an 81-52 win.

Lair sparked the Tigers off the bench with 24 points, including seven three-pointers. Senior Tryston Doherty played his best game of the early season, tallying 10 points on five of six shooting. He added four rebounds and four assists to the stat chart.

Coweta finished the Fort Gibson Festival on Friday with a convincing 80-50 win over Fort Gibson. The Tigers were hot from three point range and ever really cooled off.

Senior Jacob Mills led the Tigers in scoring with 15 points and got his first double-double of the season with 10 rebounds.

“We shot the ball extremely well, especially from long range,” Maddux said. “Tye Lair showed how unselfish he is, volunteering to come off the bench. He had the hot hand throughout the week. Tryston Doherty played his best basketball in a Coweta uniform and is starting to star in his role and play with much needed energy and enthusiasm.

“We are getting contributions from everyone that plays right now and that was the key to us winning three of four games this week,” he added. “We are fortunate to have some great young men that are unselfish and that is a big key in the chemistry we are developing right now.

“The best thing about us right now is we are doing some great things, but we are nowhere near our full potential!”

This week the Tigers will play at Claremore on Tuesday, host Collinsville for Senior Night on Friday and at Glenpool on Saturday.

Wrestling season is finally in full swing for the Wagoner Bulldogs. In recent action they finished second at the NEO Tournament, placed fifth …

Coweta Tiger wrestlers won their home opener with a 45-28 dual win over Fort Gibson on Thursday, Jan. 7. The evening included an overtime win,…

The year 2020 will go down in history as anything but ordinary thanks to a global pandemic that affected much of the sports world. Nonetheless…

It’s been a long wait but the Wagoner wrestling season is finally underway. The Bulldogs hosted their own tournament Dec. 30 and recorded thei…

Na'Kylan Starks finds opposition on his way to the basket in conference action between Coweta and Tahlequah on Jan. 6. Coweta won the battle 59-56 on the home court.

Landon Hitchcock (13) drives pas the outreached arm of a Tahlequah defender for a shot on goal in Coweta’s home game Tuesday night.

Mason Ford (3) goes in for a layup in Coweta’s varsity matchup with Tahlequah on the home court Tuesday night.

Jacob Mills (45) prevents a Tahlequah player from getting a bucket in conference action between Coweta and Tahlequah on Tuesday.