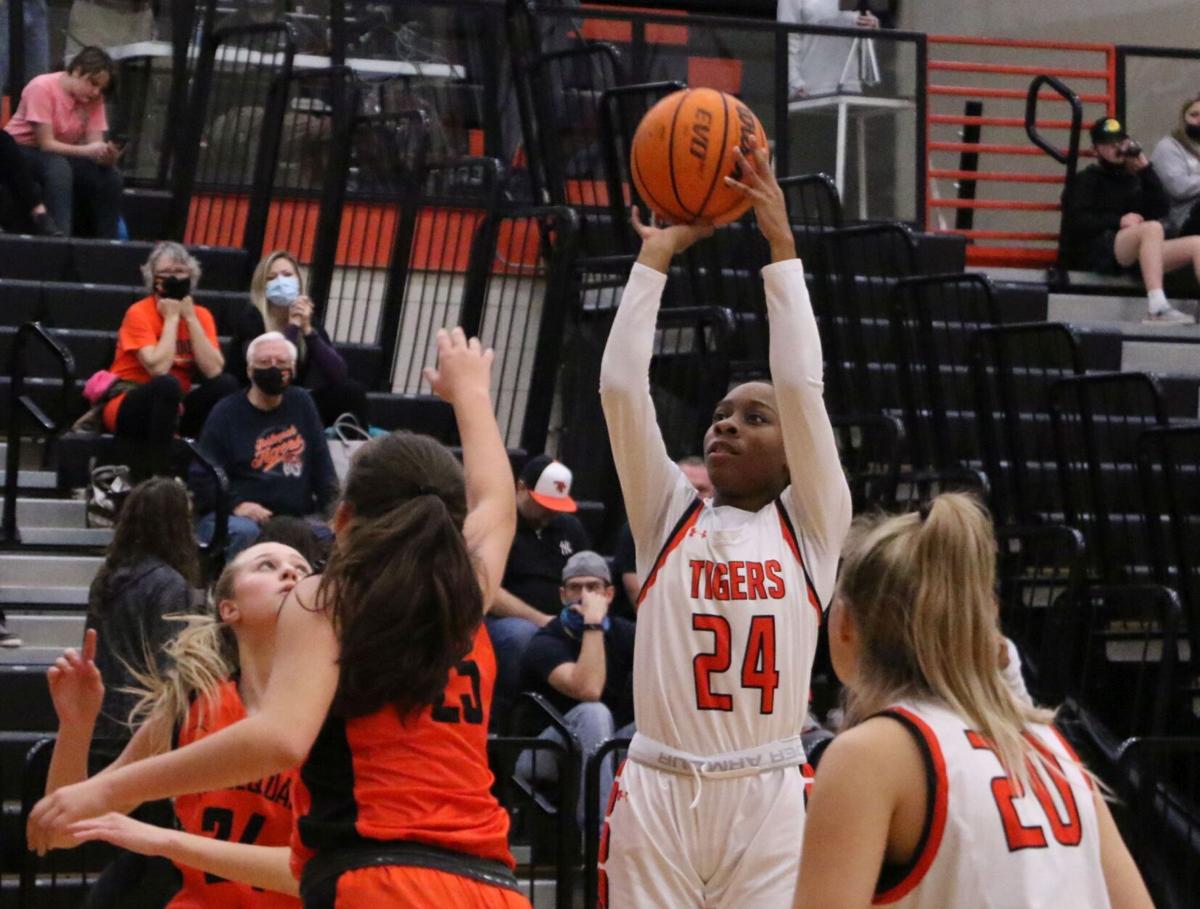 Linda Brice (24) goes up for two of her 14 points in Coweta’s home court matchup with Tahlequah on Tuesday, Jan. 5. 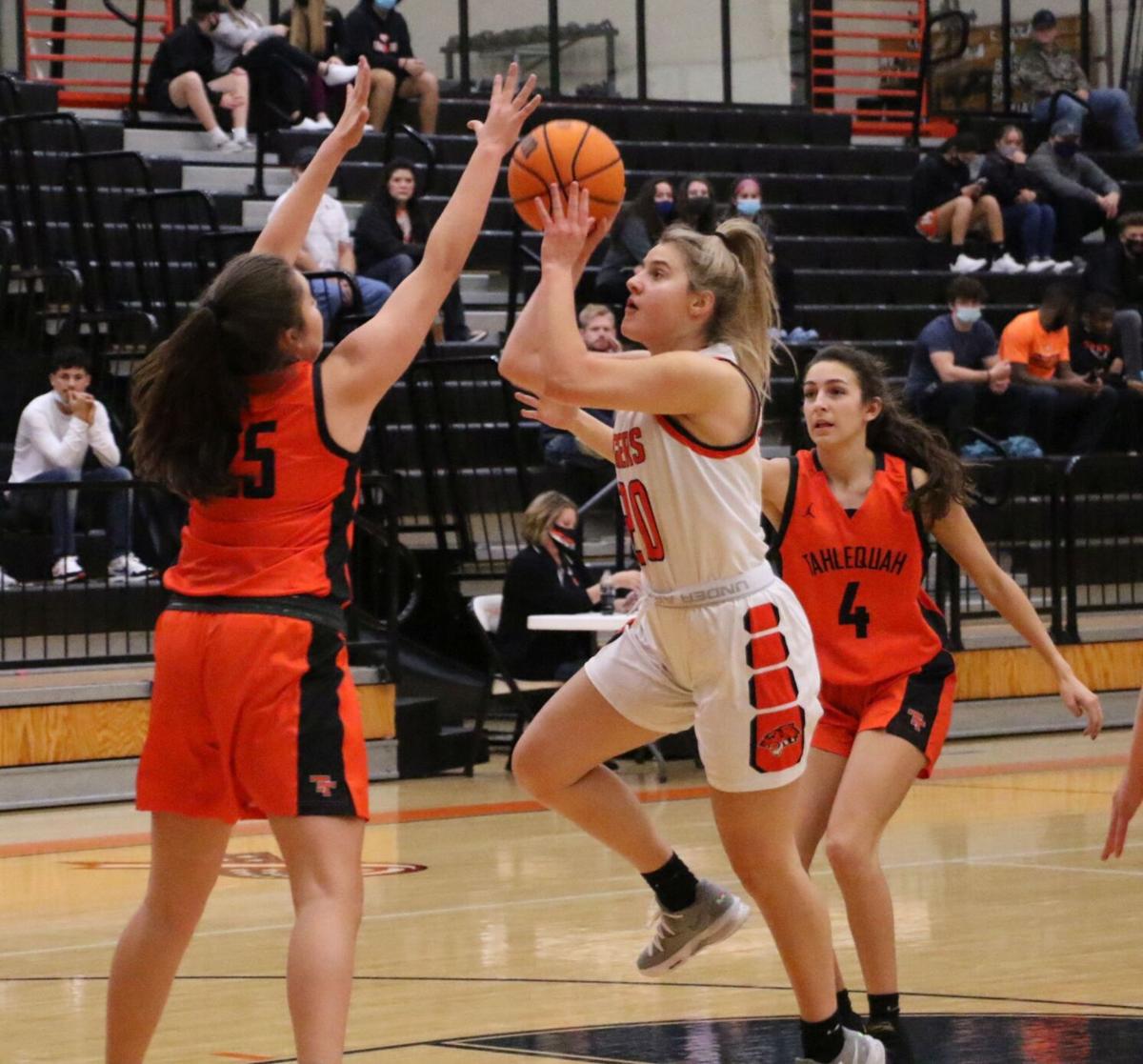 Nicki Ullrich drives to the basket in varsity action against Tahlequah on Jan. 5. Coweta lost the matchup 47-55. 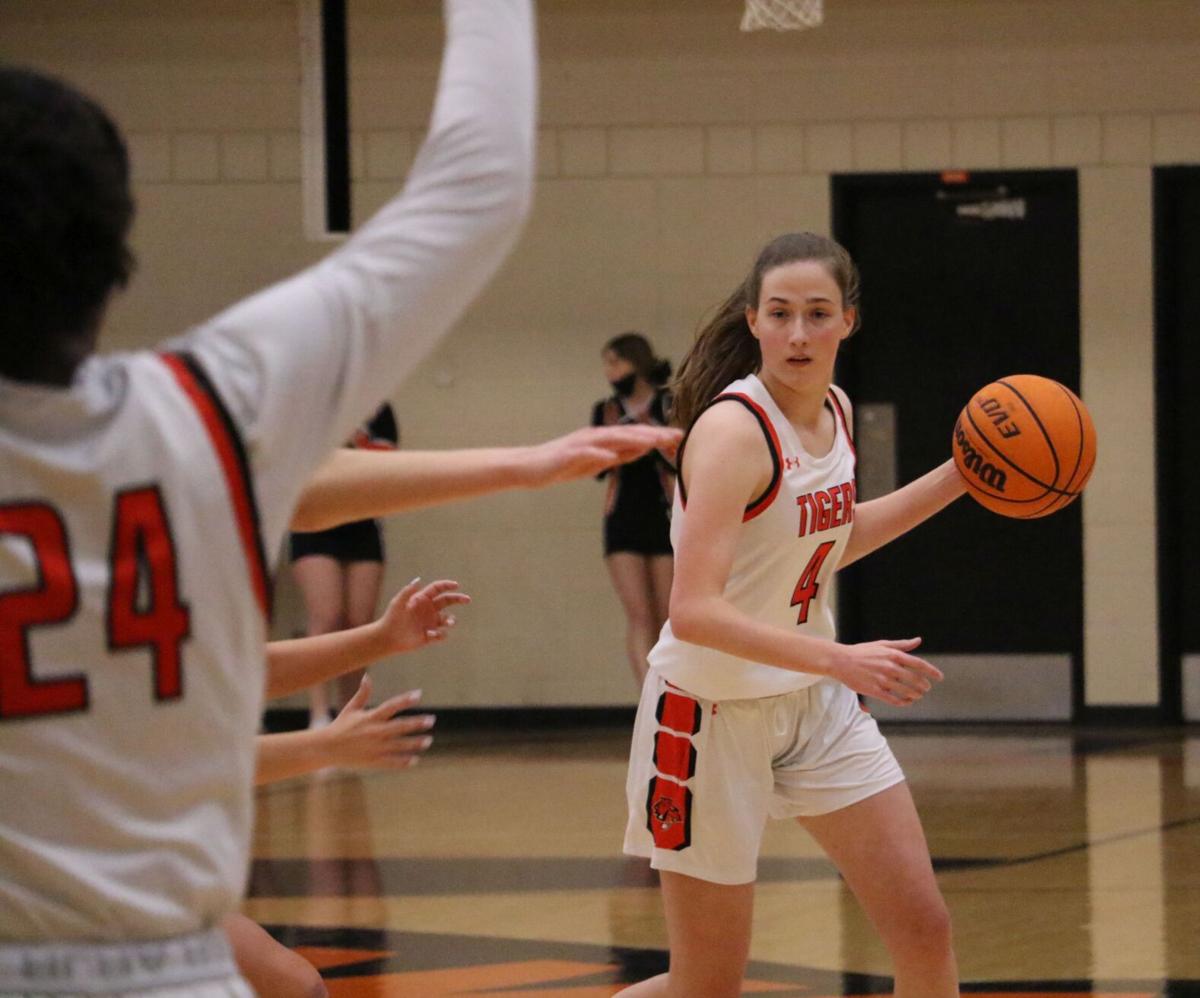 Senior Allyson Mercer looks for an open teammate beneath the goal in Coweta’s game with Tahlequah on Jan. 5.

“We definitely had a tough week, but had a ton of growth this week. The girls fought very hard in every game,” Coach Jade Allison said. “We hope to come into this week building on the improvements we made last week.”

The battle of Lady Tiger teams on Tuesday was a seesaw game in the first quarter. Tahlequah had a narrow one-point lead after the first quarter of play before stretching the lead to 10 points at the half, leading Coweta 28-18.

Coweta scored 13 points in the third period to Tahlequah’s 11 and found themselves down by eight entering the final quarter, 31-39.

Both teams battled point for point in the fourth quarter, but it was not enough for Coweta to overtake the lead for a win.

Senior Alexxia Mercer led the team in scoring with 18 points, half of which came from beyond the three-point arch. Linda Brice chipped in 14 point of her own.

Others scoring include Allyson Mercer, 8; Moriah Reed, 5 and Nicki Ullrich, 2.

In the Hilldale game on Thursday, Rice was six of 16 from field goal range and eight of 11 from the charity stripe to lead the team with 20 points. Alexxia Mercer scored 13 points, Kyliee Addington scored seven and Sherri Mason and Moriah Reed scored two points apiece.

Stats are not yet available on the Fort Gibson game.

The Lady Tigers will be at Claremore this week on Tuesday and return home for a game with Collinsville on Friday when they will celebrate Senior Night festivities. On Saturday, the ladies will play at Glenpool.

Wrestling season is finally in full swing for the Wagoner Bulldogs. In recent action they finished second at the NEO Tournament, placed fifth …

Coweta Tiger wrestlers won their home opener with a 45-28 dual win over Fort Gibson on Thursday, Jan. 7. The evening included an overtime win,…

The Coweta boys’ basketball season is finally underway and the Tigers quickly made their presence known with a 3-1 run in action last week. Th…

The year 2020 will go down in history as anything but ordinary thanks to a global pandemic that affected much of the sports world. Nonetheless…

It’s been a long wait but the Wagoner wrestling season is finally underway. The Bulldogs hosted their own tournament Dec. 30 and recorded thei…

Linda Brice (24) goes up for two of her 14 points in Coweta’s home court matchup with Tahlequah on Tuesday, Jan. 5.

Nicki Ullrich drives to the basket in varsity action against Tahlequah on Jan. 5. Coweta lost the matchup 47-55.

Senior Allyson Mercer looks for an open teammate beneath the goal in Coweta’s game with Tahlequah on Jan. 5.