Jim Hinds Sanitation East, INC. has been the main trash provider in Wagoner for 35 years. 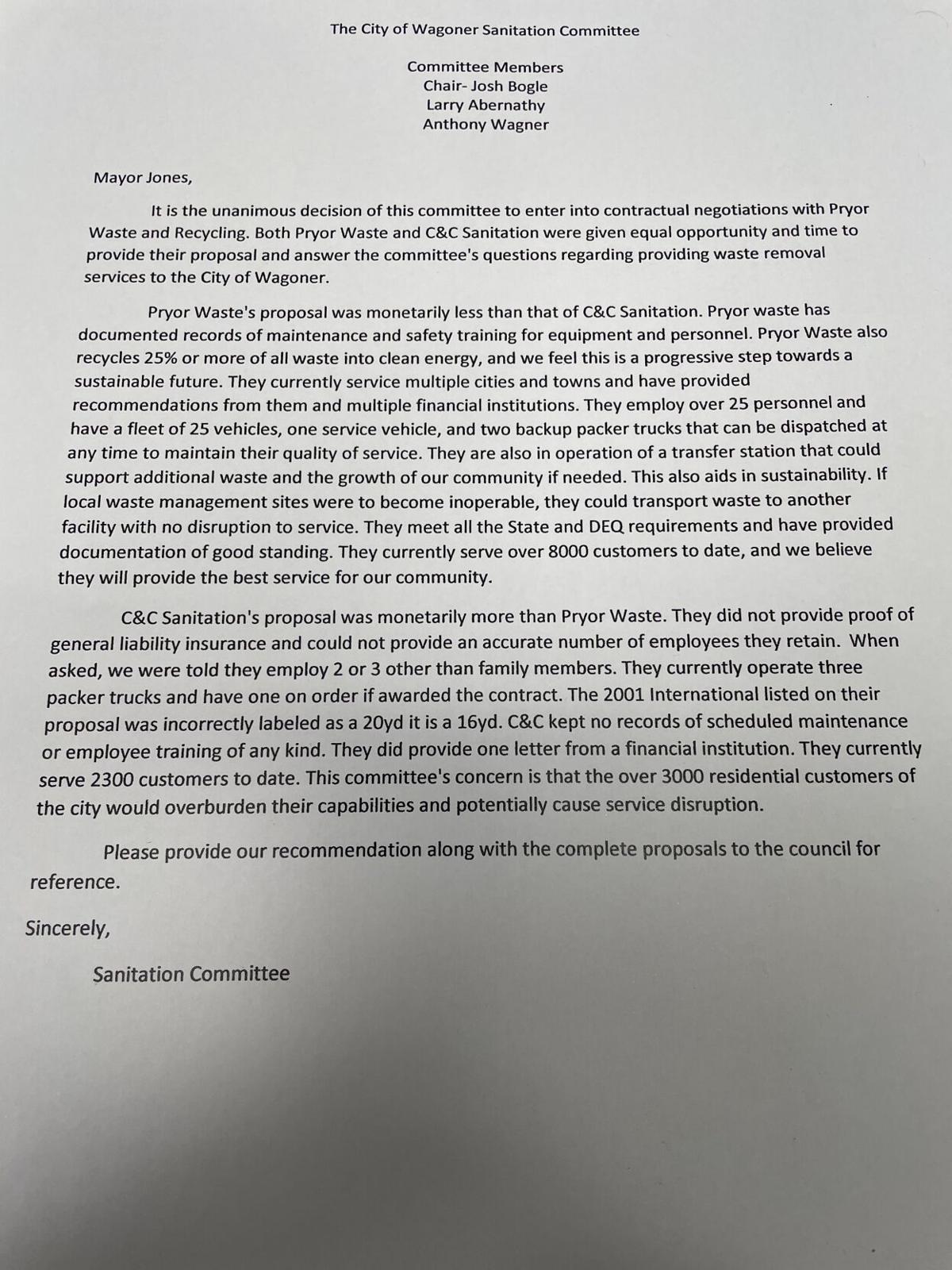 It came down to two businesses, Pryor Waste & Recycling, based in Pryor, or C&C Sanitation, in Wagoner, and city councilors voted to enter into a trash contract with Pryor Waste and Recycling.

The decision to enter into a Pryor Waste & Recycling contract was voted ‘yes’ by all city councilors at the regular Wagoner City Council meeting on Oct. 4., except Gayla Wright, Ward 2, who voted ‘no’ and Patrick Sampson, Ward 1, who abstained.

This comes after Jim Hinds, president of Jim Hinds Sanitation East, INC., opted to cancel his Wagoner trash agreement within 90 days of a written letter submitted to the Wagoner Public Works Authority on Aug. 6, 2021. Hinds’ company has hauled the trash in Wagoner for 35 years.

The Wagoner County American-Tribune obtained the letter Hinds wrote to the Wagoner Public Works Authority. It stated in part, “Under the terms of the Solid Waste Disposal Agreement, paragraph 17 on page 7, the last sentence of paragraph reads, ‘this agreement may be cancelled by either party upon ninety days written notice to the non-cancelling party.’ This contract has changed in the last three or four years in spite of my protests about the changes.”

“I’m getting older and don’t have enough time to dedicate to it that I thought was adequate,” said 81-year-old Hinds. He continues to haul trash for 120,000 residential homes in Tulsa with 120 employees, and recently just bought a landfill east of U.S. 75 and 56th Street North. Hinds is also on dialysis three times a week, five hours a day.

‘It takes away a lot of my management time,” Hinds said.

Hinds’ letter further stated, “I am hereby giving you my ninety-day notice of cancelling this agreement effective ninety days from the date of this notice. I will begin moving my equipment (roll-out carts and commercial containers) from the city of Wagoner on Nov. 6, 2021.”

But that wasn’t the only reason why Hinds backed out. He said Wagoner City Attorney Ken Hicks, of Hicks & Johnson Pc, allowed C&C Sanitation to set up trash containers at select commercial establishments in city limits while he had the full sanitation contract — commercial, residential and industrial.

“As far as I’m concerned, the city of Wagoner was in a breach of contract,” Hinds said. “I’m not the kind of person that goes around suing people, but I would have probably won. I was tired of that, for one thing.”

The Wagoner County American Tribune reached out to Hicks, and he there was no language in Hinds’ contract that made it exclusive.

“Jim and I have had this discussion years ago. I told him I never considered picking up the commercial trash to be exclusive. He’s known this for years,” Hicks said.

Bids for the Wagoner contract were received by C&C Sanitation, INC. and Pryor Waste & Recycling, LLC.

For residential services, Pryor Waste proposed $12.50 for a one 96-gallon roll out poly cart for each home within Wagoner city limits. If an additional 96-gallon cart is needed or required for residents that have more than 96 gallons of household refuse a week, an additional 96 gallon poly cart per home would be an extra $5 per month. It is a once-a-week service.

C&C proposed $14 for a one 96-gallon roll out poly cart for each home within Wagoner city limits. An additional 96 gallon cart would be $7 per month. It would have also been a once-a-week service.

Jim Hinds Sanitation, LLC. will officially end services in Wagoner on Nov. 6, upon receipt of his 90-day cancelation notice on Aug. 6. There will be a contract in place before Nov. 6., Jones said.

“Pryor Waste’s proposal was monetarily less than that of C&C Sanitation,” the letter said in part.

The letter further stated, “Pryor Waste has documented records of maintenance and safety training for equipment and personnel. Pryor Waste also recycles 25 percent or more of all waste into clean energy, and we feel this is a progressive step towards a sustainable future.”

Pryor Waste and Recycling currently services the cities of Pryor, Adair, Chouteau, Locust Grove, Salina and Sportsmen Acres, most of which since June 2011, according to their records submitted to the committee. They also have a Solid Waste Transfer Station, in Pryor, where the public can dispose bulky or additional household waste, if applicable. Additionally, the committee looked at the transfer station as a selling point that could “support additional waste with the growth in the community,” if needed.

The committee further stated in the letter that C&C Sanitation did not provide enough adequate information pertaining to their company. “C&C kept no records of scheduled maintenance or employee training of any kind. They did provide one letter from a financial institution,” the recommendation letter stated.

C &C Sanitation has been in business since 2006, according to their records submitted to the sanitation committee. They’ve serviced select rural areas in Wagoner and Muskogee counties, including Mazie, Okay and Hulbert. They have approximately 2300 customers, they wrote.

The recommendation letter further stated, “This committee’s concern is that over 3000 residential customers of the city would overburden their capabilities and potentially cause service disruption.”

Hinds said he believes the sanitation committee made the right choice.

“It was a smart move on their part,” Hinds said on Oct. 8, 2021. “They have the financial backing. They have the wherewithal to care of it like I did, or better probably.”

The Wagoner County American-Tribune reached out to C&C Sanitation for comment, but did not hear back.

C&C Sanitation did create a public Facebook post on Oct. 4 saying in part, “For a city that thrives because of the local businesses here, it’s a darn shame that we weren’t even a remote possibility in the minds of our city administration to take on the city contract. We know they’ve been meeting with the other sanitation company for at least a year. At least a year the mayor has known about this. The same mayor that when elected to office looked Bobby Call (owner) in the face and said if the services ever come up for bid, I’ll make sure to fight for our local company. He’s done everything but fight for us.”

But Mayor Jones said that statement is simply — false.

“Bobby told me several years ago that if we ever bid our trash service that he would like the opportunity to put in a proposal, so have several other trash contractors,” Jones said. “I have only been aware of the Hinds situation for four or five months, when I first brought it to the City Council in July. The decision on who to use for trash service belongs to the council and who they believe is best for the citizens. I don’t vote unless there is a tie and the vote was 6-2.”

A sanitation contract is currently being formed with Pryor Waste & Recycling for the city of Wagoner. The finished contract will need to be approved at a later city council or special meeting.

After a nearly two and a half hour public hearing with city councilors, the city attorney, and all emergency services supervisors, Wagoner EMS Director Jim Roberts’ disciplinary action — suspension from his duties for three days without pay — was rescinded.

SCAM ALERT: Some Wagoner County residents are getting calls saying they will be arrested for not going to jury duty.

“All this development (in Wagoner) with increased runoff is flooding people all over the place." -Bill Smith, Wagoner Flood Plain Administrator

Down in the woods of Coweta, Okla., zombies are hungry. They need to be removed as soon as possible. ‘Zombie Rampage Ok’ is helping combat this emergency situation.

Picking up the pieces: Coweta recovers from EF-1 tornado

Coweta rebounded from the EF-1 tornado, thanks to quick action by first responders, restoration crews and numerous volunteers - including student-athletes, coaches and FFA members. It was the ultimate showing of the Oklahoma Standard.

Dozens of Wagoner County veterans killed in action will be honored in November at the Wagoner County Courthouse, thanks to over a years’ worth of research and dedication by Wagoner City Library employees.

Additional fees coming to pay back GRDA after February storm

Starting Nov. 1, all Wagoner residents will pay approximately $1.25 per month over the course of 10 years to pay back GRDA for the extreme power costs associated with the February winter storm.

Jim Hinds Sanitation East, INC. has been the main trash provider in Wagoner for 35 years.