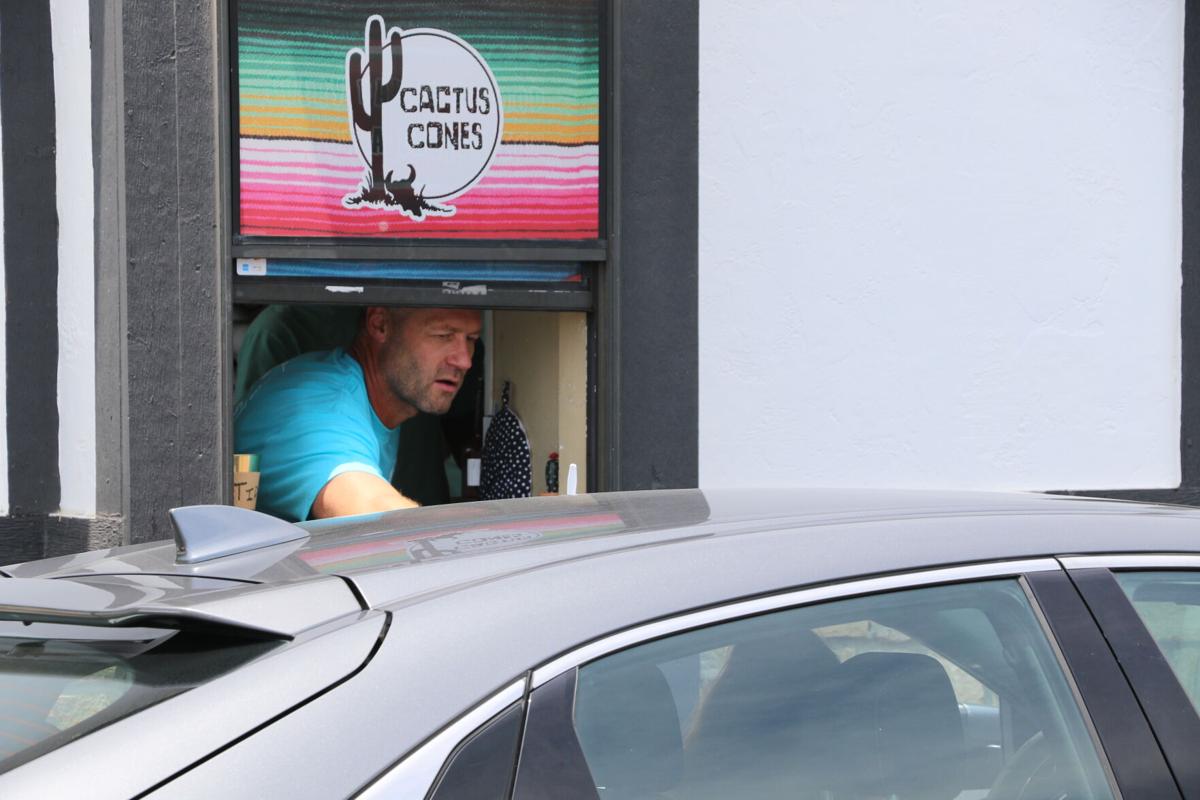 ‘Sticks’ works the booth at Cactus Cones in Coweta to raise money for his non-profit, STICKS Cares. 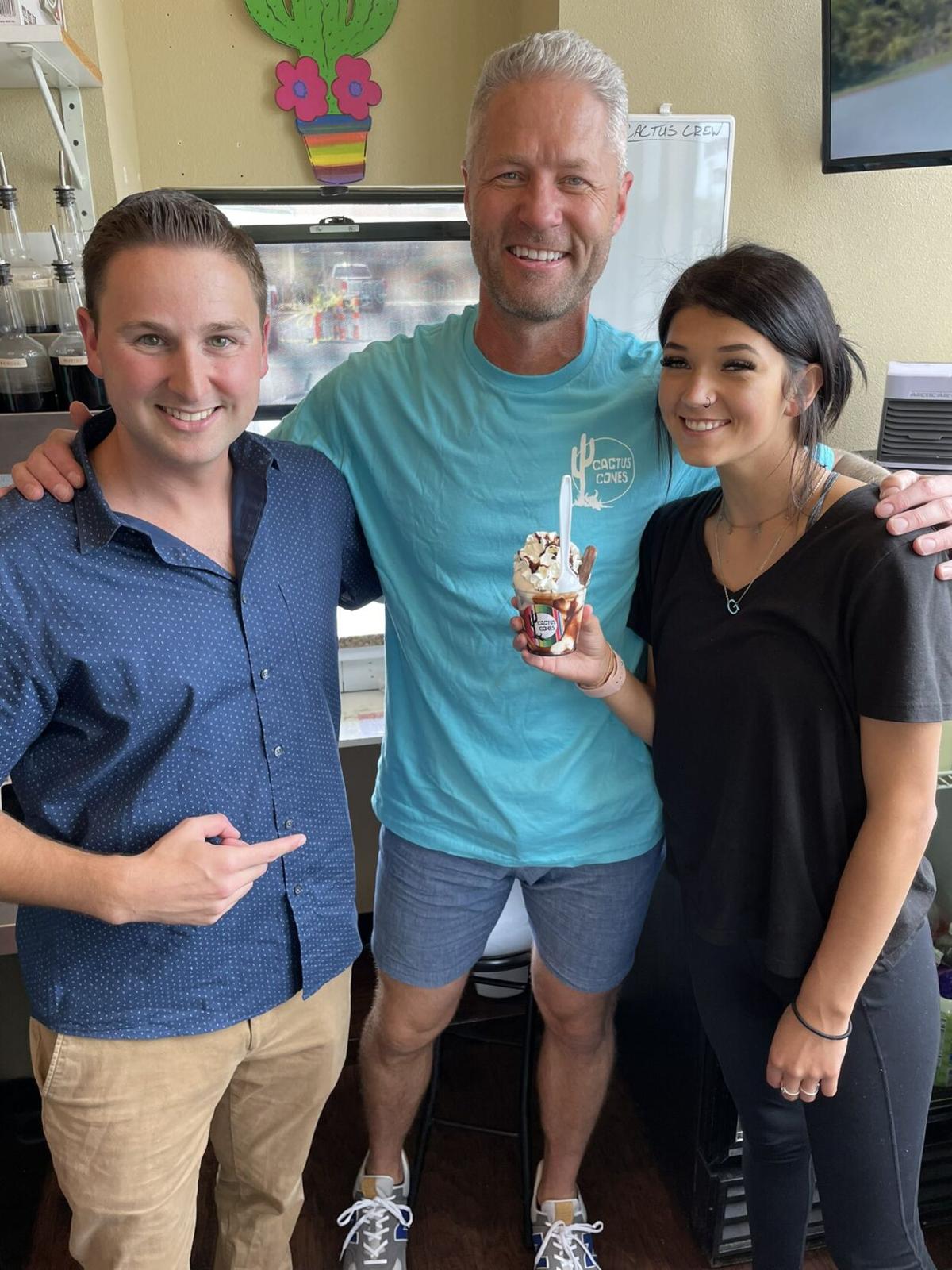 Sean “Sticks” Larkin is no stranger to Coweta.

The A&E Live PD co-host and 23-year Tulsa Police veteran raised his two kids in Coweta. They all went to Coweta High School. In fact, it’s not uncommon to see Sticks at a Friday night Coweta football game occasionally.

It’s a no-brainer why he picked Cactus Cones, off highway 51 in Coweta, to raise money for his nonprofit, STICKS Cares. All sales and tips from his visit working the booth, July 14 from 1-3 p.m., went to the charity. Over $700 was raised.

Cars stretched throughout the plaza parking lot and almost to the road. Excited visitors wanted to get a cactus cone or pineapple whip handed to them by Sticks himself – and the occasional selfie, of course.

“Through my kids being here and just knowing everybody, we connected with Cactus Cones,” Larkin said as he was handing a smiling fan a Dole pineapple and coconut whip.

Cactus Cones knows or thing or two about giving back. Last month, owner Candy Ginn raised enough funds, with the help from customers, to load up three carts worth of grocery items and donate it to the Coweta food bank. In total, it was over 600 items –their biggest food drive yet. It’s something she likes to do any chance she gets.

Ginn’s typical motto: “If I’m blessed, I will do whatever it takes so I can bless others.”

In fact, Larkin and Ginn met about two months ago at another charity event. They share the same passion for helping others.

Larkin started STICKS Cares last year. The non – profit is focused on serving inner – city kids in Oklahoma and around the country. One of its long – term goals is encouraging and educating kids to become EMT’s, firefighters or police officers.

Larkin knows the first responder field, especially law enforcement, has taken a hit in recent months. He encourages everyone, not just kids, to realize changes occur all the time.

“We need good men and women to be police officers right now probably more than ever,” he said. “The profession has changed but just like everything else in the world that’s changed in the past, two decades.”

Sticks Cares also helps groups, organizations and individual’s access money and other resources thorough grants and donations. In addition, STICKS Cares helps groups establish and utilize written material(s) used to serve communities; and as it grows, partner (with other non-profits) and match with other donors and donations working to serve a similar purpose.

Larkin said he’s “been busy” since turning in the badge in May.

He just had a book published June 15 called, “Breaking Blue: Real Life Stories of Cops Falsely Accused.” It’s kept him on and off a plane doing radio TV shows across the country discussing the current status of policing. In fact, right from Cactus Cones he was heading to New York City to do another show.

Sticks is a big, bourbon guy.

“I collect bourbon – so we all just sit down with a different drink and talk,” he said.

The episodes are weekly. Larkin and Doss sat down with Mike “The Cop” in the July 15 episode and discussed policing, some of their most interesting arrests, retirement and LIVE PD.

Retirement or not, it’s more than clear: Sticks is very passionate about law enforcement.

“It’s a fantastic profession. I’m proud to be a part of it. It’s a very gratifying, fulfilling job,” Larkin said.

It’s official: Ron’s Hamburgers and Chili is slated to come to Wagoner September 2021, according to company President, Mark Baber.

Wagoner Mayor Albert (AJ) Jones said it’s been anything but easy trying to rally the community around preserving the 125-year-old, Katy Depot in downtown Wagoner. The biggest issue: some folks don’t want to pay for it.

Janet Heller, 61 is dubbed as Coweta’s famous, rural mail carrier — and she officially retired from the post office, July 30. The post office even gave her an award for driving a million miles.

Various railroad crossings to be closed in Coweta

Union Pacific Railroad has notified the City of Coweta that their chosen contractor will be closing down RR crossings in Coweta for at least 24 hours to replace railroad ties, the city said.

Wagoner Community Hospital is one of 44 hospitals and hospital specialty units in Oklahoma to meet a challenge from the Oklahoma Hospital Association to achieve a healthcare worker influenza vaccination of 96% or higher during the 2021-2021 flu season.

After nearly six years of planning, applications, appraisals and the occasional setback, the city of Wagoner finally got the thumbs up for three, ODOT projects to be bid together.

Coweta voters will have the opportunity to cast ballots for the One for Coweta campaign, Sept. 14, 2021. If passed, it would be a one cent, permanent increase in the cities sales tax to support capital projects.

Wyatt Huggins, of Boy Scout Troop 637, is one step closer to becoming an Eagle Scout after completing a walkway for the Lincoln Enrichment Center.

“I just wanted to do something good for the community. We had several people ask for a Saturday market and that’s what we did," said Wagoner Farmers Market Director, Carol Jones.

‘Sticks’ works the booth at Cactus Cones in Coweta to raise money for his non-profit, STICKS Cares.