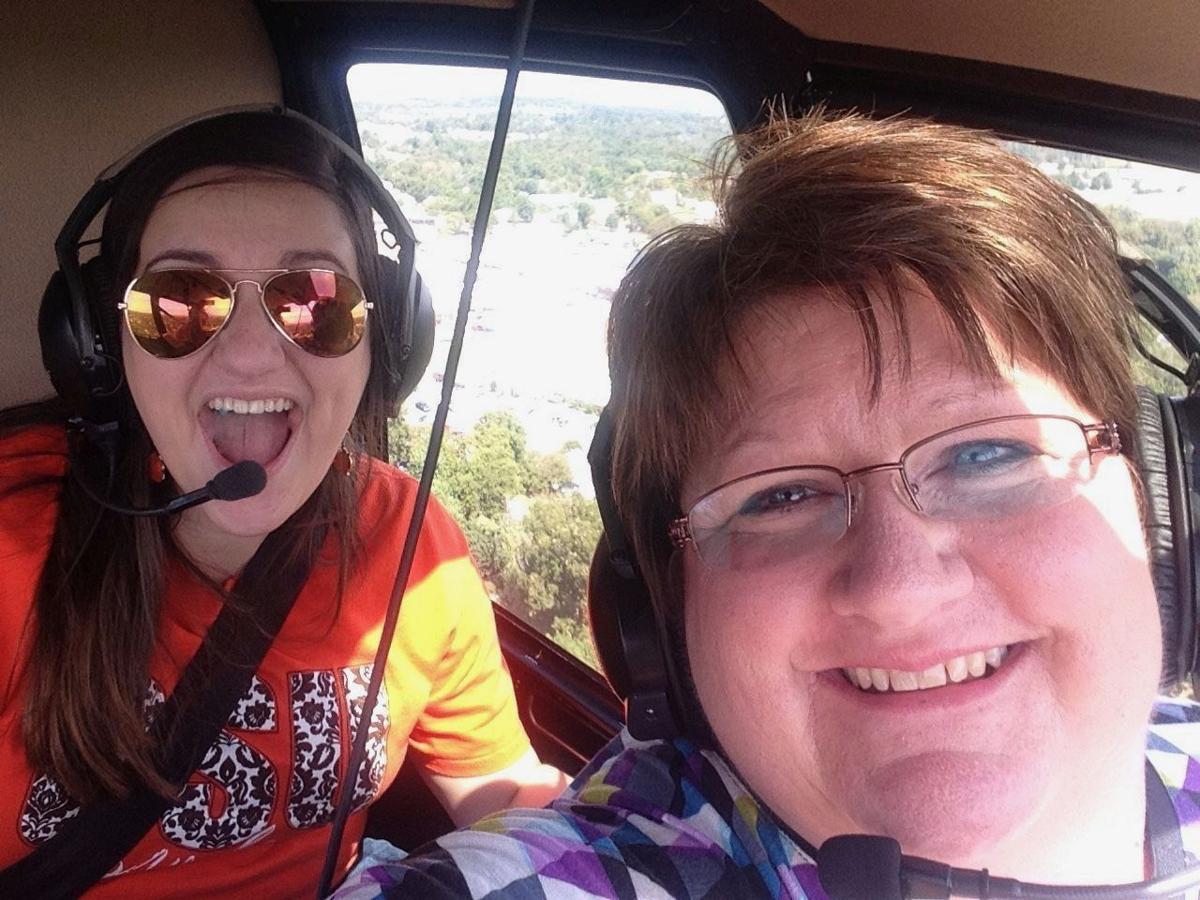 One of my favorite photos ever is from 2015 when I was joined by my daughter, Victoria, for a helicopter ride over Coweta during Fall Festival. Dustin Stone, who works for News on 6, took us up in his private helicopter so I could take photos of school construction projects from the air. 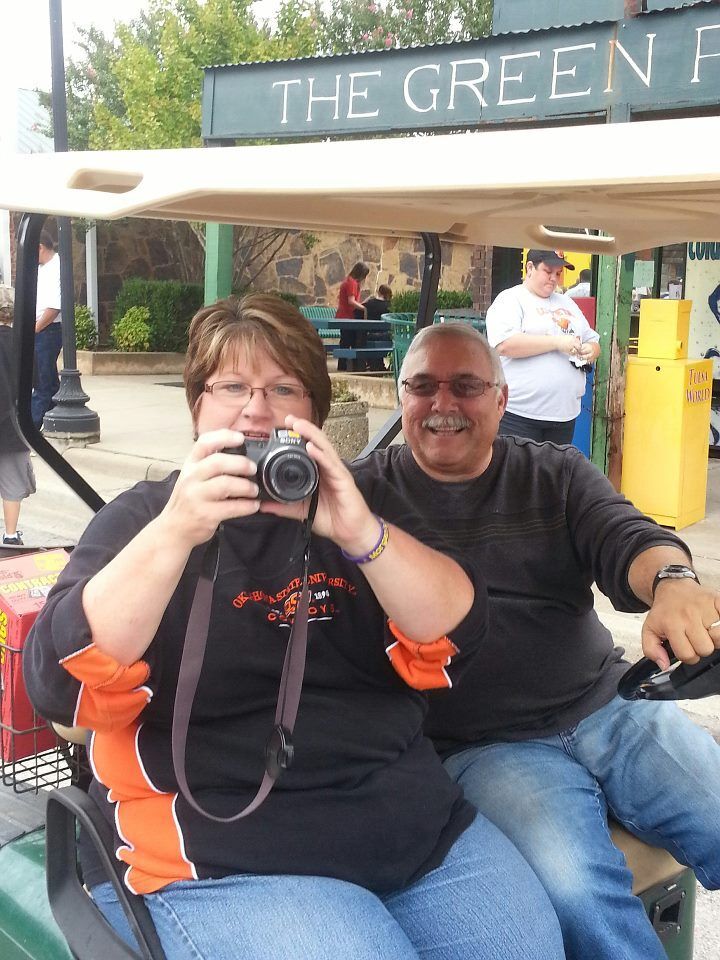 Adjutant Danny Oliver with the Wagoner County Disabled American Veterans Chapter 88 escorted me through the Fall Festival midway via golf cart one year to shoot video for our newspaper website and social media pages. 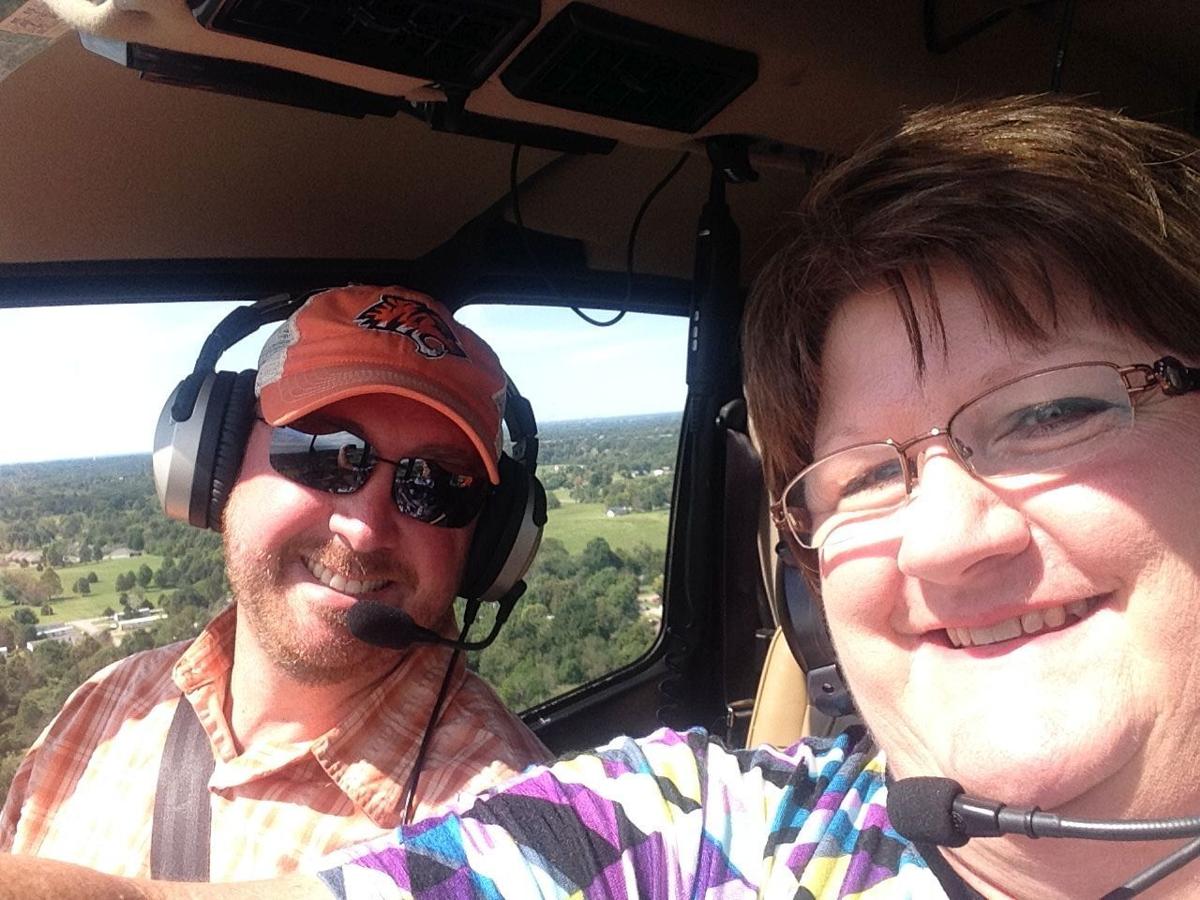 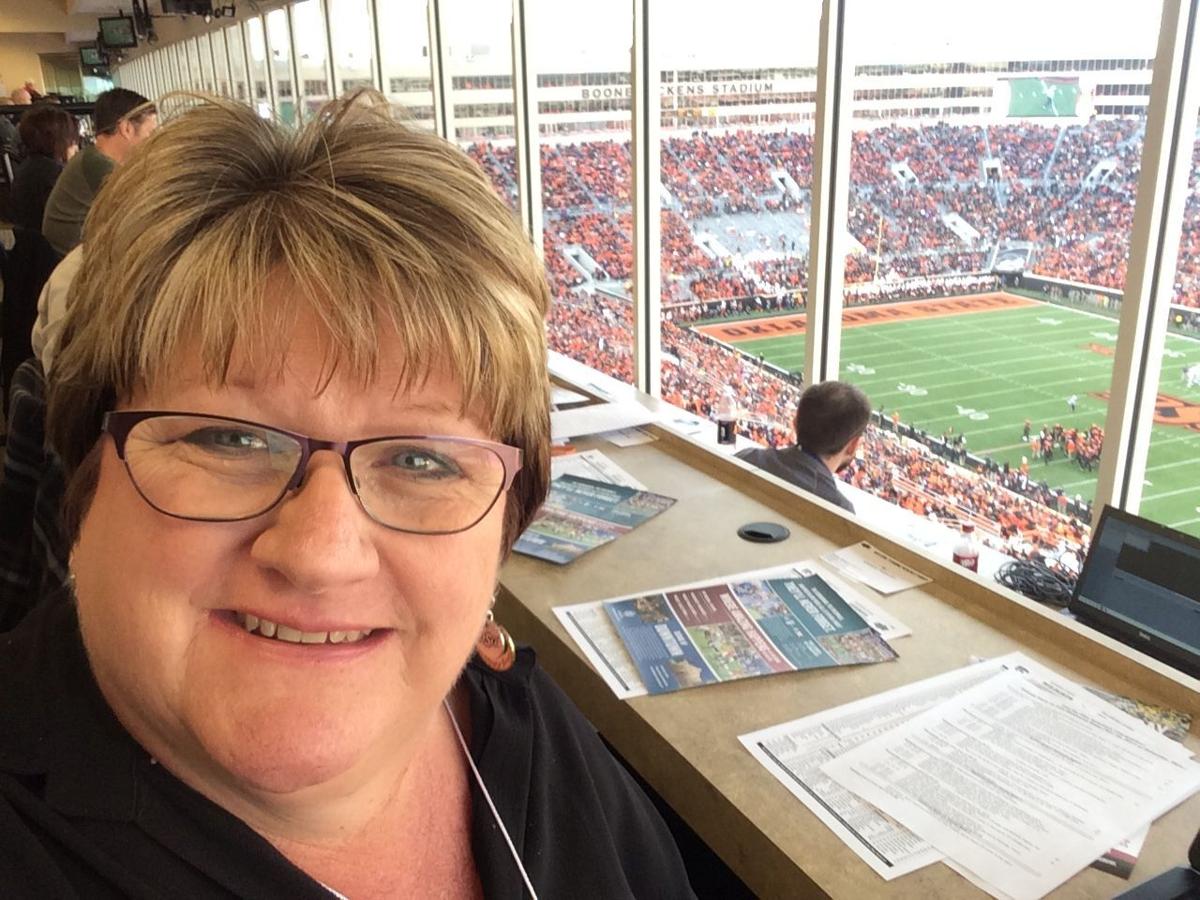 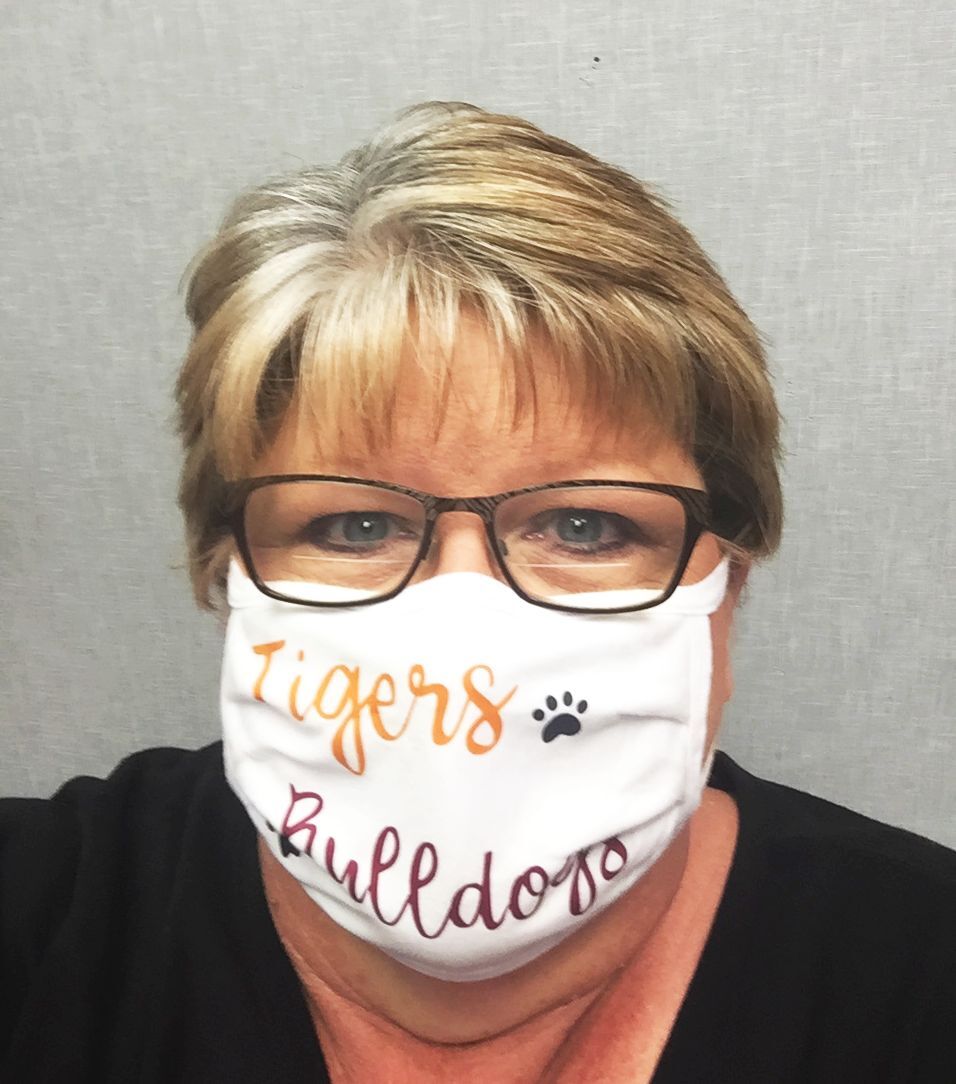 For 2020 "Game Day" between the Wagoner Bulldogs and Coweta Tigers, Wagoner Chamber Director Kristen Mallett made this cool face mask for me to wear on the sidelines so the news editor could support both teams.

Please indulge me if you will as I move my Observation Point column from the Viewpoints page to the front cover this week. It is, after all, the last personal column I will be writing as news editor of the Wagoner County American-Tribune.

This Friday, Jan. 15, will be my last day at the news desk after 33 years. To put that in perspective, that’s 1,710 weeks and 6 days. During that time, we’ve published 1,711 weekly editions and countless special editions.

It’s been a long ride!

I am trading in my 24-hours a day, 7-days a week community journalism responsibilities for a new and exciting assignment. On Monday, Jan. 25, I will begin serving the Coweta business community as executive director of the Coweta Chamber of Commerce.

I am so blessed for this opportunity to focus on the public relations side of my education and experience in the community where my professional career truly started. I promise I will give it my all, just as I have with the newspaper for so many years.

My first day on the job at the Coweta American was April 4, 1988. In the years since that time, I’ve been blessed to work in Coweta, Wagoner, Porter and occasionally Okay—communities filled with an abundance of story and photo opportunities.

There has been good news and bad, breaking news and features, celebrations and commemorations, historic news and the occasional tragedy. Together we have experienced it all and it’s been well documented in the pages of the hometown newspaper.

To this day, memories remain seared in my mind of the harsh news I’ve reported – fatal car crashes, murders, soldiers killed in battle and devastating fires.

Then there are the joys of life such as people turning 100 years old, surviving tragedies to become role models or dedicating their lives to serving others.

When the American merged with the Wagoner Tribune in 2016, the union had its rough moments, but we made it work. Our history of having award-winning publications in both communities continued and we flourished under the American-Tribune name.

My dear friend and colleague, the late Liz McMahan, was always one of my biggest supporters. Oh, how I miss that woman who set the standard for great community journalism! Writing her obituary for the newspaper was one of the hardest things I’ve ever done.

Many times I’ve been asked what I love about my job and my answer never wavers – dealing with people, telling their stories and documenting events that become our communities’ history.

There are so many things I’ve covered for the paper that I will never ever forget. While there are too many to recall, here are a few that stand out:

I was at Tiger Field in Coweta when Lance Lane, a successful Special Olympics athlete with cerebral palsy, “walked” for the first time, making his way across the graduation stage to receive his diploma. My tears flowed as I captured it all on camera.

I was in Porter when fire destroyed the elementary school and when a peach cobbler weighing an incredible 2,902 pounds was baked in an outdoor oven and broke a long-standing world record.

Dozens of men and women who bravely served in the military shared their very personal stories with me for the newspaper. In doing so, we not only recorded their history, but made others keenly aware that freedom comes with a price.

These individuals and their families all hold very special places in my heart.

When fire ravaged several buildings in downtown Wagoner a few years ago, I saw an entire town come together to support those who lost everything.

In similar fashion, the #ChooseWagoner campaign epitomized true community spirit and it was all well documented in the newspaper.

In 2015, I was honored to serve as grand marshal of the 41st Annual Fall Festival Parade. My daughter Victoria, who has had to share me with the community her entire life, joined me during this special event in my career. Even now, she says she will always be known as the “newspaper lady’s daughter.”

A highlight of my career was a pair of helicopter rides through the skies of Coweta with Dustin Stone at the controls. While the first time was to get over my fear of heights, the second was to document progress on Coweta Schools’ multi-million dollar bond issue projects.

Dustin (News on 6) and I have worked side-by-side on occasion during our long media careers and I have been blessed for those opportunities. From news coverage of tornadoes and pipe bomb detonations to the time a motorist accidentally drove into the Roy’s Chicken restaurant, we have a long-standing friendship that I will always treasure.

What a joy it was for me to sit in the press box at Boone Pickens Stadium in Stillwater on two or three occasions to watch Wagoner’s own Malcolm Rodriguez make a name for himself with the Oklahoma State Cowboys. In 2019, I scored sideline press credentials for the first time – for the OU game no less!

Let me tell you, having that opportunity to cover bedlam from the sidelines was by far one of my favorite assignments ever at the paper!

Throughout this journey, I have had an amazing team of co-workers including staff writers, sports stringers and photographers, student photographers, advertising and media consultants, customer service representatives, layout and design folks, graphic artists, editors and pressmen who work diligently to help bring you the news in print and online each week. To all of you in those roles, I appreciate you more than you’ll ever know.

To everyone in Coweta, Wagoner, Porter and Okay, thank you for letting me be a part of your lives for the past 33 years. Your support and encouragement will forever be treasured. I won’t say goodbye, just see you later.

Please continue to support community journalism because we really have some great things going on right here in Wagoner County.

The online registration portal for the COVID-19 vaccine went live on Thursday, Jan. 7 and already countless Oklahomans are signing up to begin…

Her unborn baby did not survive, according to the Oklahoma Highway Patrol report. The other driver was treated and released at a local hospital.

The legacy of Martin Luther King, Jr. will be commemorated Jan. 15-18 as a number of celebrations are planned in the Wagoner community.

Absentee ballot requirements go back to "normal" for 2021

A temporary absentee ballot verification option that was put in place by state legislators last year has expired.

Information in this column is obtained from public records at the Wagoner County Courthouse for the period ending Jan. 14, 2021.

One of my favorite photos ever is from 2015 when I was joined by my daughter, Victoria, for a helicopter ride over Coweta during Fall Festival. Dustin Stone, who works for News on 6, took us up in his private helicopter so I could take photos of school construction projects from the air.

Adjutant Danny Oliver with the Wagoner County Disabled American Veterans Chapter 88 escorted me through the Fall Festival midway via golf cart one year to shoot video for our newspaper website and social media pages.

For 2020 "Game Day" between the Wagoner Bulldogs and Coweta Tigers, Wagoner Chamber Director Kristen Mallett made this cool face mask for me to wear on the sidelines so the news editor could support both teams.