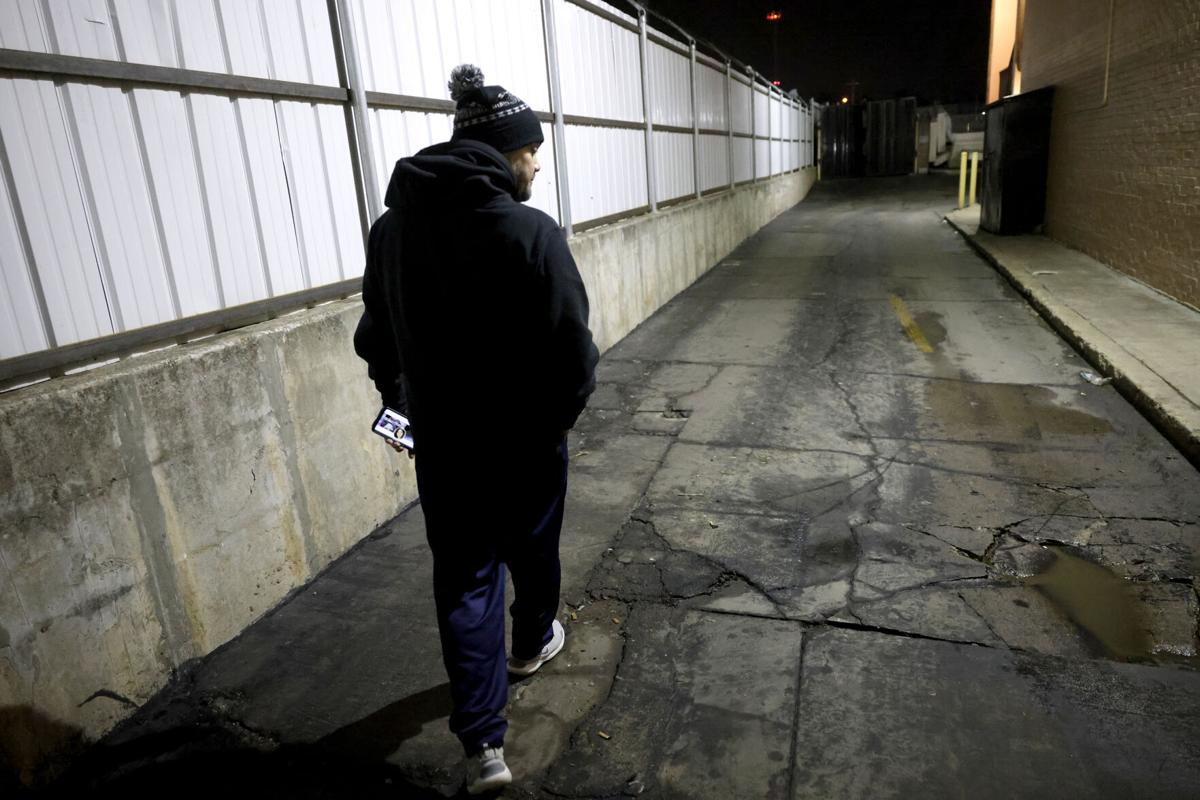 Nokusece Wind searches the streets and alleys of Tulsa for signs of his sister or people who may be holding her. Leandra Wind has been missing for more than five months. 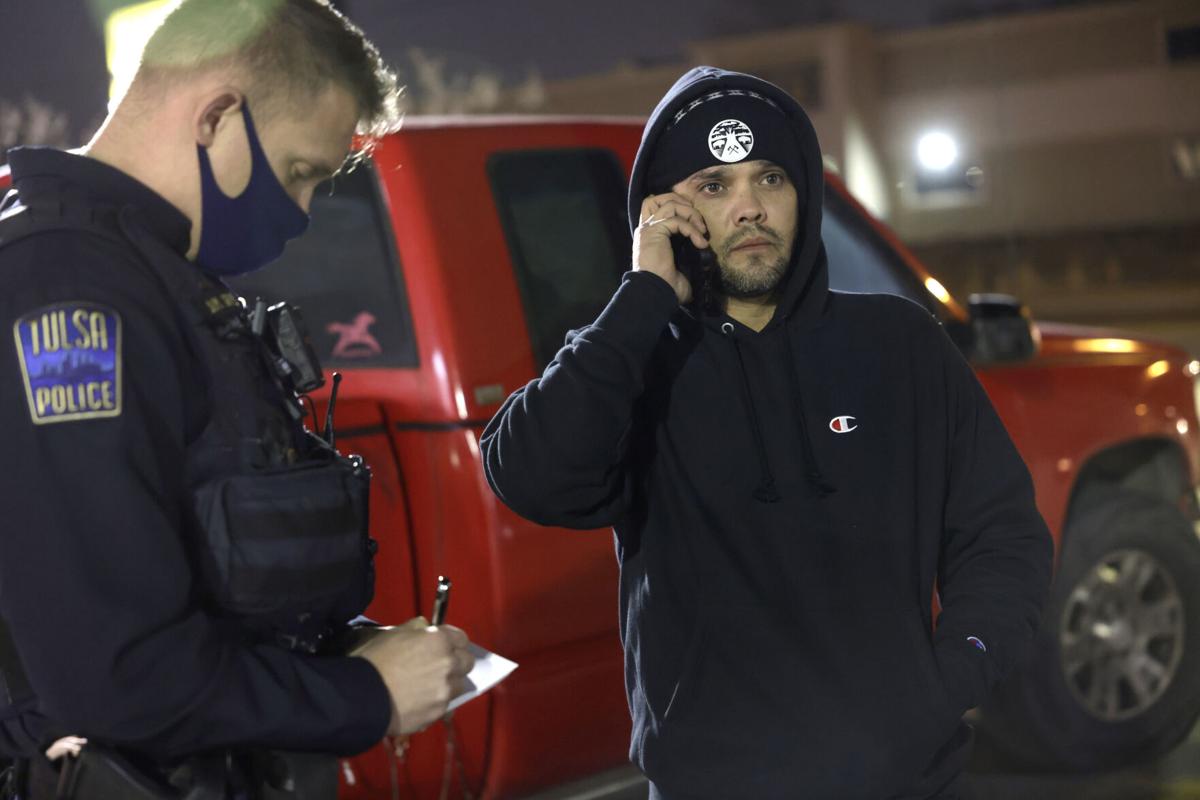 Nokusece Wind gets more information from his father on the phone as he meets with a Tulsa police officer and fills out a missing person report about his younger sister in February. 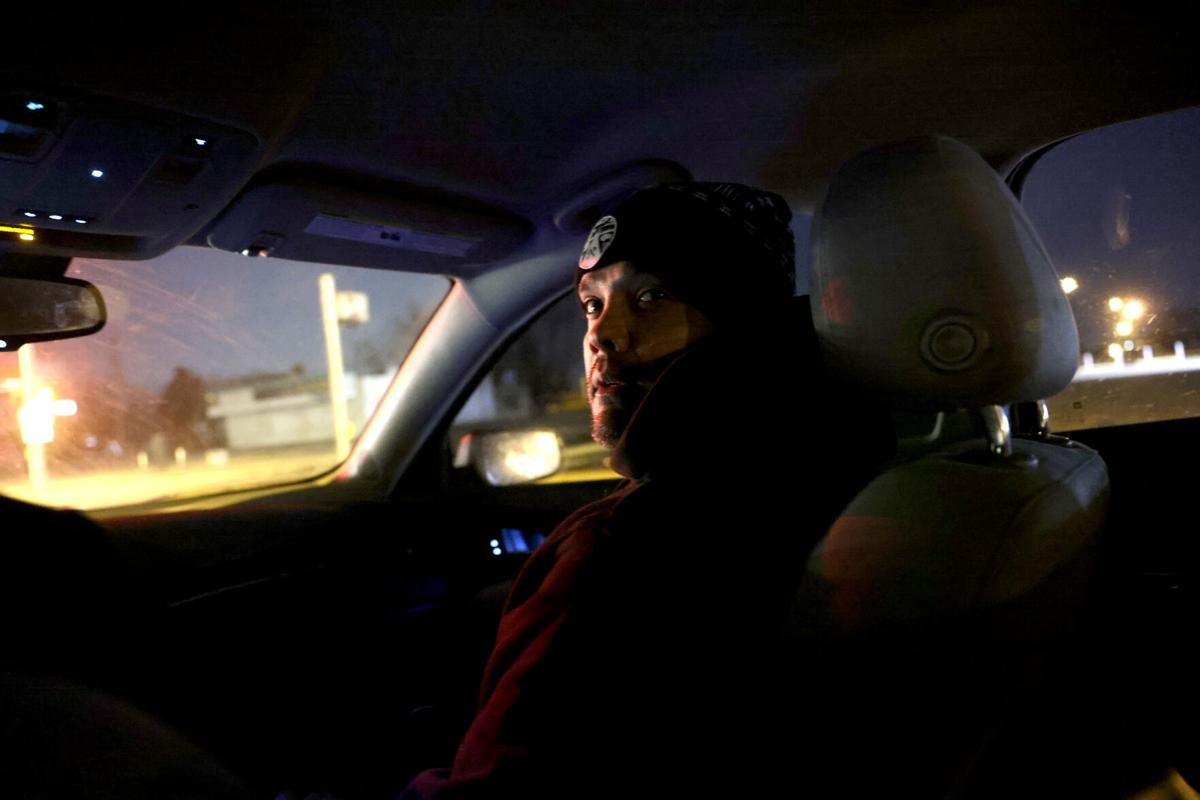 Nokusece Wind searches the streets of Tulsa weekly for signs of his sister, Leandra Wind. 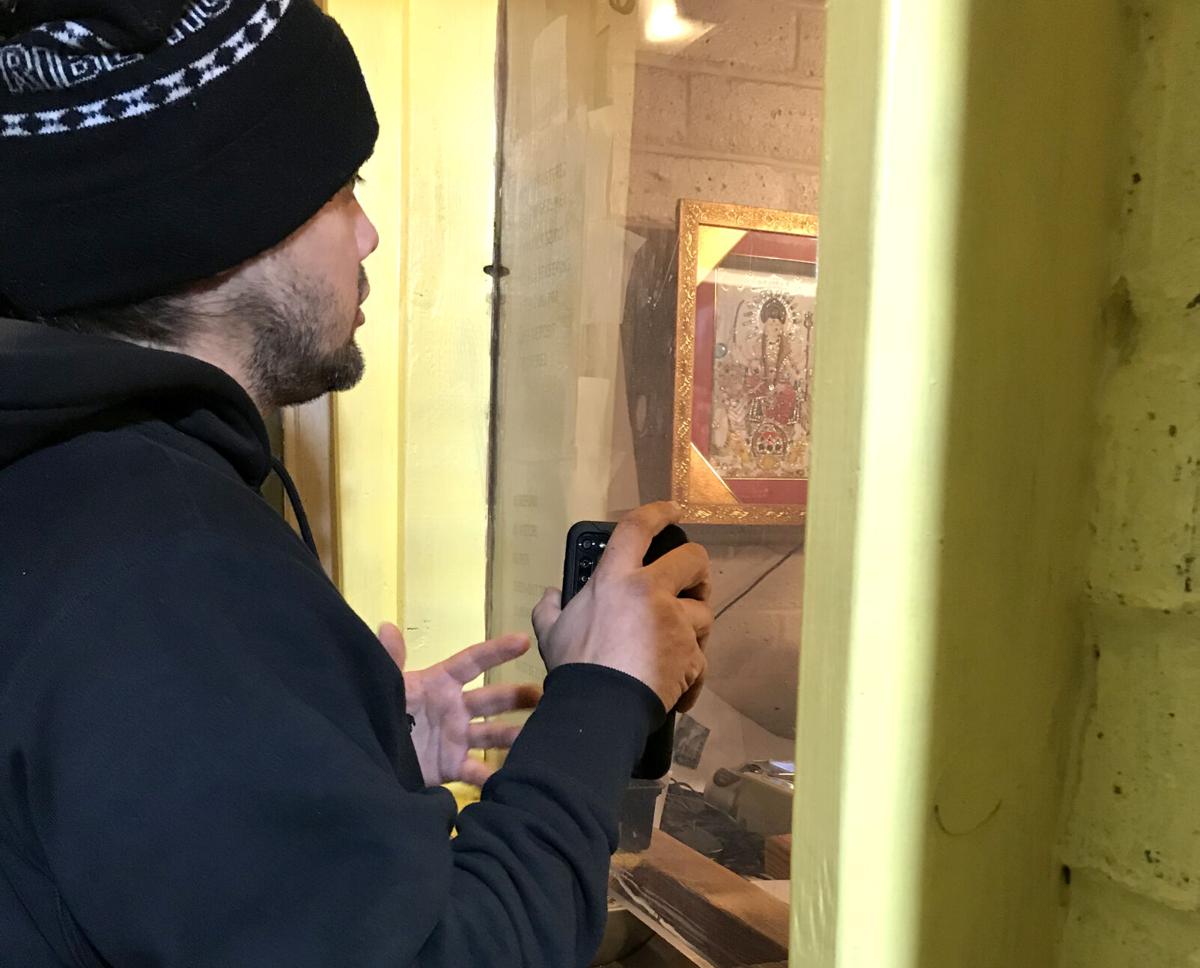 Nokusece Wind holds up a picture of his sister as he asks a Tulsa motel owner and staff members if they've seen her. 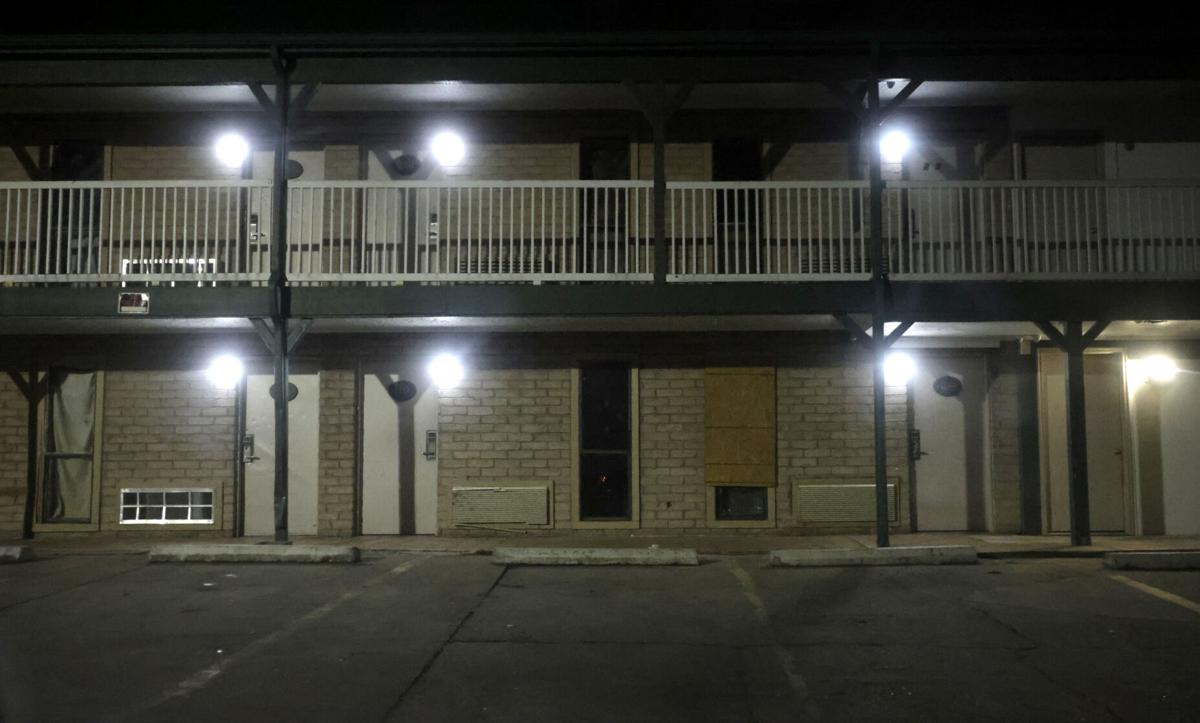 Nokusece Wind looks in the parking lots of motels like this one near Admiral Place and Sheridan Road for signs of his missing sister. 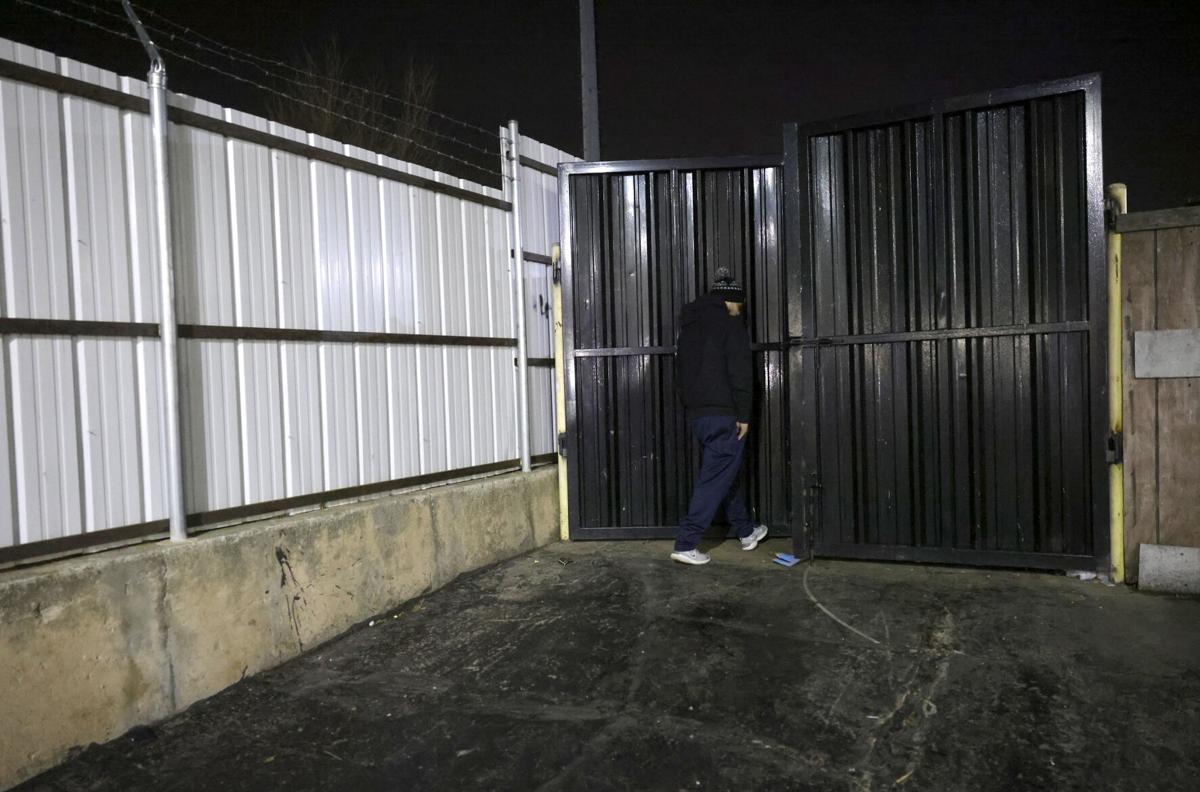 Nokusece Wind searches behind a dumpster at a Tulsa motel for people who may have seen his missing sister.

“Have you seen my sister?”

It never gets easier for Nokusece Wind, a Muscogee (Creek) citizen, to say these words. He’s had to say them more times than he can count.

Wind drives the streets of Tulsa weekly in search of his sister, Leandra Wind, who has been missing for more than five months. She is a victim in the international Missing and Murdered Indigenous People crisis.

Leandra Wind was last seen in Haskell, but it’s thought she is a victim of human trafficking, so Nokusece travels across Tulsa, searching Admiral Place motels, travel-stop convenience stores and homeless camps for a trace of his sister. His family even searches parts of Oklahoma City for her.

Even though Nokusece Wind is trained in search and rescue techniques, the searches take a toll on him.

“It gets to you, and it’s frustrating,” he said. “I don’t wish this upon anybody.”

But this isn’t the first time he has had to search for a sister. All three of his sisters have been taken before, and he regularly participates in searches for other Native American women.

For a long time, Indigenous people like Nokusece Wind and grassroots groups were the only advocates for the MMIW crisis, but over the past few years, the crisis has been given bigger and bigger platforms. Just this year, federal action and the Oklahoma Legislature have directed more funds and aid to combat the crisis and help victims.

Nokusece Wind’s oldest sister was a victim of domestic violence. Her ex-partner was convicted in Tulsa County of domestic assault after he ran over her leg with his car as she was trying to escape from him, court records state. She needed surgery to put two metal rods in her leg after the injury, her brother said.

He uses his first-hand experience and his search and rescue training to help find Indigenous people and bring them home. He acts as an on-the-ground advocate for families and victims, conducting searches, talking with law enforcement officers and spreading the word on social media.

“I do it for MMIW, but I’d do it for anyone,” Nokusece Wind said. “I don’t care how old you are, what race you are, what your religion is — I’m going to find you. That’s being human. It’s being Indigenous. Without advocates, they’re not going to get found.”

More than four of every five Native women and men in the U.S. have experienced violence, a 2016 National Institute for Justice study found, and the National Crime Information Center reported more than 10,000 missing Native Americans in 2019.

One of the issues in the MMIP crisis is possible underreporting of cases in Indian Country. Patti Buhl, Oklahoma’s MMIP coordinator for Oklahoma’s three U.S. Attorney’s Offices, said this could be a problem in Oklahoma and that the actual number of missing Native Americans could be much higher.

Buhl, a Cherokee citizen and former tribal police officer, is one of 11 MMIP coordinators across the U.S. who, as directed in 2019 by then-Attorney General William Barr, work with federal, tribal, state and local agencies to develop protocols and procedures for responding to missing and murdered Indigenous people.

One of Buhl’s primary focuses as Oklahoma’s MMIP coordinator is data collection.

“Having a full scope of what the problem is has been a big issue,” Buhl said. “A lot of different-date pieces out there all say different things.”

Buhl said it isn’t as simple as “underreporting,” though.

“I looked, and they had been entered as ‘white,’ and not American Indian/Alaska Native” Buhl said.

She said this is not to call out NamUs, but it is an example of records being entered incorrectly into databases or incorrect assumptions being made about a person’s heritage.

“This is just one example of probably hundreds that are incorrect,” she said.

But it’s not just a numbers problem.

Another form of genocide

Brenda Golden, a Muscogee (Creek) citizen and attorney in Okmulgee, said the Missing and Murdered Indigenous People crisis is another form of genocide.

“Women are the life givers,” she said. “If you cut off that form of life, it stops our tribes from growing. Our lineage. Our heritage. It not only cuts off our lives, but future generations.”

Golden has first-hand knowledge of the crisis affecting future generations, as her daughter was kidnapped and trafficked when she was 15 years old.

Her daughter was held against her will for six months before she was rescued in Amarillo, Texas. The man who was holding her left a phone in her room once, and she was able to call her mother.

Golden said if it wasn’t for that random act of the man forgetting a phone, who knows what could have happened.

“That’s what’s so worrisome about these missing people,” Golden said. “The uncertainty and not knowing. I went through six months of it, and it was hell. Some of these people have had missing relatives for years. I was one of the lucky ones.”

The pain surrounding missing or murdered Indigenous people is felt throughout their tight-knit communities, Golden said, and that pain lasts.

Her own pain from her daughter’s being taken pushed her into the MMIP movement. She began working with nonprofit organizations such as MMIW Indian Capital, the first such organization based in Oklahoma, as a legal consultant and to help form their charters and bylaws.

One such bill, Senate Bill 172, titled Ida’s Law, passed through the state House of Representatives on April 13.

Ida’s Law, authored by Rep. Collin Walke, D-Oklahoma City, and Sen. Paul Rosino, R-Oklahoma City, directs the Oklahoma State Bureau of Investigation to coordinate with the U.S. Attorney’s Office and the U.S. Department of Justice to receive funding to gather data and address the Missing and Murdered Indigenous People crisis. The bill also creates a liaison office under the OSBI.

Ida’s Law, named after Ida Beard, a Cheyenne and Arapaho citizen who has been missing since 2015, was signed into law by Gov. Kevin Stitt on April 20.

“This legislation is long overdue,” Walke said. “When you hear the stories of families missing their loved ones and you read the news articles about it happening across the country, it’s obvious there is a problem. This bill allows us to look at past and present data to determine the magnitude, and it also lays a foundation to be better prepared for cases in the future.”

The passing of this kind of bill has been a long process, but Golden said she is happy that the crisis is being addressed in the Legislature.

“I am thankful that the political officials have recognized the issue of MMIW and have taken steps to address it,” she said.

Golden said there is more work to be done. A bill that would have created the Kasey Alert, which she helped author, did not make it to the House floor and will not become law.

Buhl said that while her data collection work as MMIP coordinator is a big undertaking, progress is being made. The federal action that created her job, Operation Lady Justice, is a presidential task force meant to address Indigenous communities’ concerns about missing and murdered people within their communities.

“Conversations are happening that weren’t happening before,” Buhl said. “This crisis has gotten the attention of a lot of people. There are actual efforts being put forth at the local level, at the state level, at the federal level and at the grassroots level.”

Who are they? OK children reported missing as of April 23

These are recent reports of missing children made to local law enforcement. If you think you have seen a missing child, contact the National Center for Missing & Exploited Children at 1-800-THE-LOST (1-800-843-5678).

Coweta's own Dr. Kayse Shrum talks about her upcoming start as the president of OSU

Oneta Power is challenging its 2020 personal property tax assessment imposed by Wagoner County Assessor Sandy Hodges as well as the ability of state and local governments to tax the business at all because of a Supreme Court ruling in McGirt v Oklahoma.

Oklahoma drops to bottom half of U.S. for vaccination rates as health care leaders dissect reasons why

Oklahoma ranks No. 35 for percent of population fully vaccinated at 28.8%. The state is No. 38 with 38.1% of its population having received at least one dose.

Nokusece Wind searches the streets and alleys of Tulsa for signs of his sister or people who may be holding her. Leandra Wind has been missing for more than five months.

Nokusece Wind gets more information from his father on the phone as he meets with a Tulsa police officer and fills out a missing person report about his younger sister in February.

Nokusece Wind searches the streets of Tulsa weekly for signs of his sister, Leandra Wind.

Nokusece Wind holds up a picture of his sister as he asks a Tulsa motel owner and staff members if they've seen her.

Nokusece Wind looks in the parking lots of motels like this one near Admiral Place and Sheridan Road for signs of his missing sister.

Nokusece Wind searches behind a dumpster at a Tulsa motel for people who may have seen his missing sister.