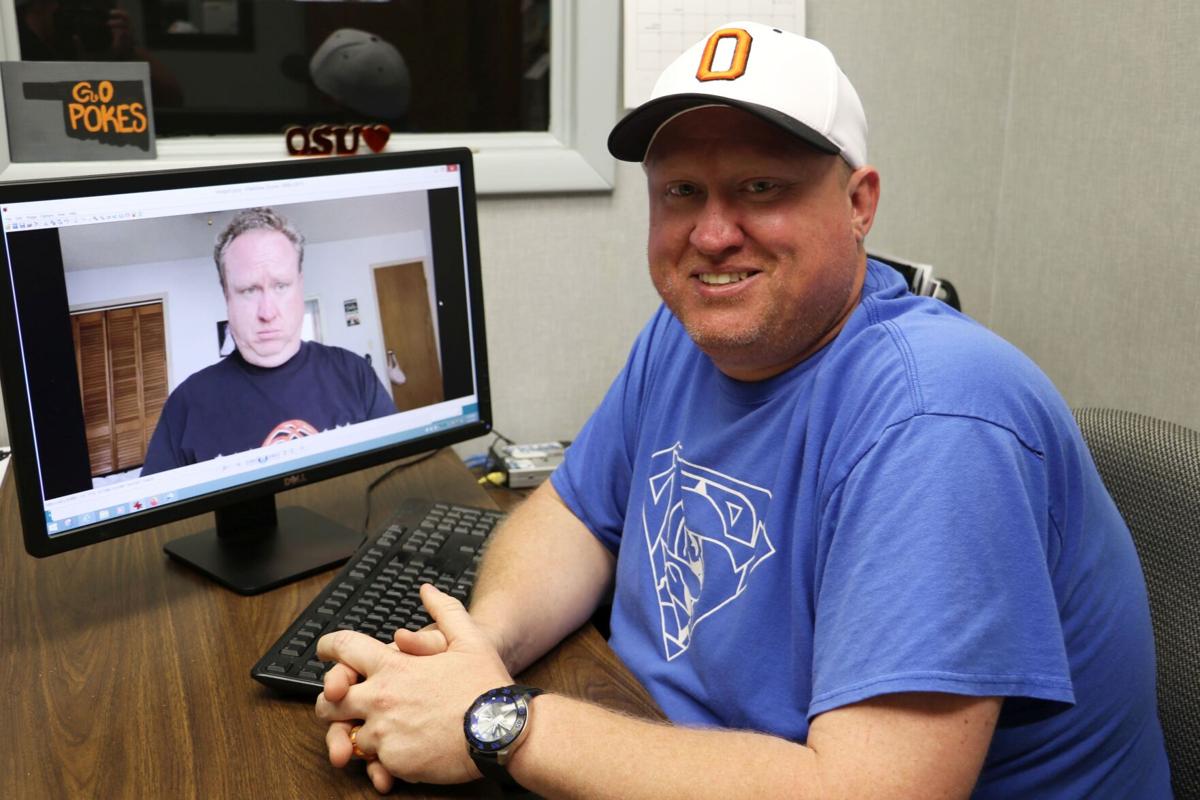 For the love of laughter: Sloat video chosen for American’s Funniest Videos 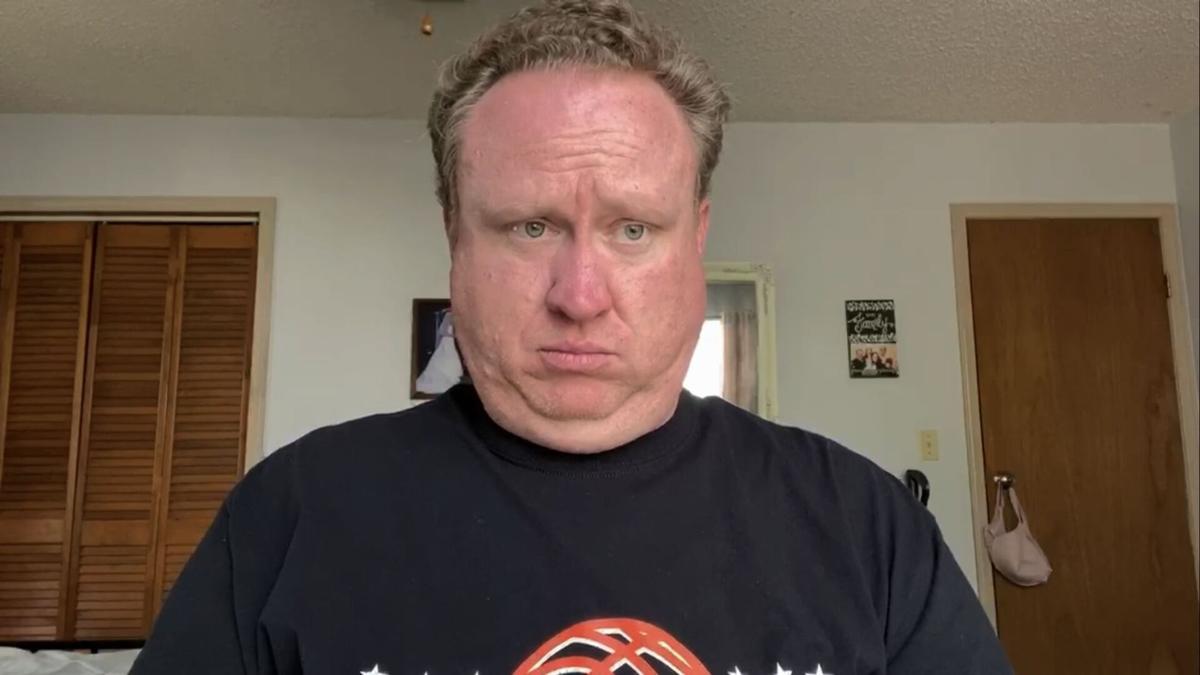 Here is a screen shot of the look on Travis Sloat’s face when he notices his wife’s bra hanging from the back of a door that appears in his teaching video.

If laughter is the best medicine, then America is about to get a good dose giggles thanks to an Okay Public School teacher who has made the most out of a very delicate situation.

Travis Sloat was preparing to make a virtual teaching video for his middle school English Learning Arts students back in March about how everyone makes errors when they write.

He had prepped the room to make sure it was clean, double checked for mirrors and reflections, and shut the door to begin recording.

What happened next is what the educator called on social media, “When distance learning goes wrong.”

About 20 minutes into the recording, he noticed on the computer screen that over his shoulder, his wife Alicia’s bra could be seen hanging on the back of the bedroom door.

With a dead pan face, Sloat dropped his chin, sighed, and said, “My wife’s bra is hanging from the door.”

“I had done several different takes, and I probably looked at it 10 times before it registered all of a sudden,” Sloat admitted. “It (the bra on the back of the door) is a common thing at our house, and common everywhere else from what I see on the internet.”

The educator said knowing his audience was junior high kids, he knew it would be the first thing they saw, so he couldn’t let it go. He took the bra off the door and re-recorded the video. His students never saw it.

Later on, as he is known for his humor, Sloat put a screen shot of the video on social media – just a photo of himself doing the head drop thing.

He called that the funny part.

“We had several say, ‘I want to see the video’, so we put it on Twitter. People loved it! They sent it to friends and they loved it,” Sloat explained. “Then we put it on Facebook. All of a sudden, it was getting shared and shared. It went from 10,000 views to upwards of near 60,000 views.

“It’s not really viral, but has had a lot of views for a little teacher from Okay, Oklahoma!”

Meanwhile, apart from social media posts, Sloat’s mother, Teresa Henson, sent the video to America’s Funniest Videos. Her husband Robert saw it and watched it over and over again so they thought they’d submit it for consideration.

Henson did not tell her son about it until she received paperwork back from producers for him to fill out.

“I wasn’t going to do it because I don’t think the video is funny. I don’t see how it made it on the show,” Sloat admitted. “From what I’ve been told, the reason it’s funny is because people know me and it was clearly not faked. I could not have faked this reaction – its mediocre funny at best.”

When Sloat received the call from AFV in Los Angeles, he was told the video may go in a show this season. During the summer, it went from ‘maybe on the show to you are definitely on the show.’

Not only was his entry a big hit, but he is now a finalist among the Top 3 videos on AFV when the show opens for its new season on Oct. 18.

“I was at my in-law’s house when I got the call to say I was a finalist,” Sloat recalled. “My first words were, ‘Shut up!’ and my 3-year-old son Isaac reminded me, ‘Don’t say that, Daddy!’”

He said his wife, Alicia, has kept him grounded through this entire process.

“What I love about my wife is she is my ballast. If I get to thinking I’m bigger than who I am, my wife keeps me on that even keel. Sometimes it’s with a whisper and sometimes with a fist,” Sloat said. “My wife makes me a better person every single day.

“She said, ‘The video is you, but remember it’s the one with the boobs that got us there’,” he noted. “I told her it’s about time your boobs made us some money! She’s had a blast with this too.”

As a result of the video online, Sloat has been interviewed by the Daily Oklahoman about distance learning. Tahlequah Public School has used it in a few training videos and a radio station in Ohio was talking about it on air.

He said one Oklahoma radio station had people trying to guess the size of Alicia’s bosom based on the bra in the video. They have taken it all in stride with a good sense of humor

Due to COVID-19, the Sloat family will not be flying to LA for the show. Instead, the AFV production team had a recording done in August. Travis, Alicia and their children, Drake and Aven, will all be on television when the show is aired in October.

While there is no word on where the Okay teacher placed in the Top 3, being a finalist will earn him a cash prize of anywhere from $2,000-$10,000. The teacher said, ‘That’s not a bad little stipend.”

He said the winnings, whatever they may be, will go toward the purchase of a new swimming pool.

The family will have a watch party on Oct. 18 to enjoy the show together. Planning to do so brings special memories back for Sloat as he started watching AFV with his siblings and parents when he was just 6 years old.

“We would sit down as a family to watch it and laugh at all the people doing stupid stuff. It’s wild that I’m actually going to be on there,” Sloat said. “This is something that has a close emotional tie to my family. It has come full circle 31 years later.”

Appearing on the AFV program will not be the first time the Sloats have been on television. In 2009, they appeared on the Tyra Banks Show in New York City for a program about blogging and first dates.

Travis and Alicia met while working at Wagoner Walmart and had their first date here at Arby’s. But that’s another story.

A Porter woman was injured Sunday after she was involved in an ATV accident in rural Coweta.

Deputies with the Wagoner County Sheriff’s Office are looking for a pair of suspects caught on surveillance camera during a Sept. 18 burglary …

Authorities are looking for a suspect that was captured on surveillance video breaking in at a residence in the 97th St. and 241st E. Ave. are…

Porter Consolidated School is moving to virtual days for the remainder of the week.

Interior wall of Main Street building has history glued to it

A sort of time capsule was discovered last week in one of the old Main Street building that survived fires or should we say re-discovered?

When Roger Hughes won the President’s Award and Business of the Year honors during Sept. 17 Wagoner Area Chamber of Commerce’s Awards Banquet …

In the movie ‘Field of Dreams’, a voice told the character played by Kevin Costner, “If you build it, they will come.”

For years, the Coweta Tiger Pride Band has represented its home community as a winner both on and off the field. In response, the community ge…

For the love of laughter: Sloat video chosen for American’s Funniest Videos

Here is a screen shot of the look on Travis Sloat’s face when he notices his wife’s bra hanging from the back of a door that appears in his teaching video.