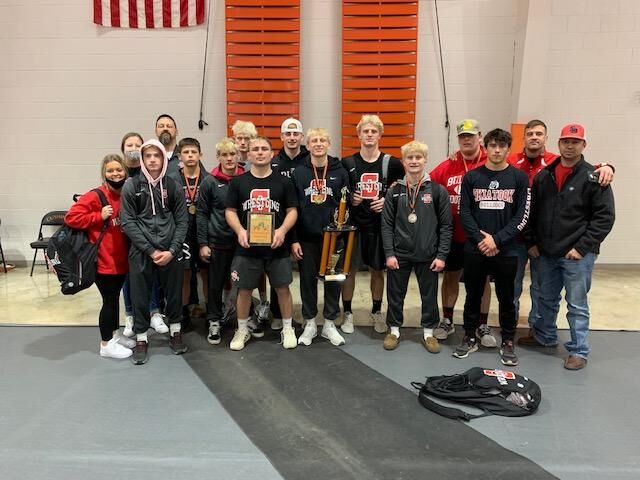 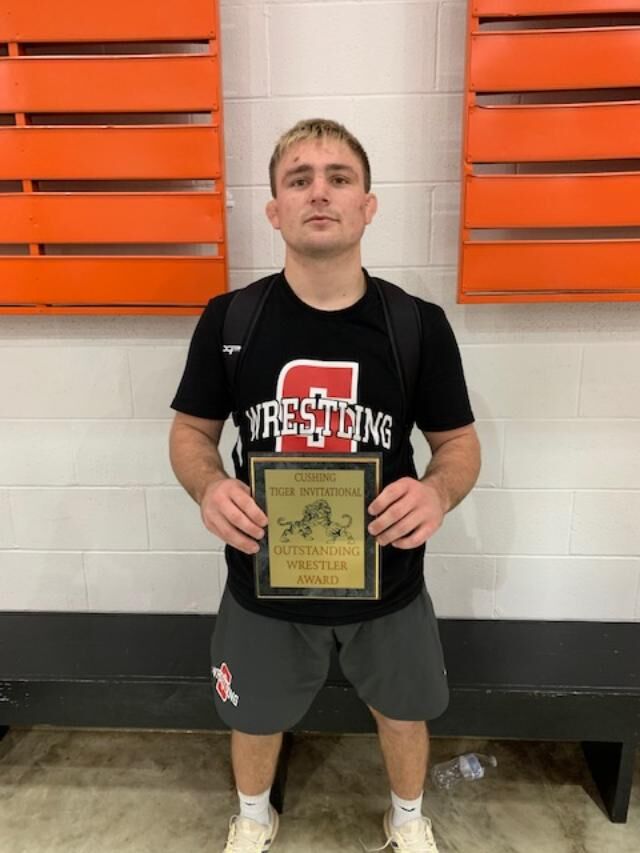 On January 8th and 9th, the Skiatook Bulldogs traveled to Cushing to compete against some of the top 4A schools in Oklahoma.

Skiatook dropped to 4A in tournaments this year so the coaches were eager to see how their team would match up with the other 4A schools and individuals.  After not being able to compete in their first two tournaments in December due to a cancellation and being quarantined the Bulldogs needed this tournament to regain some shape and more importantly every wrestler needed to get more mat time.

The Bulldogs showed up, worked through some shape issues and came away with the team title, two champions, a runner up and eight placers.

Josh Taylor at 138lbs and Cougar Andersen at 170lbs finished as champions, Brody Gee at 126lbs was a runner up and Hunter Hall at 195lbs took third place.  Fourth place finishers were Matt Patton at 106lbs, Sam Harris at 132lbs, Isaac Long at 145lbs, and Nate Easky at HWT.  Josey Jernegan at 120lbs took fifth place.  Sixth place finishers were Kyle Bowman at 120lbs and Tony Johnson at 160lbs.

Josh Taylor received a bye in the first round.  In the second round he went on to win by a seventeen to two technical fall in the first period over Tristan Tillery (Bridge Creek).

In the quarterfinals Taylor wrestled Toby West (Ft. Gibson) and won with a second period fall.  Up next in the semifinals the Bulldog faced the #2 ranked wrestler in 4A Boston Powell (Heritage Hall), Taylor is ranked #1 in 4A.

The three time state champion left no doubt in the Heritage Hall Lightning wrestlers head that he was the best wrestler as the Bulldog pinned him with three seconds left in the first period putting Taylor in the finals.  The Bulldog faced another tough opponent in Logan Smith (Perry) which was a state runner up last year.

Taylor was able to control Smith the entire match and came away with a seven to two decision over the Maroon making him the 2021 Cushing Tiger Invitational 138lb Champion.

Cougar Andersen receive a bye in the first round.  In the second round Andersen pinned Emmanuel Dolezal (Perry) with twenty-six seconds left in the first period.

In the quarterfinals the Bulldog wasted very little time in pinning Chase White (Sand Springs) in just forty-six seconds of the match putting Andersen in the semifinals.  Christian Mora (Blackwell) a state placer last year and ranked #2 in 3A at 170lbs stepped out on the mat with Andersen.  The two wrestlers went toe to toe for two in a half periods before Andersen preformed a throw that would put Mora on his back for a pin to send Andersen to the finals.

In the finals Andersen faced another tough wrestler in Gannon Allen (Heritage Hall) which is a state runner up and ranked #1 in 4A at 170lbs.  Cougar ranked #1 at 160lbs and a three time state champion had his way with Allen all match long on his way to a ten to two major decision making him the 2021 Cushing Tigers Invitational 170lb Champion and Outstanding Wrestler Upper Weights.

On January 4th the 5A #2 Skiatook Bulldogs hosted the 5A #10 Claremore Zebras.

All sporting events are subject to change or cancellation due to COVID-19. Attendance at many events has been limited. Masks and social distan…

The Bulldogs traveled to Vinita on December 15th in hopes of coming away with a win against the 3A #8 Hornets. The Hornets were not intimidate…