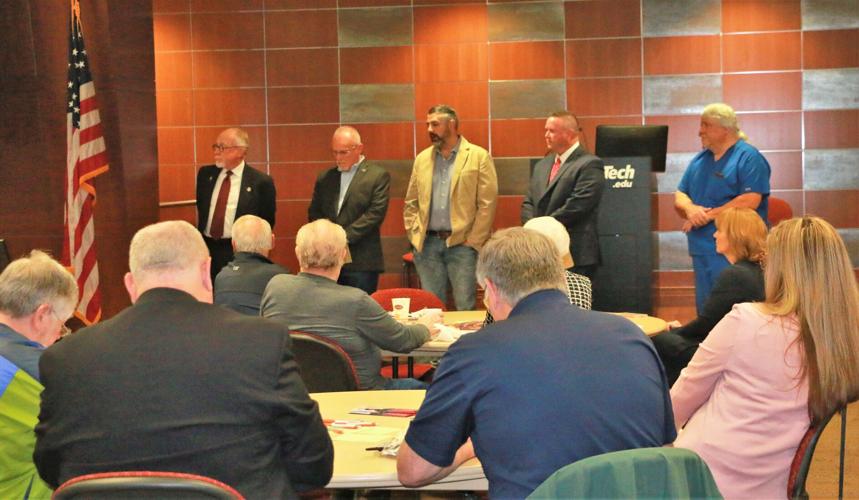 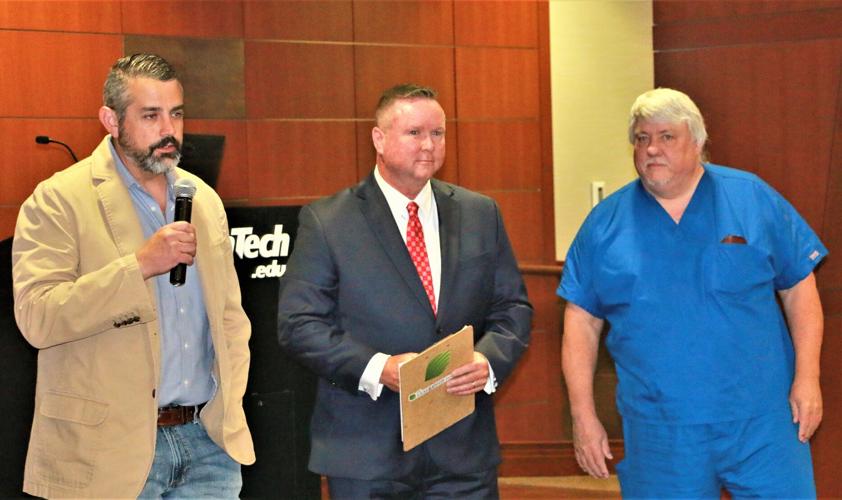 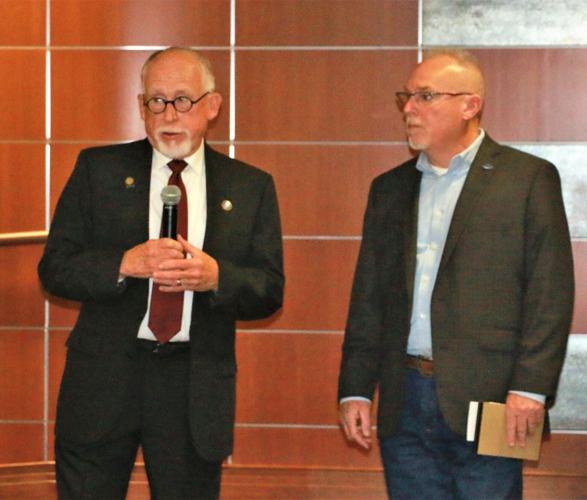 Republicans Mike Burdge of Sand Springs and Wayne Hill of Skiatook listen to a question at Thursday's candidate forum.

The five candidates campaigning to succeed veteran Rep. Jadine Nollan in the state House District 66 seat have a great deal in common, but their responses to questions put forth during a 90-minute breakfast forum early Thursday put a little daylight among them.

In his opening statement, Burdge emphasized his experience in municipal government. A longtime Sand Springs resident and 1969 graduate of Charles Page High School, Burdge has spent 26 years on the Sand Springs City Council, including 13 as mayor and six as vice mayor.

He also has served 22 years on the Legislative Committee of the Indian Nations Council of Governments and is a member of its Executive Committee.

Burdge, 71, also serves on the Oklahoma Municipal League’s Legislative Committee and spent three years as president of the Mayors of Oklahoma.

A Vietnam War veteran who is involved in veterans issues, Burdge and his wife, Cathy Burdge, have three children and three grandchildren.

Wayne Hill of Skiatook is the Osage County Republican Party chairman and the state chapter director for the Oklahoma 2nd Amendment Association.

Hill, 64, has a master’s degree in health care administration from Oklahoma State University and worked in the health care industry for 40 years until his retirement just two weeks earlier, he said in his opening statement Thursday.

He and his wife, Cathy Hill, have been married for 44 years. They have five children as well as 10 grandchildren age 7 and younger, eight of whom are boys.

Hill said he has been volunteering for 30 years in one capacity or another, is firmly anti-abortion and pro-Second Amendment, and believes “in the original intent of the Constitution and limited federal government.”

Gabe Renfrow now makes his home in Sand Springs, but he grew up in southeastern Oklahoma around McAlester.

He obtained a bachelor’s degree from Northeastern State University and then a nursing degree from Bacone College and has been a nurse for 17 years at the Oklahoma Heart Institute.

His wife, Gini Renfrow, is a nurse practitioner and an adjunct professor at the University of Tulsa. They have two children.

Renfrow, 45, said Thursday that he decided to run for the state House about six years ago after his daughter was born, when a friend asked him how he was going to take care of her. “So I’m doing this so I can make sure that her future is bright,” he said.

Clay Staires spent his childhood at camp, literally growing up at the Shepherd’s Fold Ranch in Avant, north of Skiatook. The Christian camp was begun by his parents in the early 1970s.

Staires played football for Barry Switzer while getting a degree in education at the University of Oklahoma before becoming a teacher in Tulsa and then Kansas City.

In 2002, he has his wife, Lisa Staires, returned to Oklahoma to lead Shepherd’s Fold, which they did for a decade before moving to the private sector and starting a consulting company called the Leadership Initiative.

The couple live in Skiatook and have two daughters.

Staires said he’s running for the state House because he wants “to protect our Oklahoma values and keep the feds out.”

The lone registered Democrat at Thursday morning’s forum was James Rankin, who has been a small-animal veterinarian in Sand Springs for about 36 years.

He grew up in Sand Springs and graduated from Charles Page High School in 1977 and then obtained two degrees from Oklahoma State University — a bachelor’s degree in agriculture education and a doctorate in veterinary medicine.

Rankin, who served on the Sand Springs City Council for four years, said he “made a promise to the Lord many years ago that at the right time, I would run for the House seat 66, so here I am.”

Rankin, 63, said he’s “a very devoted Christian man. I believe in God’s principles and believe in what he has established, and of course we know our country is getting so, so far away from that and we really need to get back to that.”

A question about school vouchers brought a variety of responses from the candidates.

Renfrow said he has “mixed feelings” about the issue.

“I think change is a good thing,” he said. I realize that every dollar is precious,” but “change would force both public and private schools to look for other ways to raise money,” which he said is a good thing.

Staires said he is a “firm believer that one size does not fit all. And being a public school teacher and private school teacher, I saw how one group in public school was just by its nature forced to move toward one size fits all, whereas in the private sector and home-schooling, they’re able to tailor the education toward the students.”

“I don’t know if I’m a supporter of the vouchers the way they are set up right now,” he added. “However, giving the power and giving the choice to the parents to how they want their child to be educated is very important to me.”

Rankin said he could not support vouchers as they were presented in this legislative session.

“I think there’s too many issues that were not very well-thought-out,” he said. “I’m not saying that I wouldn’t support vouchers. There might be a time when the kinks were all worked out that that might be a viable thing.

“Everything I’ve seen so far, I oppose the vouchers,” he said, adding that he has asked lawmakers who brought forth such proposals, “‘What’s the plan? After you burn down education with vouchers, what’s the plan?’

“Nobody has a plan,” he said. “They want to burn down public education and have a phoenix come up out of the ashes. I don’t think we’re there yet.”

On the other end of the spectrum, Hill was the most ardent supporter of vouchers.

“I believe in parental choice,” he said. “I firmly believe that no one is going to make a better decision for the children than the parents.”

He criticized the Stillwater school board for voting recently “to allow transgender — which are males — into the girls bathroom.”

He asked, “What’s a single mother to do if her 13-year-old daughter doesn’t want that male in her bathroom? What’s she to do?”

“I firmly believe we need to allow her to have an opportunity for her children to advance and to succeed, as well,” Hill said.

Another question concerned state lawmakers’ advancement of a number of proposals that would let the state's authority preempt local control on issues such as marijuana, drunken-driving and guns.

“I am very much in favor of local municipalities having the powers, having the funding … to run what they want to do in their cities,” he said, adding that the state is here to support but not to dictate what municipalities do.

“There were 12 bills introduced this year with the word 'preempt' in them,” Burdge said. “It’s a new catch-word at the Capitol.

A question about how to solve issues surrounding mental health care in Oklahoma brought a short history lesson from Burdge, who noted that Sand Springs had a front-row seat to the dismantling of the Hissom Memorial Center in 1994.

The group homes that were supposed to be the solution to the problems at Hissom failed, “and nothing was done to replace them,” he said, leaving many of the former Hissom residents to end up in the judicial system.

“It’s going to take some initiative to fix this,” Burdge said, “but first of all, the Legislature has to be made aware of how big of a problem this is.”

Hill said the state’s “homeless problem is getting worse,” adding that other states, including California, are “busing their homeless into Oklahoma.”

“We need to address the drug use in this nation,” he said, adding that one way to help might be “reinstitutionalizing these individuals.”

“They get good care there. I remember these institutions whenever I was a younger man,” he said. “These individuals got help. Now on the street, they don’t. They linger for years, and they die on the street.

“That’s not humanitarian to me.”

Renfrow criticized the training — or lack thereof — that first-responders in Oklahoma are provided for dealing with mental health issues.

“It’s amazing the education we don’t receive as first-responders,” he said. “It’s very minimal. Most of it is on-the-job training.”

In response to a question about whether the candidates would have the courage of their convictions if elected, Hill noted proudly that the Osage County Republican Party was the first county party in Oklahoma to censure U.S. Sens. Jim Inhofe and James Lankford for not voting on Jan. 6, 2021, to “delay the (presidential) election to actually see whether that was a legitimate election or not.”

Staires discussed the boundaries he would apply when deciding his positions on issues.

“I’ve got four boundaries,” he said: “Is it Bible? Is it Constitution? Is it simple? Does it make sense?”

Another question concerned “nullification,” in which lawmakers pass legislation that they know to be unconstitutional or in violation of federal law. Many times, those laws end up being challenged in court, and when they are overturned, taxpayers must foot the legal costs of defending them.

“The way you pass laws should be constitutional,” Renfrow said. “And taxpayers should not foot the bill for that problem.”

Rankin said: “Certainly that has been an issue with the abortion issue in this state — the state passing laws that they know that the Supreme Court is going to overturn.”

Even when well-intentioned or for biblically inspired reasons, “it needs to be done constitutionally,” he said.

Hill was the only candidate who said he had no problem with nullification.

“First of all, the federal government breaks the Constitution every day,” he said.

“I say the federal government is breaking the Constitution.”

Sausage Brothers Meat Market & Deli celebrated its one-year anniversary at the beginning of May, and hosted a ribbon-cutting ceremony with the Skiatook Chamber on Saturday.

An evening full of toasts and tributes marked the celebration of Skiatook Chamber’s 2022 Annual Awards ceremony over the weekend.

The property, located at the intersection of Oklahoma 20 and U.S. 75, just east of Skiatook, will offer two 15,000-square-foot facilities for different local retailers to lease.

Owner Jeff Hartman moved his Main Street barber shop about a block east of his original location, and commemorated the occasion by hosting a ribbon-cutting ceremony with the Skiatook Chamber on Wednesday.

Republicans Mike Burdge of Sand Springs and Wayne Hill of Skiatook listen to a question at Thursday's candidate forum.