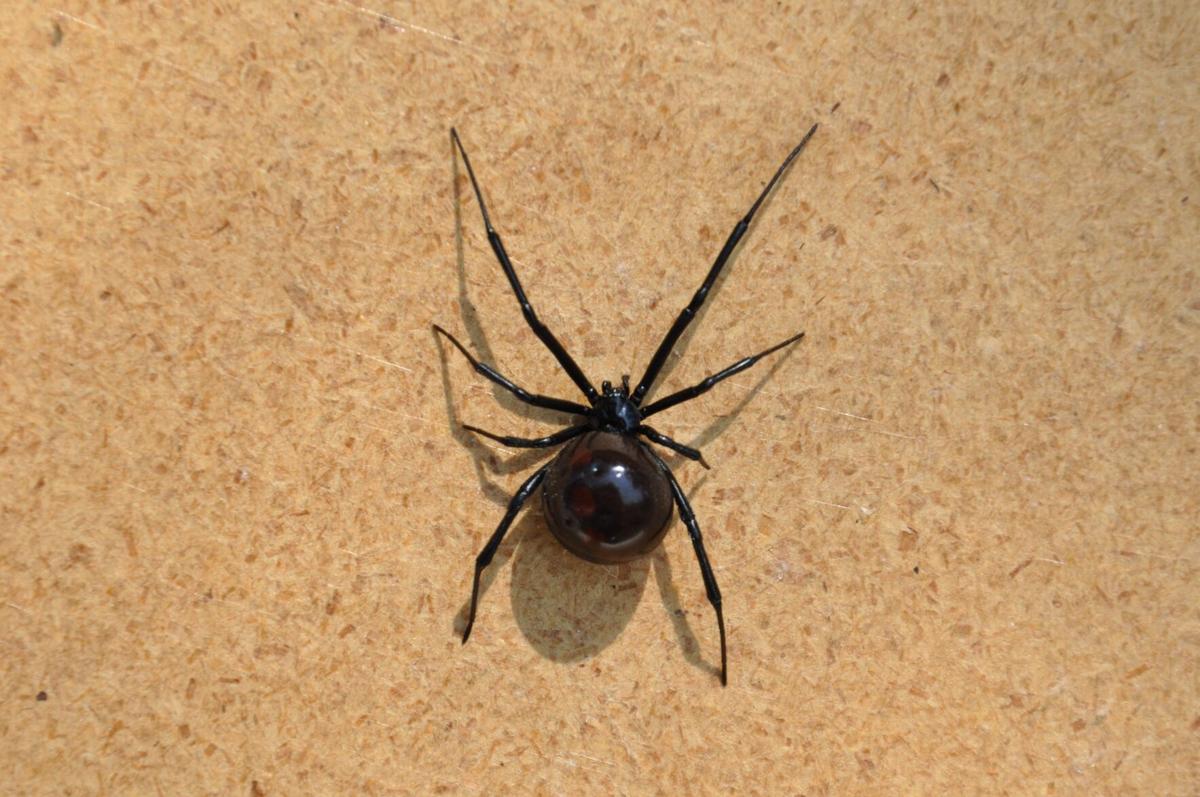 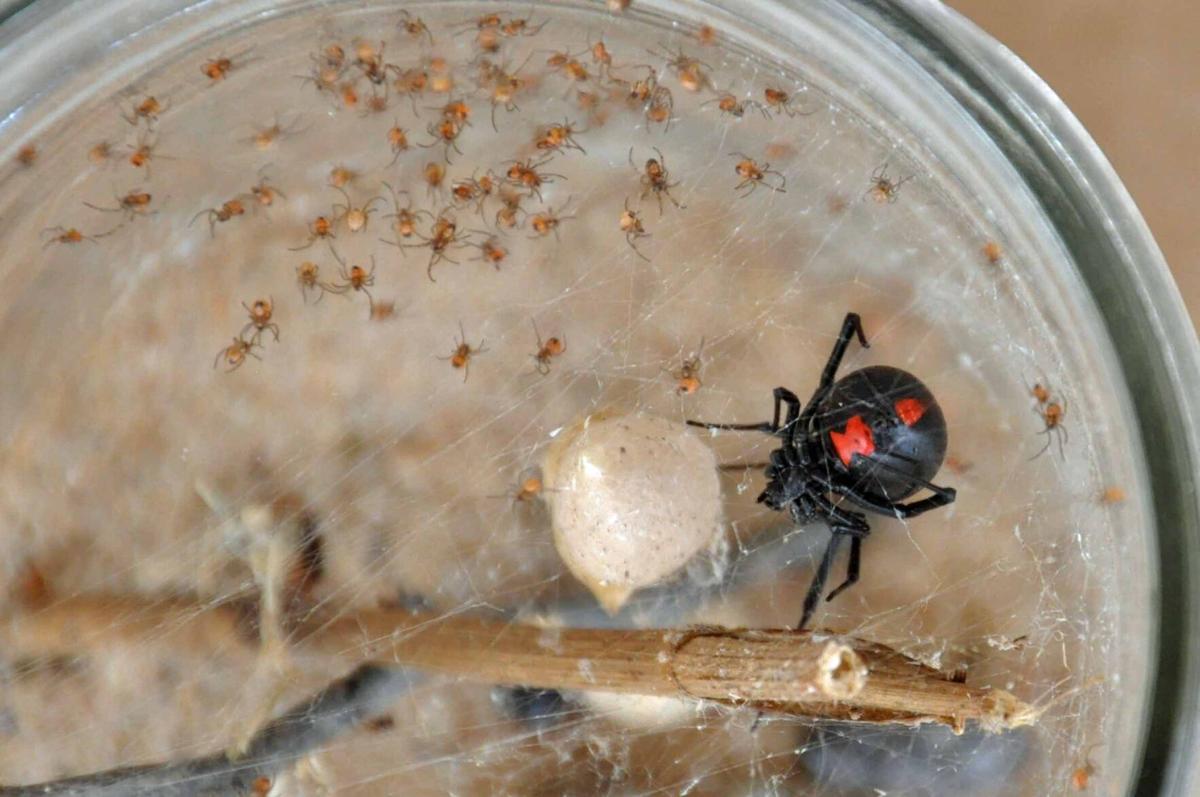 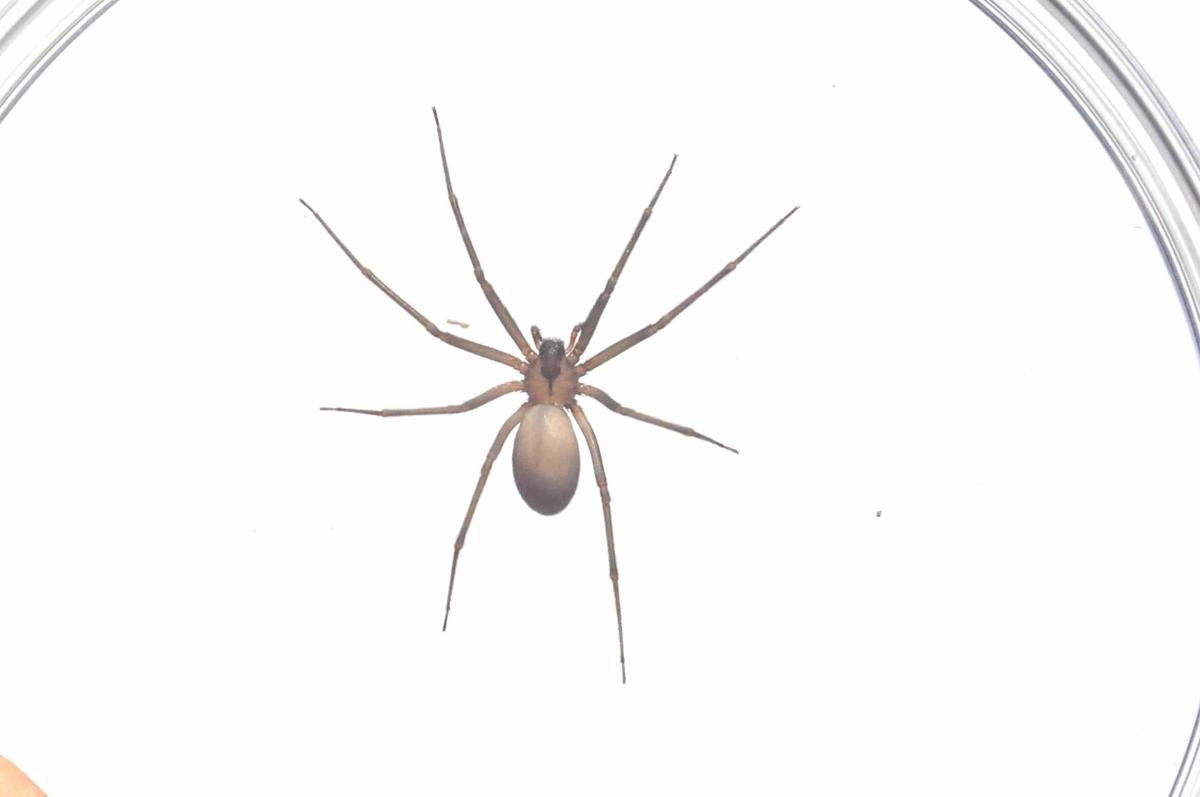 The black widow is a shiny black spider with a red or orange hourglass marking on the underside of the round abdomen. She may also have additional red spots. The overall length is about 1½ inches, the body is up to ½ inch long. Male black widows are gray or black, are about half the size of the female and do not have the hourglass marking on the belly. However, they usually have red spots on their backs. The spiders tend to be found in damp areas. The one in the photo with the egg sac and babies was found by my wife under an outside water faucet.

When the male approaches the female’s web he will tap on the silk to let her know he’s a suitor and not a meal caught in the web. Unfortunately, it often doesn’t help because after mating the female may eat him. That’s why she’s called a widow. This trait is referred to as sexual cannibalism and is seen in some spiders and insects. Research has shown, though, that the male allows himself to be eaten because the longer he can mate the more offspring he will have. The sacrifice is called copulatory suicide.

The black widow is not an aggressive spider. She is calm, slow-moving and will bite only if threatened. The venom is a neurotoxin (it affects the nervous system) and is 15 times more toxic than rattlesnake venom. Fortunately, only a small amount is injected when the spider bites. Symptoms include excessive sweating, severe muscle pain and spasms, abdominal cramps, difficult breathing and rapid heart rate. In life-threatening situations and antivenin is available. However, it may cause serious allergic reactions.

As the name implies, the brown recluse is a brown spider, one with relatively long legs. There are no marks on the abdomen. The recluse is also called a fiddleback spider. From the photo, can you see why it’s called that? On the cephalothorax (the head and thorax are fused in spiders) there is a dark brown, inverted violin-shaped marking. The body is less than half an inch long and the male is slightly smaller than the female. The male’s abdomen is a darker brown than the female’s.

The brown recluse is found mainly in the midwestern states, those surrounding Missouri and Arkansas. Unlike the slow-moving black widow it’s a fast-moving spider. It’s called a recluse because it is “shy” and remains hidden out of sight in dark, dry areas such as barns, sheds, attics and closets. We see them quite often in our house, especially in late fall as it begins to get colder. It’s not unusual to find one in a sink or tub in the morning. It will be there because it can’t climb up the porcelain surface. If you find a brown spider in the house and it has stripes or other markings on its abdomen, it is not a brown recluse. The recluse abdomen is unmarked (see photo).

Bites are accidental, usually when a person puts on clothing, shoes, gloves and other items that have not been worn in a long time and a spider has moved in. Most bites are minor and don’t produce symptoms. However, medical treatment may be needed in a small number of cases. While the bite is painless, mild to severe pain develops within a few hours, accompanied by redness, itching and a blister at the site of the bite. This is frequently followed by nausea, chills and headache. The blister becomes an ulcer that may take weeks or months to heal. When the ulcer begins to heal, the dead tissue is removed, and skin grafting may be needed.

The American beautyberry is a 3–5-foot-tall shrub with long arching branches. It is found throughout the southern states as far west as Oklaho…