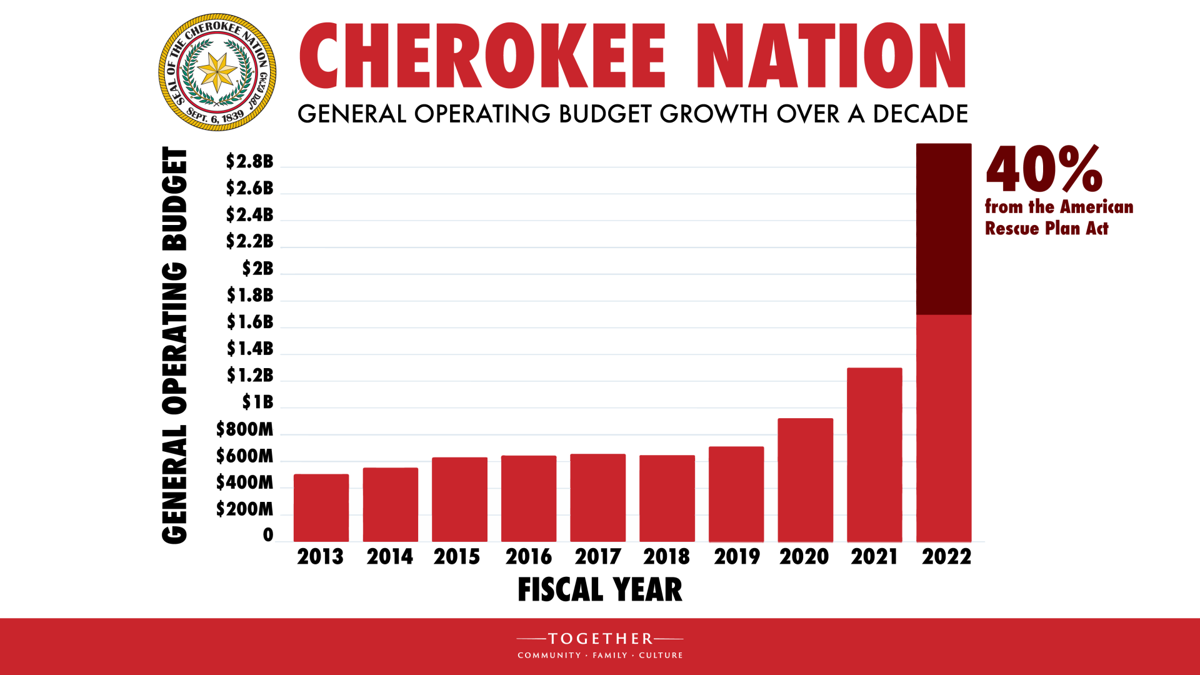 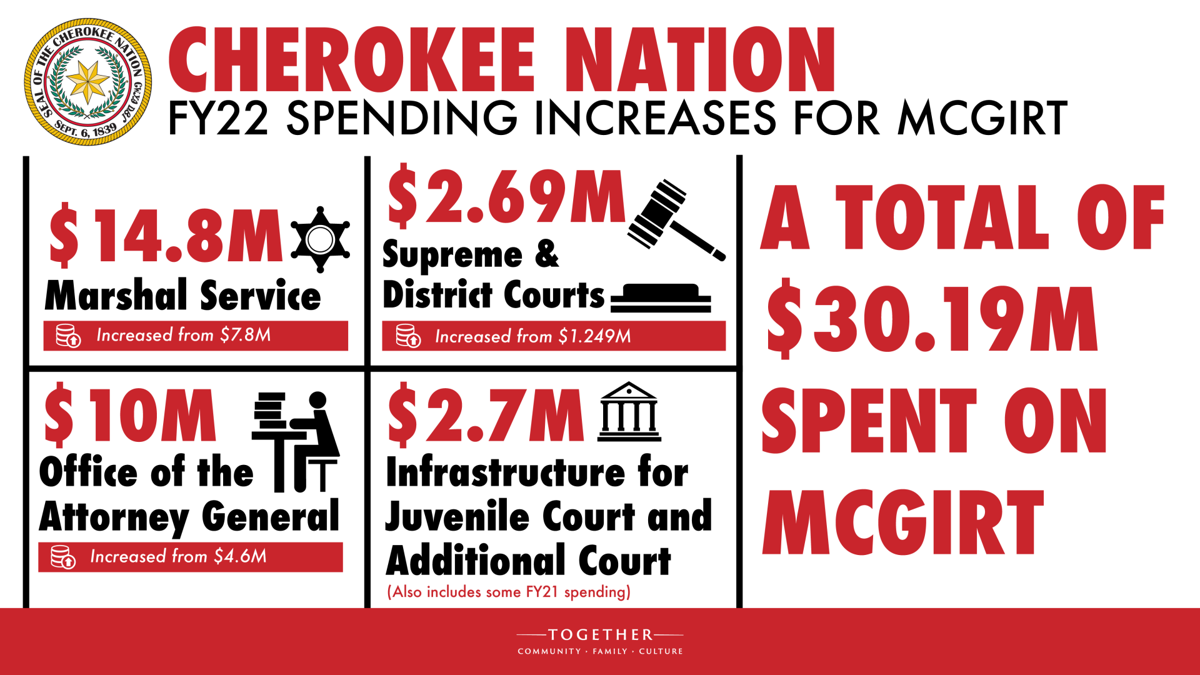 The Council of the Cherokee Nation approved the FY22 General Operating Budget of $2.98 billion and a capital investment budget of $418.5 million during Monday night’s Council meeting.

American Rescue Plan Act funds accounted for about 40 percent of the revenue sources for the FY22 budget, along with grants, tribal dollars and revenue from federal programs.

The budget increase will help with COVID-19 response programs, and provide staffing and services to expand the tribe’s criminal justice system upholding obligations under the U.S. Supreme Court McGirt ruling.

“The Cherokee Nation continues making investments for our Cherokee people including plans to build a new state-of-the-art W.W. Hastings Hospital, new Head Start centers and upgrading mental health and wellness facilities that will serve our people for years to come,” Principal Chief Chuck Hoskin Jr. said. “In a time when our people have struggled through COVID-19, we will make significant changes with this budget to help Cherokees recover and have the best health care, education, language, housing, infrastructure and jobs and so many other services they need. We will also continue building up the largest criminal justice system in our tribe’s history in record speed to provide a blanket of protection within the Cherokee Nation Reservation for all citizens. I applaud the work of the Council’s Executive and Finance committee.; Council members review budgets monthly and worked for weeks leading up to the FY 2022 budget hearings to help ensure we crafted a solid budget to service the Cherokee people.”

Treasurer Janees Taylor first presented the FY22 Budget to Council on September 7 in which it passed Executive and Finance Committee with a 16-1 vote, with Councilor Wes Nofire opposing.

Deputy Chief Bryan Warner praised the Council for working with him and Chief Hoskin on the historic budget.

“More than dollars is the potential that these dollars mean in terms of making generational change for the Cherokee people. There is a spirit of cooperation between the Council and administration that will make these investments very powerful,” Deputy Warner said.

Several departments doubled their budgets for increased staffing to uphold obligations under the U.S. Supreme Court McGirt ruling, from policing, to prosecution to victim protection services.

Other departments increased in response to COVID-19 needs and to add additional services and programs for citizens.

Health Services had a $317.8 million increase for a $924.5 million total budget this fiscal year for additional COVID testing and treatment, among adding more staffing.

“As the Executive and Finance Committee Chair on the Council, it’s exciting to have a hand approving the largest budget in our tribe’s history and I’m looking forward to seeing our tribal workforce expand and build in more services, programs and infrastructure that will make positive change for our citizens, not only in the next year, but for years to come,” said Councilman Keith Austin of Claremore.

The Cherokee Nation also expects to grow its tribal government employee base to more than 5,000 employees in FY22 which begins Oct 1, 2021 and ends September 30, 2022.

The Annual Pioneer Day Festival kicks off on Thursday night, September 23 with amusement rides and a carnival in Central Park from 6-10 p.m. T…

Skiatook Public Schools announced today it is participating in a free breakfast and/or lunch program for school year 2022. All students enroll…

Effective September 1, all visits to Oklahoma Human Services (OKDHS) offices will be by appointment only to protect the health and safety of t…

Skiatook has 119 active cases, Sperry has 29

Betadine, a company that produces iodine, the latest product in the latest misinformation campaign dubbed as a cure for COVID-19, has stated t…