T.J. Cotton, Alex Williams, and Bryer Maxwell, all seventh graders at Olive Public Schools, build a device with provided materials as they compete in the egg drop event during a Native American STEM competition at the University of Tulsa on Monday. 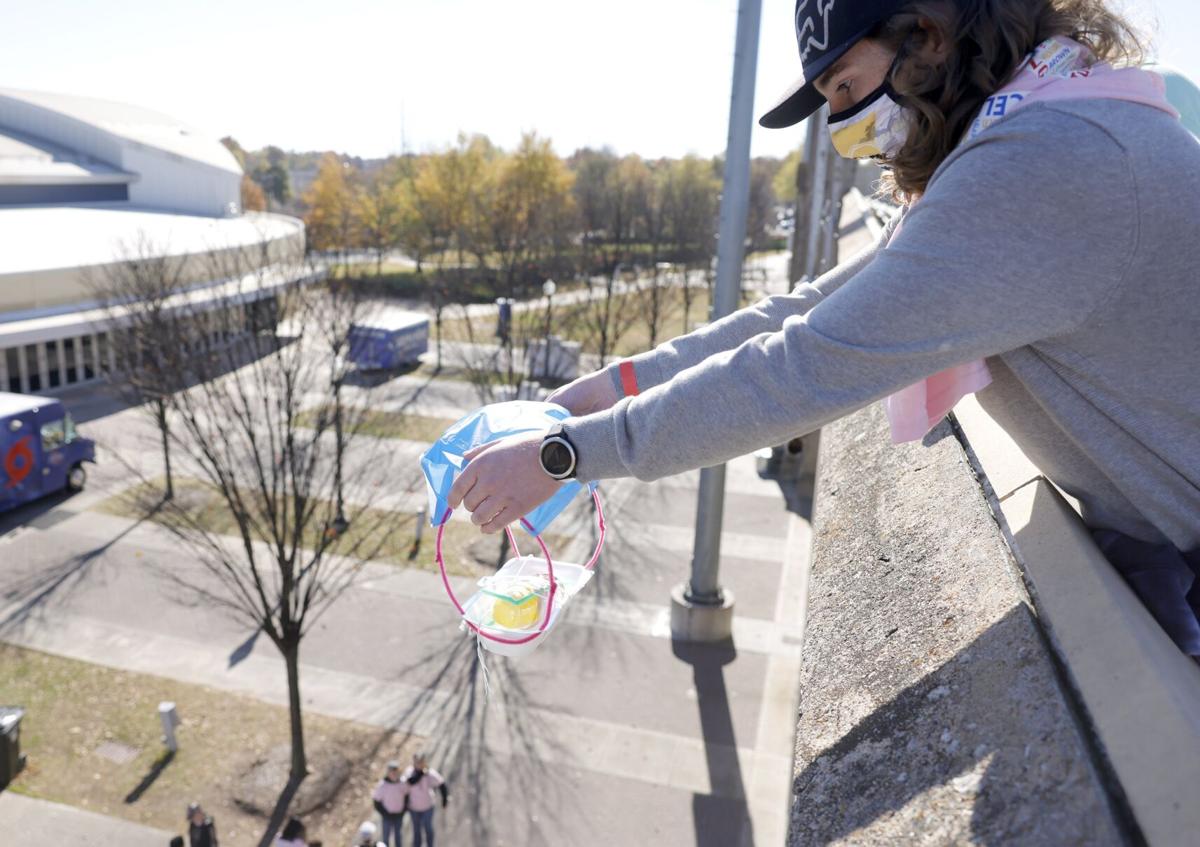 Griffin Randolph, a junior at Olive High School, drops his entry in the egg drop event off the back of H.A. Chapman stadium. 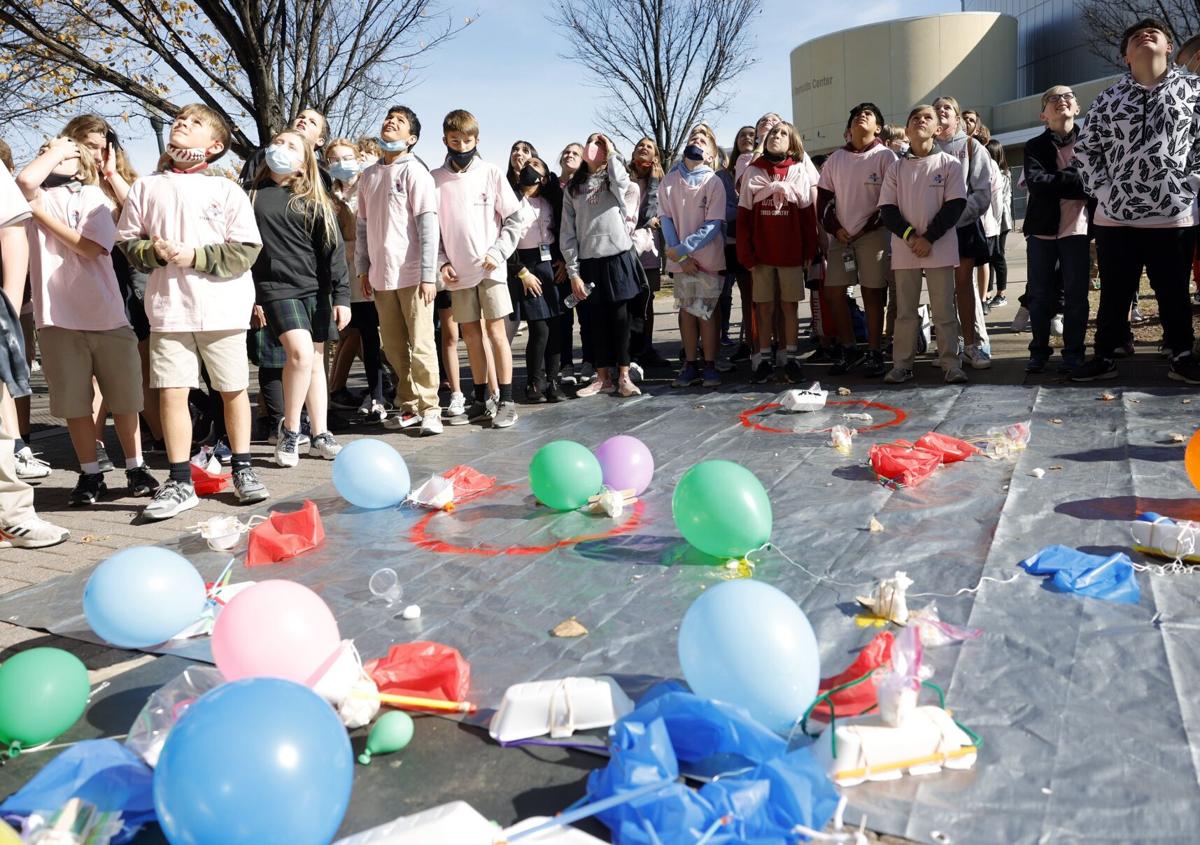 Pieces of previous entries in the egg drop competition lie on a landing pad while a group of students watch the next competitor during a Native American STEM competition at the University of Tulsa on Monday.

With its own students out for Thanksgiving, the University of Tulsa hosted almost 1,100 area middle school and high school students Monday for its annual Native American STEM Student Competition.

Schools could send teams of five students and at least four of the five students on each team had to identify as Indigenous in order to participate.

Funded through grants from the National Science Foundation and the Oklahoma Established Program to Stimulate Competitive Research, Monday’s event featured five hands-on challenges focused on science, technology, mathematics or engineering. Additionally, participating students were required to complete a poster ahead of time on the scientific topic of their choice.

“The whole purpose of it is to get Native American students involved in STEM,” event organizer and TU associate professor David Brown said.

According to statistics compiled by Sandia National Laboratory, American Indians and Alaska Natives account for 0.3% of the engineering workforce and 0.4% of all engineering degree recipients nationwide.

Advanced Placement participation rates from the College Board tell a similar story, with Indigenous students accounting for 0.4% of the students taking an AP computer science course nationwide in 2019.

“We need to prepare our students for careers in those fields,” Brown said. “This competition gets students excited about it, let’s them realize that there’s problem solving challenges that they can be a part of. Once they see these competitions … it’s more likely that they’ll go to college, major in a STEM field and pursue a career in one those areas.”

Along with a scavenger hunt, a cryptography event and an engineering challenge requiring students to figure out how to throw tennis balls in a kiddie pool only using a bath towel, among the tasks students had to complete Monday at TU was an egg drop competition.

The students were given half a Styrofoam container, some pipe cleaners, cotton balls, rubber bands, a plastic spoon, small plastic cups, tongue depressors, a plastic straw, string, tissue paper and two balloons to devise a contraption that would allow a raw egg to survive a fall from the top of Chapman Stadium’s east bleachers.

Clyde Boyd Middle School Sean Merrill and his four classmates were short a balloon, prompting an extended construction debate about whether just one would provide their egg with sufficient cushion underneath the Styrofoam and cotton balls.

“One butt cheek will do it, guys,” Merrill reassured his teammates. “One will do it.”

Their egg survived unscathed, while some of their fellow Clyde Boyd students were not so lucky.

Chloe Wasson and Lilli Searcy made a parachute for their egg, which was nestled in a plastic cup with cotton balls. Their egg did not outlast the multi-story fall, but the pair said they still enjoyed the opportunity.

“This is more fun than anything,” Searcy said.

The closure is in conjunction with the $336 million extension of the Gilcrease Expressway west of downtown Tulsa.

The Pride of Oklahoma snare drum line has just nine coveted spots. That two of the nine are Charles Page High School graduates — and siblings — is nothing short of astounding.

The 5,830-square-foot gym and classroom facility will cost $943,581, money that has been socked away from proceeds of a dedicated public safety sales tax voters approved in 2015.

From a Christmas tree-lighting ceremony and the annual parade to a Noon Year's Eve balloon drop, the month's events offer something for everyone.

One confirmed COVID case was reported at Limestone Technology Academy, and a second was reported at the Sixth Grade Center/Clyde Boyd Middle School, according to data the school district released Friday.

The last time the city had a reporting period with no new deaths and a decline in active infections was in early June, data show.

The Billie A. Hall American Legion Post 17 in Sand Springs is partnering with Wreaths Across America to decorate more than 1,500 veterans graves at Woodland Memorial Park, but they need the community's help to buy the wreaths.

T.J. Cotton, Alex Williams, and Bryer Maxwell, all seventh graders at Olive Public Schools, build a device with provided materials as they compete in the egg drop event during a Native American STEM competition at the University of Tulsa on Monday.

Griffin Randolph, a junior at Olive High School, drops his entry in the egg drop event off the back of H.A. Chapman stadium.

Pieces of previous entries in the egg drop competition lie on a landing pad while a group of students watch the next competitor during a Native American STEM competition at the University of Tulsa on Monday.