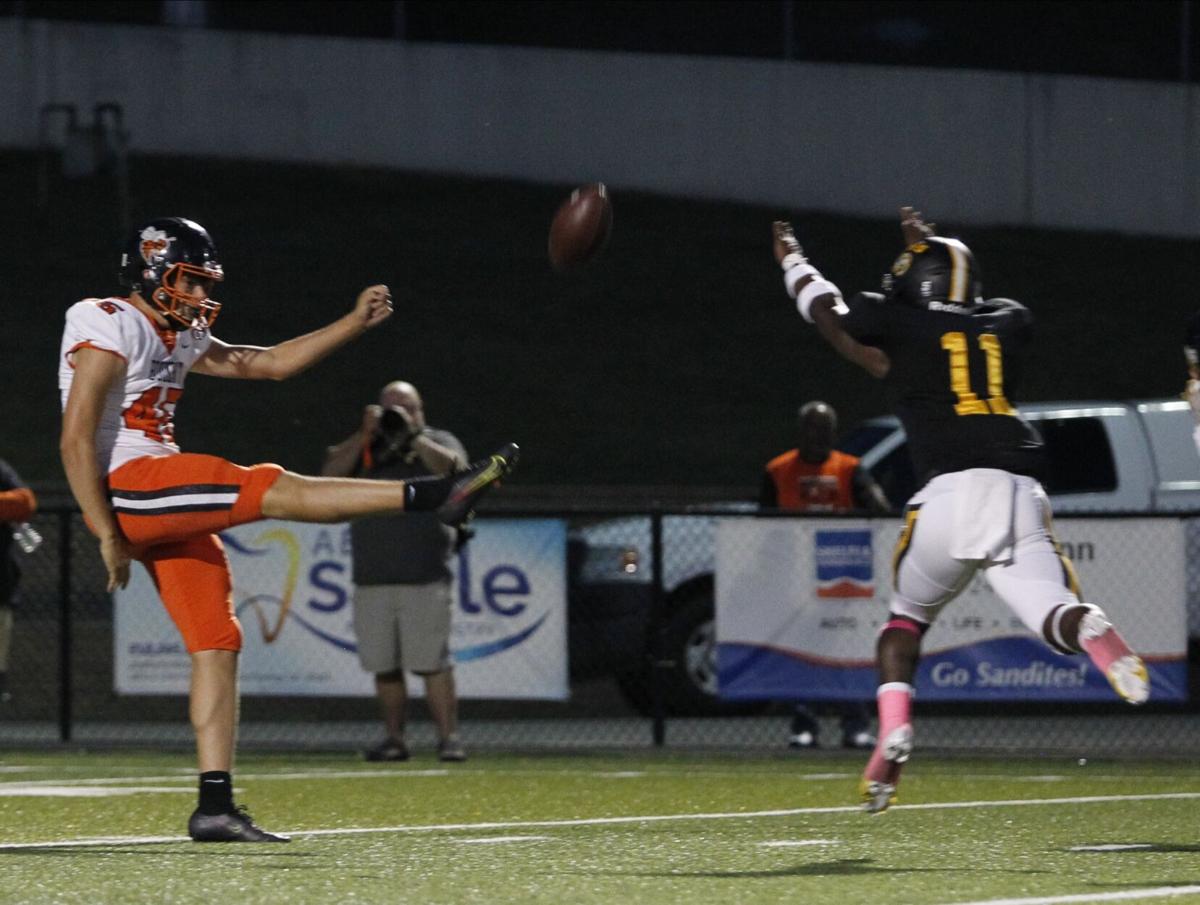 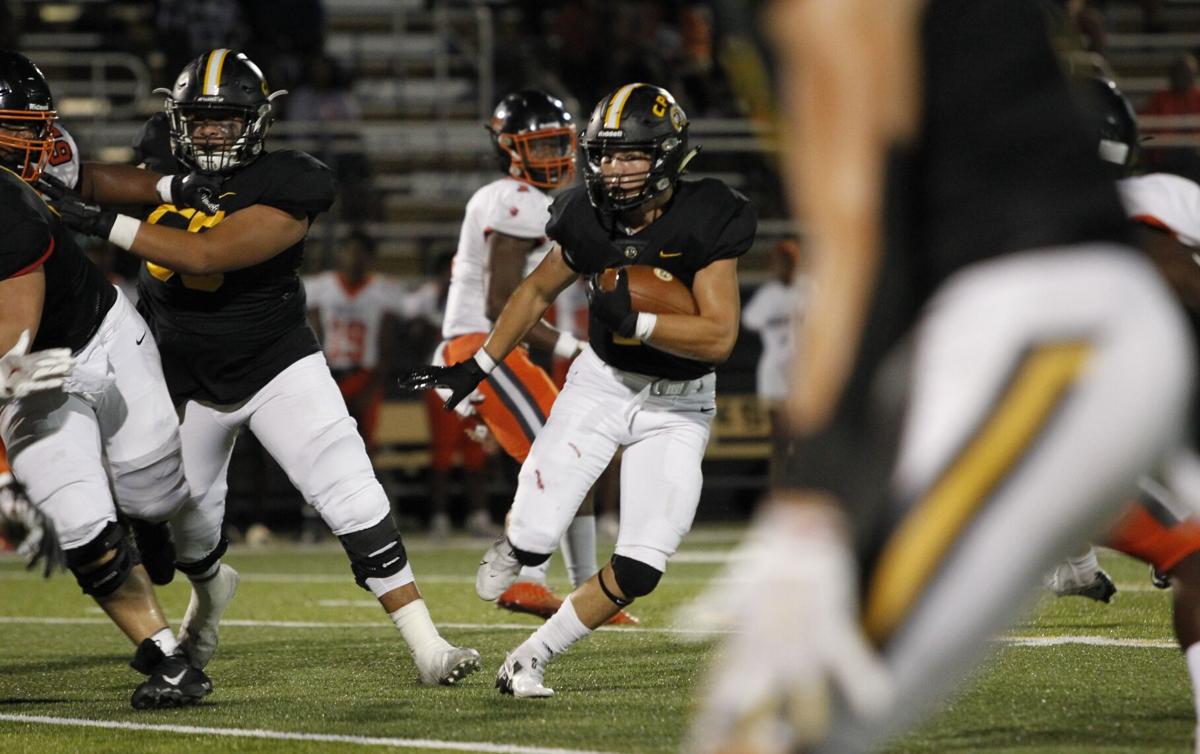 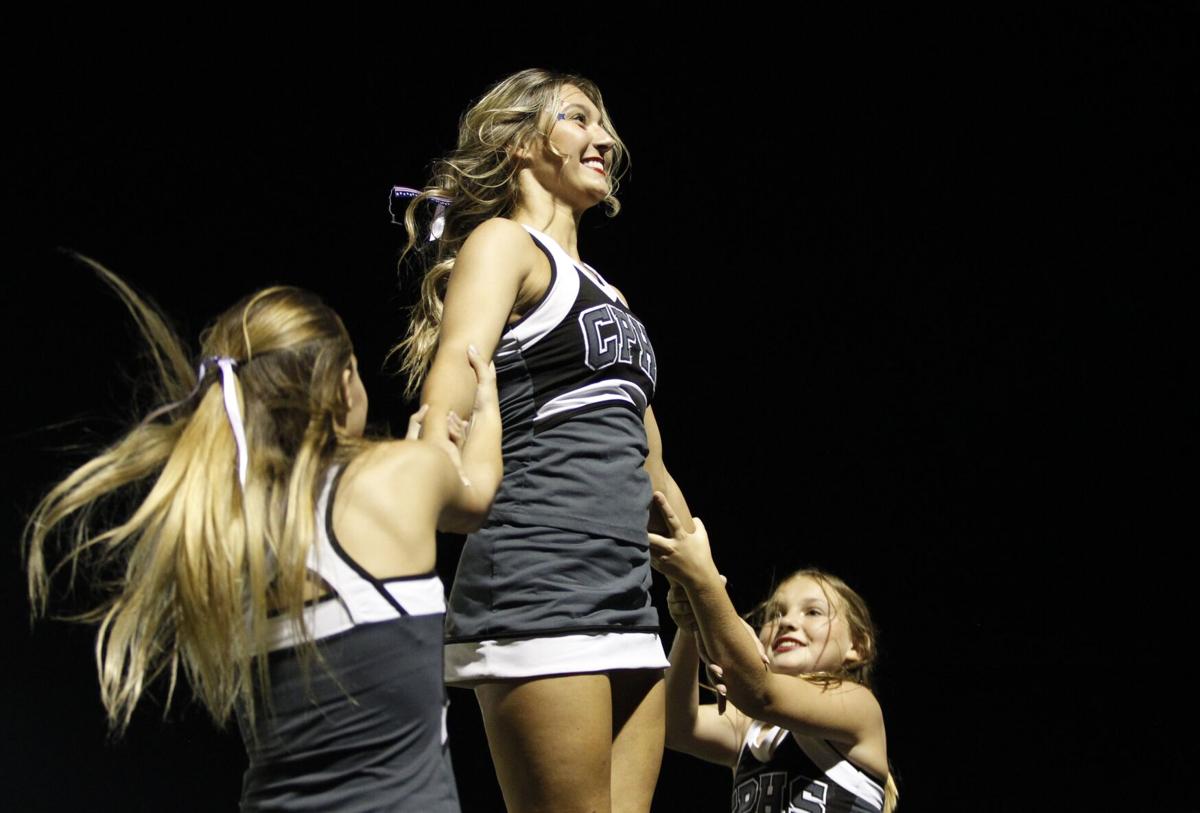 There was plenty for Sand Springs to cheer about Friday in a 37-32 loss against Booker T. Washington. CORY YOUNG/Forever Young Photos/for the Tulsa World

Usually when a football team takes a knee to run out the clock in victory formation, that means the game’s over. But with 1:21 left to play Friday, Sand Springs’ Dominic Ornelas burst through the Booker T. Washington line and snatched a takeaway to give the host Sandites one last shot.

Unfortunately for the fourth-ranked Sandites, the No. 3 Hornets would also get a sudden takeaway in the dying moments, as Micah Tease stripped the ball from Jacob Blevins just 16 seconds later, sealing the 37-32 win for Washington in a Class 6AII-2 showdown.

Friday’s loss was a far departure from the Hornets’ 49-0 romp over the Sandites last year at S.E. Williams Stadium.

Klinck said about his Sandites, “I think it’s just another year in the program and all the off-season stuff and just them being in our system more. We’re a little more familiar with what we’re doing. We told them that this game was going to be a measuring stick for our program and where we’re at. It would have been really nice to come away with a win, but I was very proud of the way we competed and we weren’t scared for sure, so that was very great to see.

Pennington was 14-of-27 for 270 yards and two TDs, and had 62 rushing yards with two more touchdowns. His Hornets counterpart Lathan Boone was 21-of-29 passing for 253 yards and three touchdowns.

Pennington’s yardage was enough to set the Sand Springs career passing record at 5,061, surpassing his own quarterback coach, Darrack Harger.

“If anybody’s going to do it, I’m glad it’s that guy,” Harger said. “I’ve told him for the past three years that my goal for him was to beat my record. That dude is a baller and he’s going to go on to the next level and do all kinds of great things.”

The visiting Hornets (5-1, 2-1) took the lead on their first possession with a 25-yard strike from Boone to Tease, but the Sandites quickly responded.

After completing a 22-yard pass to Brody Rutledge to set the new school record, Pennington dove in for a 1-yard touchdown to tie it up. He then found Blevins for a 30-yard score to take the 13-7 lead, but Logan Wolfe’s kick was blocked.

Deon McKinney Jr. tied it up for the Hornets on an 11-yard run, but Charles Gaylord blocked Jackson Marsh’s extra-point kick to pay back the Hornets.

Boone gave the visitors the lead soon after on a 17-yard, fourth-down strike to Demitrius Prudom and the Hornets went to the locker room up 20-13 at the half.

The Sandites got possession to start the third quarter and Pennington walked untouched into the end zone on a 13-yard draw, and Jonathan Daniels kicked the point after to tie it up.

McKinney put the visitors right back on top five plays later with a 43-yard run late in the third, then Marsh kicked a 36-yard field goal early in the fourth to make it 30-20.

Kenneth Page entered the game for Sand Springs after star running back Blake Jones left with an injury in the first quarter, and scored his first varsity touchdown on a 13-yard run, but Daniels’ kick missed off the left upright.

The Hornets retaliated with a 40-yard TD pass from Boone to Tease, then the Sandites struck right back with a 9-yard TD throw from Pennington to Keaton Campbell. A 2-point pass failed, leaving the score at 37-32.

Rutledge led the Sandites’ receiving corps with 94 yards, followed by Blevins with 81 and Campbell with 73. Page rushed for 49 yards on 12 carries. Drake Fain led the defense with 14 tackles, Gabe Brown had six tackles and a sack, and Conner Light had seven tackles with two for loss.

Jones’ undisclosed injury isn’t expected to be season-ending, but Klinck is confident in Page’s ability to perform while Jones is out.

“For a sophomore he was pretty dang impressive,” Klinck said.

“I was scared about ball security, we’ve done so well with our ball security. He did a fantastic job. Great for him to get some early varsity action. I hate how it happened, but Blake’s a tough kid and he’ll come back, and it’s good to have a guy like Kenneth Page to fill in for the time being.”

Klinck was also impressed with his receivers’ ability to compete against one of the best secondary units in the state.

“Brody Rutledge, Keaton (Campbell), and Jacob Blevins,” Klinck said. “Great route runners, good hands, we’ve got speed and size. Ty’s able to fit it into windows and they make big plays. Again, as a coaching staff, we learned that our guys can make plays against the best in the state, so we’re going to take that moving forward into the rest of the season.”

Sand Springs will have another tall task Thursday as Bixby has won 42 consecutive games, including three state titles in a row. Bixby is coming off a 70-7 win at Choctaw and has scored at least 70 points in the past three games.

“We’re going to show up,” Klinck said. “Our kids aren’t going to back down, our coaches certainly won’t. We’re going to try to put a game plan together where it gives our guys a chance to be successful, but it’s really up to them to go make the plays.

“I do hope and I do feel like we got a confidence boost from playing a really good Booker T. Washington team that’s very fast, has really good skill players, and I think we found some things out defensively and offensively and kind of figured out who we are and what our identity is. We’re going to take this next week and really push that on our kids. We’ll see what happens on Thursday, we’re excited.”

Sandites prepare for Choctaw showdown after loss at Bixby

A tough three-game stretch wraps up Friday against the second-ranked Yellowjackets. CPHS needs a win to finish higher than fourth in District 6AII-2.

CPHS finished with a 14-20 volleyball record.

There was plenty for Sand Springs to cheer about Friday in a 37-32 loss against Booker T. Washington. CORY YOUNG/Forever Young Photos/for the Tulsa World