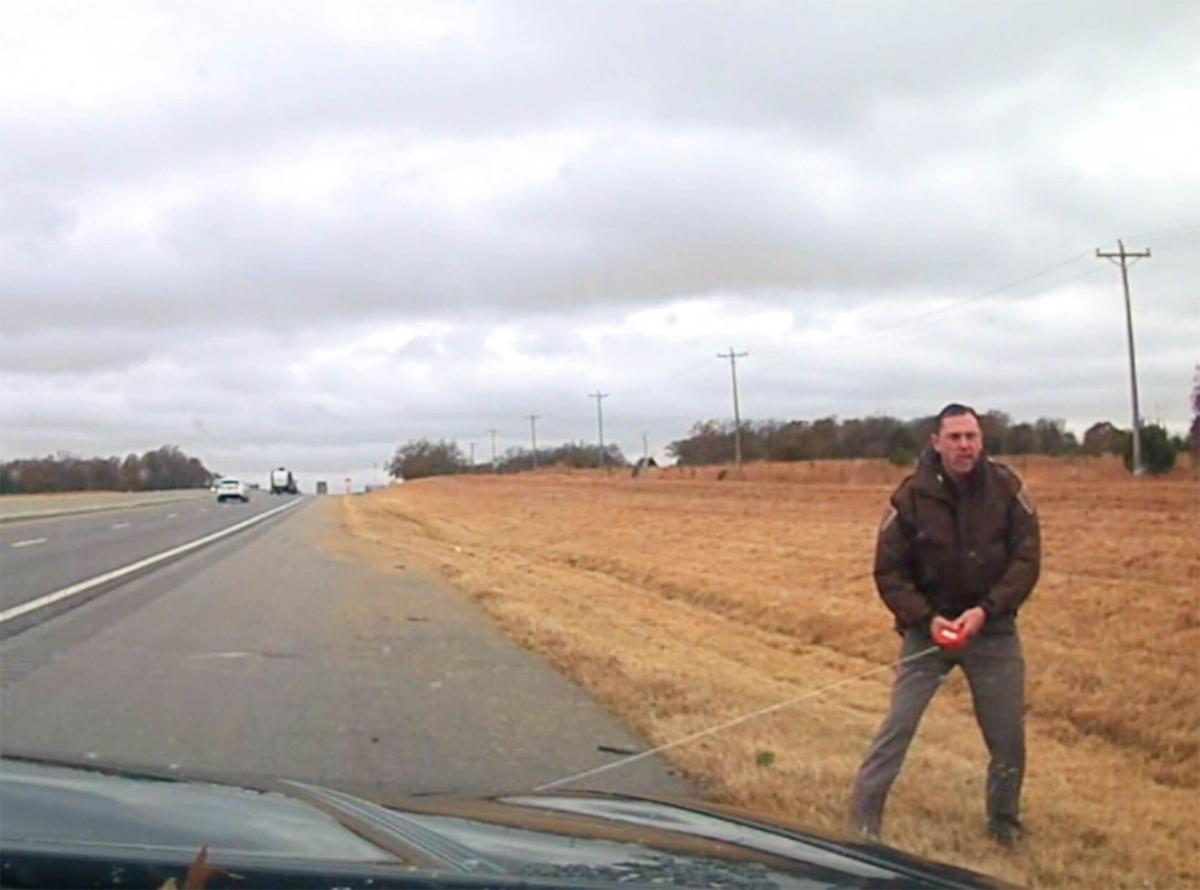 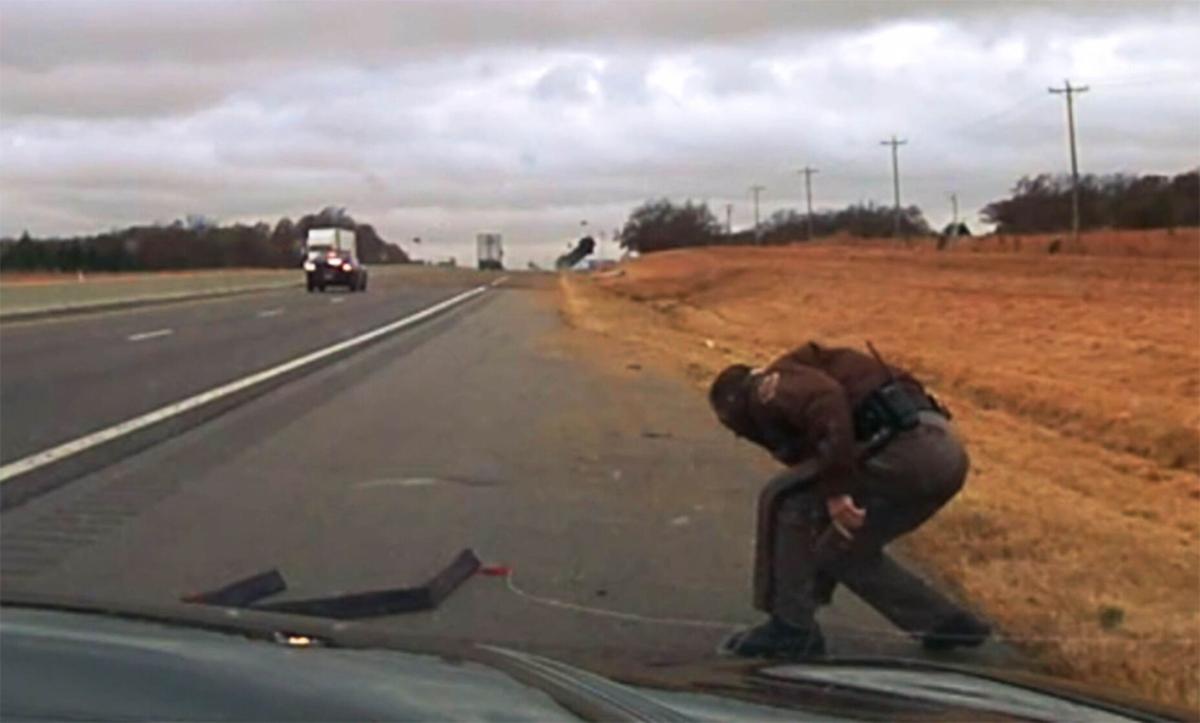 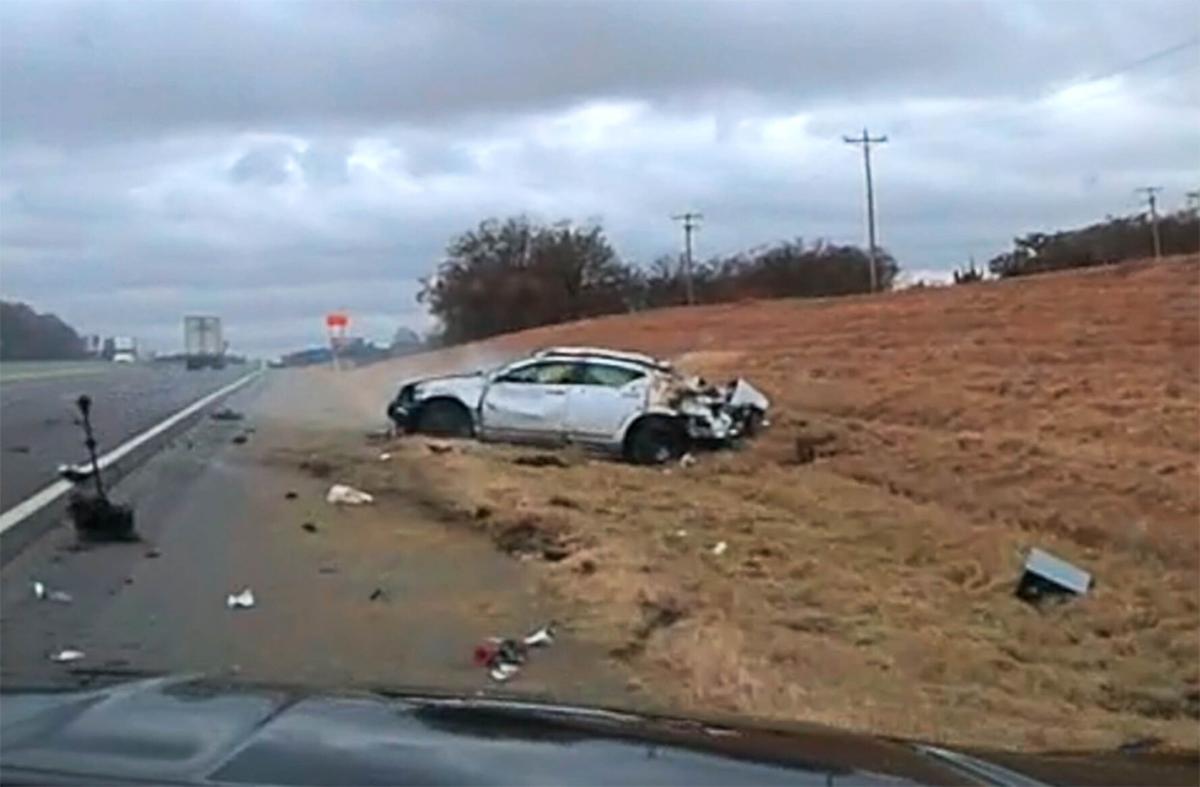 An Oklahoma Highway Patrol dashcam image shows a vehicle that crashed and rolled after swerving to avoid a spike strip in November 2019 near Stroud.

On a weekday afternoon, a state trooper stood beside Interstate 44 watching a stolen car speed toward him at 100-plus mph as precipitation fell amid freezing temperatures.

His flashing lights on, the trooper waved through motorists before acting in “a small window of opportunity.” He pulled spike strips into the path of the eluder, who swerved and died in a violent barrel roll.

With the 2010 Dodge Avenger being tracked by its lienholder via GPS, was pursuing on a busy highway in wintry conditions worth the risk? The Oklahoma Highway Patrol didn’t ask that question. Nor were any other inquiries made into the fatal chase.

OHP acknowledged it never reviewed the decisions nor actions of its troopers after a legal dispute with the Tulsa World prompted it to release the case file 20 months after the deadly pursuit.

The agency argued its deployment of spike strips isn’t considered a use of force because the suspect managed to avoid them; therefore, its policy doesn’t mandate a supervisory review even though a person died following troopers’ intervention.

Agency protocols leave substantial gaps in reporting and documentation that invite questions about accountability and transparency — including the chase Nov. 11, 2019, that killed a 35-year-old Tulsan.

“OHP has provided all the reports in this matter.”

White and Trooper Ronnie Sites, who used the spike strips, discussed the pursuit and crash on scene.

“I didn’t think he was ever gonna come to a rest,” said White, the lead pursuer. “I’ve never seen a car roll that many times.”

Sites later described deploying the spike strips as “some scary business.” White said a similar situation had played out with him in a previous chase.

“The last pursuit I had out here was almost the same scenario. ... The guy swerved and missed (the spike strips) and rolled,” White said. “He wasn’t going as fast.”

‘Better him than a good person’

White and Criddle spotted and followed the reported stolen 2010 Dodge Avenger westbound about 1:15 p.m. on I-44 as it slowly exited into the travel plaza near Stroud.

The lienholder — a used car dealership in Tulsa — had contacted law enforcement to offer the Avenger’s location and direction of travel from a GPS device, as well as a suspect description.

Starks momentarily stopped before the pursuit began, with the chase passing more than two dozen vehicles in its five minutes.

White and Sites discussed the chase afterward from inside White’s cruiser. White told Sites he “did perfect” on his spike strip deployment.

“Well, I’m sorry that the guy died, but better him than a good person,” Sites said.

About 10 minutes after the fatal wreck, Criddle was inside his cruiser with the stereo on when a weather report cautioned motorists to limit speeds because of the wintry conditions.

“It’s going to be important to reduce speeds today. That’ll help you both with the slick pavement and the strong winds.”

An OHP collision fatality report described the road conditions as dry and characterized the pursuit-related crash as “not an incident” instead of a “legal intervention.” A spokeswoman said that was the correct coding for the fatal crash.

An Oklahoma Turnpike Authority spokesman told Tulsa World that stretch of interstate was “damp” or “wet but not slick” after crews had treated I-44.

Footage shot by KWTV and an image from KOKH shows at least one OHP vehicle on scene had ice on its body.

While White and Sites were discussing the deadly crash on video, White made a remark about the cold.

OHP documents state that troopers found a handgun and shotgun in the car, and an autopsy found methamphetamine in Starks’ system.

At the time of the deadly chase, OHP spokeswoman Sarah Stewart told the Tulsa World that tire deflation devices generally aren’t considered a use of force because they are an inanimate object. They are listed as a use of force in the Highway Patrol’s pursuit policy.

OHP, in a written response to a question to clarify Stewart’s comments, said tire deflation devices “are considered a low-risk vehicle use of force.”

Nonetheless, the agency still refused to release the Starks major case file, citing its argument that the use of stop sticks in the fatal pursuit wasn’t force, until a letter from the World’s attorney.

“Currently, per OHP policy, if the case is not deemed a use of force, it does not automatically get referred to a command staff review or chief’s review board,” Stewart said.

Simply put, Stoughton said it’s a use of force when an officer attempts to use force and must be evaluated for appropriateness.

Use of force is the foreseeable effects — not actual effects — of an officer’s actions, he said.

For example, if an officer shoots at a person but misses, that is still a use of deadly force.

“When an officer swings a baton, it’s a use of force,” Stoughton said. “If an officer swung a baton and someone ducked and hit their head on a counter because they were ducking, you would say that that injury came about because of the way the person responded to the officer’s use of force.

“So you’d still have to ask, ‘Was the baton appropriate?’”

The pursuit raises questions about whether it was appropriate to engage in the chase, given the conditions and access to the vehicle’s location via a GPS tracker.

Geoffrey Alpert is a University of South Carolina professor who has researched high-risk police activities for more than three decades.

Alpert said data from and reviews of StarChase — a company that produces GPS devices officers can shoot onto vehicles — show the safety and apprehension benefits of using technology rather than pursuing.

“The whole point of tagging and tracking technology or the use of a helicopter during a chase is so the ground units will back off and the suspect will feel safe and slow down,” Alpert said.

Chuck Wexler is the leader of Police Executive Research Forum, a Washington, D.C.-based independent think tank of law enforcement officials whose first guiding principle for officers is the sanctity of human life.

“Can you get them another time coming out of their house? Is this a violent crime? Are there other alternatives? Is this person a danger to others?” Wexler said. “It all revolves around everyone going home safe at night — the officer, the suspect and the (public).”

OHP policy dictates that vehicular pursuits must “promote the safety of all persons” and be an “effective use” of resources.

In general terms, it requires chases to be “immediately terminated” if danger to the public, troopers or suspects is greater than the value of apprehension based on known offenses. The policy doesn’t meaningfully distinguish a difference from low-level crimes and traffic infractions to violent crimes.

Background on this series

Stolen property or traffic infractions prompted 14 of 15 Oklahoma Highway Patrol vehicular pursuits that killed 18 people since May 2016. At least eight of those killed weren’t the eluding drivers; they were uninvolved motorists, passengers and an OHP lieutenant.

If a violent crime isn’t involved — eluding itself doesn’t count — then chases aren't worth their risks and alternative methods to apprehend, such as GPS, should be utilized, according to some national policing researchers and strategists. OHP’s own policy mandates that chases be terminated when dangers outweigh the benefits of apprehension based on the known offense(s).

Oklahoma’s ranking in law enforcement pursuit-related deaths per capita was 11th highest in the nation from 1996 to 2015, according to a U.S. Department of Justice report published in 2017. The state ranked No. 5 worst in the U.S. from 2016 to 2019, according to a Tulsa World analysis of National Highway Traffic Safety Association data.

An Oklahoma Highway Patrol dashcam image shows a vehicle that crashed and rolled after swerving to avoid a spike strip in November 2019 near Stroud.