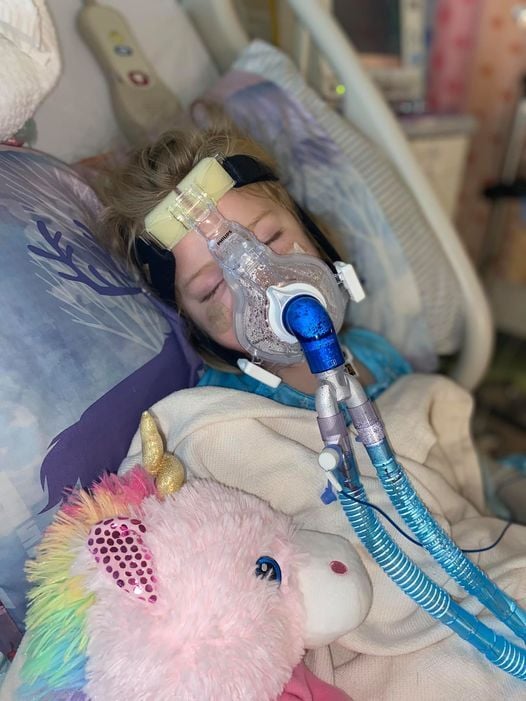 Aurora Cannon, 3, is battling COVID-19 in The Children’s Hospital at Saint Francis. Her mother, Amelia Cannon, is a registered nurse in the Saint Francis emergency room who believes she contracted the virus at work about three weeks ago and spread it to her family. 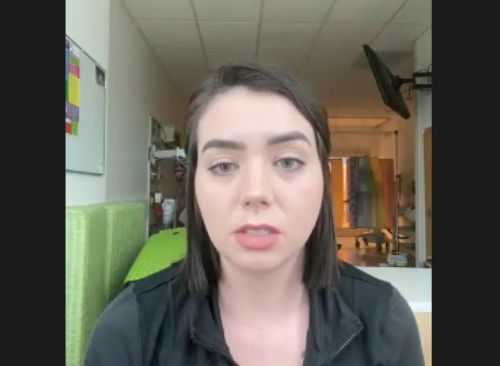 Frontline healthcare workers were hailed as heroes when the coronavirus first gripped the planet in early 2020.

But by the time the delta variant resulted in a sudden, devastating surge in hospitalizations in summer 2021, local doctors and nurses said politicization and disinformation campaigns against face masks and COVID-19 vaccines had people in their own communities and even families questioning the validity of their expertise and first-hand knowledge of the situation.

Enter Amelia Cannon, then a registered nurse in the emergency room at Tulsa’s Saint Francis Hospital, whose gripping Facebook posts in August became a wake-up call that went worldwide.

Read the rest of the story here.

The mother of one of the youngest critical COVID-19 patients treated at the Children’s Hospital at Saint Francis has a message for the unvaccinated.

Because she is a registered nurse in the emergency room there, and she believes she gave her 3-year-old daughter the virus after contracting it from one of the many unvaccinated patients she has treated recently.

On Aug. 12, she took to Facebook, emotionally exhausted and, yes, angry.

“I don’t normally speak on topics like this, but I feel that something needs to be said,” Amelia Cannon wrote late on her daughter’s second night in the hospital. “So forgive me, but I am angry. I am angry that I have done EVERYTHING right. Angry that I come to work and exhaust myself to treat unvaccinated patients. Only to bring it home to my babies. Can you imagine my frustration? My guilt? My fear?”

In addition to her Emergency Department duties, Cannon has been working in COVID patient rooms more frequently of late because of the surge in cases.

“Shortly after a few of my shifts in the COVID rooms, I started feeling ill, but of course I had already come home with my family and exposed them,” Cannon said Friday during a videoconference interview with local reporters from her daughter’s room in the Pediatric Intensive Care Unit.

One by one, each member of Cannon’s household became symptomatic. A few days after Amelia, it was Aurora, 3. Then about a week into the ordeal, it was Amelia’s husband, Kyle, and their 1-year-old daughter Alice’s turn.

Kyle and Alice had only mild symptoms for a few days, which Amelia attributes to her husband being vaccinated and to Alice likely having some immunity as a result of still being nursed by a vaccinated mother.

While Amelia’s symptoms were more intense, she, too, felt better after a few days.

But a week after becoming symptomatic, Aurora took a turn for the worse, and her parents called paramedics to their Fort Gibson home.

“She was very lethargic. We could barely keep her awake. She had a fever of 104 to 105. They agreed with us that her vital signs didn’t look good and she needed to be brought in,” Cannon recalled.

Upon admission, the toddler had a fever of 106.8 degrees, a heart rate of 165 and a case of COVID pneumonia.

Still, Cannon said doctors initially thought strong antibiotics and a couple of days of supplemental oxygen would have her on the mend.

But Aurora’s blood oxygen levels began dropping precipitously with the smallest of body movements. Things went from bad to worse late this week when she woke up from a nap and went into sudden respiratory distress.

That’s when she was transferred to the pediatric ICU and placed on BiPap, or bilevel positive airway pressure. It’s a form of noninvasive ventilation therapy used to facilitate breathing.

Canon posted a video Thursday of Aurora’s rapid, shallow breaths and scared, exhausted eyes behind the apparatus strapped to her face, and it started going viral.

She said her training and her own experiences as a nurse have been kind of a blessing and a curse during this ordeal.

One benefit is the ability to have actual medical discussions with her child’s physicians, but even they haven’t seen many bad cases in children as young as Aurora.

“Normally, their COVID kids are like middle school, teenagers, a little bit older kids,” Cannon said. “Clearly, the delta variant is attacking an even younger population.”

Aurora doesn’t have the distinction of being the youngest patient in Saint Francis with a serious case of COVID right now.

The downside of Cannon’s being both a nurse with COVID experience and a mother to a COVID patient is her acute level of awareness and understanding of what has been unfolding over the last nine days.

“Emotionally, it’s obviously the hardest thing I’ve ever had to watch,” Cannon said. “You can talk to a middle schooler and you can tell a teenager, `Look, this is what you need to do to get better.’ But to a 3-year-old, it’s just confusion and fear. She doesn’t know why she can’t go home. She doesn’t know why her family can’t be here with her.

“Sometimes I wish I was completely clueless so I didn’t know what could happen.”

As for the thousands of comments she has received on her Facebook posts, Cannon said she is reading them during the sleepless nights at her daughter’s bedside.

She is overwhelmed by the outpouring of kindness by strangers and her family and friends, who launched a GoFundMe campaign for medical expenses and a Meal Train for her family at home.

But what Cannon mostly wants is for her cry for help from Aug. 12 to be heard loud and clear by as many COVID vaccine holdouts as possible:

“I understand you’re concerned about the vaccine. Trust me, I GET it. It’s unfamiliar to you. But I know dozens of people that will answer any and all questions that you have, myself included,” she wrote. “So PLEASE. Educate yourself. And make better choices. For yourself and for everyone else around you. My babies included.”

C&B Welding and Fabrication in Sand Springs functioned as a main storage and shipping point for stolen merchandise, and Suburban Revival Boutique in Sand Springs was used to store and prepare stolen items for resale, a federal indictment alleges.

The case spike comes during a week in which the entire school district ultimately ended up in distance learning.

Gary Watts, whom the school board approved Monday as the district’s interim CFO and board treasurer, previously held the CFO post from 2006 until 2016 and had recommended Morris' hiring.

Attorney General John O’Connor says individual rights, a faith foundation, and capitalism and the free enterprise system are under attack.

In Sand Springs, a record 399 COVID-19 infections were reported, up 192 cases from the 207 infections reported just one week prior.

All Sand Springs Public Schools sites are switching to distance learning on Thursday and Friday.

The testing will tell blood donors whether their COVID antibodies come from natural infection or from the vaccine and boosters. OBI will hold two Sand Springs blood drives this month.

Aurora Cannon, 3, is battling COVID-19 in The Children’s Hospital at Saint Francis. Her mother, Amelia Cannon, is a registered nurse in the Saint Francis emergency room who believes she contracted the virus at work about three weeks ago and spread it to her family. 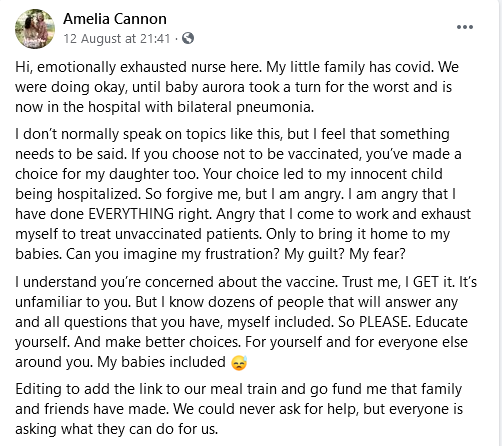 “If you choose not to be vaccinated, you’ve made a choice for my daughter, too. Your choice led to my innocent child being hospitalized,” Amelia Cannon wrote in an Aug. 12 Facebook post.

Frontline healthcare workers were hailed as heroes when the coronavirus first gripped the planet in early 2020.

But by the time the delta variant resulted in a sudden, devastating surge in hospitalizations in summer 2021, local doctors and nurses said politicization and disinformation campaigns against face masks and COVID-19 vaccines had people in their own communities and even families questioning the validity of their expertise and first-hand knowledge of the situation.

Enter Amelia Cannon, then a registered nurse in the emergency room at Tulsa’s Saint Francis Hospital, whose gripping Facebook posts in August became a wake-up call that went worldwide.

Read the rest of the story here.