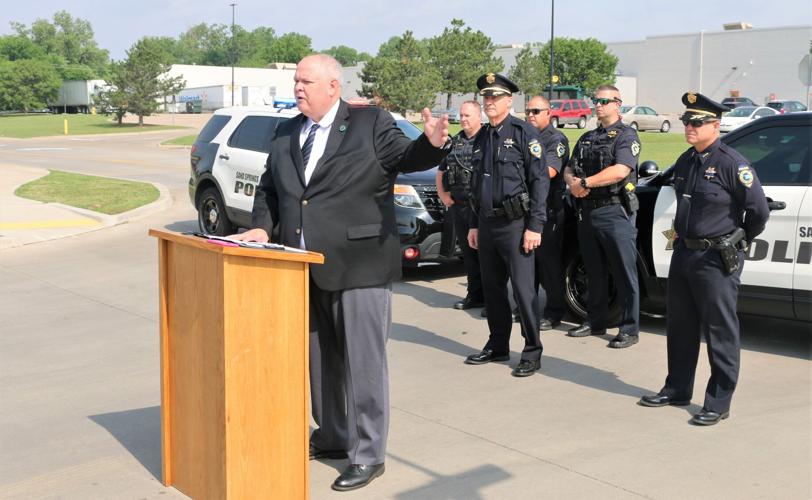 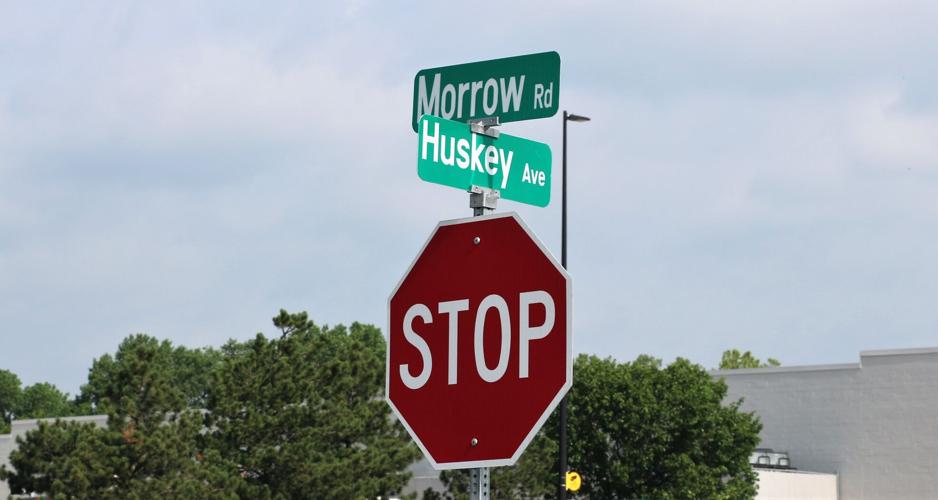 “We very much want to let the words ‘we will never forget’ be known. This is still our commitment,” City Manager Mike Carter said. 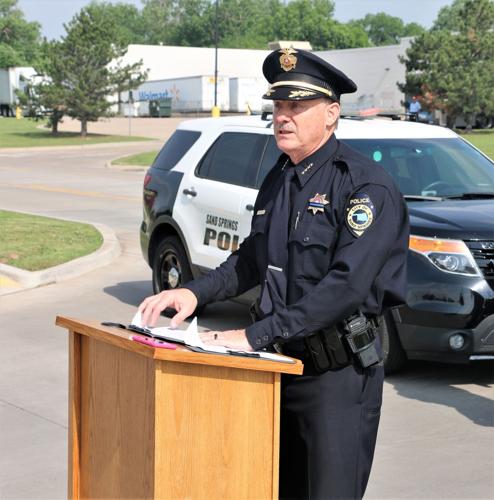 Police Chief John Mars called Friday’s ceremony “an opportunity to see the honor and respect brought to a fallen officer that perhaps was overlooked over the years." 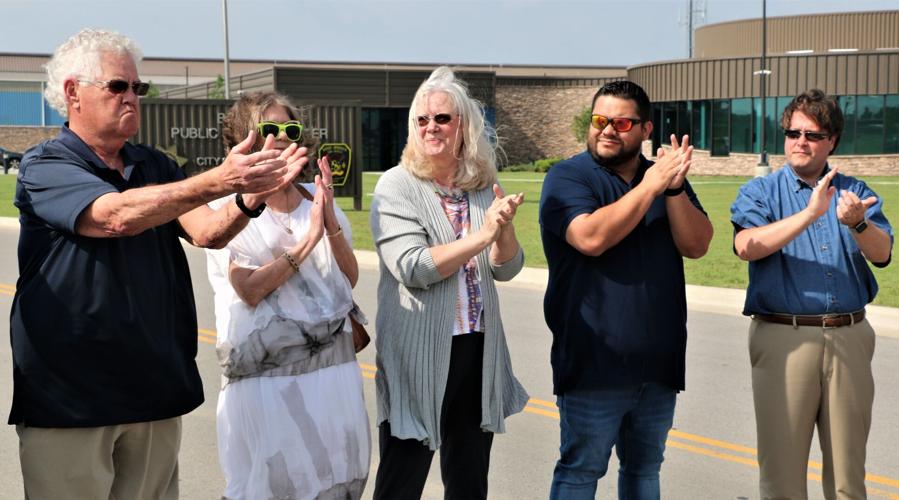 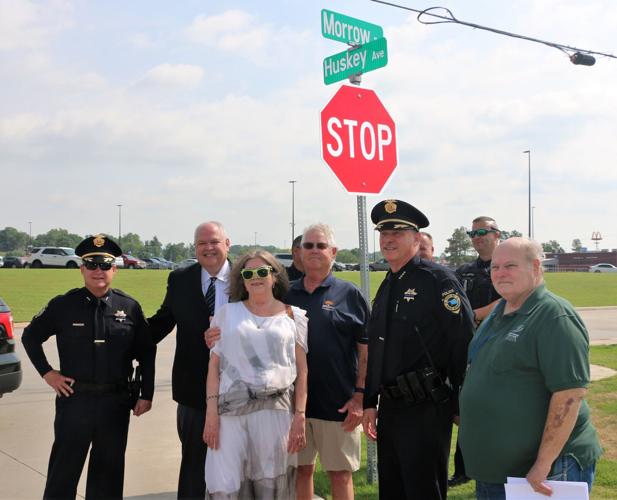 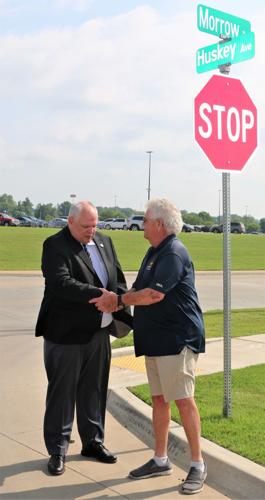 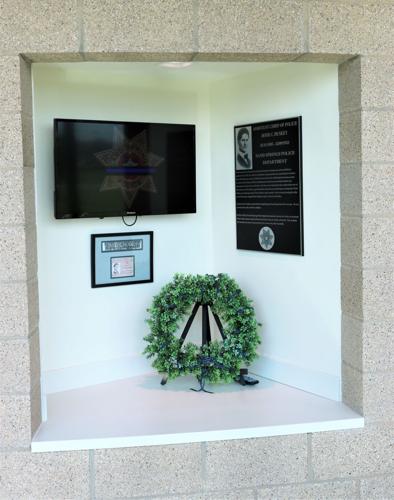 The younger man never even got to know very much about his grandfather because his father didn’t talk about him a lot.

But Hunter Huskey, now 71, was standing in the hot, whipping wind outside the Billie A. Hall Public Safety Center on Friday to pay tribute to the man he never knew.

And he wasn’t alone.

City and Sand Springs Police Department leaders were there to name the road that runs in front of the Public Safety Center as Huskey Avenue, an honor that they said was perhaps overdue but nonetheless heartfelt for the only police officer in the city’s history to have been killed in the line of duty.

Jesse Huskey, Sand Springs’ assistant police chief, was patrolling the streets near the MK&T railroad with his partner, Officer George Burkett, late on the night of Dec. 9, 1933, following some petty thievery the previous week at the nearby Minton Flour Mill, according to Tulsa World reports published the following day.

When the officers encountered three men, they called out to them, but the men fled to a small outbuilding at the rear of the mill, the newspaper reported.

“As the officers approached, they were met by a fusillade of bullets, Huskey falling dead in the battle, shot through the heart,” the World reported.

Huskey, 48, had lived in Sand Springs for 15 years and had been a police officer since the previous May. He was survived by his wife, Leva Huskey, and three children.

Although three brothers — Sam, Bill and Joe Russell — were apprehended and tried for murder, they were acquitted in September 1936 amid accusations of bribed and threatened witnesses, changed testimony and lost evidence.

“But when the war ended, my dad said, ‘I’m going back to Oklahoma, where I can hunt and fish.’

“He was the only one who came back here,” said Hunter Huskey, who was born in Tulsa and lived there until 1985, when he relocated to Norman.

“I’m very honored to be here,” he said Friday.

“It makes me proud, and I know he’d be proud, too,” he said of his grandfather. “The city of Sand Springs and the Police Department have been so good to honor my grandfather, and it makes me very proud.”

Huskey said his father didn’t talk about his own father’s slaying, guessing that it was perhaps too painful.

“We knew what the situation was,” he said. “I think my father was probably 15” at the time his father was killed.

“It wasn’t something that was discussed a whole lot,” Hunter Huskey said, “but before my father passed, we’d be invited to the various police memorial services that are held annually, and we’d attend those together, so I know he was very proud, too.”

Sand Springs Police Chief John Mars pointed out Friday that a portion of the Billie A. Hall Public Safety Center was designed specifically to display a memorial plaque, wreath and photos of Assistant Chief Huskey.

“And today, in his honor, we’re naming the street right here in front of the police building” for him.

He called Friday’s ceremony, held in conjunction with National Police Week, “an opportunity to see the honor and respect brought to a fallen officer that perhaps was overlooked over the years. We’re excited to do this.”

Even so, City Manager Mike Carter, who served with the Sand Springs Police Department for 28 years, the last six as its chief, said he hopes it’s the last time city and police leaders gather for such a commemoration.

“We hope that in this National Police Week that this is never repeated,” he said. “We hope that there’s never another celebration of someone’s life (given) in the defense of our city.”

That doesn’t mean such sacrifice isn’t remembered and revered.

“We very much want to let the words ‘we will never forget’ be known. This is still our commitment,” Carter said.

“Our City Council named the Billie A. Hall Public Safety Center for a war hero; somebody who gave his life in the protection of our country.

“And today we dedicate a road in the name of somebody we will also never forget, Assistant Chief Huskey, who gave his life in defense of Sand Springs.”

“When you go through a period of time in our country when cops are looked down upon and it’s hard to hire police officers, it brings it home to us,” he said.

“Even though we’ve got the support of our community here, we still feel the stigma of what (law enforcement officers elsewhere) are having to deal with.

“And it hurts us, because we consider ourselves good, decent people trying to provide a service to our community that most people won’t do,” Enzbrenner said. “And so when one of us is hurt — when one of us is killed — we feel that.

Case Community Park fireworks to blast off at 9:20 p.m. Sunday

The Independence Day celebration will kick off at 6 p.m. with food, games, fun and music.

The permits cost $20 and allow the bearer to discharge fireworks within the city during certain hours on July 3-4.

The Veterans Alliance Corps of Sand Springs, a new nonprofit entity made up of four well-known organizations, including the American Legion, will operate the former senior citizens center at 205 N. McKinley Ave. as a veterans center.

Renfrow, of Sand Springs, took an early lead in the Republican primary, ultimately receiving 37.6% of the vote, but Staires, of Skiatook, was never far behind and ended up winning 26.1%.

The first three sailed through easily, but the fourth barely squeaked by at 51.6% to 48.4%.

Active COVID cases up 250% since end of May, officials say

COVID-19 infections across Oklahoma for the week ending June 25 were up by more than 2,600 cases.

A Sand Springs woman was too smart to fall prey to the scheme, but officials are warning others to beware.

Sand Springs school district named the Best in the Burbs

The municipal redistricting process is legally required after each decennial Census.

“We very much want to let the words ‘we will never forget’ be known. This is still our commitment,” City Manager Mike Carter said.

Police Chief John Mars called Friday’s ceremony “an opportunity to see the honor and respect brought to a fallen officer that perhaps was overlooked over the years."