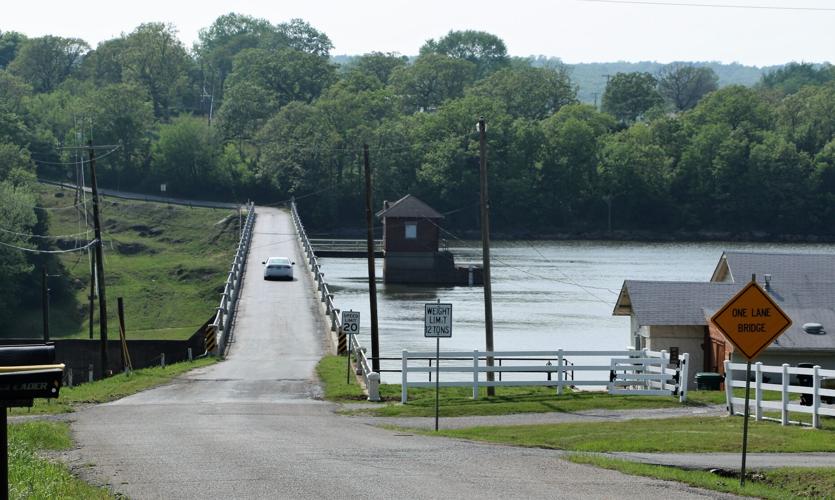 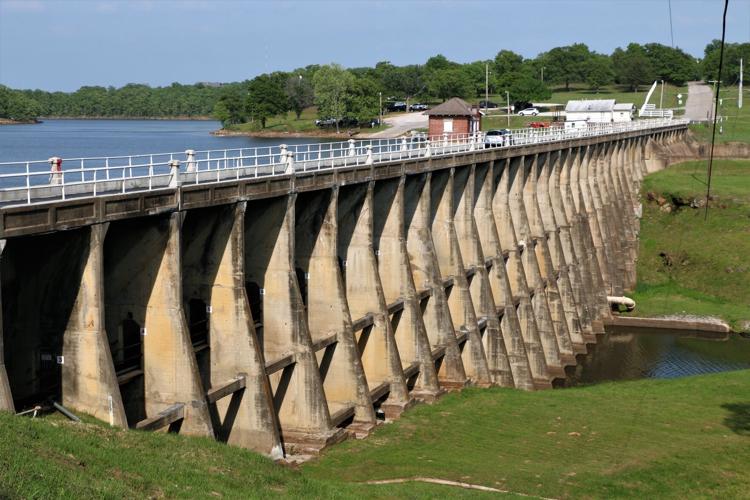 The century-old Shell Creek Lake Dam, owned and operated by the city of Sand Springs, is among 35 poorly rated, "high-hazard" dams in the state, but City Manager Mike Carter said area residents should rest assured that the city is constantly monitoring the dam and taking all appropriate measures when needed. 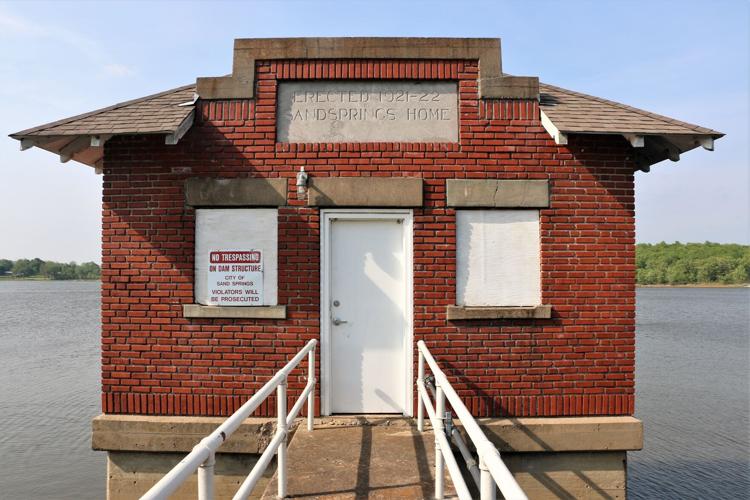 The Shell Creek Lake Dam was completed in 1922 as a water source for the city of Sand Springs. 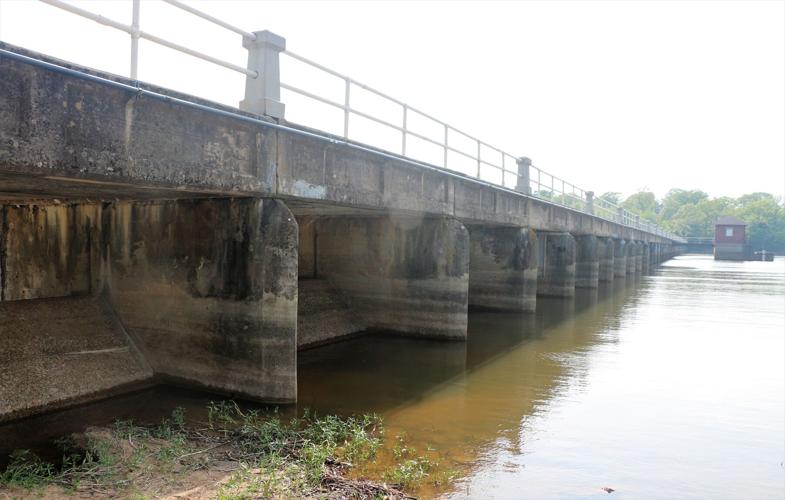 The 100-year-old Shell Creek Lake Dam might be showing its age, but officials say there's no indication of imminent problems. 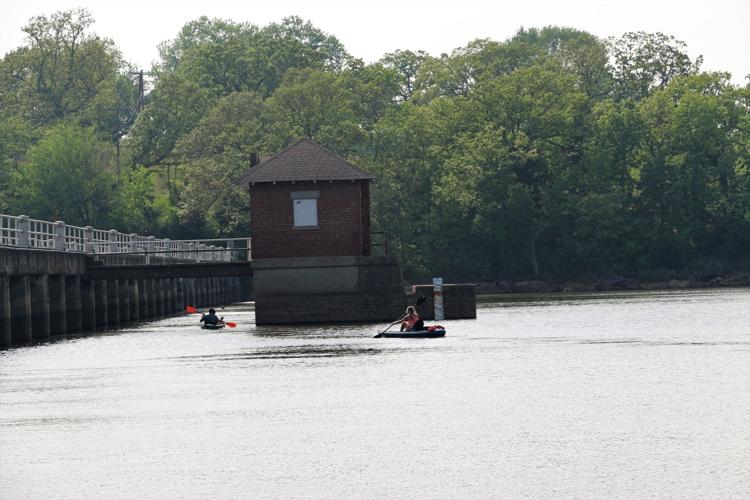 Kayakers enjoy a pleasant Sunday afternoon near the dam on Shell Creek Lake.

The number of Oklahoma dams in “high hazard” areas — places where their potential failure would likely threaten human life — that are listed in poor condition has nearly tripled in three years, an analysis of federal data indicates.

The century-old Shell Creek Lake Dam, owned and operated by the city of Sand Springs, is among those poorly rated dams, but City Manager Mike Carter said area residents should rest assured that the city is constantly monitoring the dam and taking all appropriate measures when needed.

“If we ever got information that it was a danger to people — that something was imminent — we would do whatever was necessary and appropriate,” he said.

Data from the U.S. Army Corps of Engineers National Inventory of Dams this year shows that of the more than 5,000 dams in the state, 35 were rated as poor or worse and were located in “high hazard” areas, where loss of life would be probable in the event of a failure, a Tulsa World analysis shows.

In 2019, the last time the World analyzed state dam condition numbers, only 13 dams deemed a “high hazard” in the event of failure were rated as poor.

The increase in the number of dams in poor or unsatisfactory condition could be linked to a toughening of inspection criteria, according to Zachary Hollandsworth, Dam Safety Program manager at the Oklahoma Water Resources Board.

“I’ll say we’ve been a little stricter with our condition assessments lately,” he said in a Tulsa World interview.

A poor condition rating for a dam can occur for a variety of factors, including the need for more information about a structure, Hollandsworth said.

“We’ll oftentimes assign a dam a poor condition if there needs to be more studies conducted to know what’s going on,” he said.

Carter said the 65-foot-tall, 757-foot-long concrete Shell Creek Lake Dam, which was completed in 1922, is routinely monitored by the city of Sand Springs.

The structure is inspected twice a year — once as a dam and once as a single-lane bridge, he said.

In addition, a caretaker lives right on the edge of the dam in a city-provided house.

“If we ever saw any signs of problems, we would take some action,” he told the Sand Springs Leader. “I don’t have a letter from the state saying, ‘You’ve got to do something about your dam.’

“That being said, that’s why we do these inspections.”

Carter confirmed that the state has tightened the definitions and criteria for assessing the condition of dams, but with regard to the Shell Creek Lake Dam, “I think a lot of it is about the age,” he said.

“Everybody’s been cognizant that this is a 100-year-old dam.”

With age being a contributing factor to dam failure, Carter said the city isn’t waiting for a catastrophe to take action.

“One of the things that we’re probably planning is closing the dam to large trucks and other heavier vehicles,” perhaps this year, he said.

“Obviously that’s one of the things that could cause stress on the dam.”

Carter said an overhead structure of some type likely would be installed to prevent larger vehicles from accessing the bridge.

Dam failures, even small ones, are not unheard of.

Last May, a 10-by-20-foot hole emerged under the concrete spillway near the top of the Lake Waxhoma Dam near Barnsdall, an earthen dam completed in 1955.

Osage County Emergency Management officials said water was coming out under the spillway, not over the top of it.

Army Corps of Engineers and Oklahoma Water Resources Board teams pumped water out of the lake until the level was below the breach and then made temporary repairs while working on a permanent solution.

Carter said lowering the water level at Shell Lake could be another mitigation possibility to reduce stress on the dam if needed.

“We could perhaps put in a bigger bypass system to take pressure off when we get heavy rains,” he said, adding that “all of these things are still under study and being discussed with our engineering staff.”

And while prevention is important, so is preparation for worst-case scenarios. That includes notifying people in harm’s way at a time when seconds can count.

“There are people that live downstream from our dam,” Carter said, “so we’ll probably install some sort of warning mechanism, like a siren, (that would sound) if there were a structural failure.”

For city officials, finding ways to coexist with an aging, potentially dangerous dam is all in a day’s work.

For example, Carter said, a new waterline that’s likely to be installed in connection with development around the airport won’t be affixed to the side of the Shell Creek Lake bridge, as is often done, because water is heavy, and that would add significant stress to the structure.

Instead, he said, crews will likely have to run the line underground nearby.

With regard to limiting large, heavy traffic across the dam, city officials expect to coordinate with Sand Springs and Anderson school district officials about whether any school buses travel that route and what alternatives are available.

Ultimately, if necessary, the city could close the portion of Shell Creek Road that runs across the top of the dam. But Carter is hopeful that it won’t come to that.

“It’s not heavily traveled,” he said, “but I think it would inconvenience people if we completely shut it down.”

One option that’s really not on the table, however, is replacing the dam, because the cost would be astronomical, he said.

“Just on a day-to-day basis, there are things we have to be cognizant of,” Carter said. “There’s nothing to suggest a direct, imminent threat to the dam, but we will still do things in the short term to relieve stress off of it.”

Photos: Flooding on May 27, 2019 along Riverside Drive, Sand Springs

Many of state's worst dams are nearby

Of the 35 dams rated as poor or unsatisfactory and considered a high risk for the loss of human life in the event of failure, eight are in the Tulsa region.

Of those, four are in Osage County, and a fifth is in Sapulpa in Creek County.

The dams, their owners and the counties in which they are located:

One new infection is reported at Limestone Technology Academy.

A federal jury found that Jeremy Nicholas Botonis, 44, sent hundreds of sexually explicit messages to a child and touched him in a sexual manner in 2019.

Ironman: It's about time to saddle up for Sand Springs competitors

For Parks and Recreation Director Jeff Edwards, Parks Operations Manager Joe Medlin and Public Works Director Derek Campbell, Sunday’s 140.6-mile Ironman triathlon will be the culmination of nearly a year’s worth of preparation.

Mayme Crawford is the recipient of the 2022 John M. Hess Municipal Award for Outstanding Citizenship.

Ironman training: 'The hay is in the barn,' so celebrate your hard work

Ironman columnist Jana Rugg tells competitors: You are getting ready to do something that fewer than 1% of people will ever do. Soak that in. Know that you are ready, and enjoy every minute!

Cody Worrell and Matt Barnett are sworn in as councilors, while Mayor James Spoon is re-elected and Councilor Wilson is chosen as the city's vice mayor.

“You may have missed out on a few days of in-person learning over the last few years because of floods, shutdowns, quarantines and snow days, but you have put more effort into owning the time you do have rather than mourning the time you’ve lost,” teacher Christy Bouchard told the graduates.

Ironman training: Get in the swim of things

If you’re gearing up for Ironman Tulsa, now is the time to get in the lake for open-water swimming practice, Jana Rugg says. Also, expect the water to be chilly.

The century-old Shell Creek Lake Dam, owned and operated by the city of Sand Springs, is among 35 poorly rated, "high-hazard" dams in the state, but City Manager Mike Carter said area residents should rest assured that the city is constantly monitoring the dam and taking all appropriate measures when needed.

The Shell Creek Lake Dam was completed in 1922 as a water source for the city of Sand Springs.

The 100-year-old Shell Creek Lake Dam might be showing its age, but officials say there's no indication of imminent problems.

Kayakers enjoy a pleasant Sunday afternoon near the dam on Shell Creek Lake.