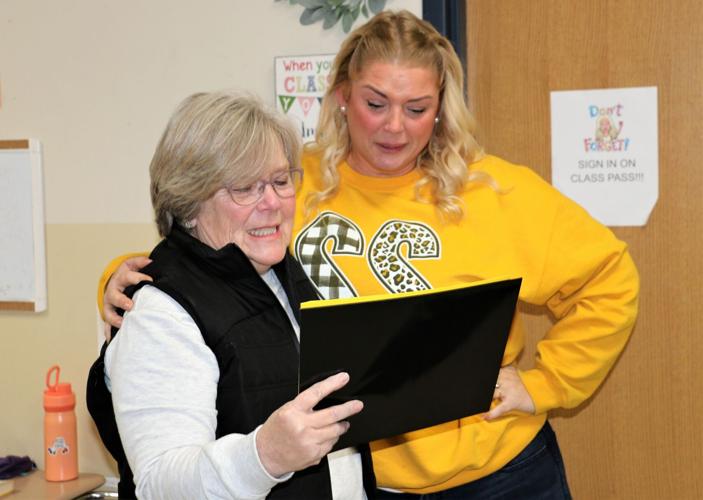 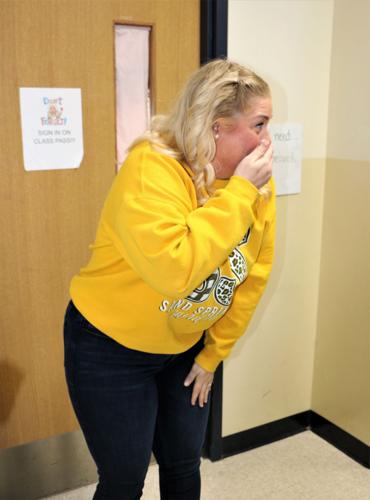 Sand Springs sixth-grade science teacher Sandy Gilstrap burst into tears, jumped up and down and screamed with joy Tuesday upon learning that she had won a grant to bring virtual reality headsets to her classroom. 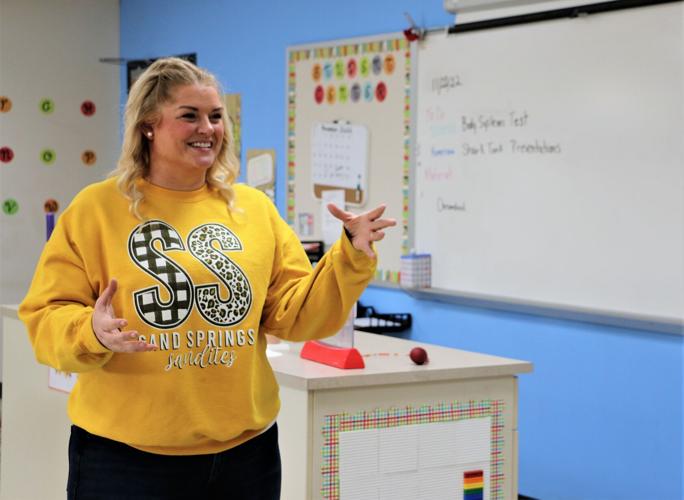 Sandy Gilstrap, herself a Sand Springs Public Schools alumna, says the Class VR virtual-reality learning system will allow her students to go, see and do like never before.

SAND SPRINGS — Sixth-grade science teacher Sandy Gilstrap answered the knock on her classroom door Tuesday morning with a degree of excitement that even a Publishers Clearing House sweepstakes winner would envy.

Gilstrap’s own version of a “prize patrol” filled the Sixth Grade Center hallway outside, with representatives from the Sand Springs Education Foundation, Sand Springs Public Schools officials and journalists on hand to witness the presentation of a grant for more than $18,000, one of the largest the foundation has given, to fund a virtual reality learning system for her classes.

Gilstrap instantaneously burst into tears and began jumping up and down.

Gilstrap will use the $18,799.98 grant to purchase Class VR, a set of 30 virtual reality headsets that will allow a classroom full of students to go anywhere, do anything, see anything — virtually.

“We’ll be able to not just look at cells but, like, go inside of cells and do hands-on virtual dissections and all kinds of stuff that we couldn’t normally do,” said Gilstrap, a Sand Springs Public Schools alumna who is in her 17th year of teaching.

She said Class VR comes with a library of about 15,000 lessons in a dizzying array of subject matter, a feature that will benefit not just Gilstrap’s students but others, as well.

“This is something not just for my class but for all of us to use,” she said, adding that the curriculum will “take our learning to a different level.”

And even to some different places. Although class field trips are more frequently falling victim to education funding woes these days, with the Class VR technology, students won’t be stuck in the classroom.

“With the click of a button, a teacher can send out from the (system’s) library a lesson … so we can all go on a field trip or do a dissection together,” Gilstrap said.

Better still, virtual reality allows students to take field trips to destinations no school bus can reach, such as inside the human body, making the abstract imaginable.

“What a way to make something memorable and stick,” said Gilstrap, who was the Teacher of the Year for the Sixth Grade Center last year and a finalist for the district Teacher of the Year. “We can stand there and talk at them all day, but to actually learn something you have to do it — to really understand it.”

Teams from the Sand Springs Education Foundation fanned out across the school district Tuesday to present grant awards totaling some $85,000 to 41 recipients, said Tirita Montross, the foundation’s executive director.

A committee reviewed the 50 applications that were submitted for the annual grants, for which any teacher in the district can apply, she said. Grants aren’t intended for furniture or building enhancements, and they’re not really awarded for day-to-day school supplies, either, Montross said.

“It has to be kind of a project” or something where “it’s going to last beyond just this year,” she said. “It’s usually a special project that they wouldn’t be able to get funded through the district.”

“It’s about getting creativity into the classroom,” Durkee said. “And I really don’t know of a profession that has more creative people than education. So they write some pretty phenomenal grant applications.”

As a 7-year-old, Sand Springs salon owner Jeanna Alexander had a speaking part in the Oklahoma-filmed “Where the Red Fern Grows.”

Even a grinch could find something to put him in the spirit of the season.

This year's parade will step off at 7 p.m. Friday, Dec. 2. The theme is “Christmas at the Movies.”

The Sand Springs wrestling team needs some good eats, and its Amazon Wish List makes it easy to help.

All key indicators of infection activity have moved the needle for the week ending Nov. 19, but only very slightly.

City Council Wards 3 and 4 and school board Office No. 3 will be on the spring ballot.

Beginning Wednesday, U.S. 412/Cimarron Turnpike is narrowed to one lane in each direction at Oklahoma 99 near Hallett until further notice.

A three-year term for Position No. 3 on the Anderson Public School board is up for grabs.

Sand Springs sixth-grade science teacher Sandy Gilstrap burst into tears, jumped up and down and screamed with joy Tuesday upon learning that she had won a grant to bring virtual reality headsets to her classroom.

Sandy Gilstrap, herself a Sand Springs Public Schools alumna, says the Class VR virtual-reality learning system will allow her students to go, see and do like never before.