Sand Springs Public Schools Supt. Sherry Durkee (left) and board president Whitney Wagers (right) present an award to Webco Industries Shelly Shoemaker for Webco’s partnership with the district. The Sand Springs-based tubing-solutions provider has donated more than $140,000 to the district over the past four years. 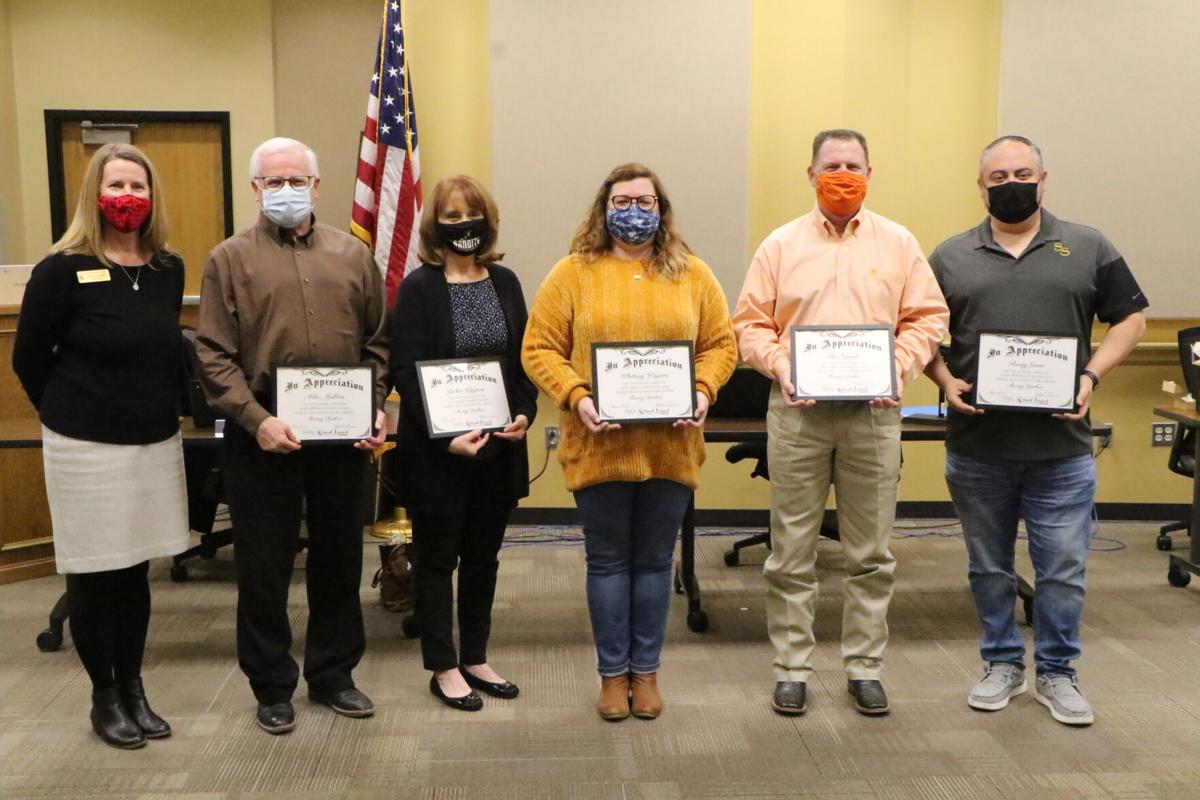 The Sand Springs Public Schools board of education officially approved its 2020-21 fiscal year budget on Monday, Jan. 4 during its monthly meeting.

Despite economic hardships for public schools nationwide, and more anticipated with state revenue sources beginning to be impacted by the COVID-19 pandemic, SSPS Chief Financial Officer Greg Morris announced the district had once again increased its prior year general fund balance.

The increased stockpile comes in spite of a stagnant total received through foundation and salary incentive aid, the district’s largest single general fund revenue source from the state. SSPS received $18,198,930 through the state in during the 2018-19 fiscal year, but $16,457,379 this year, a $1,741,551 decrease in funds.

“Supt. (Sherry) Durkee and I have worked together and made sure when we were doing well that we didn’t just go out and spend so we could that money in lean times,” Morris said.

In other business, the board recognized Webco Industries for their partnership with the district. Webco has donated more than $140,000 for STEM education for the past four years. Durkee and board president Whitney Wagers presented Shelly Shoemaker, Webco’s Talent Systems Manager, with an award of recognition.

Durkee also honored each of the five board members during the meeting in accordance with School Board Recognition Month in Oklahoma. Wagers, Vice President Mike Mullins, Deputy Clerk Rusty Gunn and board members Bo Naugle and Jackie Wagnon were each recognized with a framed certificate and a goodie bag.

Arrangements are entrusted to the care of Mobley-Groesbeck Funeral Service. A visitation is scheduled from 1-6 p.m. Sunday, Jan. 17 at the funeral home. A funeral service will be at 10 a.m. Monday, Jan. 18 at Broadway Baptist Church with Pastor Lee Herring officiating.

“It really motivated me. It was an eye-opener to look around because there are people in need all around us. I wanted to see if I could go sell something so I could give something else away.” - Troy Zickefoose

Sand Springs Public Schools announced its five finalists for the district’s 2020-21 Teacher of the Year award.

The latest COVID-19 update is available from the Oklahoma State Department of Health.

Get to know Rebecca Davis from Clyde Boyd Middle School, one of Sand Springs' 2020-21 Site Teachers of the Year.

The Sand Springs Chamber of Commerce is looking to make some changes going into the new year, focused on better serving its members and the bu…

Expectations for the new addition to the Sand Springs downtown triangle were somewhat high. Fortunately, a recent visit showed that said expectations were more than met.

Church That Matters has seen an explosion in need throughout the Sand Springs community over the past 10 months due to the pandemic.

Sand Springs Public Schools Supt. Sherry Durkee (left) and board president Whitney Wagers (right) present an award to Webco Industries Shelly Shoemaker for Webco’s partnership with the district. The Sand Springs-based tubing-solutions provider has donated more than $140,000 to the district over the past four years.