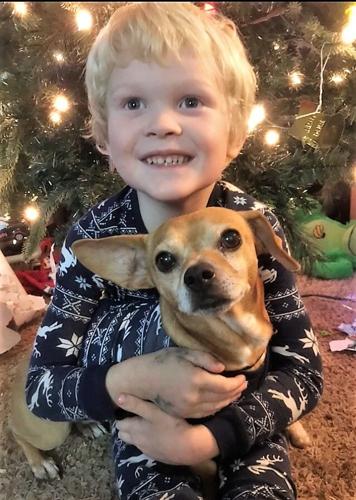 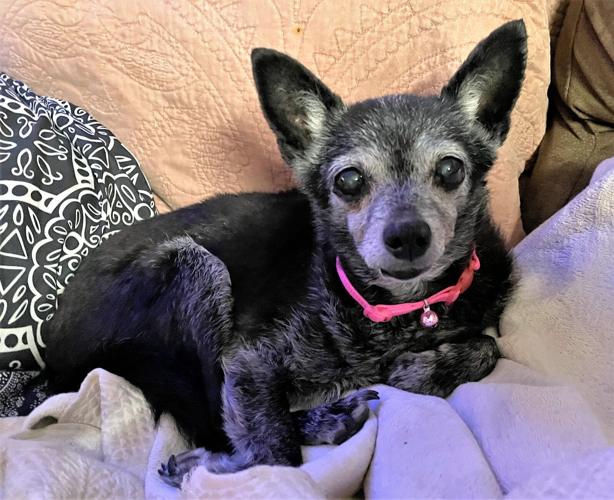 Lucille joined the family this summer, and despite being deaf and going blind, “she has just blossomed,” Lindsey Howard-Shaeffer said. 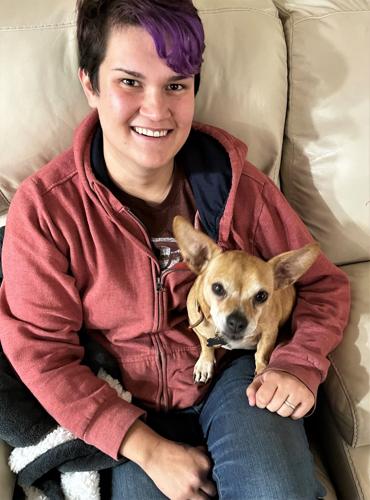 Lindsey Howard-Shaeffer says Hank, a senior dog she adopted from Sand Springs Animal Welfare, “has been stuck to my side ever since I got him.”

Any way you slice it, money is a major factor in pet ownership. And pets are expensive, no doubt.

On average, per surgical veterinary visit, dog owners spend $458 and cat owners spend $201, according to the Insurance Information Institute.

Lindsey Howard-Shaeffer, an animal lover who has had dogs all her life, said the reduced adoption fee made possible by the Bissell Pet Foundation was a deal-maker for her family in adopting their dog Hank from Sand Springs Animal Welfare a year ago.

The Bissell Pet Foundation sponsors regular “Empty the Shelter” events in which low-cost adoptions are offered to make pet adoption affordable for more people, which creates some breathing room for shelters.

The biggest of those campaigns, the annual “Empty the Shelters — Holiday Hope” event, starts Thursday and runs through Dec. 11.

Sand Springs Animal Welfare is among two agencies in the Tulsa area and five statewide that are participating.

During the nationwide campaign, adoptions will cost no more than $50 at any of 280-plus participating shelters in 42 states.

At Sand Springs Animal Welfare, adoptions will cost only $25, which includes spaying or neutering, vaccinations, parasite treatment, deworming, microchipping, and a tag and license. Adoptions usually cost $70 for cats and $85 for dogs.

“He’s been great,” she said of Hank. “He was having a hard time there. (A shelter is) not a great place for little dogs.”

“The $25 (adoption fee) made it a lot easier than it would have been,” she said. “That was one of the tipping points that got me to keep him. And he’s been my little buddy since then.

“He’s been stuck to my side ever since I got him.”

So much so, in fact, that her husband might have gotten just a bit jealous, Howard-Shaeffer said.

“So we adopted Lucille” over the summer, she said. “I told him, ‘You have to pick her up and drive her home so she’ll like you more.’”

Lucille’s teeth were so bad that they weren’t able to determine her age, but she is definitely a senior dog, Howard-Shaeffer said.

“She’s actually deaf, and her eyesight is going,” she said. “She’s probably the oldest dog I’ve ever had.”

Howard-Shaeffer said she has had to overcome her own aversion to loss and grief in order to adopt senior dogs, who tend not to be adopted from shelters as quickly as younger animals.

“I know it’s hard for me, but I want to be able to help,” she said. “Not a lot of people like senior dogs as much, but I’d rather have some discomfort while knowing I can help them and give them a good place to live and comfort, even if it’s not for long.

“Hank was dumped,” she said. “He deserves as long as I can give him.”

That means involving Hank in her life as much as possible. Howard-Shaeffer lives in Sand Springs but works in Tulsa at her father’s Amazon business and also babysits. Because Hank has such a great temperament and is good around kids, she said, she can take him to work with her.

She said she knew that about Hank from the start because the volunteers at Sand Springs Animal Welfare spend a lot of time getting to know the dogs in the shelter, figuring out what they need and where they would be the best fit.

“Breeders aren’t all they’re cracked up to be,” Howard-Shaeffer said. “They don’t pay as much attention to an individual dog’s temperament.”

Lucille “was scared of everything at first,” she said, “but she has just blossomed. Now it’s hard to get her to come inside sometimes because she can’t hear you calling her, and she’s just so happy.”

Bissell’s “Empty the Shelters” campaign has partnered with more than 5,700 shelters and rescue groups across the United States and Canada to help place nearly 126,000 pets in loving homes since the campaign’s inception in 2016, making it the largest funded adoption event in the country, according to the foundation.

The Bissell Pet Foundation was founded in 2011 by Cathy Bissell, and its work has touched the lives of nearly 590,000 pets to this point.

Cost: $25 adoptions at Sand Springs Animal Welfare; check with other shelters individually, but no more than $50 anywhere.

Most pet owners would probably tell you that their pets improve their lives. But scientific data actually show tangible health benefits of animal companionship.

According to the Centers for Disease Control and Prevention, pets can help manage loneliness and depression with their companionship.

Regularly walking or playing with a pet can decrease blood pressure, cortisol levels and triglyceride levels.

Animals can provide emotional support and decrease feelings of anxiety and symptoms of post-traumatic stress disorder.

Firefighters deployed a boat to cross Shell Lake and retrieve Merlin the Great Pyrenees, who went for a long walk in the opposite direction of…

A film about the integration of Charles Page High School will have its premier Feb. 18 at the Sand Springs Museum.

Event organizer Jamy Magee of the Parlour Hair & Ink in Sand Springs says the impact is worth any loss in revenue for the day.

Also, a Sand Springs 17-year-old was charged as a youthful offender on Friday with use of a vehicle to facilitate a shooting and a gang relate…

Lucille joined the family this summer, and despite being deaf and going blind, “she has just blossomed,” Lindsey Howard-Shaeffer said.

Lindsey Howard-Shaeffer says Hank, a senior dog she adopted from Sand Springs Animal Welfare, “has been stuck to my side ever since I got him.”