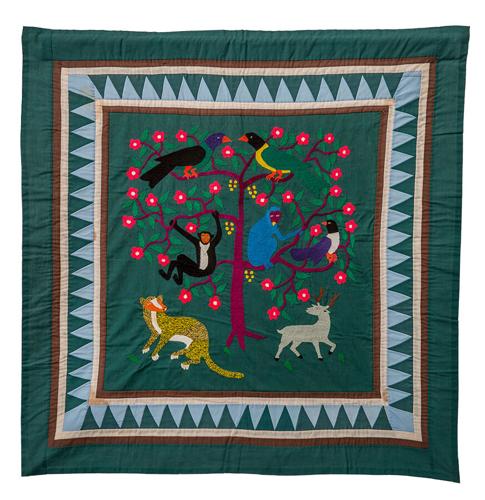 In traditional Hmong life in Asia, women produced complex clothing and other textiles that established clan identity through abstract geometric designs that often are inspired by nature. 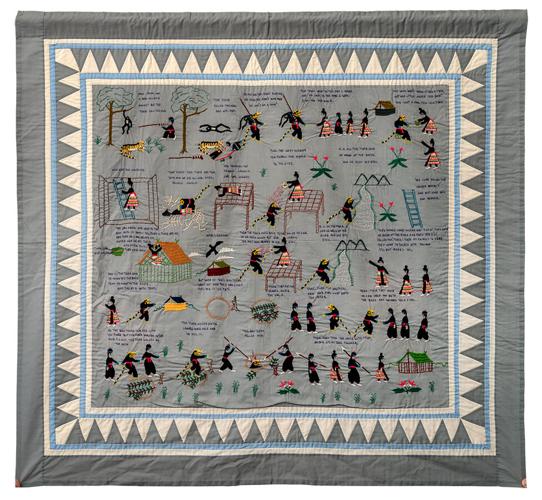 Escape narratives were the predominant theme of “story cloths” made in the Hmong refugee camps.

A new exhibit at the Sand Springs Cultural and Historical Museum illustrates how Hmong textiles changed as the Asian ethnic group, originally from China, then Laos, resettled in Thailand or allied countries such as Australia, France, Canada and the United States after the Vietnam War.

Today more than 300,000 Hmong live throughout the U.S., many in the central part of the country, with more than 5,000 in Oklahoma.

The exhibit “Cloth as Community: Hmong Textiles in America” includes 28 textile objects curated by Geraldine Craig, professor of art and associate dean of the Graduate School at Kansas State University, and Carl Magnuson, a cultural anthropologist.

It will be on display at the Sand Springs Cultural and Historical Museum through Oct. 20.

The story of Hmong textile production in the diaspora reflects the radical upheaval in the external environment that Hmong refugees experienced.

The designs from that time reflect a deep animist philosophy and are inspired by nature.

Historically, textiles in village life were not sold, but they were thought to hold important spiritual protections, so such things as colorful baby carriers and hats were designed to disguise children from evil forest spirits who might try to steal their souls.

In refugee camps and later the diaspora, the sale of textiles generated important income for families.

Escape narratives were the predominant theme of “story cloths” made in the refugee camps, revealing a new Hmong concern with geopolitical borders, since crossing the swift Mekong River to safety in Thailand was the route for most Hmong who left Laos.

Many Hmong drowned or were shot when attempting the crossing, and it became a central element in most early story cloths, as did the incorporation of first Hmong and then English text.

Yet, as the memory of the war receded and U.S. buyers wanted more optimistic or positive subjects, many of the story cloth subjects morphed into representations of a new life in America, such as a Nativity scene, or nostalgia for the pastoral life left behind — animals in a jungle, scenes of village life or illustrated Hmong folk tales with English text.

The works in this exhibition demonstrate a period in time when old patterns influenced new designs, often produced at a larger scale or with more space devoted to the triangular borders, and embroidered story cloths changed to fit a new market that was different from tourists or relief workers in the camps.

Admission is free, although donations are accepted.

The class had no teacher for several days at the start of fall classes and was being ‘neglected,’ he says.

The driver of the car and her remaining passenger have been released from the hospital.

Three Charles Page High School students who died Thursday in a car crash less than a mile from the Sand Springs school were remembered Friday with tears, gratitude and even laughter by friends and family members.

Limestone Technology Academy students mark a milestone in the monarch life cycle and see some bigger pictures along the way.

“Today our community has suffered a devastating loss. It is with heavy hearts that we confirm the passing of three Charles Page High School students who lost their lives in a traffic accident on the afternoon of Thursday September 15," Sand Springs Public Schools Superintendent Sherry Durkee wrote in a statement released later Thursday.

The city's animal shelter has been desperately over capacity for months, and the reduced-fee adoption event could make a big difference, officials say.

Jeff Edwards said he is “sad to leave a workplace where fellow employees really feel like close family members” but that the chance to lead Tulsa’s River Parks “is beyond exciting for me personally and professionally.”

The parade will step off at 6 p.m. Thursday. Downtown streets along the parade route will be closed from 5:30 to 7 p.m.

With the cutting of a ribbon, a promise is fulfilled: New Sand Springs Veterans Center is open for business

Among the host of dignitaries who turned out for the Veterans Center's grand opening were a number of veterans, to whom the mayor said, “This facility is here for you.”

Aspiring writers ages 8-18 are encouraged to submit a short story to any library branch location during the month of October.

In traditional Hmong life in Asia, women produced complex clothing and other textiles that established clan identity through abstract geometric designs that often are inspired by nature.

Escape narratives were the predominant theme of “story cloths” made in the Hmong refugee camps.