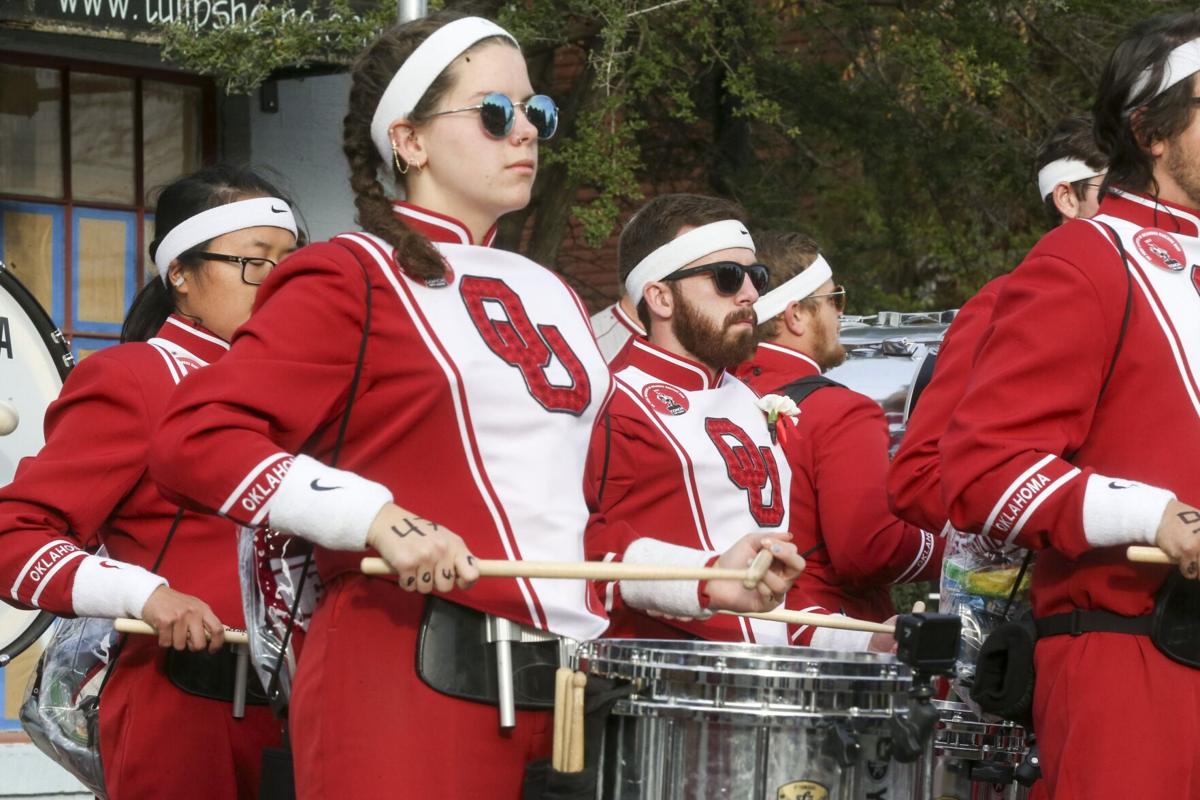 The Pride of Oklahoma marching band members Sara Nance and Carter Nance perform Saturday during a concert outside of Hideaway Pizza on Campus Corner in Norman before the Sooners’ last home football game. 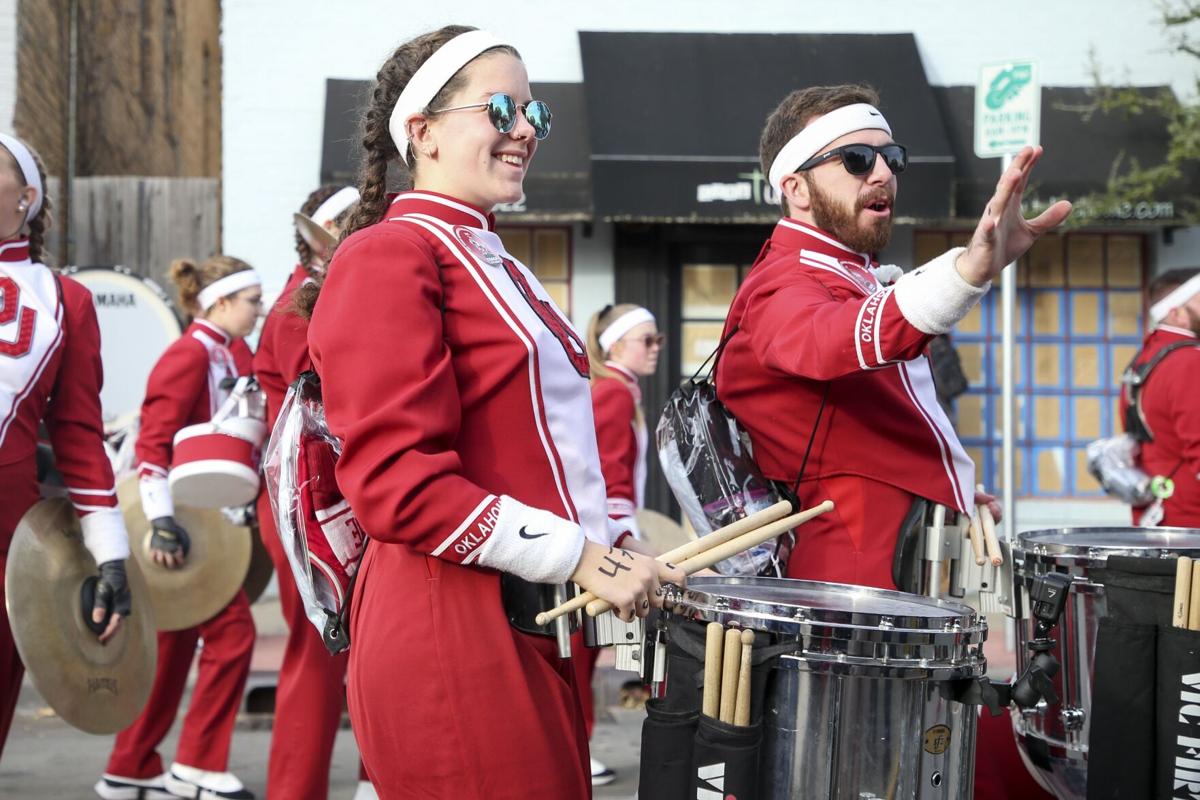 Sara Nance says her brother, Carter Nance, has “been a big influence. … He’s always been there for me, even in things beyond drum line." 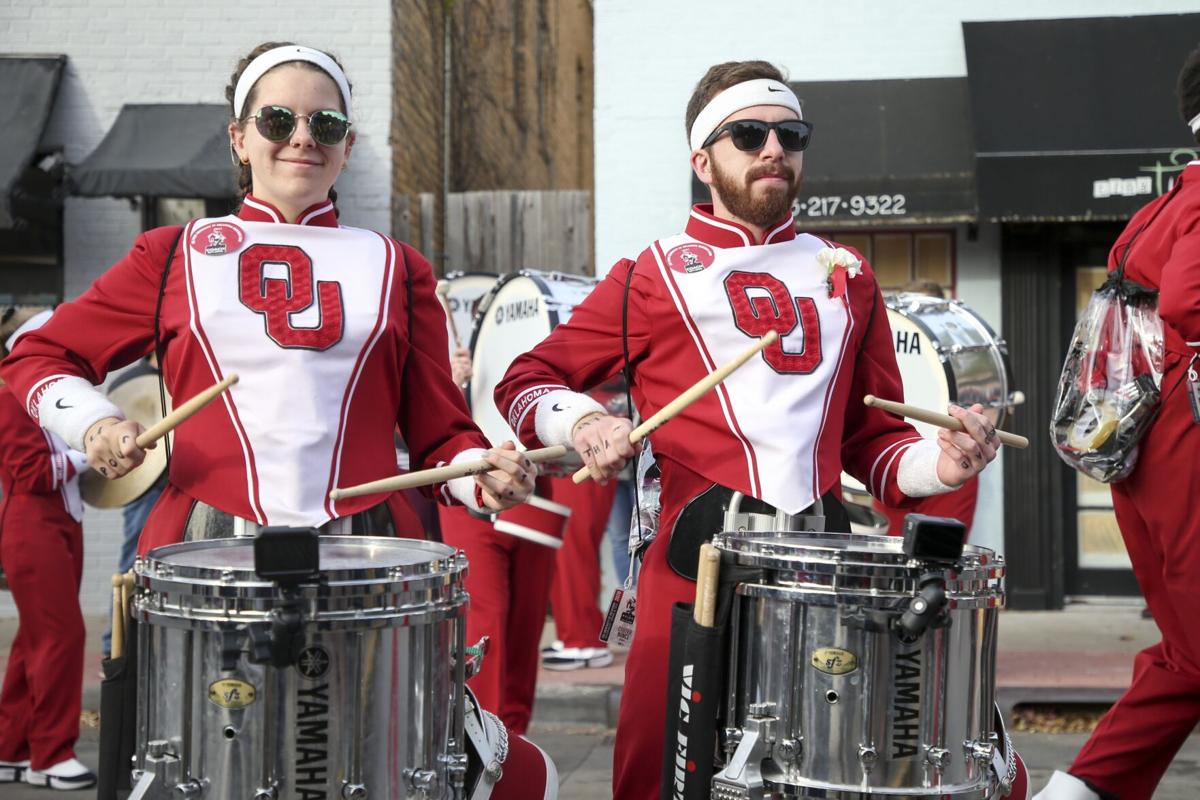 Sara Nance said of her brother and section leader, Carter Nance: “He’s harsh sometimes, but he really has pushed me to be better. If he hadn’t pushed me in high school, I probably wouldn’t be in the Pride now."

That two of the nine are Charles Page High School graduates — as well as siblings — is nothing short of astounding.

Their parents, Lori and Steve Nance, also attended Charles Page — she graduated in 1991 and he was in the Class of 1992.

And Steve Nance is a percussionist who once played for the Gold Pride marching band.

Younger sister Katie Nance, a junior at Charles Page, is in the band, and she plays — what else? — snare drum.

But it was Carter Nance, 21, who raised the bar on the family traditions when he decided to attend the University of Oklahoma and try out for the Pride.

Even so, he said, much of that is because of his father.

“I grew up an OU football fan,” he said. “Dad was always an OU fan. It just felt right” to go to OU.

He said it also feels right to have one sister — and possibly two — following in his footsteps.

“It’s a really cool feeling,” he said, “especially right now with being a senior at OU and getting to spend my senior year with Sara and then seeing Sara grow in her skills as a percussionist, too.”

For his part, Carter wasn’t always certain he wanted to be in the band in college. A business major, he was much more interested in what OU’s Price College of Business had to offer.

Steve and Lori Nance own Integrity Lighting, and Carter plans to have a career in lighting design, so a business degree made sense.

But an older friend told Carter about his experiences with the band, including attending football bowl games, and Carter “was hooked,” he said.

Besides his college marching career, which has included being the section leader last year and this year, he marched over the summer with the Spirit of Atlanta Drum & Bugle Corps.

The Spirit of Atlanta has competed through Drum Corps International since 1977 and has been a DCI top 12 finalist 20 times.

That experience “is definitely something I’m going to remember for the rest of my life,” Carter said.

Percussion won’t just be a part of his memories, though. Carter said he hopes to teach drums, either through private lessons or helping out at a school somewhere.

First, though, comes marriage. He and Abbagail Agan are planning a June wedding.

But as Carter Nance looks to his future after college, Sara Nance is trying to get used to the fact that her brother won’t be around next year.

“He’s been a big influence. Most of the bigger decisions I’ve made in my life have been with his help,” she said. “He’s always been there for me, even in things beyond drum line.

“I consider him one of my best friends.”

Her brother’s musical influence began at least as early as her sixth-grade year, she said, when she signed up for band and was trying to decide what instrument she wanted to play.

“I just kind of looked up to my older brother and followed in his footsteps,” she said. “He thought I would have more fun drumming.”

Sara, 18, said that influence continued when it was time to choose a college.

“I visited a lot of other colleges and toured them, but I will say that marching band had a big role in where I decided to go,” she said. “The experience of it at OU seemed like it would be a better fit for me.”

Surely taking orders from a section leader who’s also your older brother can be difficult, though, right?

“He’s harsh sometimes, but he really has pushed me to be better,” Sara said. “If he hadn’t pushed me in high school, I probably wouldn’t be in the Pride now.

“He’s been a great teacher over the past few years.”

Like her brother, Sara is also majoring in business at OU, but unlike him, she doesn’t know that she will do anything with music after college.

“I plan to own a coffee shop,” she said. “I’ve always loved coffee. I love the idea that people go there to study and hang out. I love the community feel.

“I want to be able to create a coffee shop that feels like home to other people.”

In the meantime, Sara hopes to revive the sense of home she has with the Pride’s drum line now in a couple of years, when it’s time for younger sister Katie to make a college choice.

“I think she’s looking at OU and likes the idea of being in Pride,” she said, “but it’s still early for her.”

The game would be Carter Nance’s last home performance with the Pride.

“It’s definitely very bittersweet,” he said. “I’m excited for it, but at the same time, I’m sad that it’s the last one.

“It’s been a really cool experience, especially performing with my sister.”

The closure is in conjunction with the $336 million extension of the Gilcrease Expressway west of downtown Tulsa.

The 5,830-square-foot gym and classroom facility will cost $943,581, money that has been socked away from proceeds of a dedicated public safety sales tax voters approved in 2015.

From a Christmas tree-lighting ceremony and the annual parade to a Noon Year's Eve balloon drop, the month's events offer something for everyone.

One confirmed COVID case was reported at Limestone Technology Academy, and a second was reported at the Sixth Grade Center/Clyde Boyd Middle School, according to data the school district released Friday.

The last time the city had a reporting period with no new deaths and a decline in active infections was in early June, data show.

The Billie A. Hall American Legion Post 17 in Sand Springs is partnering with Wreaths Across America to decorate more than 1,500 veterans graves at Woodland Memorial Park, but they need the community's help to buy the wreaths.

Scores of volunteers — some old hands and some newcomers — prepared, packaged and delivered more than 900 Thanksgiving meals across three area ZIP codes.

The Pride of Oklahoma marching band members Sara Nance and Carter Nance perform Saturday during a concert outside of Hideaway Pizza on Campus Corner in Norman before the Sooners’ last home football game.

Sara Nance says her brother, Carter Nance, has “been a big influence. … He’s always been there for me, even in things beyond drum line."

Sara Nance said of her brother and section leader, Carter Nance: “He’s harsh sometimes, but he really has pushed me to be better. If he hadn’t pushed me in high school, I probably wouldn’t be in the Pride now."