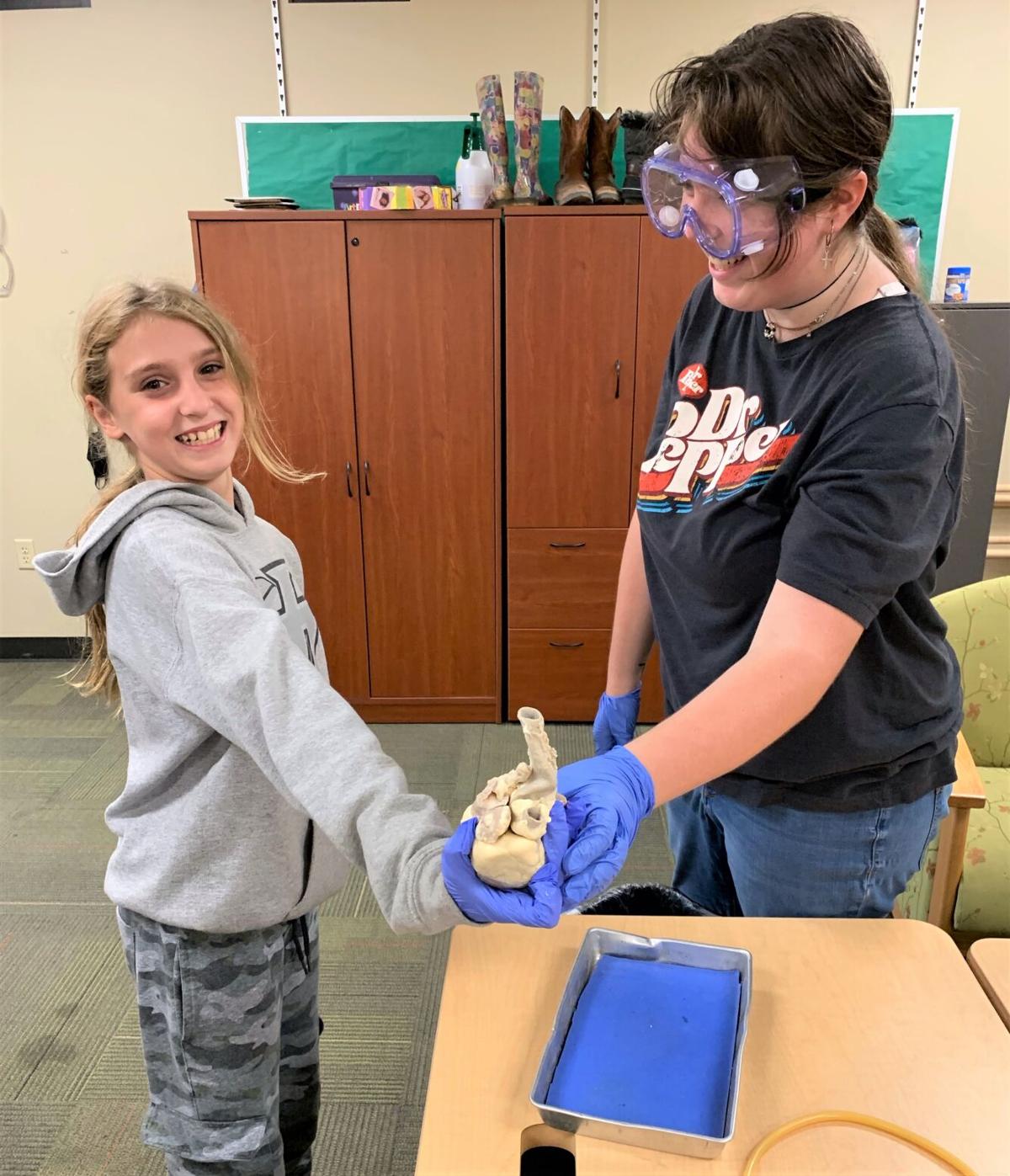 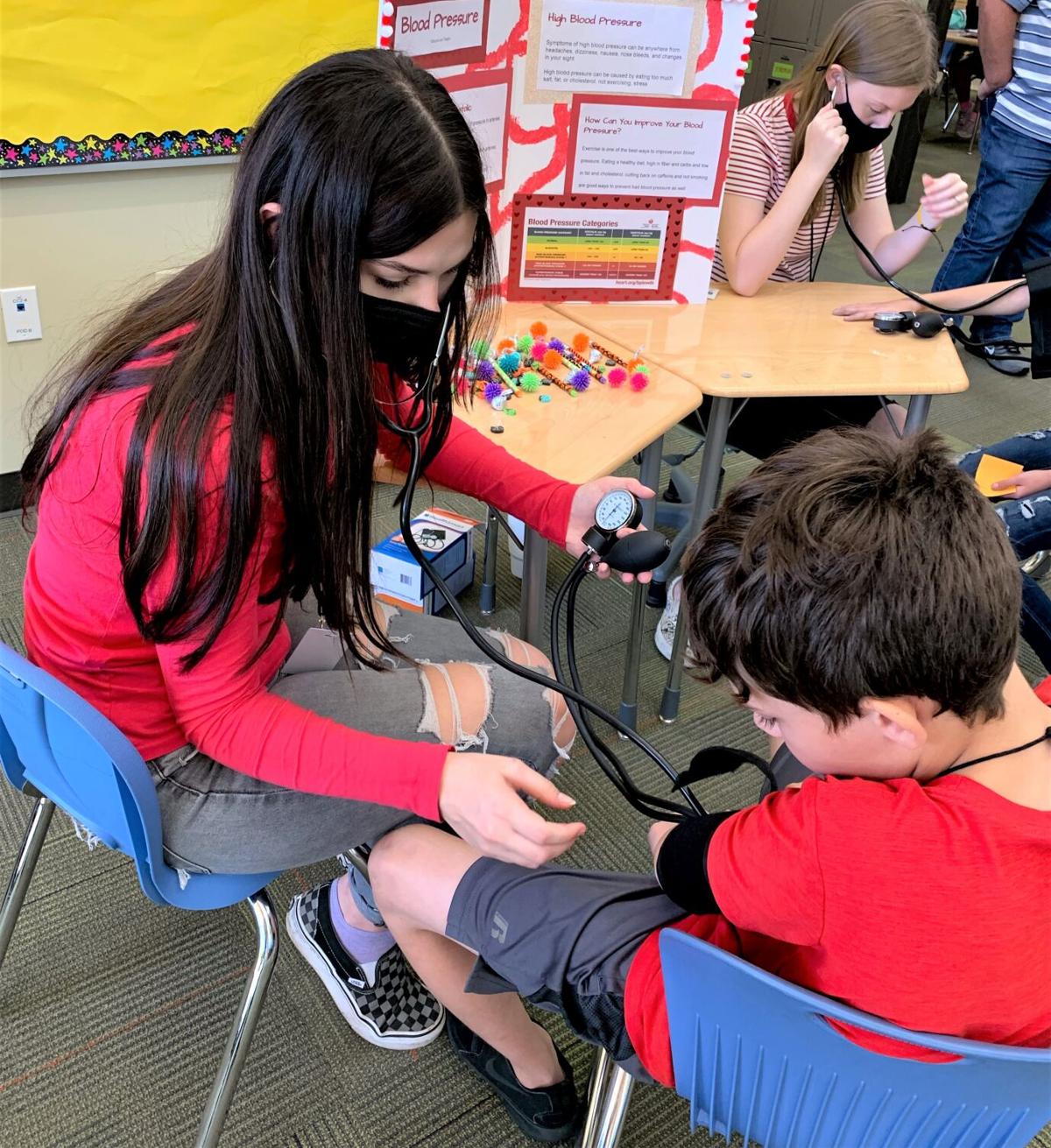 The high school students representing HOSA, along with their sponsor and teacher, Matt Watkins, led the fifth-graders through a series of rotations to learn about the heart, according to Amanda Webster, a fifth-grade teacher at Northwoods.

She said the younger students discovered that what they do through activity and while at rest affects the heart.

Students tried out a heart monitor, had their blood pressure taken, tested their grip strength, experienced a Doppler ultrasound, tried out a respiration belt and even got to dissect an animal heart.

“Some of the kids were a little freaked out by the heart, honestly, but they loved the excitement of getting to try on the heart monitor, do the gripping and hear their heartbeats through the Doppler,” Webster said.

The students in each of three fifth-grade classes who attended the all-afternoon event received a token at each of the “stations” they visited — either a small toy or a piece of candy, Webster said.

But it’s hard to know who received the bigger gift, she said — the younger students who got a great lesson delivered by their older peers, the older students who gained hands-on experience in what might become their chosen career field, or the adults in the room who marveled over the exchanges and interactions between the two groups of students.

“It was Mr. Watkins who remarked about the younger kids: ‘Just look at their eyes. They’re holding onto every word’” from the older students, Webster said.

“You could see it in their eyes and in their participation,” she said, adding that it was extra exciting to see students who had been in her classroom just a few short years ago now speaking with ease and confidence about complicated subjects.

The afternoon was a “trial run,” of sorts, the first time the HOSA group has taken its show on the road, Webster said, but repeats seem likely, based on the program’s success.

She added that it was a great way to expose the younger children early to the potential health careers that could await them.

“In our setting, they may have never even thought about that before,” she said.

Durkee did acknowledge having lost a grip-strength competition to Beard, but she said the event’s positives far outweighed that defeat.

“It was so fun,” she said. “It was fun to participate but even more fun to see the interaction between the high school students and the little ones.

“And of course that’s what we’re trying to promote, that continuity,” she said.

Durkee said she was proud of how the high school students “were articulating body systems and how the body’s supposed to work.”

“It was amazing how well our students were able to articulate those things to our fifth-grade students.”

The online crowdfunding platform will help increase potential donors to support projects submitted by teachers in the district.

The Billie A. Hall Post 17 in Sand Springs is partnering with Wreaths Across America to decorate more than 1,500 veterans graves at Woodland Memorial Park, but they need the community's help to buy the wreaths.

Weekend to feature Boo (and moo) at Case Community Park

The annual trick-or-treat extravaganza is from 3 to 5 p.m. Sunday, with plenty of other fun to be had in the park, as well.

A grant from the Christopher and Dana Reeve Foundation will help special-needs clients of the American Therapeutic Riding Center in Sand Springs take the reins toward independence and health.

School health officials had been preparing for a "spike" in COVID cases when students returned from fall break, but so far, at least, the increase seems to be more of a "blip."

“Puffs, or Seven Increasingly Eventful Years at a Certain School of Magic and Magic,” is a comedic retelling of the Harry Potter book series told from the perspective of the “Puffs.”