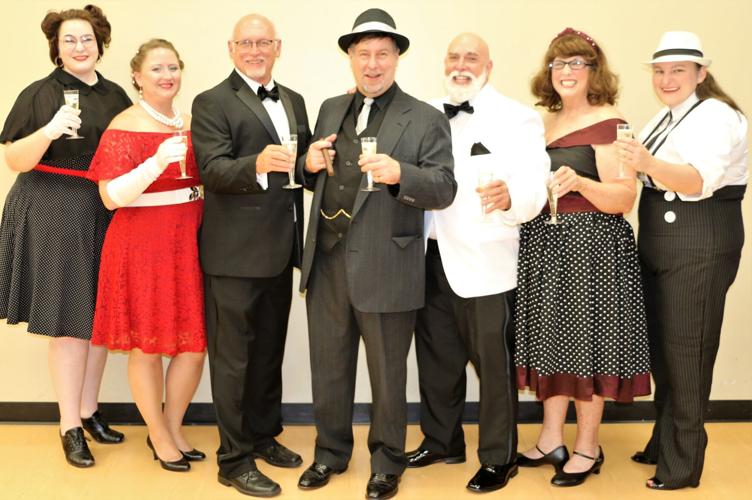 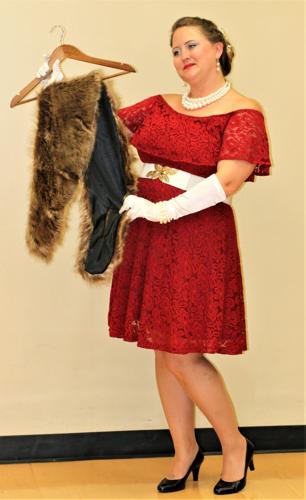 It won’t be just some garden-variety killing when the lead singer of The Loyal Geraniums is found dead on New Year’s Eve, the victim of a “Murder at Midnight.”

Attendees at the annual murder-mystery dinner put on by the Sertoma Club and Women’s Chamber of Commerce are going to be planted firmly in their seats, eager to root out any clues from the array of potential suspects.

In its 15th year, the interactive theater fundraiser includes guest participation to help solve the murder of the band’s lead singer.

Is the killer Roxy Romano, owner of Chicago’s The Pitz nightclub and a former dancer, or perhaps Giovanni Fishi, a reputed mob boss who runs a successful string of dry-cleaning shops?

Maybe it’s band leader Lou Gumbardo, or Mary Rose Looney, a songstress wanting to leave the band and start her own musical career, or Betty “Boom Boom” Baxter, a drummer famous for her talent in making percussion come alive — and sometimes drowning out the rest of the band.

Tony “Ivory” Ivanski, the pianist who can tickle the keys, might be good with weapons, but Shirley Fedora, the hat-check girl, knows everyone’s secrets — as well as what their coat and hat look like.

Of course, Richmond Dalley, the mayor of the Windy City, has been running things for more than two decades.

Special Treasury Agent Marriott Mess and Detective Peggy Agent will lead the investigation and will need every bit of help the audience can give them to interrogate each suspect, study evidence and examine the crime scene.

In this 1950s-themed production, not even the actors know who the killer is; he or she will be revealed at the end of the night.

Event coordinator Sue Price, who also performs in the show, says the murder mystery is a popular event each year in Sand Springs.

“The feedback I get is, ‘This is so much fun!’” she said. “‘Fun’ seems like such a tiny word for the actual experience it brings to the audience and actors.”

Tickets sell out most years, she said, adding that the production is on track to do so again this year.

Seeing as how the murder takes place on New Year’s Eve at a Chicago nightclub, it should be no surprise that the actors will be in their swankiest duds, but much of the audience might be, too.

“Every year I am happily surprised at the number of people who dress up in theme costumes,” Price said. “Last year it was a Mardi Gras murder mystery,” and more audience members dressed up than didn’t.”

Price said this year’s production’s being the 15th murder mystery dinner “is really special to me,” adding that each guest will receive a surprise gift to be used throughout the celebratory evening.

That’s in addition to the 10 door prizes plus a variety of silent auction items and baskets featuring cooking and baking, gardening, kids’ crafts and toys, mystery and family games, picnic and barbecue, seasonal decorations, jewelry, gift certificates, and college-themed items, among others.

But don’t worry for a second that the guests are having all the fun.

Jen Burke is the senior actor in the group, having acted in 13 of the 15 performances.

“Getting to play pretend for two hours is so much fun,” she said. “Everybody’s just there to have a good time.

“It’s not as stressful as, say, live theater, where you have to memorize lines and there’s so much extra work,” Burke said. “This is four weeks of fun rehearsal, and then you just go and you have a blast.”

Burke said the actors are given a written speech to memorize and then have “character sheets” that basically tell the actors their characters’ life stories.

“As long as we stay within the parameters of that, we’re able to ad-lib as much as we want,” she said.

And how often does someone ask a question the actors haven’t prepared for?

“Every single time,” she said. “That’s part of the fun of it, too. Occasionally we have to ‘break character’ to check our notes, and the audience gets a kick out of that, too.”

Burke has been the murderer twice in all these years, and she’s wondering whether this year’s show will bring her total to three.

Her character, Shirley Fedora, is the coat-check girl, who is in the perfect position to listen to everything that’s going on as people are coming and going.

The Sand Springs Women’s Chamber of Commerce works to advance literacy through charitable and community programs, including tutoring students and adults in reading, raising funds for Sand Springs Public Schools and providing funding and books for the Little Red Library boxes throughout the city.

The primary focus of the nonprofit Sertoma Club is communication — helping people with speech, hearing and language disabilities. Sand Springs Sertoma fundraisers contribute to the Sertoma Handicap Opportunity Program, to the calibration of Sand Springs Public Schools’ audiometer, and to a Charles Page High School scholarship.

Tickets: $45 per person; tickets are limited, and they must be purchased by Aug. 15.

Dress: Trophies will be awarded to the best 1950s-style formal costumes.

Sand Springs district leaders say they're working hard to create a culture where educators want to be. #oklaed

From Charles Page to Carnegie Hall: Chorale's conductor shares story of massacre with audiences far and near

Sean Baugh found his voice in high school in Sand Springs 30 years ago. Now he uses it to try to change the world, one song at a time.

Hall, who has been the city's fire chief only since last fall, has accepted a job in the private sector.

Letter to the Editor: 'It's good to know there's a bright spot here'

The seven-day average of new COVID-19 cases and the number of new weekly cases both declined in Oklahoma for the first time in four months.

The cafe, which is expected to open in 2023 in the Sheffield Crossing area, features healthy eating options in the form of smoothies, wraps, sandwiches and flatbreads.

The Sand Springs manufacturer's gift to the nature preserve was 53 years in the making.

Annual Sand Springs murder mystery is ripe for the solving

The killing of the Geraniums' lead singer is fertile ground for local sleuths.