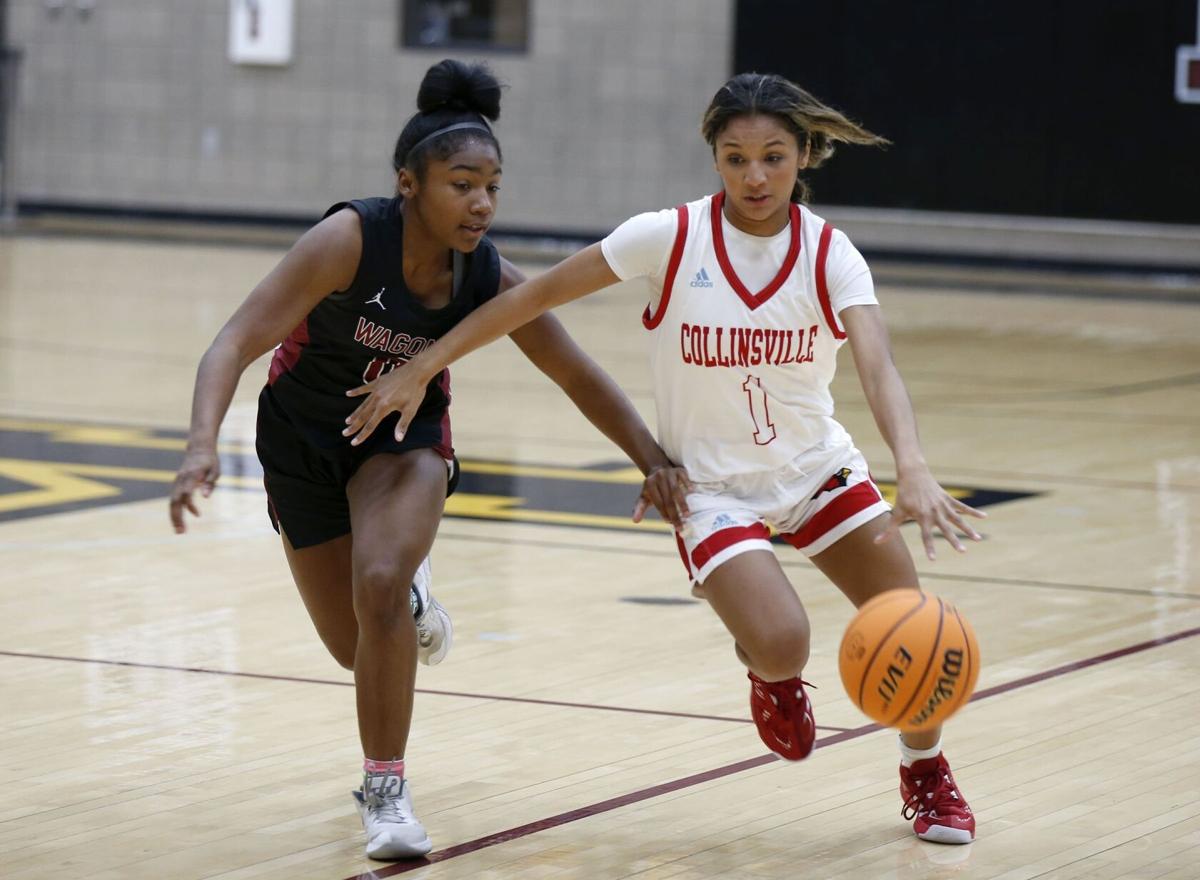 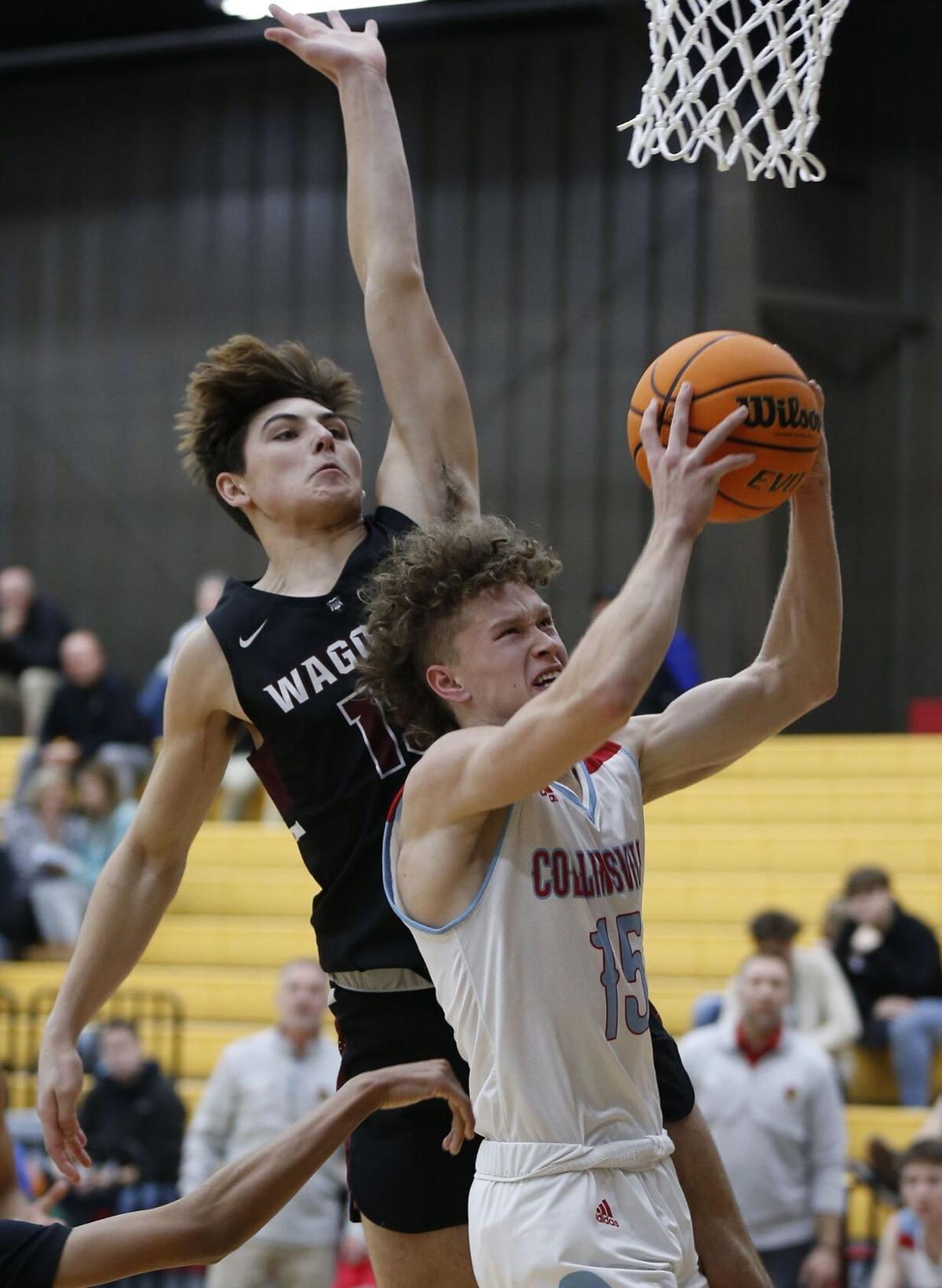 Collinsville’s basketball teams are off to a strong start on the 2022 portion of their schedules.

Each went 3-1 in the opening week and finished third in the Lincoln Christian Winter Classic.

In the third-place games Saturday, Jacob Scyrkels scored a career-high 38 points in a 79-57 victory over Edison in a matchup of Class 5A top-10 teams after Collinsville’s girls rallied past Stilwell 61-54.

Scyrkels was an all-tournament selection. Cooper McDowell and Oscar Hammond also finished in double figures for Collinsville (9-2) with 14 and 11 points, respectively. Jay Overton-Tobie paced the Eagles (8-5) with 13 points.

Collinsville was ahead 31-25 at the half, but took control with a blistering start from the floor in the third quarter.

The Cards made their first six shots of the frame, including a trio of 3-pointers from McDowell. They eventually led 58-41 after three periods and were never seriously threatened in the final stanza.

“I was very pleased with our character and our competitive nature,” Collinsville coach Todd Anderson said. “Our guard play has been really solid and our length on defense gives people problems.”

Collinsville beat Glenpool 84-38 last Tuesday and then got past Wagoner 54-38 in the opening round at Lincoln on Thursday.

In the semifinals Friday, the Cardinals dropped a hard-fought contest against Stilwell 56-52. They rebounded quickly though, thanks to Scyrkels and company.

In the girls’ game, the Cardinals (7-4) had four players with at least 10 points, including a game-high 17 points from all tournament selection Brie Smith.

“Makayla is not really known as a scorer, but she made a couple of big shots,” Collinsville coach Janson Hightower said. “We had good balance tonight.”

Stamper followed with a steal near her own free throw line that she took the rest of the way for a layup 30 seconds after the trey from Meadows.

Smith then got a conventional 3-point play with 3:46 remaining. Stilwell got no closer than four points the rest of the way.

Hightower, in his first season as the coach of the Lady Cardinals, is very pleased with the progress and maturity of his team.

“They are growing up,” Hightower said. “They are sharing the ball well and really taking to our coaching.”

Collinsville had wins of 56-41 at Glenpool this past Tuesday and 60-53 over Wagoner on Thursday in the opening round at Lincoln Christian. In the Wagoner game, Liz Thomas’s driving basket snapped the tie with 1:25 remaining. Four players combined to sink 9-of-10 free throws in the final 51 seconds to seal the win for Collinsville.

The Lady Cards then fell 66-43 to defending Class 5A state champion Sapulpa on Friday.

Both Collinsville teams will host Coweta on Tuesday and visit Grove on Friday.

Owasso will host Bartlesville on Tuesday and Booker T. Washington on Friday.

According to the AFCA, coaches who receive this award are recognized for their impact on their team, as well as the legacy they leave with the school and surrounding community.

Owasso’s Caden Fry joined an impressive group when he was the 56th annual Tournament of Champions’ leading scorer.

Tristan Profit, who was diagnosed with glaucoma last year, said that ultimately he will lose his vision entirely. But rather than dwell on it, he tries to look for opportunities to help others.