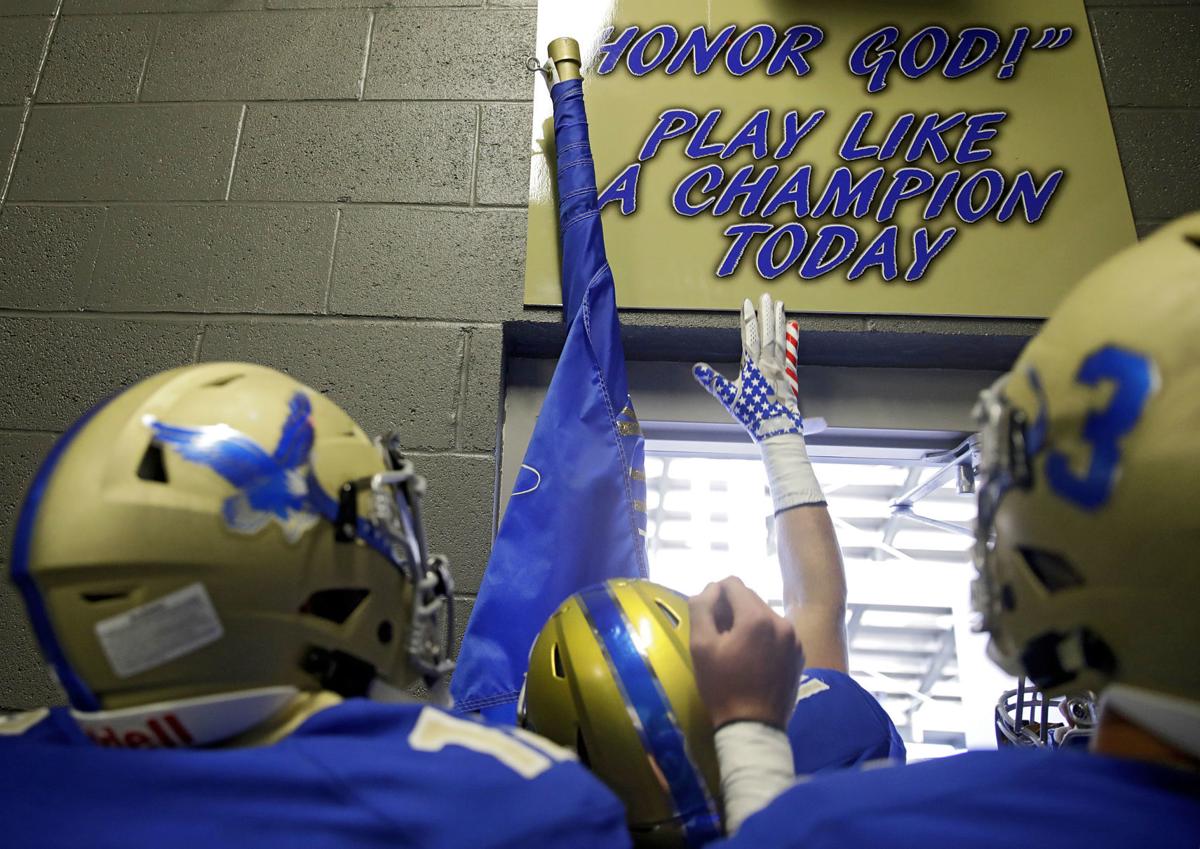 Rejoice Christian has a 26-2 record over the past two seasons. The Eagles will try their fortunes in Class 2A beginning in 2020. MIKE SIMONS/Tulsa World 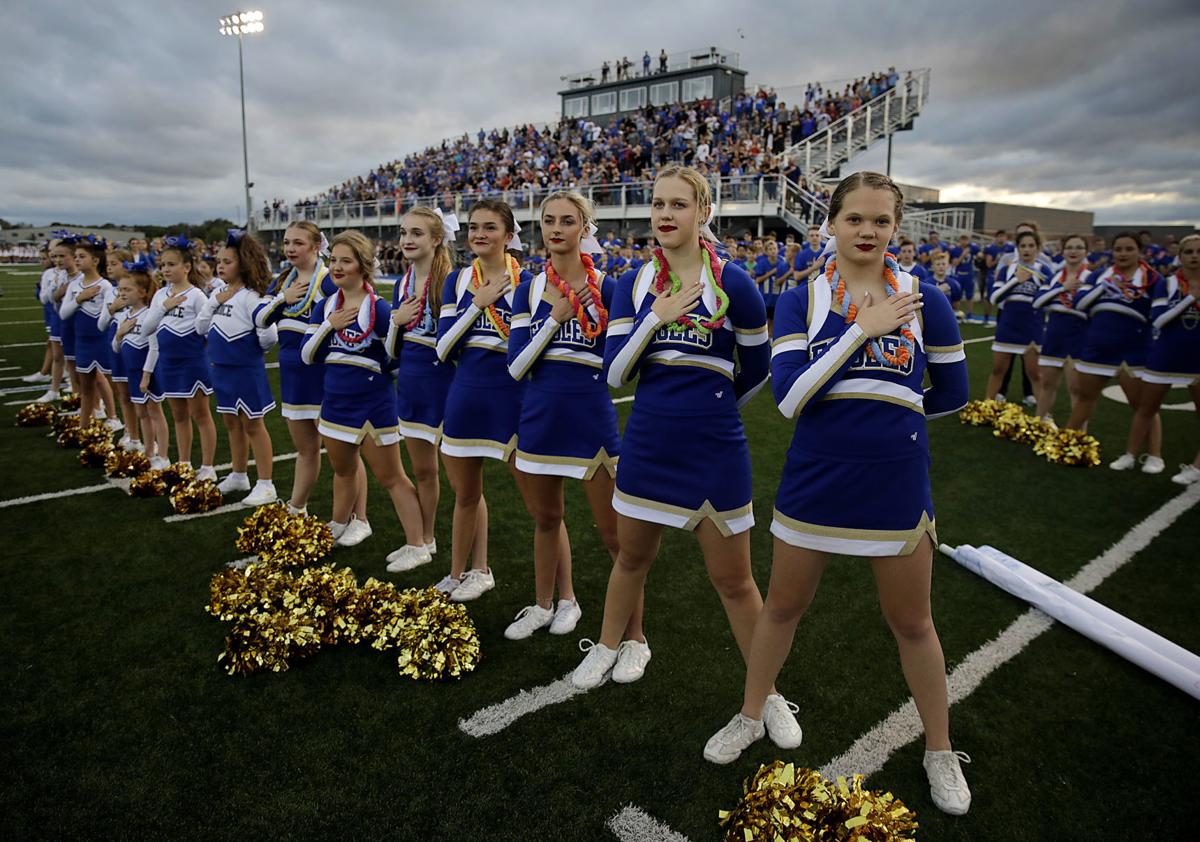 Crafting an entire season’s worth of games is often a time-consuming task for any football coach.

Add in the unknown element of what classification Rejoice Christian would land in as of early December, prior to the Oklahoma Secondary Schools Activities Association approval of the latest ADM numbers for the 2020-21 seasons, and coach Brent Marley was thrust into a scramble mode unlike anything he had faced in his five seasons with the Eagles.

“I don’t know that it’s ever been this challenging,” Marley said about putting together Rejoice’s 2020 schedule.

The story actually began prior to the 2019 season.

Marley believed it could be the last year his Eagles would be in Class A, due to the OSSAA’s private school rule. The rule requires a program to move up in one classification if it advances to the quarterfinal round of the playoffs or beyond three times within a five-year span. Rejoice advanced to the quarterfinals in 2015, Marley’s first season, and was a semifinal participant in 2018. When the Eagles repeated that success with another semifinal run this past season, Marley was under the impression his team would be in 2A in 2020.

However, with ADM (average daily membership) numbers turned in prior to the playoffs, Rejoice’s most recent success would not be a factor for the next two-year district assignments. There appeared to be more good news when just a couple of days after the Eagles football season ended, Rejoice looked like it would remain in the same classification as preliminary ADM numbers showed the Eagles were not large enough to be join 2A.

Plans were even beginning to take shape with regards to who would join Rejoice in its new Class A district. Wellston, Stroud, Mounds, Liberty, Summit Christian, Chouteau and Chelsea were part of the initial district proposal.

“For about three days, we were the largest Class A school,” Marley said.

Those plans went awry when the OSSAA announced the official ADM numbers on Dec. 11. Rejoice’s ADM of 214 was no longer the largest in Class A. It was the 64th and smallest school in 2A.

Along with the move up in classification against larger schools, an initial proposal had the Eagles in a district with state finalist Vian along with traditional powers Cascia Hall and Spiro as well as Heavener, Panama, Pocola and Roland.

But that proposal changed as well. Instead, Rejoice will be part of a District 2A-8 which will include powers Adair and Sperry, along with Claremore Sequoyah, Dewey, Kansas, Nowata and Salina. The slate certainly figures to test the mettle of an Eagle program that has lost just four district games since joining the OSSAA in 2012.

“Not that we don’t expect to be successful and do well, but you are going up a class,” Marley said. “So you’re going to be trading punches more often.”

In addition to Rejoice’s ever-changing fate with regard to its district scheduling, the Eagles were also starting from scratch with their non-district slate.

Crossings Christian and Kiefer, who had become staples on Rejoice’s early-season schedule since it first joined 11-man football in 2014, both decided to drop the Eagles. And Haskell was a two-year deal which was discontinued as well.

“Scheduling has been tough because normally your non-conference games are staples,” Marley said.

In their place, Rejoice will open the season on week 0 for the first time when it hosts Cashion, a Class A state finalist a year ago. The Eagles then host Beggs in week 1, followed by a bye then will travel to Luther for their final non-district game. Beggs advanced to the 2A semifinals last season while Luther was a second-round playoff qualifier in 2A as well.

Marley said the overhauled non-district schedule was partly due to Rejoice’s past success.

The Eagles, who host winless Nowata on Thursday, improved to 5-1 overall and 3-0 in 2A-8 and now sit in a first-place tie with Adair. Claremore Sequoyah fell to 4-2 and 2-1.

Once Brayden Gilkey shifted into high gear, there was no stopping the Collinsville senior running back.

Owasso's volleyball team is one week away from the postseason. If the Lady Rams retain their No. 8 state ranking, they will host a regional beginning next week.

Campbell Rinke with Owasso Pom answers some fun questions about her time on the Rams squad.

Owasso’s softball team is miles ahead of where it was last year entering the postseason.

Rejoice Christian has a 26-2 record over the past two seasons. The Eagles will try their fortunes in Class 2A beginning in 2020. MIKE SIMONS/Tulsa World