Oklahoma pitcher David Sandlin, an Owasso High School graduate, has had a strong postseason for the Sooners. 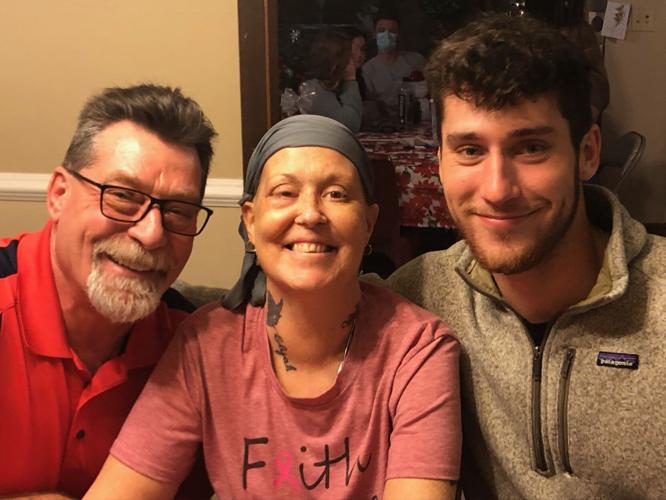 Holli Sandlin (center), the older sister of Oklahoma pitcher David Sandlin (right) and daughter of Bill Sandlin (left), died on May 23 after a battle with cancer. 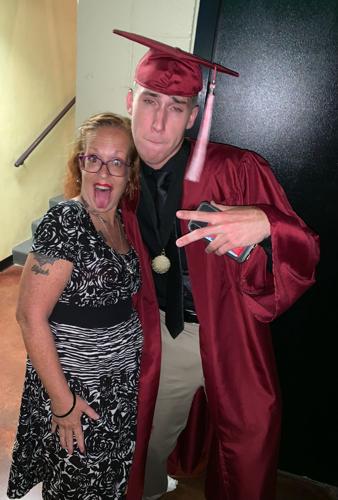 David Sandlin, shown with his older sister Holli after his Owasso High School graduation in 2019, remembers her through her TikTok account. 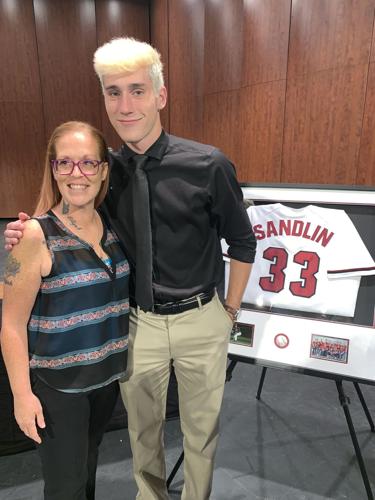 David Sandlin and Holly Sandlin at the Owasso baseball banquet following the 2018 season.

David Sandlin always has the TikTok videos of his older sister to make him smile.

Last month, cancer took Holli Sandlin from her family at the age of 45.

David, part of the Oklahoma Sooners’ pitching staff, will face tough battles at the Men’s College World Series this week, but they will pale in comparison to the fight that Holli battled every day.

“My phone wouldn’t have stopped ringing,” David Sandlin said when asked what his sister would be like this week. “She would be just absolutely thrilled and, if possible, would have been the first one to buy a ticket to Omaha and cheering louder than anybody in that stadium.”

Holli died on May 23, the Monday before the Big 12 Tournament. Since then, David, a redshirt sophomore right-hander, has had a strong postseason.

She continues to be his inspiration, just as she had been his entire life.

“No matter what sport I grew up playing, she would always try to come to my games,” Sandlin said. “She would text me and would tell me that I was her hero. But it was the other way around after seeing what she persevered through.”

Holli made plenty of TikTok videos chronicling her fight versus cancer. There also are many of her displaying her personality.

“Some of them are funny,” Holli’s stepmom, Jan, said with a slight chuckle. “Some are like ‘oh my gosh, Holli, really?’ She loved it. It kept her spirits up and kept her laughing. She loved to dance on the TikToks. She loved to make people laugh and dance all the time.”

Those dancing videos are what make David smile.

“It’s awesome. It’s great getting to go back and seeing her,” he said. “It represents her perfectly with all the stuff and just goofing around. It was exactly what she was like.

“(His favorites) are just the ones where she’s dancing and just cracking up.”

Sandlin was a late bloomer, hitting a growth spurt between his junior and senior years at Owasso. There weren’t many scholarship offers, but he found a home at Eastern after his 2019 high school graduation.

“(Playing at Owasso) made all the different in the world,” said Sandlin, who didn’t play regularly until his final season. “I got to face guys in high school like (former Bixby and current Oklahoma star) Jake Bennett.

“Then I had guys on my team like Connor Beichler at ORU and Sam Thompson at TCU. We had Power 5 guys all across the board in that region up there. So it made all the difference to get that exposure early on.”

OU coach Skip Johnson has made things easy for Sandlin, who says he started developing more focus toward the end of the regular season. The right-hander concentrates on throwing to a spot and if it’s hit, it’s hit.

“At times, it could be pretty difficult to not get over-hyped and everything,” Sandlin said. “But when you simplify, it’s just execution. Don’t try to strike people out. Just throw into contact and let your defense do the work. Guys in Major League Baseball will fail seven out of 10 times and still be a Hall-of Famer.”

Bill Sandlin has been watching his son throw but stopped catching his bullpens when David started throwing around 85 miles an hour.

“I did everything I could to support him. I built him a pitcher’s mound and supported him that way. But just to watch him grow, he’s doing everything on his own,” Bill Sandlin said.

“I know he is harder on himself more than anybody else does. He wears his emotions on his sleeve a lot, but I couldn’t be more proud of him.”

As David Sandlin prepares for the biggest start of his career, what’s his father’s advice for Omaha?

“Be humble. The game can come up and bite you really quick,” Bill Sandlin said. “Play it the way you want to play it. It’s your game. When you’re on the mound, you are in control. You control the tempo and you go with what makes you feel good.

Sandlin didn’t play until his senior season at Owasso and turned into a college star at Eastern Oklahoma State College and this season at OU.

King had an assist on the first goal.

Oklahoma pitcher David Sandlin, an Owasso High School graduate, has had a strong postseason for the Sooners.

Holli Sandlin (center), the older sister of Oklahoma pitcher David Sandlin (right) and daughter of Bill Sandlin (left), died on May 23 after a battle with cancer.

David Sandlin, shown with his older sister Holli after his Owasso High School graduation in 2019, remembers her through her TikTok account.

David Sandlin and Holly Sandlin at the Owasso baseball banquet following the 2018 season.