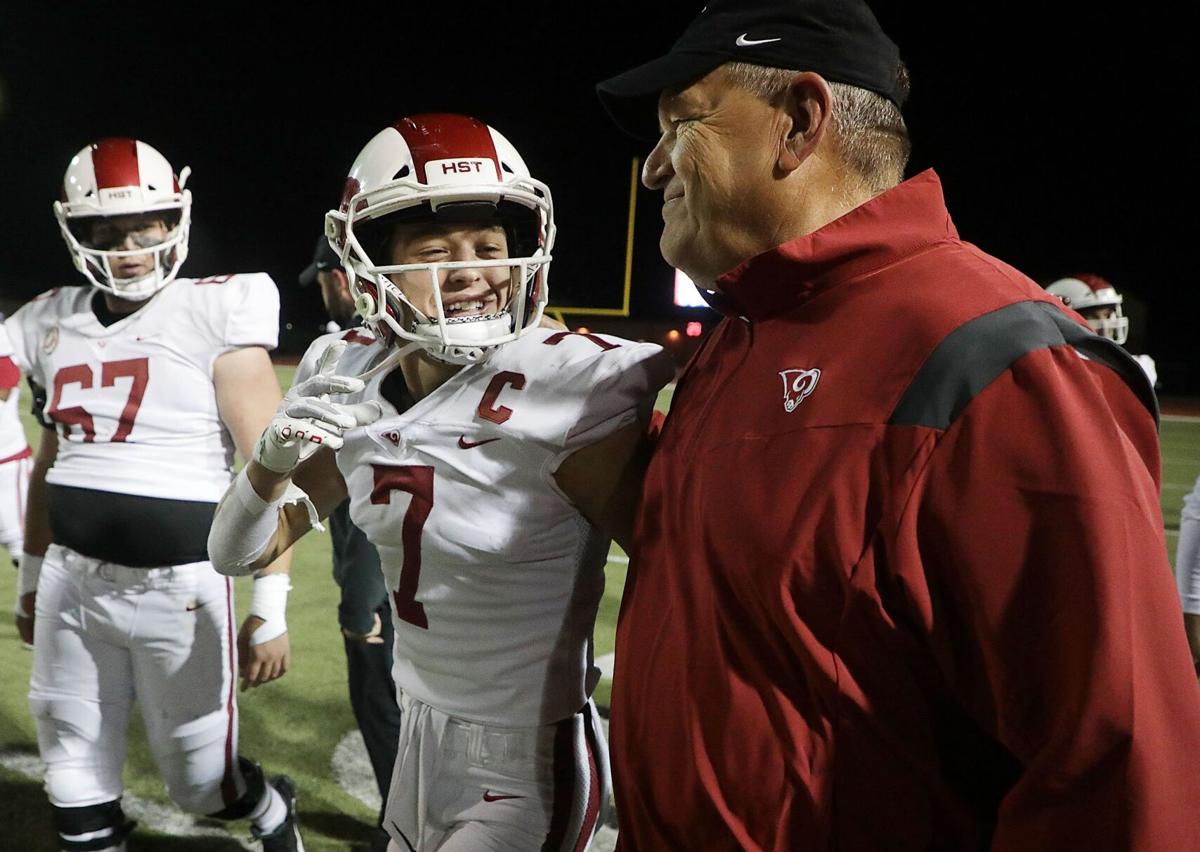 Owasso’s Cole Adams and coach Bill Blankenship congratulate each other after a victory over Moore in Week 9. 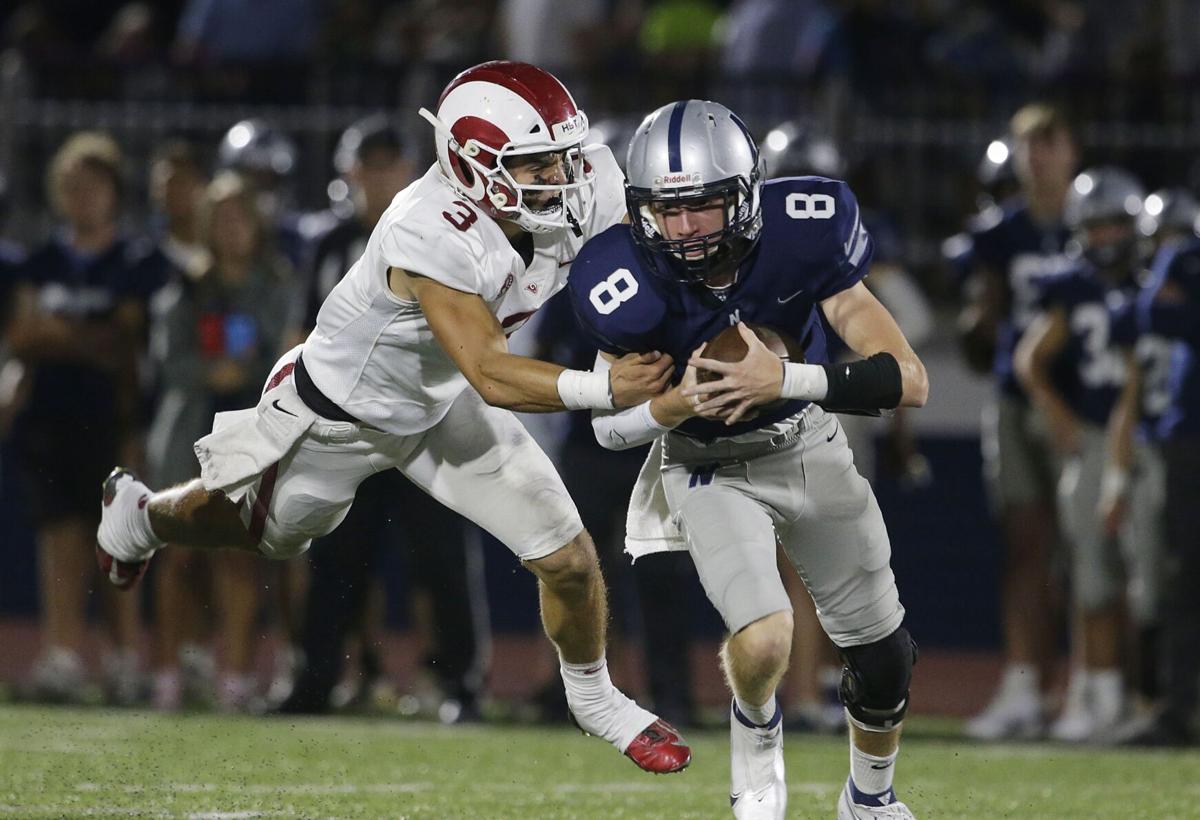 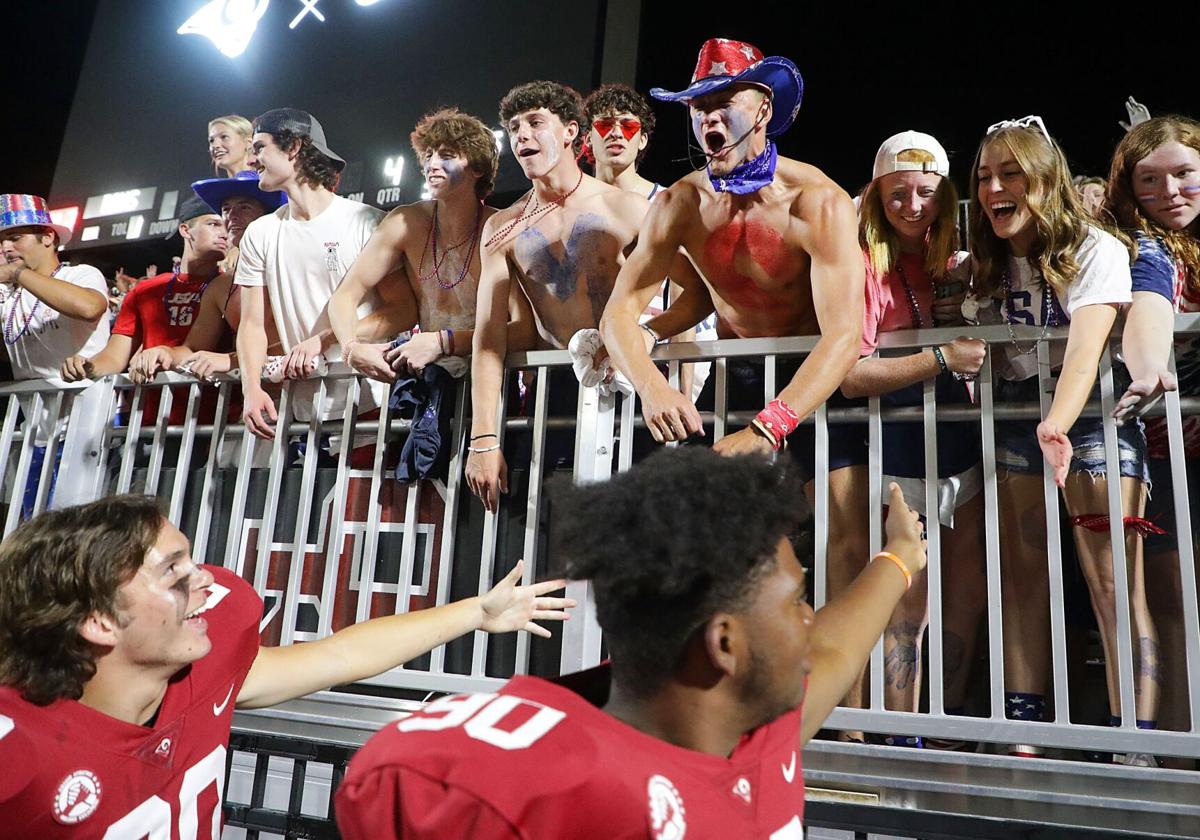 A high point of the season for Owasso was a 42-3 victory over Broken Arrow that improved the Rams' record to 3-0 on Sept. 10. Landon Crawford (20) and Chris Turner (90) celebrate that win with the student section.

For the first time in Bill Blankenship’s five seasons as Owasso’s head football coach, the Rams weren’t practicing or playing in the week before Thanksgiving.

That game was a microcosm of the Rams’ roller-coaster season. At times, Owasso looked to be the team that was regarded by many experts and fans during the preseason to be the favorite for a third state title under Blankenship. During a 32-minute stretch, Owasso outscored Broken Arrow 40-13. But Broken Arrow scored the first and last two touchdowns to come away with the victory — two months after Owasso defeated the Tigers 42-3 on Sept. 10.

In the end, the Rams’ lack of consistency proved costly.

There can often be a fine line between meeting expectations or falling short and that was the case with the Rams in their 8-3 season. The three losses were by a combined 10 points.

In all three losses, Owasso had the ball late in the game with a chance to win. In the district opener at Union, the Rams missed a 44-yard field goal at the end of regulation. Another missed field goal off an upright in overtime led to Union winning 10-7. It was Owasso’s first regular-season loss since 2018.

The most stunning loss, however, came in Week 8 when the Rams fell at home, 47-41 to Mustang, which lost to two non-playoff teams this year. Mustang went on a 33-0 run during the middle of the game. Owasso finished with four of the final five TDs and had a chance to complete the comeback at the end, but Jacobe Johnson’s end-zone interception with 1:11 left — the Rams’ sixth turnover on Senior Night — saved Mustang’s upset.

As a result of that loss, the Tigers had to visit a hot Broken Arrow team for the quarterfinals instead of hosting Edmond Santa Fe. The Rams and Tigers each scored six TDs, but a pair of missed 2-point conversions ultimately doomed Owasso. The Rams’ final drive reached the Tigers’ 32 before derailing with four incomplete passes.

Owasso junior quarterbacks Austin Havens and Mason Willingham each showed flashes of brilliance as they combined to pass for 3,120 yards and 33 TDs. Willingham also had seven rushing TDs.

Cole Adams, a junior with eight major college offers, led a stellar receiving corps with 55 catches for 913 yards and eight TDs. Kelan Carney had 48 catches for 748 yards and 10 touchdowns, Ronnie Thomas Jr. had 37 receptions for 791 yards and 11 TDs, and JaRay Austin had 21 catches for 476 yards and four TDs. Adams had 1,457 all-purpose yards as he showed his versatility again by throwing for a TD, rushing for a TD and then capped his season with two TD kickoff returns against Broken Arrow.

The Rams opened the season with an impressive 45-22 win over last year’s 6AI runner-up, Edmond Santa Fe, as Havens threw for five TDs, including three to Carney. However, the following week’s 48-42 win over Fayetteville proved to be a preview of potential problems before a muffed punt saved Owasso from letting a big lead slip away in the final moments. But things seemed to be back on track with the 42-3 win over Broken Arrow that gave the Rams a 3-0 record.

Owasso responded from the Union loss with a 70-28 win over Norman North in Week 5 as Thomas had three TD catches, but even that game was a roller-coaster as the Rams trailed 28-21 before scoring the final seven TDs.

Owasso produced at least 40 points in every game, except the 10-7 overtime loss against Union.

The Rams’ defense dominated at time but overall lacked the big plays that it often came up during their 2020 regular season when Gage Laney had 11 interceptions. This year, Owasso’s defense only picked off nine passes and couldn’t up with a big stop in the fourth quarter when it gave up three TDs in the one-point loss that ended the season sooner than expected at Broken Arrow.

McAlester is 3-0 against Collinsville and won the only previous postseason matchup, 29-9 in a 2012 5A first-round game.

Collinsville claims 5A football championship with 42-35 win over McAlester

Brayden Gilkey had 11 carries for 185 yards and four touchdowns to lead Collinsville past Shawnee 60-14 at Sallee Field.

Owasso’s Cole Adams and coach Bill Blankenship congratulate each other after a victory over Moore in Week 9.

A high point of the season for Owasso was a 42-3 victory over Broken Arrow that improved the Rams' record to 3-0 on Sept. 10. Landon Crawford (20) and Chris Turner (90) celebrate that win with the student section.