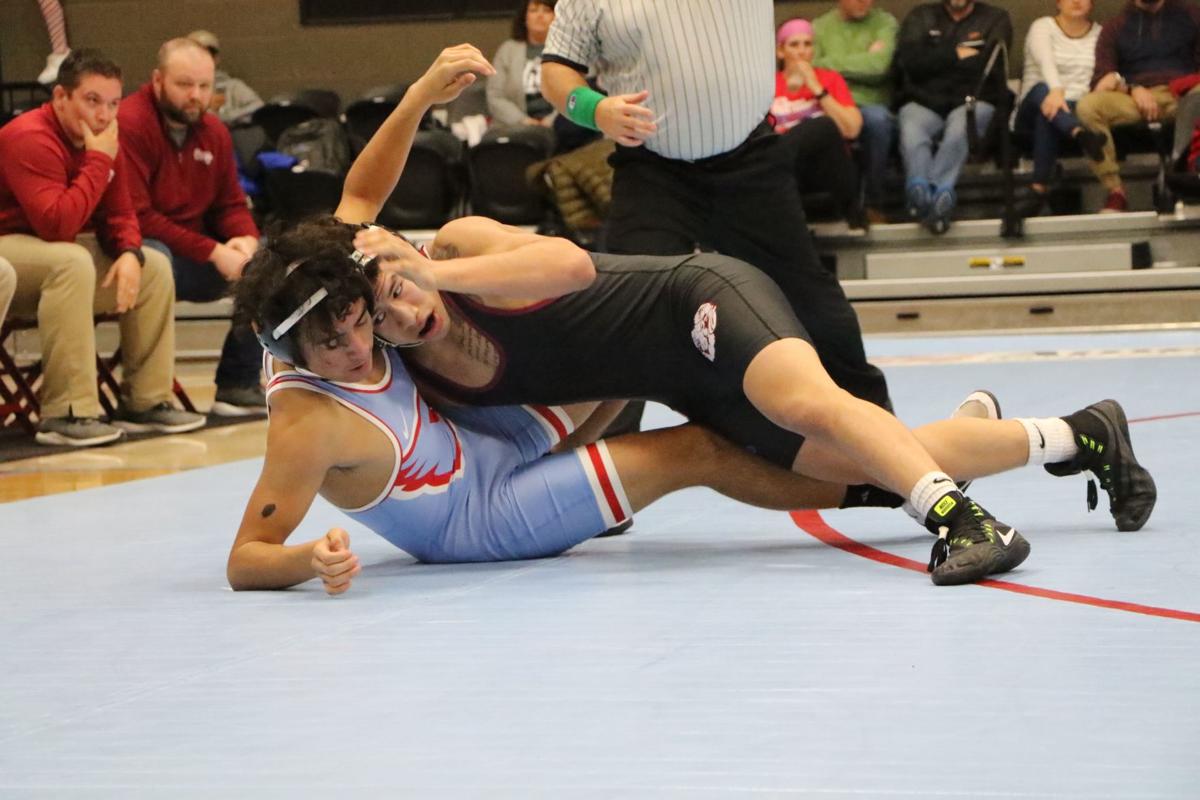 Collinsville’s Clay Montes (left) wrestles Zeke Washington of Owasso in the 138-pound match Tuesday during a dual at Collinsville. 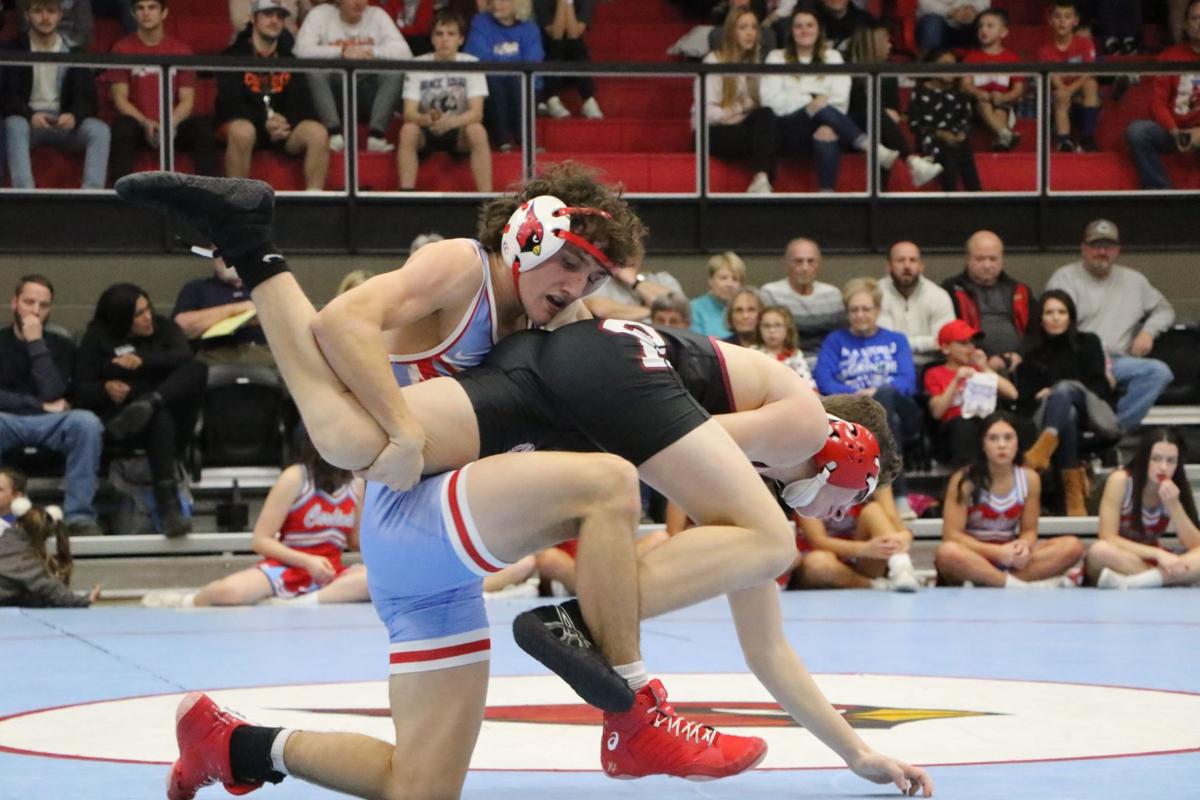 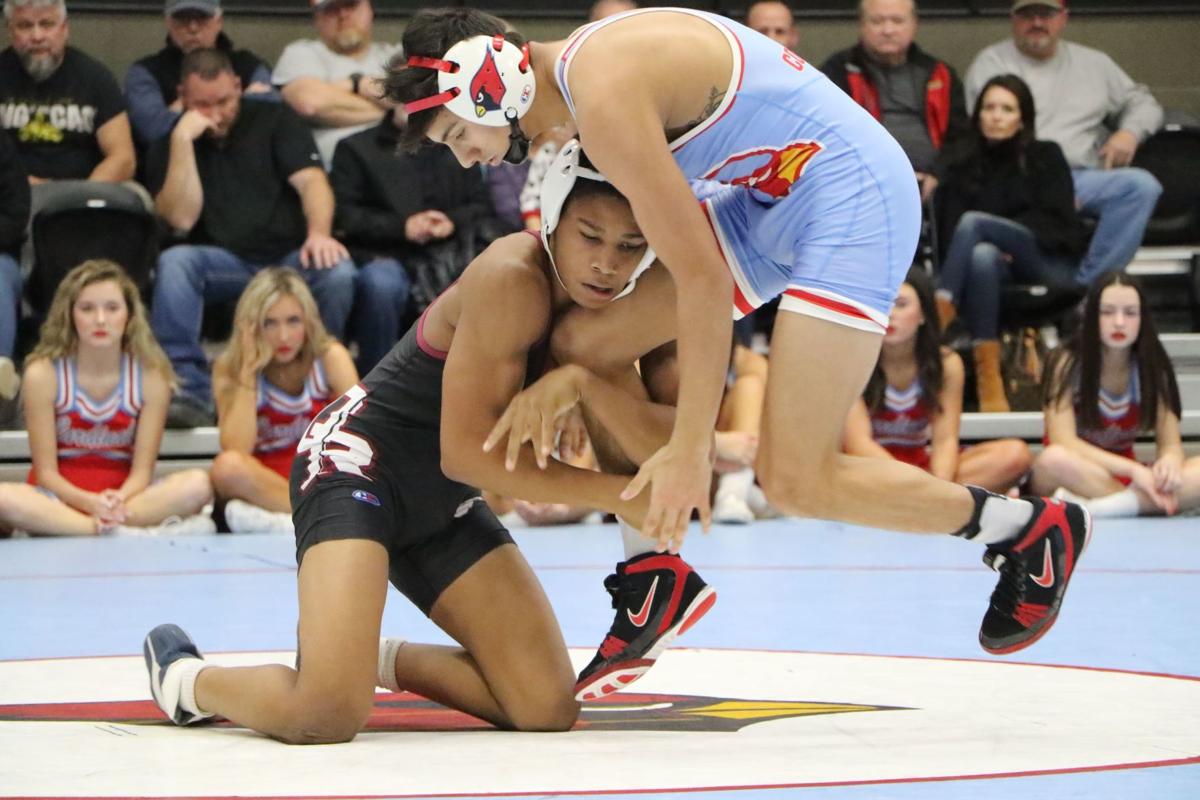 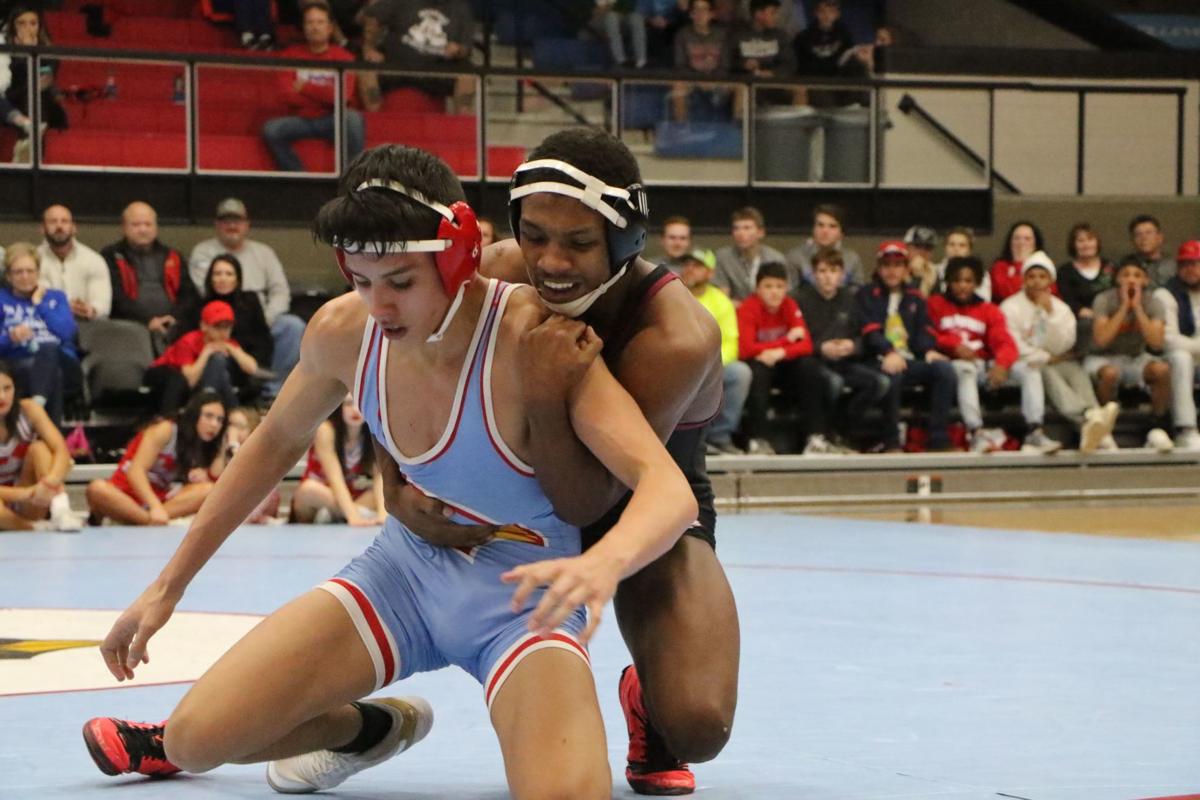 Collinsville’s Wyatt Hartley (left) and DJ Anderson of Owasso wrestle in a 145-pound match during Tuesday’s dual at Collinsville.

COLLINSVILLE – The No. 2-ranked wrestling squad in Class 5A looked like it would stroll to a dual win at home. But just as quickly as Collinsville got out of the gate, Owasso chased down the Cardinals.

Collinsville won the first four contested matches and led 25-0 before Owasso rallied for victories in six of the next seven. It wasn’t until Cardinals sophomore Zack Morris pulled out a win at 220 pounds that clinched the dual for Collinsville by a 34-27 verdict.

“I knew (Owasso coach Mike Ryan) would have them ready to wrestle,” said Collinsville coach Wes Harding. “They wrestled with more energy than we had.”

The Rams, already battled tested from duals against 6A powers Broken Arrow and Sand Springs, showed their grit against the tradition-rich Cardinals as they won four matches by two points or less. Owasso went on to win half of the 12 contest matches in the dual.

“It was good to see some of our kids step up and compete like they did,” Ryan said.

After getting a forfeit at 106 to begin the dual, freshman Jordan Williams gave Collinsville a 10-0 lead with an 18-6 major decision. Rocky Stevens made a double-leg takedown midway through the third period standup in a 6-5 decision over Owasso freshman EJ Tecson at 120. Collinsville’s Eli Benham (126) and Caleb Tanner (132) followed with pins as the Cardinals led 25-0.

With Williams, a Fargo Cadet Nationals champion, along with Stephens and Tanner, both with state titles to their credit, Benham, a state finalist, said the lighter weights know they have a critical role in inspiring their Collinsville teammates.

“We try to set the tone in both our matches and the dual,” Benham said.

But the tide began to turn for the Rams when Zeke Washington got Owasso on the board at 138 with a first-period pin. DJ Anderson’s escape in the second period was enough to hold off Wyatt Hartley for a 1-0 win at 145. Owasso’s Mark Turner then got a takedown with 35 seconds left as he rallied from a 5-0 deficit for a 9-8 decision over Kolten Allphin at 152. Nate Jacobson pulled the Rams to within 25-15 with a decision win at 160.

Collinsville’s Hayden Knight slowed the Ram run with a pin within the first minute at 170, but Owasso’s Stephen Aycock notched a decision win at 182 and Scott Ghavami’s forfeit victory at 195 closed the gap to 31-24.

Morris saved the dual for the Cardinals he edged out Owasso’s Hilton Moseby, 5-4, in another down-to-the-wire match.

A relieved Harding admitted Tuesday’s dual was nothing, if not entertaining.

“It was a back-and-forth dual. I guess that’s great for selling tickets,” Harding said with a smile.

Chloe Wilkins and four other graduates of Owasso's soccer program helped the East sweep the West in the Class 6A games.

Force, who scored 36 goals in her career at Rejoice Christian, scored in the 76th minute after the West jumped to a 2-0 lead.

With Owasso athletics preparing for the upcoming school year that starts in August, it's time to take a look back at 2020-21.

Meet the finalists for All-World boys golfer of the year

Owasso's Ben Stoller is among the finalists. The winner will be announced at the fifth annual All-World Awards, presented by Bill Knight Automotive, on Tuesday, June 29, at Stoney Creek Hotel and Conference Center in Broken Arrow.

Cardinals excited to be preparing for 2021 football season

Six months after losing in the Class 5A semifinals, Collinsville players and coaches are excited to be back practicing for the upcoming season.

Collinsville’s Clay Montes (left) wrestles Zeke Washington of Owasso in the 138-pound match Tuesday during a dual at Collinsville.

Collinsville’s Wyatt Hartley (left) and DJ Anderson of Owasso wrestle in a 145-pound match during Tuesday’s dual at Collinsville.