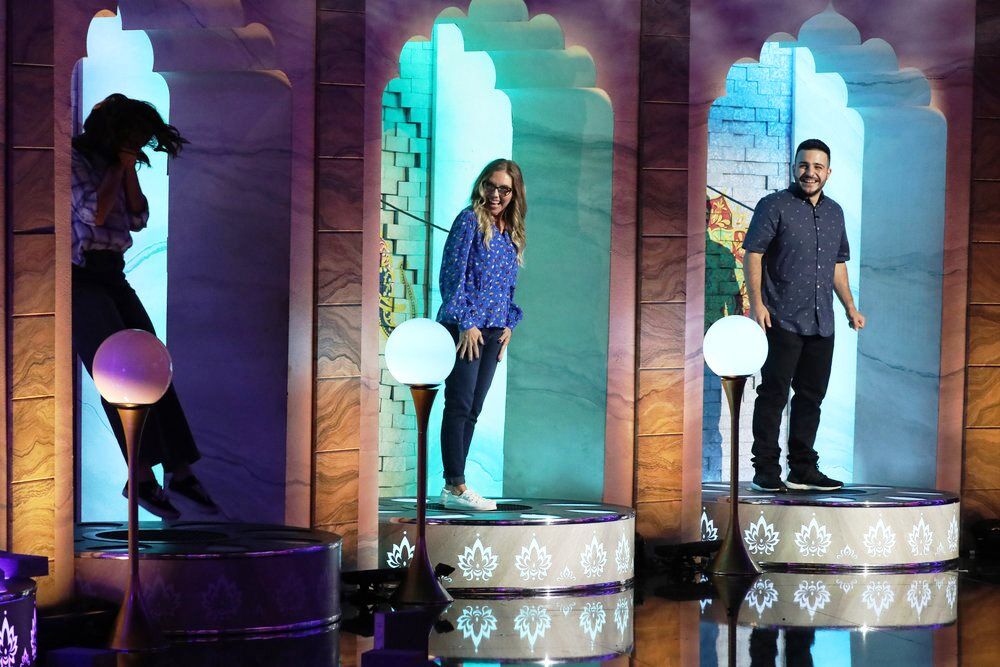 Owasso resident Laurel Molini (center) competes in the memory game Taj Mah-Wall on the second episode of the fourth season of “Ellen’s Game of Games,” aired on Oct. 13. 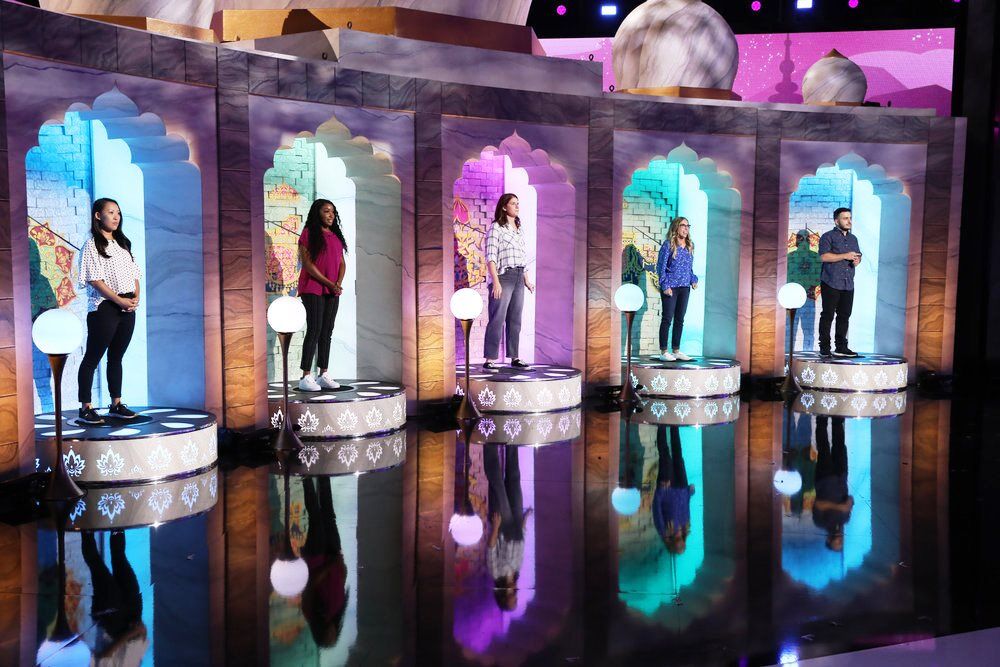 Laurel Molini (second from right) was the last person standing out of five contestants in the “Ellen’s Game of Games” Oct. 13 episode’s third round of four, in which she had to memorize a cluttered image and recall something she saw.

Laurel Molini recently survived plummeting 30 feet after being blasted through a brick wall.

The Owasso resident walked away unscathed, however, since her stunts were carried out in good fun on NBC’s primetime game show, “Ellen’s Game of Games.”

Molini starred on the second episode of the hit series’ fourth season, which aired on Oct. 13.

Contestants on the show, hosted by comedian and TV personality Ellen DeGeneres, must maneuver massive obstacles, answer questions under pressure and face plunges into the unknown — all for a large cash prize.

Earlier this year, Molini, whose family regularly enjoys watching game shows, took up an interest in participating in DeGeneres’ program after her sister encouraged her to apply to the show.

“(She) called me over the lockdown during the initial coronavirus pandemic and said, ‘Hey … this would be something you’d be great at,’” Molini said. “I’ve watched a few episodes, they’re family-friendly games, I thought they were funny.”

It wasn’t long until Molini submitted a headshot and brief personality profile online. A few months later, she took part in a Zoom interview with the show’s producers, but didn’t hear back from them with the good news until August.

“I was a little in shock, because that stuff doesn’t happen to me,” Molini said of the unexpected phone call. “I was super surprised … and excited.”

Molini took six days off from her job as a nurse practitioner at Arubah Community Clinic in Collinsville — which included time away from her husband of over 15 years and their three daughters — to star on her newfound favorite show.

Her “Game of Games” stage debut came in the episode’s third round of four called Taj Mah-Wall, in which she vied against four other contestants to study a cluttered image and recall something she saw. Those who guess incorrectly or let the time run out lose and are blasted through a brick wall behind them. To her luck, Molini was the last person standing (although DeGeneres still pulled her harness for fun).

“… This is the most contestants that play against each other at one given time, so in theory, you’re chances are only 20%,” she said. “I was able to come out on top that game by memorizing pictures.”

From there, she advanced to “Know or Go,” where she got an opportunity to compete against three new contestants atop a 30-foot-high tower in a quiz-based round. Those who answer DeGeneres’ questions incorrectly drop out of the game — quite literally through a trap door.

Molini answered her first question correctly, but couldn’t salvage her second, in which she incorrectly guessed the name of the building where the TV show “30 Rock” takes place.

“When I heard the show ‘30 Rock,’ immediately I just lost all of my knowledge, because I have never seen the show,” said Molini, whose question was prefaced with a misdirected statement that the Rock’s real name is Dwayne Johnson. “… I just panicked and I said, ‘Johnson building.’”

In hindsight, after landing safely in a large, foam pit at the bottom of the stage, Molini said she had time to reflect on her performance on the “Know or Go” platform, which stood as the second to last obstacle away from the coveted $100,000 winnings.

“Once I fell, I was sad … and I feel like if I would have stalled a little longer or calmly had reacted, I could have maybe figured out the answer,” she said. “However, I will say there was just a little bit of relief too: ‘I made it this far, and that’s better than getting out immediately.’”

When asked what it means for her to star on “Ellen’s Game of Games,” Molini simply replied, “It was cool to represent Owasso and Oklahoma on national television.”

Following her staged stunt work at Warner Bros. Studios in Burbank, California, Molini took to some of the Hollywood sights, including the Universal CityWalk, and made sure to purchase a handful of souvenirs to bring home to her family.

She didn’t meet DeGeneres personally, but her lively presence on the show apparently left a lasting impression on Executive Producer Noah Bonnett, who offered up a flattering remark in an emailed statement to Owasso Reporter.

“We invited Laurel to play on our show, not just because she’s a fan and has the guts to play the games, but our research suggests that players from Owasso make for great contestants!” Bonnett said.

Levi Cobbler, 20, was booked into the Tulsa County jail Thursday after a man was found dead in his Collinsville residence, police said.

Owasso has 346 active cases of COVID-19, as of Sunday, Nov. 29, the Oklahoma State Department of Health reports.

Thirty-six students in Owasso, and another 18 in Collinsville, will perform for statewide audiences as part of various All-State choir programs going into the new year.

Staff Sgt. Marshal Roberts, of Owasso, and Spc. Christopher Horton, of Collinsville, are currently pictured on the Gold Star Tree at the Oklahoma Historical Society.

The debut of the large sapling is a first for the downtown area since being rebranded into the burgeoning Redbud District over four years ago.

Staff at the local outreach hosted the inaugural fundraising event to help keep the shelves stocked at its facility amid the COVID-19 pandemic and upcoming holiday season.

As Owasso residents begin their holiday shopping, they can get a first look at the newly remodeled Walmart Supercenter in Owasso.

Owasso senior Nathaniel Frazier recently had the opportunity to construct three batting racks for wheelchair softball teams in Tulsa, South Carolina and Japan as part of his Eagle Scout project.

Owasso resident Laurel Molini (center) competes in the memory game Taj Mah-Wall on the second episode of the fourth season of “Ellen’s Game of Games,” aired on Oct. 13.

Laurel Molini (second from right) was the last person standing out of five contestants in the “Ellen’s Game of Games” Oct. 13 episode’s third round of four, in which she had to memorize a cluttered image and recall something she saw.